On February 18th, POSCO Center hosted an opening ceremony of “Café Oasia.” The café will be managed as a “Social Co-Op union”, jointly supported by POSCO and the Social Enterprise Support Network (SESNET). Jasmine Lee, the first immigrant from the South East Asian countries who has become a Member of the Korean Parliament, also attended the event. It has been approved to be the first “Korea Social Co-Op Union” by the Ministry of Employment and Labor. 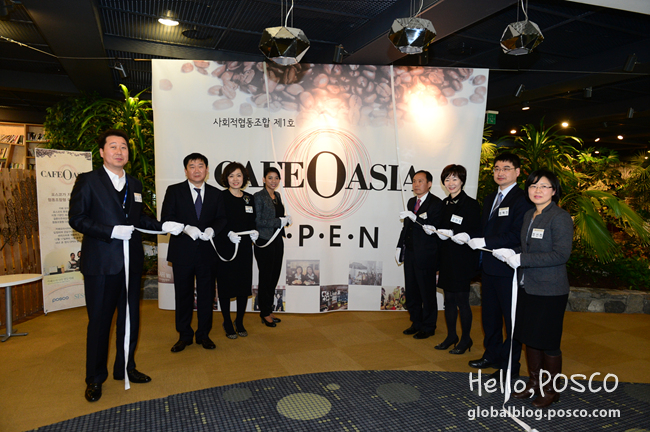 POSCO has always been an active patriot of social contribution to help create a healthy and supportive welfare community for all its residents throughout the world, including support for multi-cultural families’ safe integration and stable settlement into Korean society. With the ever growing multi-cultural families going in Korea today, POSCO believed it was necessary for them to give out a hand upon these issues. POSCO and SESNET have both agreed to launch the social co-op project as there are a growing number of demands from women, who had come to Korea for marriage establishing their own businesses but often facing difficulties against giant competitors.

You might wonder now, what is Café Oasia and what in the world is “Social Co-Op Union”? Well, let’s find out. 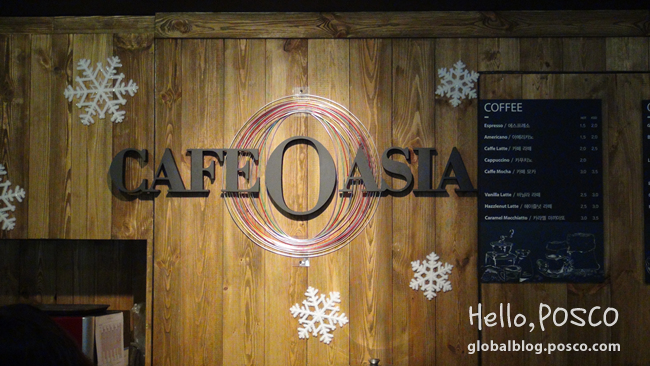 Café Oasia is a type of “Social Franchise” brand which is a collaboration of nine small cafes. This new brand was constituted last December under the fundamental law on co-op had gone effective. Café Oasia is a work wonder to all its guests—it’s a place of safe employment for foreign women, a café with affordable yet authentic coffee to customers, and an important stepping stone for small cafes to become independent with increasing sales rates. 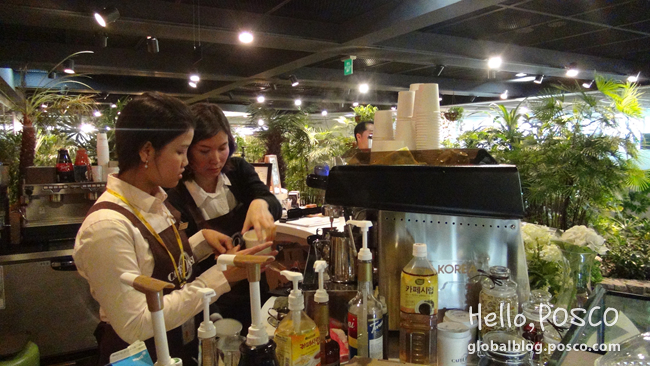 You can find amazing Café Oasia on the fourth floor of the POSCO Center, Seoul. Since last month Café Oasia went through a month long test operating where an average of 300 customers visited. The Customer satisfaction levels are very high, because they only serve the best quality coffee beans, ingredients as well as equipment of the best products provided from each social corporations. The prospect is to follow the idea of “franchise”, to continuing group purchase. marketing, management support, and consulting for newly establishing cafes. the agenda is also expanding upon union members for more branches.

Let’s hear from the two ladies who’ve been together since the establishment and during the entire test-operation at Café Oasia, Van Maly from Cambodia and Nam Antikar from Thailand, who also happen to have deep ties to POSCO. “Deep ties” meaning, both women have actually had their beautiful weddings on the same day, at the same spot due to the joint-wedding project sponsored by POSCO. Evident from both, POSCO is putting great endeavors to better multi-cultural families’ life and stable integration into Korean society. Some of our other efforts include offering language programs, call centers and personal consultants and teachers. POSCO hopes that families from different cultural backgrounds can live in harmony with Koreans as recognized members of Korean society. 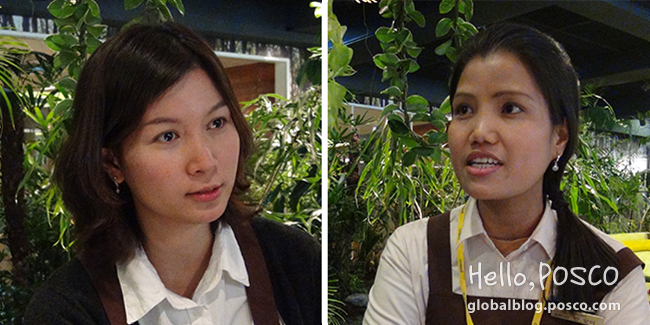 The idea is yet difficult to grasp with such brief introductions of our aims and achievements. So we’ve prepared an interview with Nam Antikar, our almost a pro-like barista, serving delicious cup of coffees, and Van Maly, who’s welcoming all customers with her bright smile and awesome Korean skills.

Van Maly is enjoying her new job in the café  Oasia and is eager to learn how to make her own lattes and caramel macchiatos. We asked Van Maly about her future goals and she said “I really want the barista-certificate, which I will most definitely achieve when I find the time to receive a professional education.” “With the certificate in my hands, I’d feel confident to work wherever I go in the future,” she added.

Van Maly’s barista co-worker Nam Antikar started working at Café Oasia for the social co-op via Government’s Multi-Cultural Family Support Center, where she also found out about joint-wedding sponsored by POSCO. Although her 37-month-old baby was too young to enjoy the perfect cup of coffee she brew, Nam Antikar said she would love to make a café latte for her husband.

She advised other foreign women immigrating to Korea by saying “Rather than starting work right away, I’d encourage them to learn Korean first.” Nam Antikar also pointed out that the women should smartly utilize many opportunities they are offered with, as she did.

Since 2010, POSCO has been sponsoring joint-wedding services to multi-cultural couples who weren’t able to have a proper wedding ceremony. We choose our participants from letters they send, invite their families abroad to Korea, provide a wedding, and present a family vacation trip. This isn’t just a mere wedding ceremony that we offer, but a memorable and most beautiful memory between a couple and their families. Most importantly POSCO gives continuous support and concern to these couples to stand independently. POSCO’s ‘Multi-Cultural Support Program’ participates are increasing day by day which leads to believe POSCO is indeed doing a good job

What is Social Co-Op Union?

Social Co-Op Union is a non-profit organization that provides employment opportunities and social services to socially vulnerable groups in the society. This type of corporate model has increasingly become popular throughout the world since it protects employees’ careers even during national bankruptcies and global depressions. As you may be familiar with, soccer team FC Barcelona, Sunkist Co. and AP Communications are all included in this social co-op union. In Italy, Social co-ops account for 60% of the total supply of the country’s social services. CGM Gruppo Cooperativo is one of the fine examples of the Italian social co-op movement. First established as a social enterprise in 1987, CGM engages with education, healthcare, environment and social entrepreneurship to pursue the common goal of building prosperity and development in the community. CMG supports other social co-ops to set up their own businesses and offers training for those who wish to work in co-op. They also monitor government social inclusion policies in order to boost employment of vulnerable members of society. 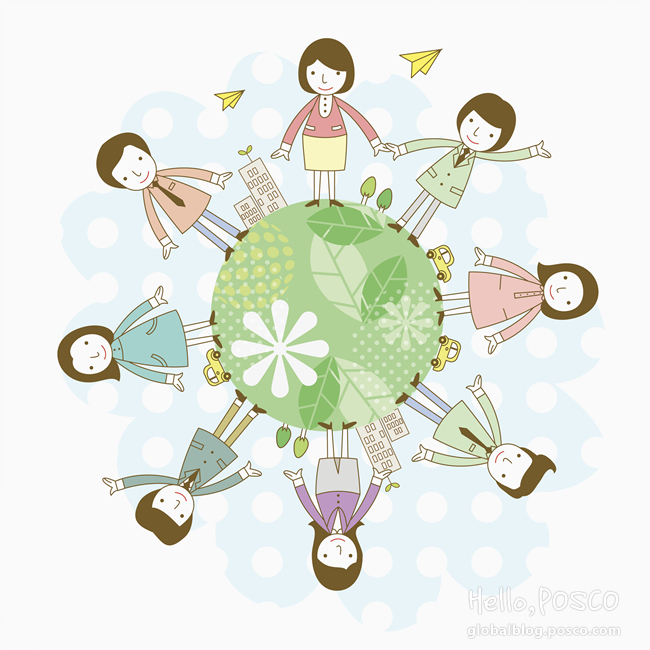