POSCO volunteered spreading eco-friendly silicate fertilizer at a farm in Gwangyang last year. Since POSCO is a steel maker, the connection with fertilizer might seem odd. However, steel and fertilizer are quite close — closer than we think. Let’s see how these two go together.

l What Is Silicate And What Is Slag?

When slag is first separated, it looks like hot molten lava. So to cool it down, high-pressure water is sprayed on it. After it cools down, the slag takes a sand-like form, and this is called ‘granulated slag.’ The granulated slag is then dehydrated and pulverized into pellet-like shapes about the size of 2 to 5mm. This slag is rich in silicic acid (SiO2), which is essential for rice farming, so it is made and utilized as a ‘silicate slag fertilizer.’ 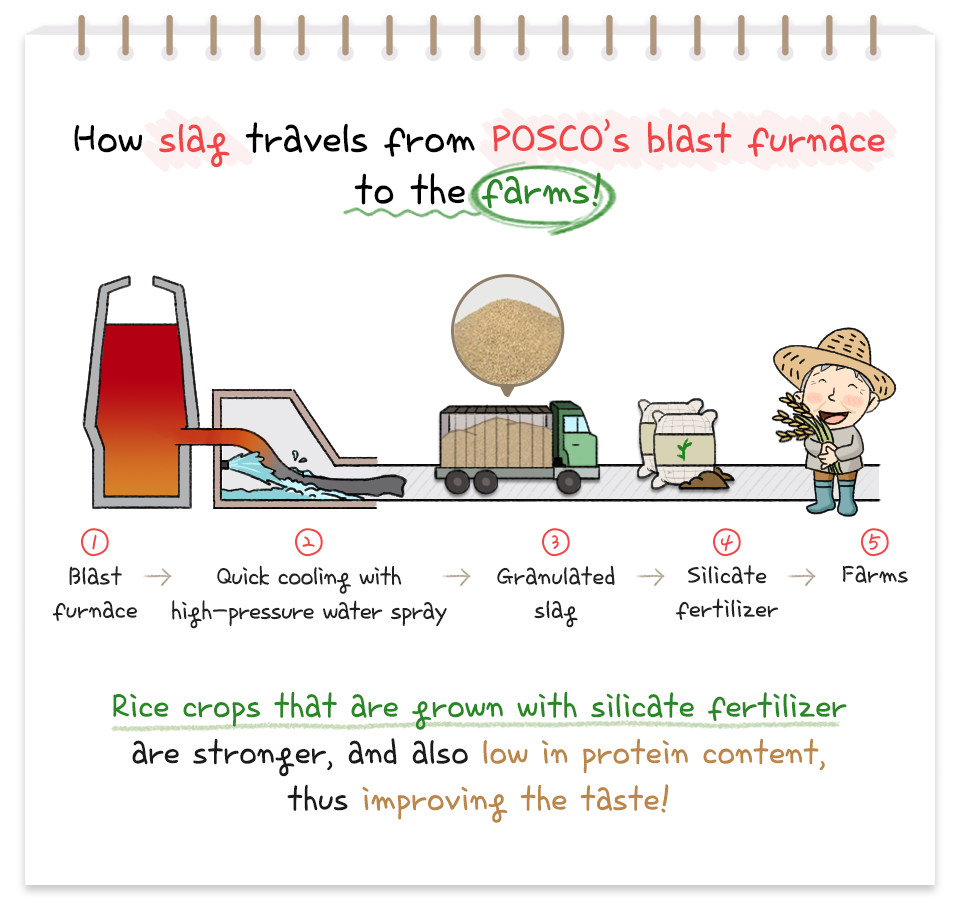 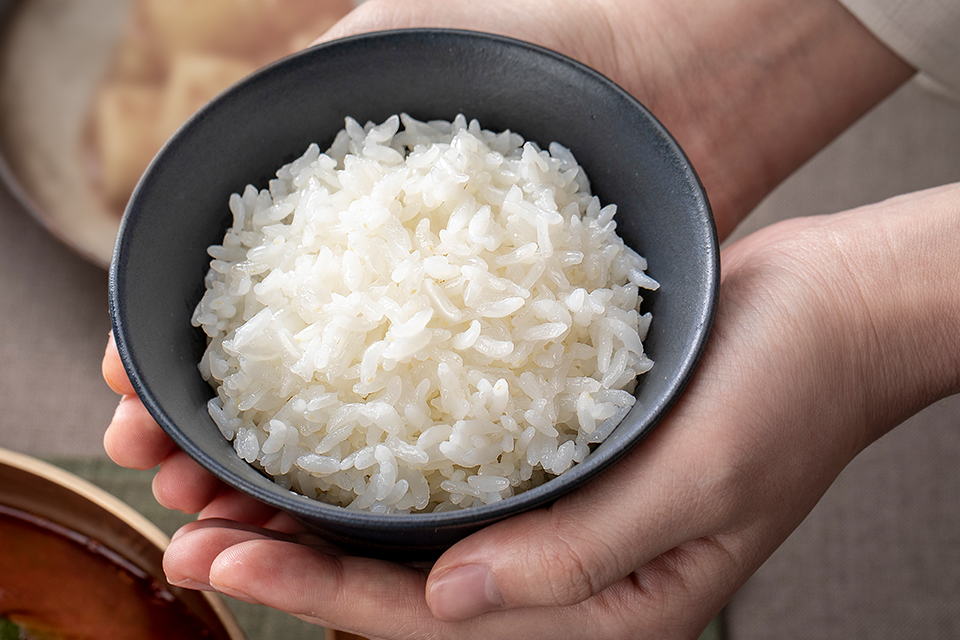 In Korea, rice that is sticky with a weak scent is generally considered ‘good’ rice. Silicate fertilizer lowers the protein content in the rice, improving the taste and enhancing the quality and standard of the rice.

Slag, which is a by-product of ironmaking at steelworks, contains 25-30% of soluble silicic acid. POSCO has contributed to increase farm income by continuously supplying slag to fertilizer companies since 1974, the year after the Pohang Works began operation. Did you know that all silicate fertilizer used in Korea is made from POSCO slag? In the past 45 years, a total of 13.76 million tons of silicate fertilizers have been supplied to domestic rice paddies.

It is a known fact that greenhouse gas causes global warming. In terms of carbon dioxide emissions from the agricultural and dairy industries in Korea, the numbers add up to 21 million tons per year — with 29% accounting from rice paddies. The use of silicate fertilizer is set to help reduce the amount of greenhouse gas emitted. 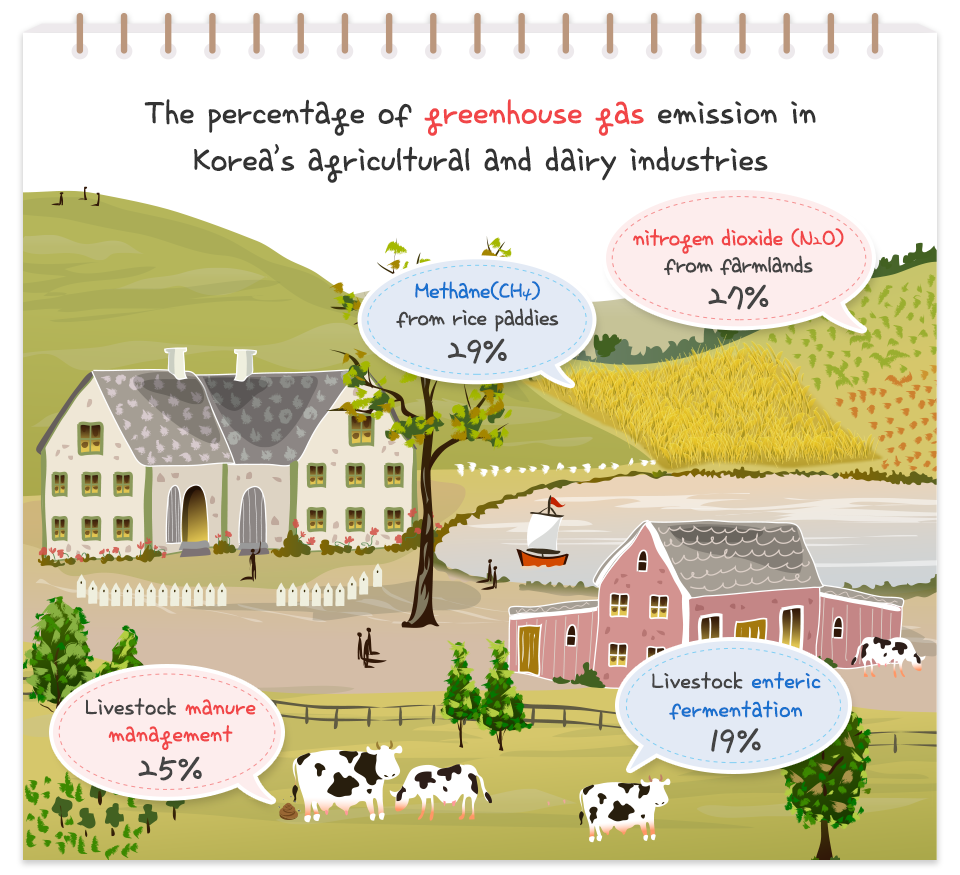 Since rice is grown with water-filled into the paddies, the organic matters in the paddy soil break down into methane (CH4). Research from agricultural experts states that the iron ions (Fe3 +) in the slag fertilizer reduce the methane concentration from the paddy fields by 15-20%. The fertilizer is also expected to contribute to the ultimate reduction in greenhouse gas emissions by 1.1 to 1.5 million tons per year in Korea!

Increasing the use of silicate slag fertilizer is helpful to all — farmers, fertilizer companies, and the whole environment. First of all, the fertilizer improves the soil quality, which in turn enhances rice quality and grades. This eventually leads to higher incomes for the farming communities. For the government, the use of fertilizer reduces methane gas from the paddies, decreasing the amount of overall greenhouse gas. Also, better rice taste boosts the consumption of rice, which increases the competitiveness of fertilizer companies. So silicate slag fertilizer is not only eco-friendly but also beneficial to the whole society.

POSCO plans to expand the demand for silicate slag fertilizer and develop overseas export markets so that the by-products are recycled well all around! (๑❛ᴗ❛๑)

[See more about the use of by-products here!] POSCO’s Eco Driver: Steel 2