[STEEL Talk] Was there really a missile made of steel in Joseon? ʕʘ̅͜ʘ̅̅ʔ

*Admiral Yi Sun-sin: A navy admiral who led the Joseon Dynasty navy and is still a beloved historical figure by Koreans.
*The Joseon Dynasty: A Korean dynastic kingdom that lasted from 1392 to 1897.

Several invaders of Joseon recorded that the Joseon navy fired arrows, which were as huge as girders. The girder mentioned here is the ‘missile’ of Joseon. Isn’t it amazing that there was a missile even back then? Let’s look into this missile in detail.

The missile of Joseon has the name, Dae-jangun-jeon. ‘Dae-jangun’ in Korean means, ‘the Great Admiral’, and ‘jeon’ means, ‘arrow’, so its name alone shows how frightful this weapon was to the enemy. Admiral Yi Sun-sin — commander of Joseon Navy — reported to the king that he had smashed boats with this weapon after winning the Battle of Dangpo (1592) — the Joseon navy had sunk 21 ships then. Dae-jangun-jeon was the largest and most powerful weapon in Joseon. 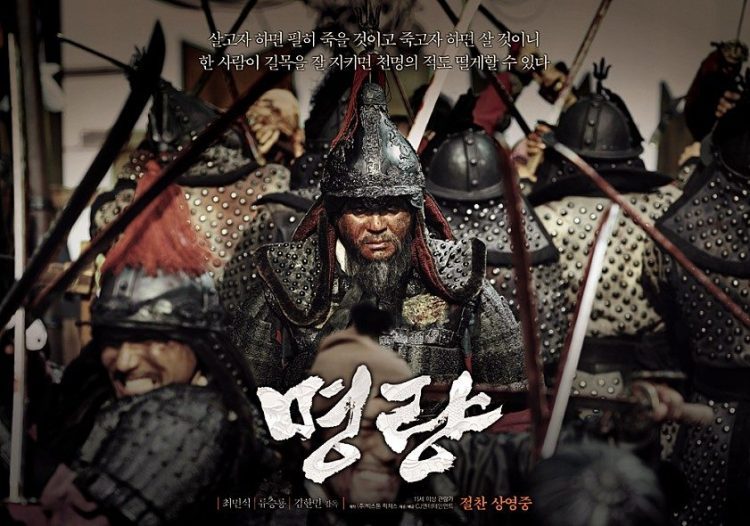 ▲ A scene from the film, depicting the Great Battle of Myeongnyang (Source: Naver Movie)

When we say cannonballs, we automatically think of round-shaped iron balls because of its name, but “Dae-jangun-jeon” is quite different. It isn’t round but instead stick-shaped, giving it the name — Joseon Dynasty’s missile. According to records of the time, the weight of one Dae-jangun-jeon was around 33.7kg, and its range was 1.14km. Then how could this heavy object fly a long-distance? 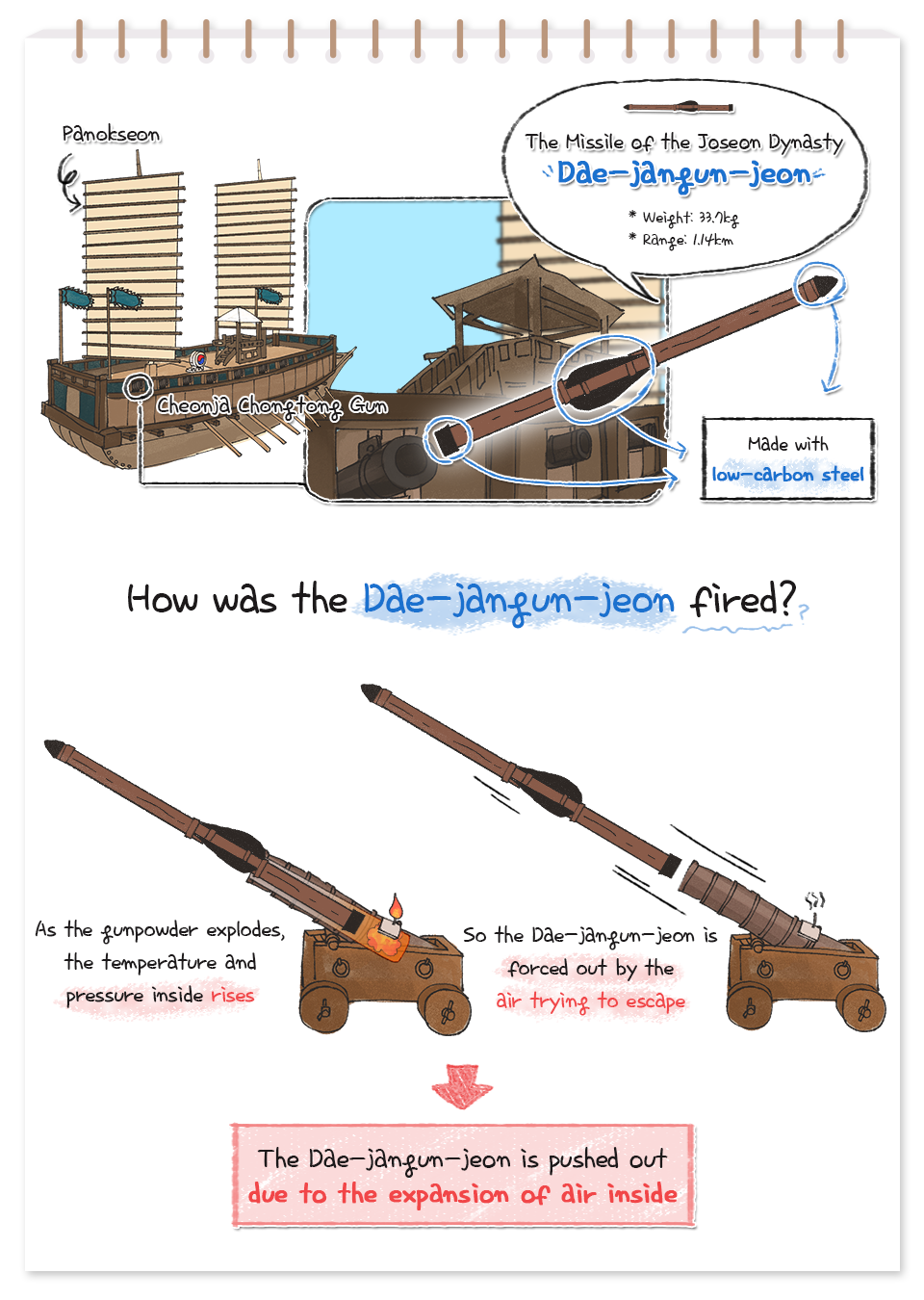 The ‘Cheonja Chongtong Gun’ was used to fire the Dae-jangun-jeon. And to get this huge missile to fly, iron was needed. One might think that huge amounts of gunpowder can make missile fly farther. However, gunpowder is just a trigger. Additionally, a missile made with just ‘strong’ iron would crack inside the cannon due to the explosive power of gunpowder. Let’s see the details in the image below. 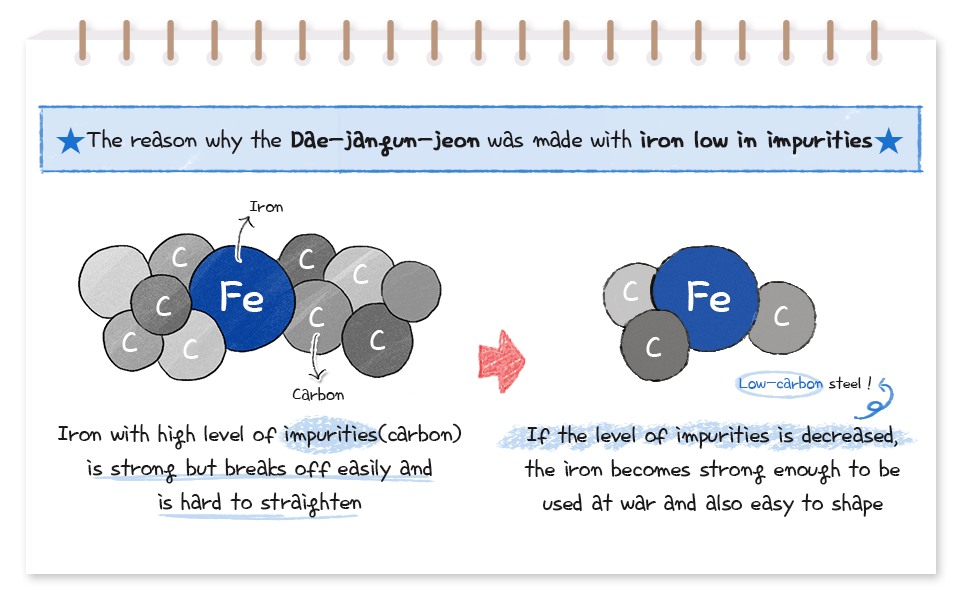 The main body of Dae-jangun-jeon is made of wood, but it has iron on the head to attack the enemy, on the tail to withstand gunpowder, and also iron wings so that it can fly farther. So for the Dae-jangun-jeon to be strong enough to defeat the enemy and withstand the explosive power in the cannon, it needed iron. According to the records, the iron used to make weapons in the Joseon Dynasty was iron that contained fewer impurities (low-carbon steel).

Just as coke is put into the furnace to melt iron ore at the steel mill these days, iron was made with charcoal during the Joseon Dynasty too. There is a lot of carbon in charcoal, resulting in massive amounts of carbon — impurities — in the molten iron as well. Iron, which contains many impurities, is strong but quite fragile, so it is not suitable for cannonballs. It is also difficult to change its shape into the desired missile shape. By reducing the impurities in the molten iron, iron can be easily straightened and stretched than before.

The secret behind the Dae-jangun-jeon was iron that is hard and strong, yet easily shapable!

Thanks to an interesting question today, we could learn about both history and steel. Don’t forget that Admiral Yi Sun-sin was able to save the country thanks to “iron” and the skills of ancestors to create “iron”!

* This article was written with help from researcher Seung-Hyeon Jo of POSCO Technical Research Laboratories, and curator Kyung-Ju Chae of the POSCO museum.