Formed in 1967, (then the International Iron and Steel Institute), the non-profit organization promotes steel to the industry, customers, media and the general public. Benefits of being a member of worldsteel include access to the latest technical and economic data, industry trends and performance impacting the steel industry. Members cooperate in developing programs and initiatives to drive the global common marketplace. Networking and access to events and conferences are also enjoyed by members. Worldsteel is not involved in competition of the steel industry, but rather unifying the industry on a global scale.

Steel Production by the Numbers

Worldsteel’s Steel Statistical Yearbook findings for 2015 show that Asia produces over 68 percent of the entire world’s crude steel. According to the Steel Statistical Yearbook, the four countries that produce the most crude steel are China, Japan, India and South Korea. Russia rounds out the top five. While many countries like the U.S. have decreased its crude steel production, South Korea has increased almost every year (the most recent yearbook shows data since 2005). Asia produces over 1 million tons of crude steel, and the second largest steel producing region is Europe, which produces just under 300 tons. 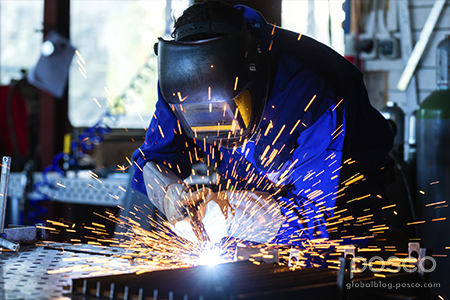 When iron is smelted from ore, it contains more carbon than desired. To form steel, the carbon must be reduced to the proper amount, at which point other elements can be added to reinforce it. In the past, steel was cast into ingots which would be stored until use in further refinement processes that resulted in the finished product. In modern processes of production, the initial product is closer to the final product through continuously cast it into long slabs, then cut and shaped to produce the final product. Continuous casting is more cost-efficient and is used in mass production and increasing the standard of quality. 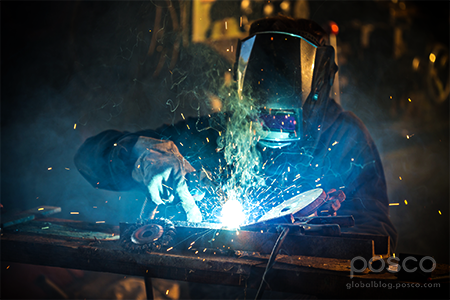 One of five major steel companies located in Korea, POSCO is recognized as one of the world’s largest corporations by Fortune Global 500. On September 21, 2015 POSCO celebrated cumulative sales of 800 million tons since the opening of Pohang Plate Mill in 1972. Ninety-eight percent of the crude steel produced by POSCO is made through continuous casting, which replaced the process of using ingots.