Steel: The Material of Choice in a Sustainable World

All steel enthusiasts around the world might have been sitting in front of their laptops on January 27th. Because it was the official day of worldsteel’s Twitter debate, discussing the future of the steel industry and its contribution to the green economy. This interesting online event was attended by numerous industry professionals by simply tagging #steeltalks to join the conversation. With total 748 #steeltalks tag made, plenty of notable information – which you might be dying to know right now – was shared in the discussion. Take a quick look at what the industry guru had to say about steel and a sustainable world at the #steeltalks. 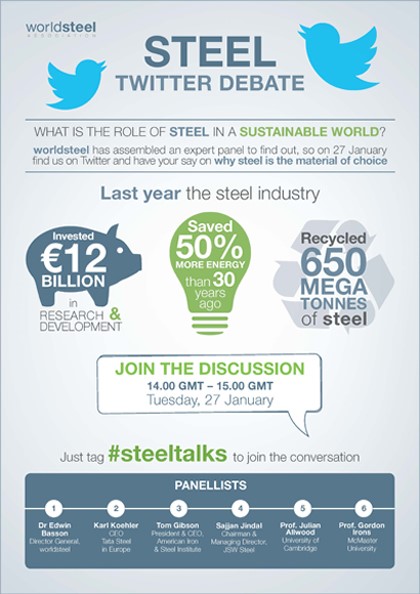 The Expert Panelists
One of the best features about the debate was the members of the panelists. The moderator of the event was Edwin Basson, Director General of worldsteel. Other inspiring panelists included Gordon Irons, Emeritus Professor of Materials Science and Engineering of McMaster University, Sajjan Jindal, Chairman and Managing Director of JSW Steel, Karl Koehler, CEO of Tata steel in Europe, Tom Gibson, President and CEO, American Iron and Steel Institute (AISI), and Julian Allwood, Professor of Engineering and the Environment of University of Cambridge. It was definitely the ultimate members to guide and spark the conversation, right? Let’s find out which topics were covered during the Steel Twitter Debate along with the exclusive panelists!

Is Steel the Competitive Material Choice in a Sustainable World?
As shown in the tweets below, this year’s main topic, brought by Edwin Basson, Director of worldsteel, was centered on sustainability of steel. To each panelist, Edwin Basson asked for more specific insights on steel as a green option to our generation. 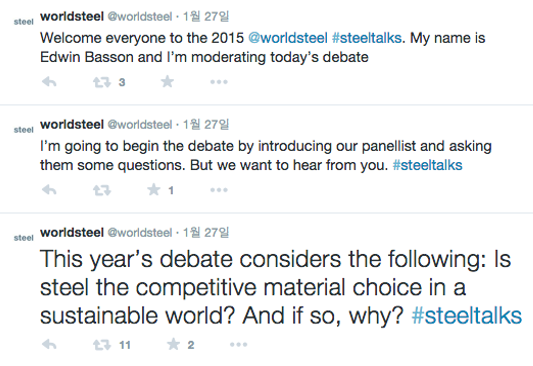 What Experts Think of Steel’s Environmental Benefits
Following the given question, the panelists and about 250 professionals engaged in and shared information in this hour-long debate. On behalf of AISI, Tom Gibson informed us that steel has much less Carbon Dioxide emission compared to aluminum, supporting the environmental friendly aspect of steel. Representing JSW Steel, Sajjan Jindal (labeled as WillOfSteel) added “efficient logistics and greater safety” to the idea that steel is sustainable and critical for infrastructure. Also, Professor Gordon Irons expanded the conversation by mentioning the link between energy use and emissions. He stated, “The steel industry has reduced energy intensity and has research for more reduction”. Lastly, Karl Koehler from Tata Steel offered a suggestion that “legislators should adopt whole Life Cycle Assessments”, mentioning the outstanding performance of steel through recycling. 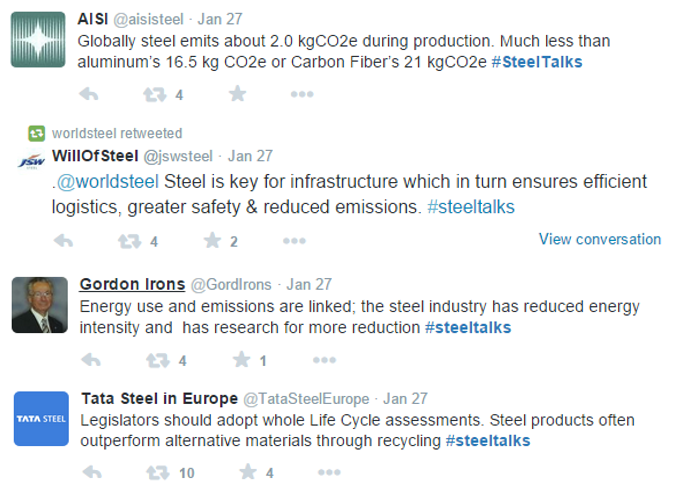 More about Steel’s ‘Green’ Features
So far, POSCO’s globalblog have been frequently discussing about eco-friendly features of steel in various aspects. For instance, we have introduced iron’s irreplaceability, POSCO Green Building, steel technology of the future and more.

At the end of the Twitter debate, worldsteel also shared further insights and facts by stating that the largest steel use happens in the construction sector which is about 51% of the entire use. Also, worldsteel stressed that steel is especially ‘green’ for the construction industry because “unlike wood & plastic, steel does not wear out after 40 years of use”. In fact, worldsteel has recently published a new technical report on energy use in the steel industry. For more details on the report, visit the worldsteel’s media center.

Since this post is only a summary of the debate, search for #steeltalks to view more comments posted at the event. If you have missed this year’s debate, join next year’s worldsteel Twitter debate to share your inspiring ideas for another important vision of the steel industry.