Technology for the commercialization of nano generators using frictional electricity, created by Professor Kim Dong-sung and his team at POSTECH, has been recognized by internationally renowned materials science journal, Advanced Materials. Professor Kim Dong-sung and his team developed a processing technology which enables low-cost, high-efficiency, high-speed manufacturing of nano generators by simplifying the manufacturing process for mass production, which collects wasted frictional electricity and converts it to electricity. 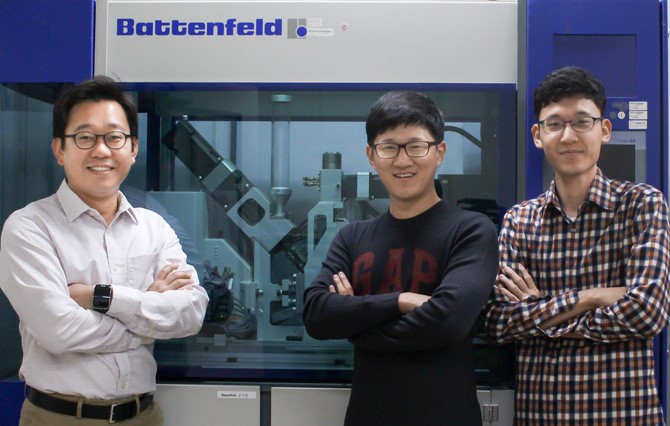 Professor Kim and his team conducted the research on the mass production and commercialization of transparent and flexible nano generators through the Mid-Career Researcher Project and Advanced Research Center Program supported by the Ministry of Science, ICT and Future Planning and National Research Foundation of Korea. The research results were posted on October 15 in the online issue of Advanced Materials, a renowned scientific journal covering materials science. It will also be published in the print journal December 2.

Active research into energy harvesting technology that can constantly supply electricity to small mobile electronic devices, such as smartphones and tablets, is currently being conducted. Energy harvesting is the process of capturing and storing wasted energy from external sources such as shock, kinetic energy, lights, heat and electromagnetic waves, then converting it to usable electric power to be stored for later use.

Jeobchok daejeon (접촉대전) nano generating technology induces an electrical charge, which is generated by friction when two different materials are brought into contact and then separated. This technology has high utility and efficiency compared to other energy-intensive technology, but it was difficult to mass produce for commercialization due to high-cost and multiple processes, such as using a semiconductor vacuum.

Professor Kim and his team discovered that, by applying a nano imprinting process to the Jeobchok daejeon nano generator production, the nano surface production and conducting layer attachment process can be done simultaneously. This is contrary to the previous production process, which was composed of multiple stages. With this process, they could successfully produce Jeobchok daejeon nano generators which are thin, transparent, flexible and has a fine structure of 1/10 mm on the surface, and has high energy generation efficiency up to ten times greater than that of a plate structure without the nano structure.

The research of Professor Kim’s team introduced the possibility of commercialization of Jeobchok daejeon nano generators by producing 1 cm2 Jeobchok daejeon nano generators within a few minutes, at the cost of only about USD 1. It can also be used as an auxiliary power device when attached to the surface of wearable power supply devices or ‘flexible displays. It can also be utilized for multi-source energy harvesting, which converts sunlight and rain into electrical energy. Professor Kim said, “By developing the technology for the commercialization of Jeobchok daejeon nano generators, which is thin, transparent and flexible, at a low cost and high speed for the first time in the world, we expect it will create ripple effects through industries. It can be broadly applied to new industries through the convergence of wearable electronics.”