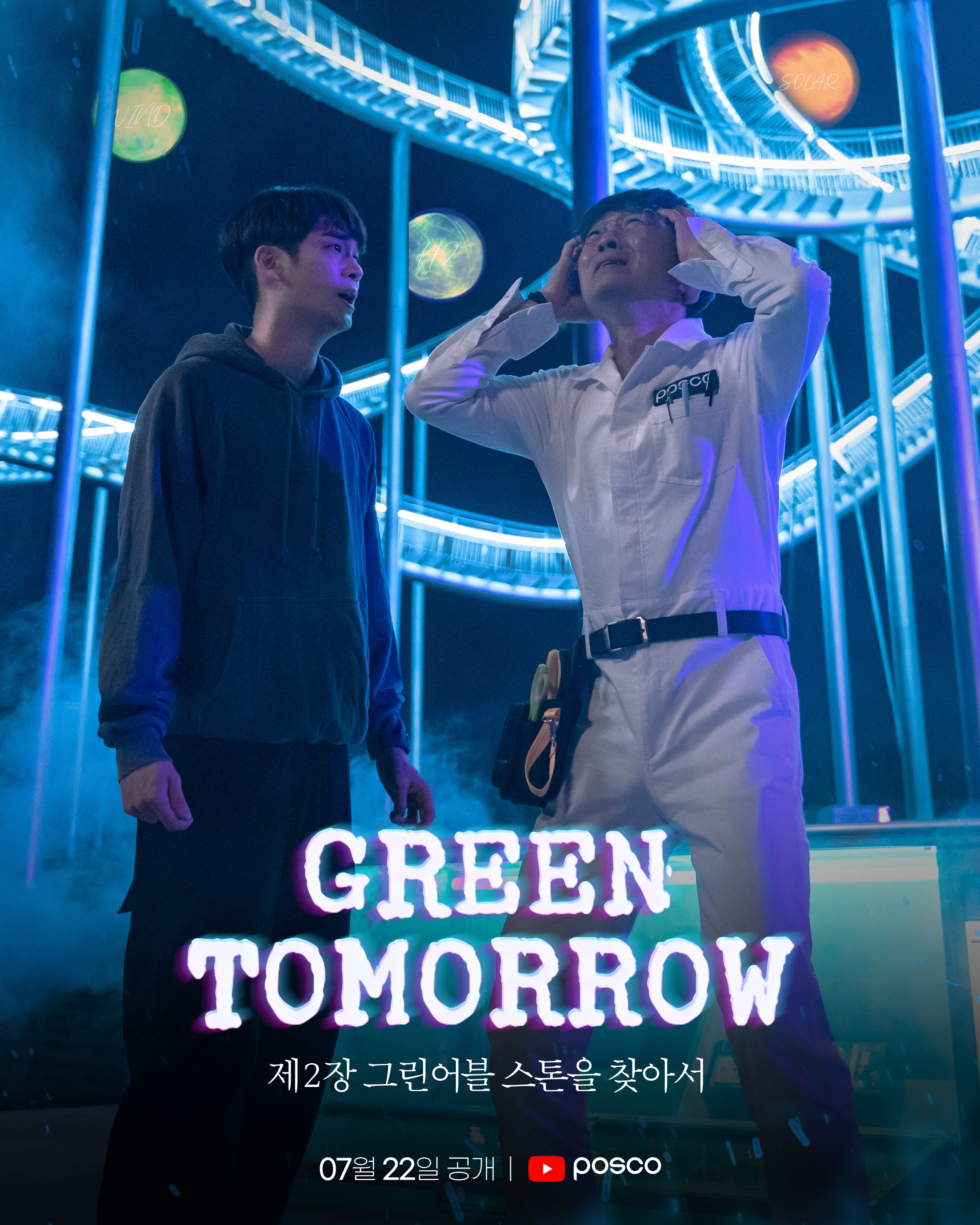 In the previous episode, Po Seok-ho (in the present, played by Yoon-woo Jo) finds a clue in the hydrogen reduction iron and steel making formula (Fe2O3 +3H2=2Fe+3H2O), and in this episode, he overcomes the crisis with “Greenable” stone, steel for eco-friendly energy. Let’s learn about the exciting behind-the-scenes story to see if it can overcome the popular belief in the film industry that ” no sequel is better than the first.”

Curious about the story of the first episode? Watch “A man from the future.”

Korea’s largest sculpture, Space Walk, was where the protagonists were forced to make an emergency landing due to the Carbon Villain’s hack. The 333-meter-long steel structure track was given the name because it gives the sensation of taking a walk in space. It also has the nickname Cloud, because it reminds people of the appearance of gently falling clouds.

It is not an exaggeration to say that Space Walk is a work in which POSCO’s technical prowess, which puts “safety” at the core of its design, is shown. Since it is a structure located high in the sky, it was designed to withstand a wind speed of 67 m/s and is durable enough to resist a maximum instantaneous wind speed of 80 m/s. Also, it has a seismic class 1 design to withstand strong earthquakes of 6.5on the Richter scale. How about visiting here, where the breathtaking chase of Carbon Villain and Seok-ho was filmed and experience the softness and magnificence of the ever-changing curves?

The main conference room of Jeongdogwan, an annex, was swiftly transformed into the base of the Carbon Villains, covered in thick smoke. Their boss tries to hack while watching the teleport on a large monitor in front, and with grotesque BGM and sound effects, the Carbon Villans’ hideout becomes fear itself. At this time, an unexpected (?) scene stealer appears. Don’t miss the fun of looking for a cat that appears briefly next to the boss, who cries his eyes out, missing Po Seok-ho (present)!

After receiving the “Find Greenable” order, Dr. Po Seok-Ho (in the future, played by Hang-joon Jang), overcomes the Carbon Villains’ sabotage and succeeds in collecting the three stones “Wind, Solar, and H2.” The identity of this item is revealed in the lines of POSCO’s mascot, “POSEOKHO.”

Greenable, the key theme of this episode, is one of three major strategic eco-friendly brands,* and provides professional products and solutions that are applied to producing, transporting, and storing future eco-friendly energy such as wind, solar, and hydrogen. 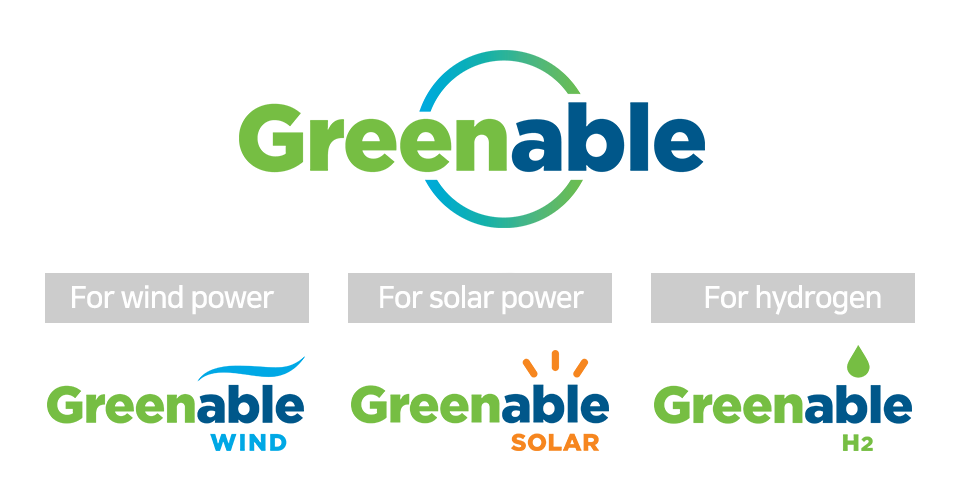 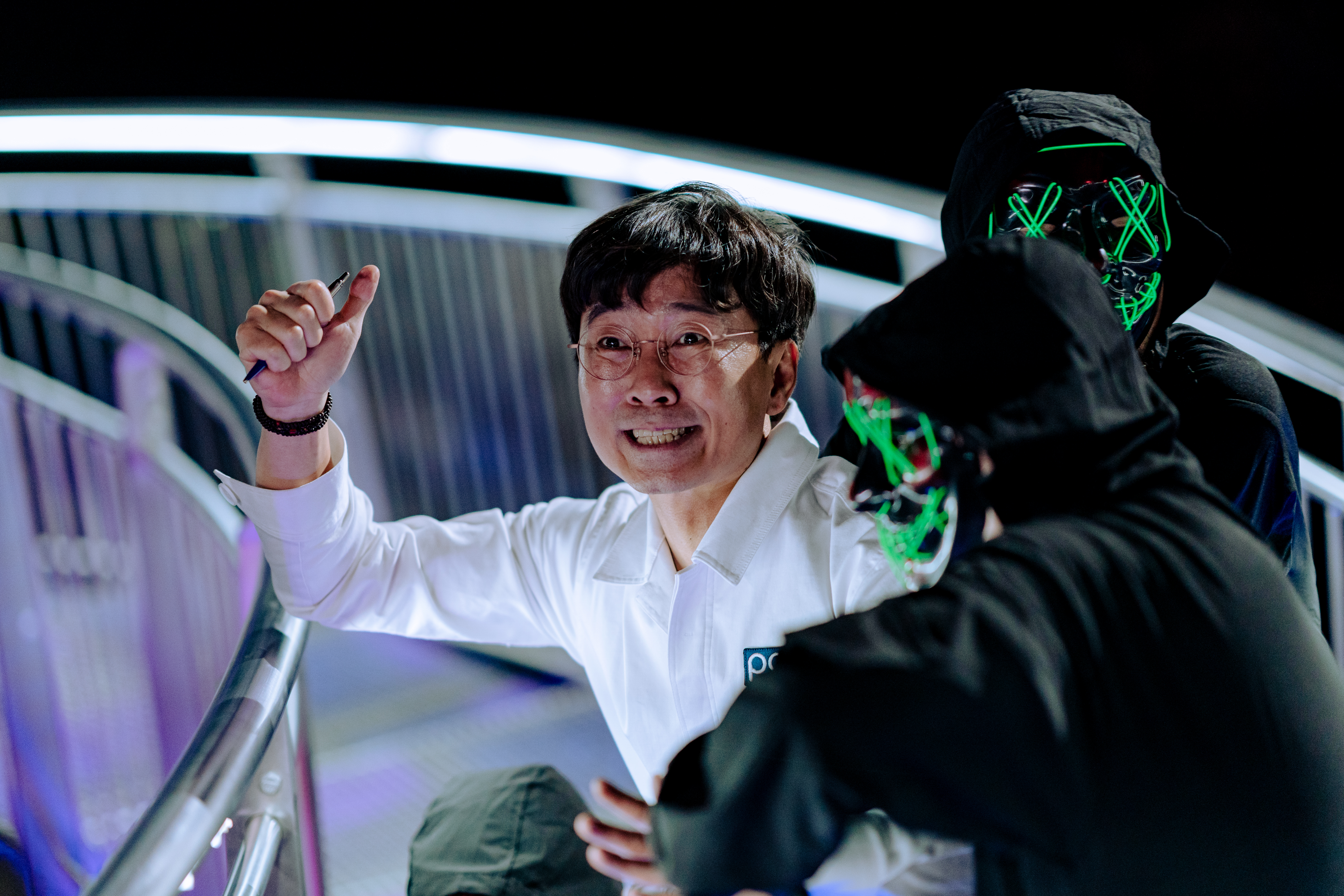 When it comes down to props, what can’t be left out of the <007> series is 007’s attaché case.
It is a case with all kinds of cutting-edge tools that reverse the crisis. Everyone imagined that they could become 007 if they had it. Movies use gimmicks like this to create a twist or add fun, and in this web drama, a ballpoint pen was used.

The web drama was created so that you can feel dramatic catharsis when the dirty ballpoint pen activates the time-slip function. Who knows if it may play a bigger role as an unexpected multi-pen in the next episode?

In the last scene, the teleport, in the form of a box in the air, is hit by a green energy beam that transforms it into a more sophisticated state-of-the-art teleport. With this, the concept of an eco-friendly infinite loop in which clean energy (wind, sun, and hydrogen energy) is created from POSCO’s “Greenable” new renewable energy steel and carbon-free iron is made with these types of energy is naturally included in the story. The teleport is a link that connects the first episode and this one, and is an important object to achieve the goal of saving the future. But there is one question. Where did the driving force for the teleport that crosses time and space come from? Although it is light in appearance, maybe the teleport was made of hard giga advanced high strength steel and the drive motor was made of non-oriented electrical steel plate made by POSCO.

What will happen to Seok-ho’s fate on the journey to Park1538? Can the Carbon Villain, who could not contain his anger, stop Seok-ho? Many questions are answered in the last episode scheduled to be released in September, so goodbye for a moment, even if you’re getting dizzy.