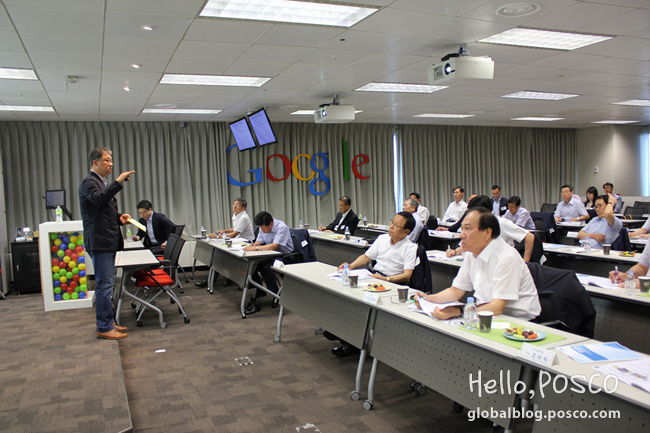 On August 2, POSCO Family companies’ executives gave a visit to Google Korea to experience the working culture of Google and its advanced working environment. The event was held to build mutual understanding and consensus on smart workplace, prior to the launch of POSCO’s ‘POSPIA 3.0: Smart Workplace,’ which is scheduled to operate from the end of this year until February 2014.

During the presentation, POSCO Family companies’ executives showed a big interests on Google’s “20% System,” which promotes its employees’ creativity by allowing them to spend 20% of their working hours to engage into the areas of their own interests. Google’s evaluation management, recruitment and education program also caught the executives’ attention.

A tour around Google Korea’s office was followed and POSCO Family’s executives were able to closely witness Google’s working culture with casual clothing, differentiated environments depending on tasks’ characteristics and sleek interiors reflecting the free spirit of Google’s employees.

Starting from 2011, POSCO has been working on “POSPIA 3.0: Smart Workplace,” which is an enterprise-wide integrated system in partnership with Google, to manage POSCO’s finance, purchase, marketing, operation-managing process and global information sharing system.