l On October 14, POSCO signs business agreement to share POSCO technology with the Ministry of Trade, Industry and Energy (MOTIE), Korea Institute for Advancement of Technology (KIAT), and SMEs
l POSCO reveals 1,350 patents in green, digital, and localization technology and offers 200 cases to 88 companies
l POSCO expands areas of shared technology to include those other than steelmaking, such as IT, environment, etc.

POSCO (CEO Jeong-Woo Choi) decided to provide 200 patent technologies free of charge as a measure to expand the base of the green and digital markets and to enhance the competitiveness of SMEs.

Especially this year, POSCO expanded the scope of support to the group level, including POSCO E&C, POSCO Chemical, POSCO Energy, POSCO ICT, and Research Institute of Industrial Science & Technology (RIST), to actively aid SMEs that are suffering from the COVID-19 issue.

Attendants at the signing ceremony of the agreement held on October 14 included Young-Jin Jang, Director General for Industrial Technology Convergence Policy; Yeong-Cheol Seok, President of KIAT; Si-Youl Choun of POSCO; and representatives of beneficiary SMEs. As a measure to prevent the spread of COVID-19, the event had a limited number of participants and was broadcast live online.

Young-Jin Jang, Director General for Industrial Technology Convergence Policy, said, “Today’s event demonstrates the spirit of cooperation in our industry. We were also able to grasp the potential of innovation, especially in terms of the quantity and quality of the shared technologies.” POSCO’s Si-Youl Choun remarked, “The efforts that large corporations share with SMEs are in line with POSCO’s philosophy Corporate Citizenship. I hope that this technology sharing will lead to the development of the green and digital markets and localization technologies hence triggering the birth of new giant SMEs.”

POSCO has been participating in the technology-sharing program, which is organized by the MOTIE, since 2017, and continues to realize its management philosophy Corporate Citizenship and strives to create shared values with SMEs. 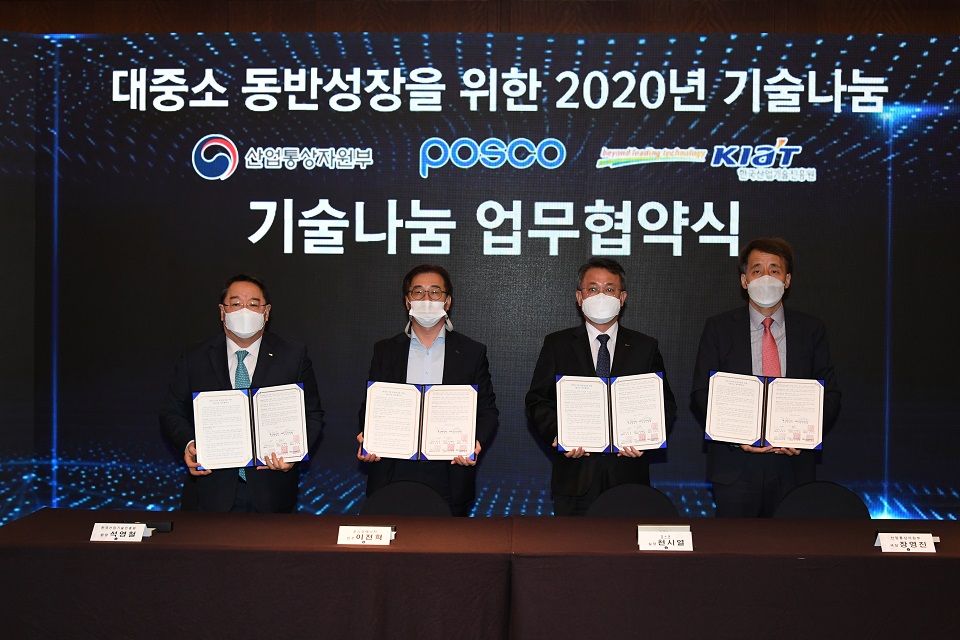