POSCO “STEP”s Up Its Game for Shipbuilding

On September 14, POSCO and Hyundai Samho Heavy Industries held a ceremony in Mokpo to celebrate the initial application of POSCO’s STEP (Steel Tapered Enhanced Plate) for ships. Officials from the two companies, including Vice President Sang-gyun Lee, head of the Production Division at Hyundai Samho Heavy Industries, and Se-don Joo, head of the Energy Shipbuilding Market Department at POSCO, attended the ceremony in celebration of the successful application of STEP, and discussed plans to further expand mutual cooperation.

POSCO recently completed STEP development, and applied it to the hull of Hyundai Samho Heavy Industries’ ships. STEP is a thick plate product with varying thicknesses that form a gentle slope on a single steel plate. Applying STEP will enable shipbuilders to skip the welding process, reducing labor costs and delivery time. POSCO is the only domestic steel maker to have developed the technology on its own. 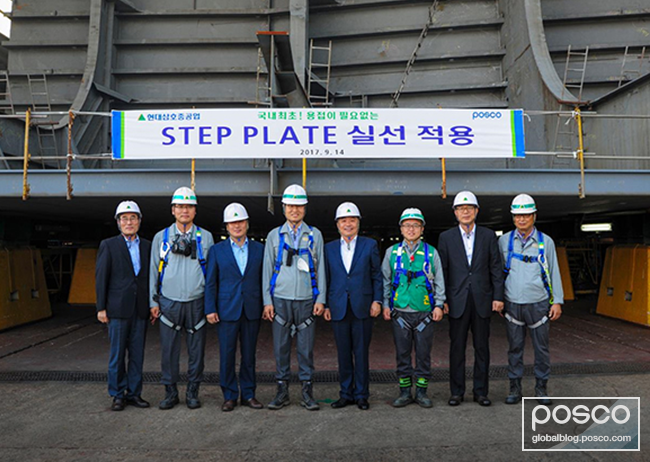 Employees of the two companies are standing in front of the hull that was assembled using STEP.

In shipbuilding yards, the thickness of thick plates varies depending on the amount of pressure applied during construction. As the welding of thick plates of different thicknesses involves excessive man-hours, back-end processing is occasionally delayed. In order to help its partner overcome such difficulties, POSCO began to develop the technology for STEP in 2015 in collaboration with Hyundai Samho Heavy Industries. They acquired a classification certification last March for the technology and successfully applied it to an actual shop after several field application tests.

STEP is also expected to benefit domestic shipbuilders currently suffering from the recent global recession of the shipbuilding industry, by helping them reduce costs and increase productivity. Shipowners will also benefit from the improved quality and shortened inspection time. 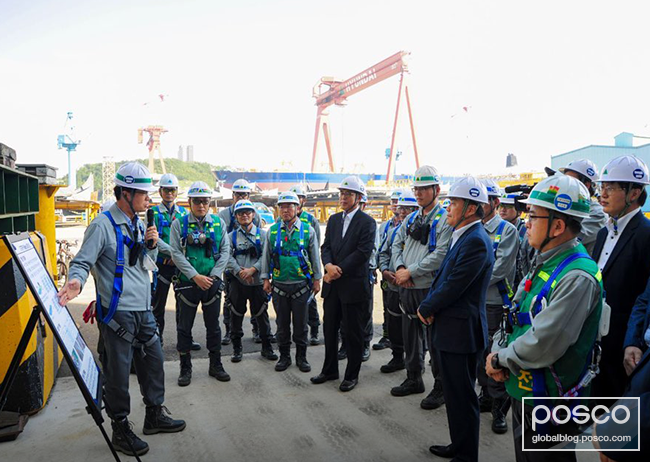 VP Sang-gyun Lee of Hyundai Samho Heavy Industries explains the development progress of the hull block at the ceremony held to celebrate the first application of STEP.

Officials from Hyundai Samho conveyed to POSCO the difficulties they had on the shop floor over the years before applying STEP, and said, “The use of STEP is expected to secure working space, reduce bottlenecks and welding man-hours, and thus save costs by more than KRW 60 million per ship.”

POSCO is planning to mass-produce STEP starting next year, and expand its application to other industries, such as bridges.