The REI Expo is one of the world’s largest new and renewable energy exhibitions. More than 725 companies from 40 countries participated in the Expo, along with approximately 50,000 visitors. The turnout was largely due to the Indian government’s infrastructure expansion and intensive investment plans for new and renewable energy.

POSCO India’s booth at the event showcased its solar PV structures made of PosMAC steel to major solar companies and structure manufacturers such as Adani, Nextracker, Arctech, Softbank, Purshotam, etc.

During the Expo, Memorandum of Understanding (MoU) agreements were signed with four companies. POSCO India’s Chief Managing Director Gee Woong Sung said, “By the end of this year, we will complete the Indian solution marketing system, which will supply not only steel but also solar PV structures. In 2018, we will further expand PosMAC sales in India.” 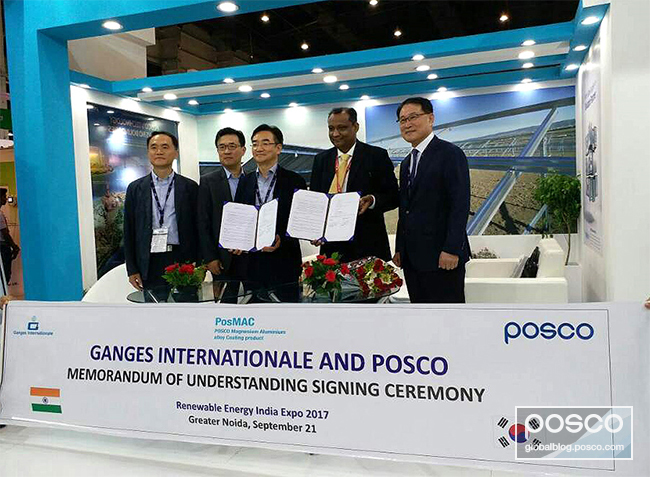 In addition to showcasing their premium product, POSCO has been working hard to meet customer demands in all areas. In order to meet short delivery times and structural supplies required by various PV projects in all parts of India, POSCO India has decided to establish a PosMAC structure supply chain system through strategic cooperation with local construction companies.

In the first stage of development, the free space at POSCO-IAPC located in Ahmedabad will be utilized via a long-term lease, and the manufacturing machinery is being installed with an operation target set for October. In the second stage, POSCO India has plans for additional installations in the Delhi and Pune regions.

POSCO India will strive to build a differentiated sales network with its solution marketing activities and secure a sustainable competitive advantage over other companies through its premium-quality products and advanced supply chain system.