POSCO opened a wire rod processing plant in the U.S., home to the largest wire rod market in the world, that will yield an annual production capacity of 25,000 tons.

Wire rods are steel products used to make bolts, nuts, bearings and long steel used in automobiles, electronics, industrial machines and construction. POSCO is planning to focus its production on high-end automotive parts and bearings that are not currently being produced by local steelmakers in the U.S.

The new wire rod processing center will bring raw materials from Korea, heat-treat them, remove impurities, process them into thin wire rods and customize the final product to the thickness and strength that customers want. Construction began in April 2016, and POSCO invested a total USD 20.9 million. It is POSCO’s second largest overseas wire rod processing center, next to its center in Mexico. 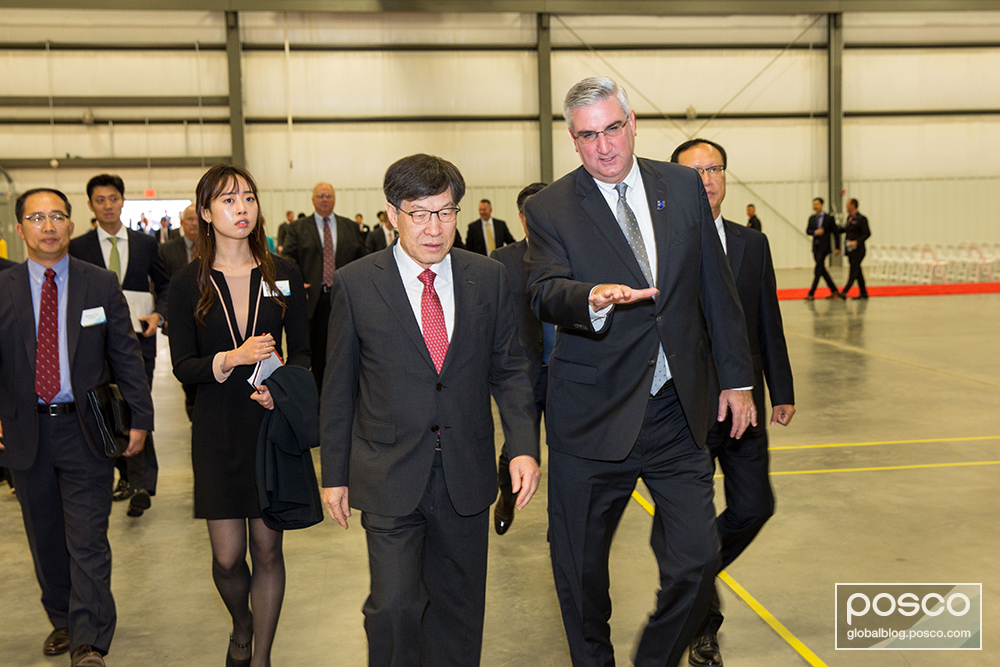 POSCO is planning to preempt the high-end wire rod market in the US by not merely selling products, but also providing local services such as quality support, development of new steel products and provision of utilization techniques. The products manufactured will be delivered to Semblex and Taeyang Metal Industrial, Korean companies in the U.S. and local automotive parts makers like Nissan and Fontana.

JP Steel Co., Ltd., which owns 2.2 percent of stakes in the new wire rod processing center, will directly oversee production. JP Steel possesses the technology used for processing POSCO’s wire rods into products that meet the thickness specifications of customers. One of POSCO’s strategies for ensuring the mutual prosperity of small, medium and large-sized companies is to enter a new overseas market together with small and medium-sized suppliers while protecting their technology and business areas.

Governor Eric Holcomb said, “I hope that POSCO’s wire rod processing center will help improve the industrial competitiveness of American automakers and parts makers, and invigorate the local economy. We will do everything we can to help the new plant become stabilized early.”

CEO Kwon stated, “POSCO is now able to sell our premium products to the United States, the world’s largest wire rod market, and American automakers and parts makers can use quality products to enhance their competitiveness. I hope that this will help domestic parts makers using wire rods make inroads into the US market.”