You probably have encountered one of the biggest news in Korea over the recent period; the country has inaugurated its first female president since the constitutional government was established back in 1948. It seems that so-called ‘Glass Ceiling’ is on its course to be shattered and POSCO is one of the leading corporates promoting the change once and for all. In line with the movement, POSCO has recently promoted three female employees into the boardrooms. They are Senior Vice President Eun-Joo Choi, Senior Vice President Sunhee Yoo, and Vice President Ho-Young Yang. 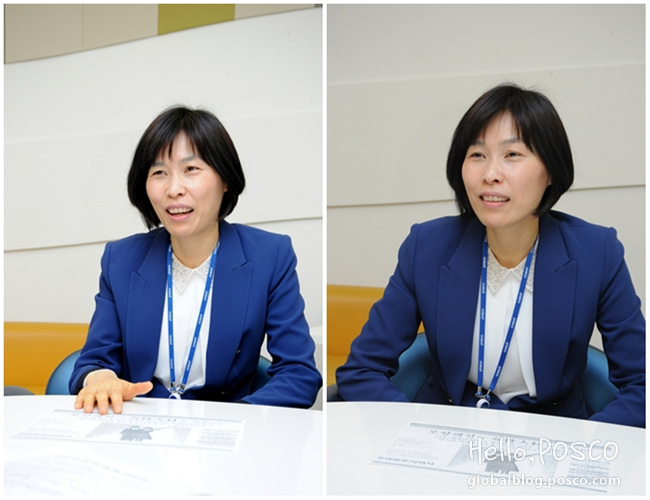 ‘Hello, POSCO’ decided to run a series of interviews with the triumphant female executives and this is our first edition with Senior Vice President Eun-Joo Choi, who became the first female executive after joining POSCO through its first open recruitment for new female employees in 1990. Let’s find out her warm heart and passionate initiatives in one of the world’s largest steelmakers.

It’s great to have an opportunity to interview you today. Can you tell us about how you initially joined POSCO?

It was a very rare occasion for the steel industry to hire female employees when I joined POSCO in 1990. In that year, POSCO advertised the firm’s first plan to recruit female talents with a catchphrase saying, “We open doors for planning, finance and marketing and every other department to women” for the front pages of every major general daily. It was quite an innovative move at that time.

As soon as I read the piece, it made my heart flutter. I think it was because of the implication that a steelmaking company is employing women workers. Actually, I’d been accepted by a bank and was on my way to a training facility when I saw the advert. I just turned around and walked straight to POSCO to apply for the job. When I was taking an entrance test for POSCO, I was even interviewed by the evening news as it was quite an unusual move by a steelmaker.

What was your first task at POSCO?

For the first 9 years, I managed production costs, financial analysis and business planning. After working in the finance department, I conducted an educational task for another year and half. Then, I was given a task to engage with planning and investments in relation with POSCO’s affiliates.

My first task was to deal with production costs mainly involved calculating digits and closing accounts. At the time, it was hard to give meanings to the tasks I was handling with. However, I later realized that it actually depended on ‘how’ we assign certain meanings towards the tasks we are engaged with. I see these newly incoming employees, who tend to refuse to be involved in doing hard works but only looking for doing something ‘cool.’ Regardless how hard and menial certain jobs seem to be, you can always be benefitted by the experiences from those kind of works to grow up in terms of your career. 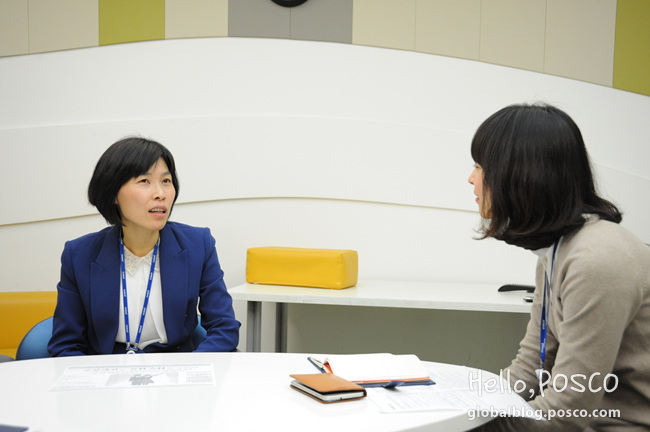 Have there been any thankful moments you want to share with us?

I’m always thankful for all of my colleagues and especially for my two children. It was extremely hard to hold down a job and raising children. Not being able to stay by their sides as a mother made me feel quite bitter. Whenever I heard they were ill, it broke my heart. However, once they were grown to be upper graders of elementary school, the kids told me they were proud of their mother. It really touched me when my children said they would behave well and study hard so I didn’t need to be stressed while working in the office. I am thankful for their understandings and also sorry for what they had to bear.

What is the merit of being a female talent?

I reckon women have better abilities to think in other people’s shoes as well as being good listeners. Such abilities allow women to lead smooth communication and often find appropriate answers quick through listening to other people’s voice.

I think we can generate a greater alternative answer by putting the strengths of men and women together. I also believe an organization with a better harmony between men and women would generate much bigger synergy.

Is there anything you want to advise, especially, to female employees?

The female newcomers have great talents. They have their own specialties and impressive qualifications. Having said that, the ones I consulted with tend to say that most of them are excessively focused on chasing a short-term target rather than having a wider scope.

Being in an organization is like running a marathon. You work there for 20 to 30 years, not for a couple of years, but the female talents are usually in a too much hurry. Male employees are normally familiar with slowing down processes and controlling phases of tasks given their longer experience of being in collective organizations. On the other hand, despite of their superior individual abilities, female employees sprint for the finish line to be recognized faster than others. This is why they often complain about not being appreciated enough after all the hard works.

I want them to look at the big picture and learn how to work with the male colleagues. Men are not your enemies to compete against but companions to cooperate with. It’s always a better option to solve problems with everyone involved. If a colleague is going through a difficult time, you need to think about how to help, not trying to beat him/her.

You now hold the title of becoming the first female executive who joined POSCO through an open recruitment. How do you feel?

At first, it was a big pressure for me. But I’m sure that it will be a brand new challenge. I am very excited as if I was a new recruit.

When I was leaving my previous office after the promotion, some of the junior members asked me to set a fine example for them to follow. Their words have made me to reflect myself and be determined to do my best. I wish this could serve as a momentum for the new challenge so I could show them how well I would be doing as their senior in the new position. 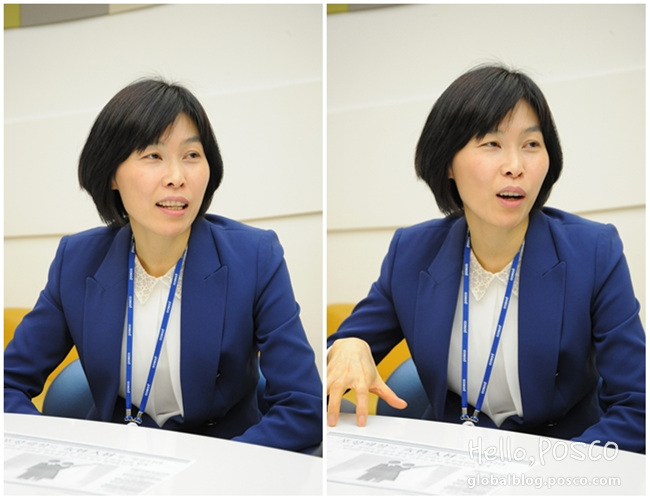 What is your proudest/fruitful moment as a member of POSCO?

When I was in charge of POSCO’s strategic planning, I was the first person to launch an operation to create synergies amongst POSCO affiliates. Previously, we used to set our primary target to optimize the operations for each corporation. Now, I was able to highlight the ways of leveraging optimization for all. Nowadays, if POSCO won a contract, the operation could be managed with POSCO Energy, Daewoo International or POSCO A&C. Broadening the spectrum of ideas for establishing the group’s symbiotic and constructive foundation is the most worthwhile work I have engaged with at POSCO.

We would like to ask you a final question. As a member of society, what are the essential attributes and attitudes?

I think we need to have a sense of consideration for others. To genuinely care for the people around us, we need to share what we have learned and consider one more time in their point of views. These virtues are highly vital in POSCO’s culture. An attitude of caring for others and giving back the solicitudes we have received is the most important quality we need.

‘Consideration’, ‘Communication’ and ‘Sharing’. These are the three virtues Senior Vice President Eun-Joo Choi emphasized in this interview. It was very worthwhile to share her thoughts and advices indeed. For the next time, ‘Hello, POSCO’ will interview Senior Vice President Sunhee Yoo, so don’t you miss it.