This year, POSCO and the company’s honorary chairman Taejoon Park were inducted into the Korean Business Hall of Fame in the enterprise and entrepreneur categories. Park was elected into the hall of fame in recognition of his entrepreneurship in the steelmaking industry, while POSCO was elected due to its contributions to the industrialization of Korea.

The recognition ceremony was hosted by the Korean Academic Society of Business Administration and Maeil Business News on October 18 at the Shilla Hotel in Seoul. It took place as a tribute to the distinguished services rendered by various enterprises and entrepreneurs that served as the driving force behind Korea, helping the country become one of the top 10 economic powers of the world.

In the enterprise category, the elected companies included: Samsung Electronics, CJ Cheil Jedang, Amore Pacific, SK Telecom, LG Chem, Hyundai Motor Company as well as POSCO. People who were inducted into the entrepreneur category included: Taejoon Park (the honorary chairman of POSCO), Inhoe Koo, Kunhee Lee, Byungchul Lee, Mongkoo Chung, Juyung Chung and Jonghyun Choi. Among the inductees, Taejoon Park is the only member who is not an enterprise owner-manager, making his achievement a unique and remarkable one.

At a time when POSCO lacked experience and technological means, Park, armed only with the conviction that “Steel is the rice of industry, and that we must make the country rich by making cheap quality steel,” erected the integrated steel mill at Yeongil bay of Pohang, which was a wasteland at the time. Living up to his motto of “I shall dedicate my short life to the eternal fatherland,” he transformed POSCO into a steel mill in 1992 that produced 21 million tons a year. Just 25 years later, he created a stable steel supply system.

Thanks to POSCO, steel-consuming industries such as the automobile, shipbuilding and construction industries, secured superior quality and cost competitiveness to become the leading enterprises of today. One story often told in Korea in industry circles involves the Chinese Community leader Deng Xiaoping. He visited the Nippon Steel Corporation in Japan in 1978 and asked the company’s chairman Yoshihiro Inayama to build a steel plant in China similar to POSCO’s. In response, the Nippon Steel chairman told Deng that “it won’t do you any good unless China has a manager as good as Taejoon Park to run it.”

This anecdote gives us an idea of Taejoon Park’s success story and his reputation as an indomitable driving force. Through his vision and dedication, the honorary chairman spearheaded POSCO’s transformation into the world’s most competitive steelmaker, and laid the foundation for Korea to become a powerhouse in the heavy and chemical industries. 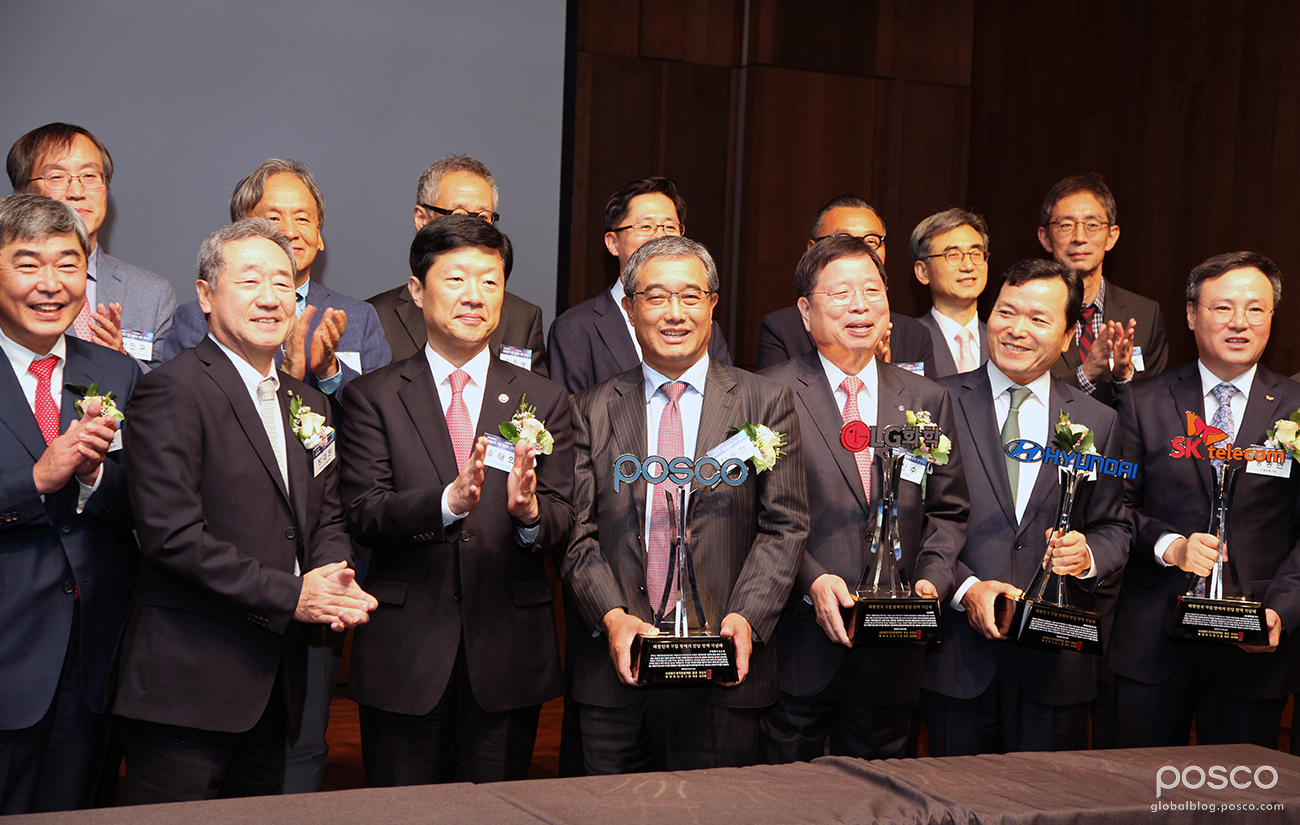 POSCO and its honorary chairman Taejoon Park were elected into the ‘Korean Business Hall of Fame in the entrepreneur and enterprise categories at a ceremony held on October18 at the Shilla Hotel in Seoul. From the left, Changjo You (chairman of the Korean Academic Society of Business Administration), Daehwan Jang (chairman of Maekyung Media Group), Taehee Woo (vice minister of Trade, Commerce & Energy) and Eunyeong Hwang (the CEO of POSCO) can be seen posing for a picture at the ceremony.

“It was the entrepreneurship and can-do spirit of the founders, including the honorary chairman Taejoon Park, that made POSCO the most competitive steelmaker in the world,” said Professor Jinbae Kim of Korea University, who presented POSCO at the ceremony that day. “I sincerely hope that POSCO employees will do their best to enable the company to maintain its status as the best steelmaker in the world by taking in this spirit of entrepreneurship and engraving it in their DNA.”