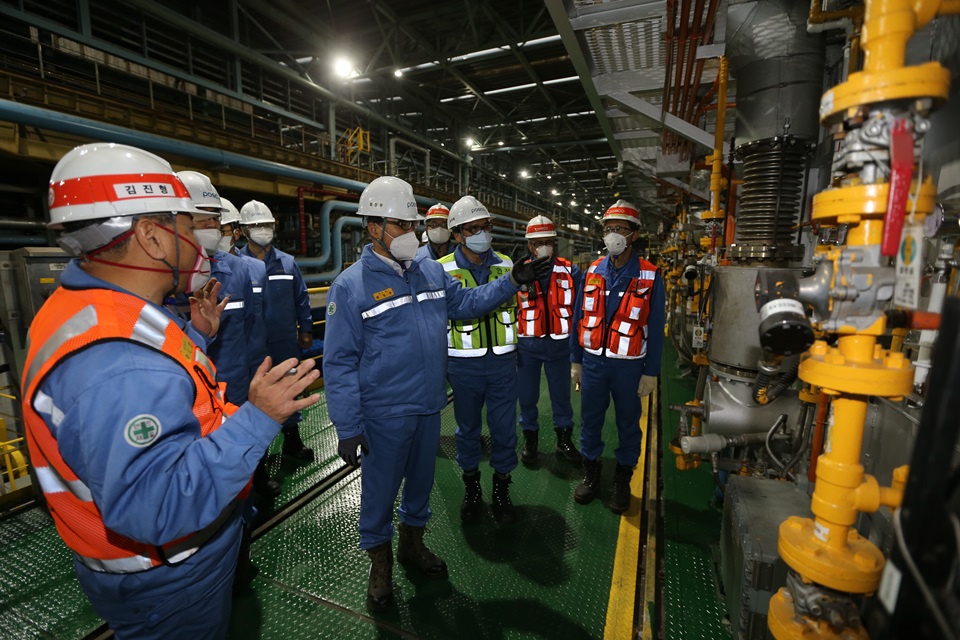 POSCO CEO Jeong-Woo Choi emphasized “safety” as of paramount importance at his first visits to the steelworks this year.

On arriving at Pohang Works, CEO Jeong-Woo Choi visited the offices of the POSCO Labor Union and the Labor-Management Council first to meet with the Union Chairman and other personnel. At the meeting, Choi stated that employees and management must work together to establish a safe and healthy workplace.

At the site, CEO Jeong-Woo Choi once more stressed that by setting safety of paramount importance, the workplace should be established as a place where employees are satisfied.

Through the New Year’s message, POSCO CEO Jeong-Woo Choi had pointed out safety as the most important value that POSCO employees should focus on this year. He had also said that old safety facilities and unsafe work environments should be actively discovered, improved immediately, and equipped with smart safety devices, with the belief that I will protect the safety of me and my colleagues.

Choi also urged employees to concentrate all their capabilities to secure an initiative for the hydrogen business, which is considered as POSCO’s new growth engine in the future.

On January 8, CEO Jeong-Woo Choi visited Gwangyang Works and met with the POSCO Labor Union’s Gwangyang Branch and the Labor-Management Council. He also inspected the automotive steel plant and the lithium production plant in turns.

At the meeting, CEO Choi stated that for the steel business, such as automotive steel, the gap in competitiveness with competitors must be widened. As for the secondary battery material business, the value chain, that stretches from raw materials, like lithium, to cathode and anode materials, must be strengthened so that POSCO can leap to the Top Tier globally.