The 6th “POSCO Beyond” with “Habitat for Humanity”, building houses with love in Delhi, India 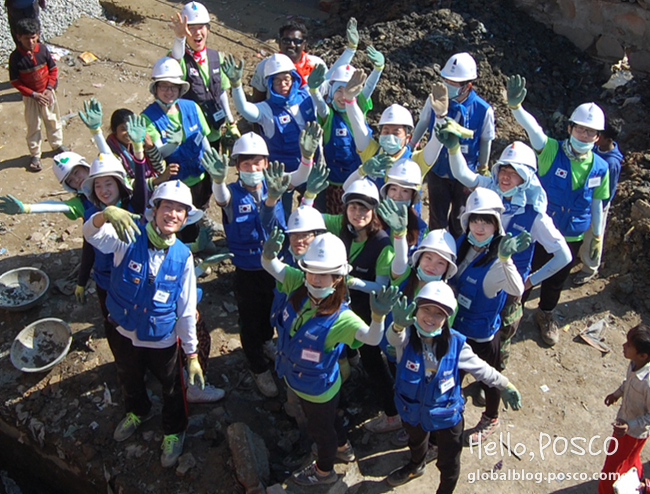 Since 2007, POSCO has been contributing to societies in need through various social activities through 100 selected university students. Every year, the “Beyond”, POSCO’s volunteer group of undergraduate students, is working diligently to provide warm and comfortable homes for the less fortunate across Thailand, Vietnam, Indonesia and other places.

Like any other hardworking year, the Beyonders went to a small town called ‘Bawana’, located in the northwest of India’s capital Delhi. From February 2nd, the Beyonders volunteered to build lovely houses for people living in the area. Let’s introduce you to their 12 days of not only giving, but also learning.

POSCO Beyond 2nd visit to Bawana 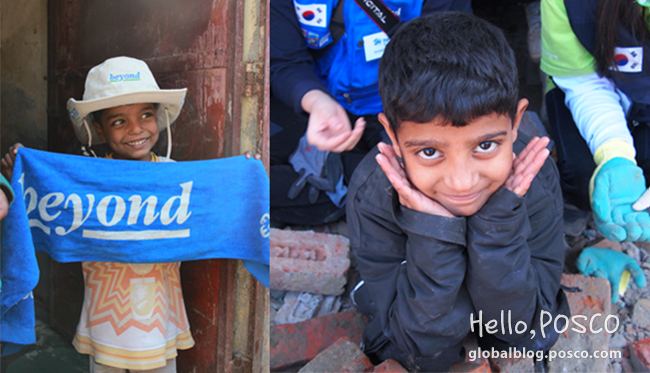 Bawana was the place where the 1st Beyonders visited to build their very first housing project in 2008. During their stay, around 100 university students worked hard to present 10 new homes for the Bawana people. For this year, 110 students from 52 universities gathered, led by ten Beyond-alumni students from last year’s project as leaders. Before all the hammerings and brick layings began, the Beyonders initiated their visit to India by a series of orientations to learn about India through “India’s Habitat” activities. It really helped them to understand the entire project.

From the moment of arrival, the Beyonders were shocked by the awful smell coming from the rubbish all over town. Some kids were even walking on dirty and muddy grounds with their bare feet. The living conditions of Bawana were poorer than anyone expected as most of the people were living in ghetto-like places with tents covering the walls and ceilings. It was obvious that the place was vulnerable to the wind and rain.

The Beyond’s mission was to demolish ten old houses and build new and strong alternatives. The Beyonders were in groups of 10, teams to engage every stage of building the houses from flattening the ground to painting the walls.

After hours of diggings and knocking down walls, local kids who were at first hesitative came and showed friendliness. With several English phrases and desperate body language exercised by the Beyonders, the kids seemed to be quite entertained and amazed as we could see from their laughs and smiles. After witnessing the children smiling so brightly and following the volunteers, we realized why movements like “Beyond” were needed.

Everyone was pretty much exhausted when the volunteer were halfway through their tight scheduled activity, a reliable reinforcement arrived – Yong Won Yoon, Chairman, Managing Director of POSCO-India, and POSCO’s local employees. They expressed their appreciations for the Beyonders coming to India for the project. Everyone was now motivated with the same cause and went full speed ahead for the construction. 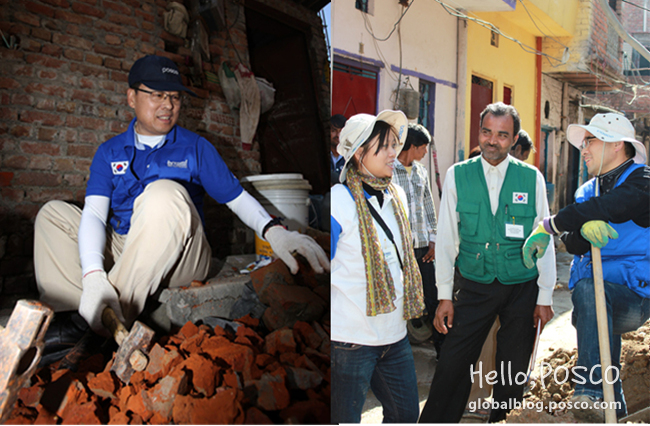 On February 10th, the Beyonders took a brief rest as it was the Lunar New Year. They visited The Taj-Mahal and wished a happy New Year for their families back in Korea.

Finally, the volunteer works for building the new homes were complete. A ceremony was held to celebrate those who would be living in the houses. Not only the Beyonders, but also local staff, families with new homes and the Bawana people attended the event at the town hall with a great festive atmosphere. While the ceremony was enjoyed by everyone, there was an infectious grin on the Beyonders’ faces as they left all the tiresome memories from hard works. 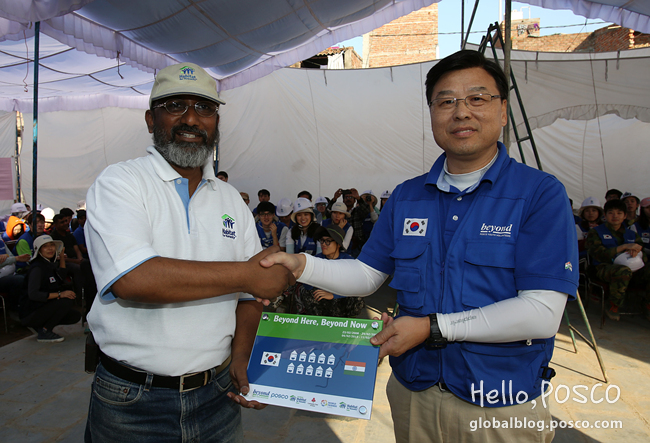 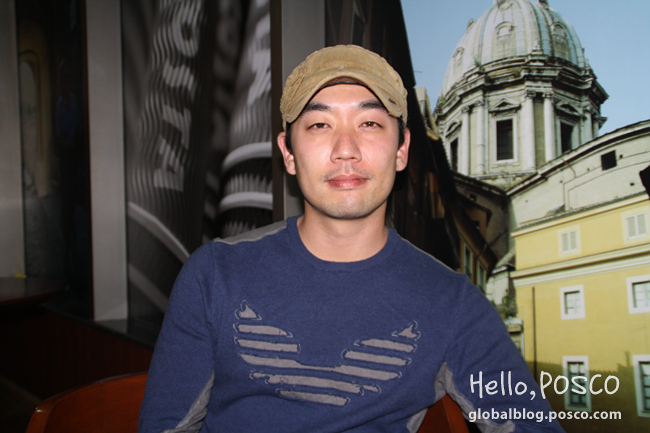 Q) What motivated you to join the POSCO Beyond?

Kim: About three or four weeks before I came here, the team leader of POSCO’s social contribution team recommended this program. I thought it would be a great chance as it was quite rare to work with POSCO and the project itself seemed to be a good opportunity to gain fantastic experiences related to my work in the PR department. Also, we could show to the media that POSCO’s affiliates are working horizontally and generating positive synergy effects volunteer activities.

Q) How do you feel after witnessing “Beyond”?

Kim: It’s not an everyday opportunity to work with university students and I feel great as if I’m receiving some positive energy from them. It feels wonderful being away from desk and doing “Beyond” activities so now I can go back to Korea filled with good spirit.

Q) Do you have anything to say to 100 Beyonders?

Kim: I have had experience working with human resources teams before. What I felt back then, was that there were so many talented youngsters. That’s probably why corporations prefer the talents with special experiences. As an older brother or sister, what I want to tell you guys is, work hard and study hard. But don’t forget to forge yourself with this kind of special activities. Go Beyond~! 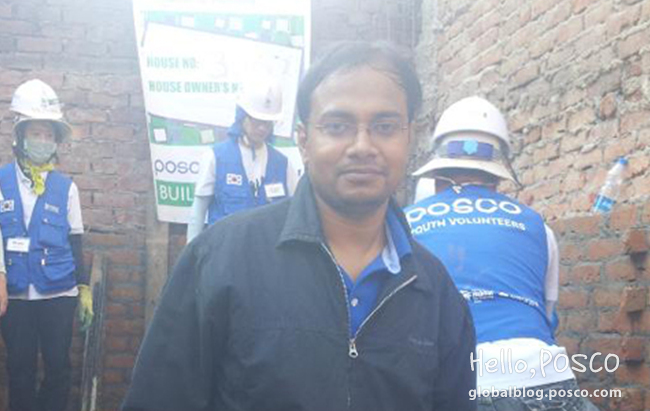 Q) How well is POSCO known in India?

Abitra: Although it is not as high as in Korea, after 7 years of POSCO’s operation in India, the corporation’s recognition has become much higher in comparison to two years ago.

Abitra: Indians and Koreans have different styles. As we are from different countries, our language habits vary quite dramatically. However, as we now understand each other, it is not regarded as a major barrier.

Q) You volunteered to work here today. How do you feel?

Abitra: It feels great. By participating in this volunteer work, I’ve realized how important it is for corporations to oblige social responsibility. I enjoyed working here and meeting new people as well. Also, I truly appreciate the Korean university students who came all the way to India. I hope this will play a positive role for their future.

Rajina, a resident of Bawana 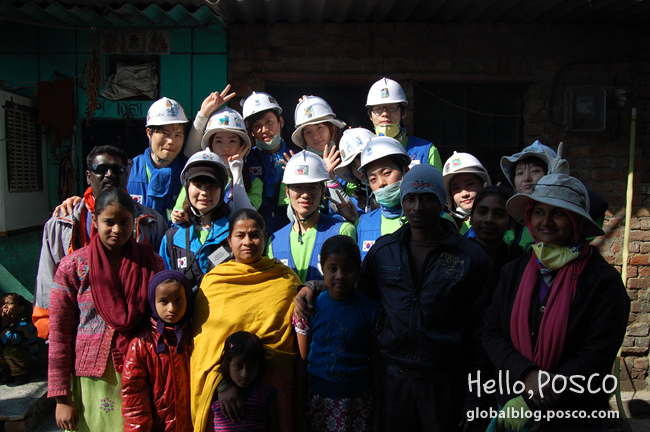 Q) What was it like before you had a new house?

Rajina: We had to move here because the place we were living was to be redeveloped. It’s been about 7 or 8 years since we settled here. We had to live in a house made of hays.

Q) What is your impression and image of the Beyonders?

Rajina: It’s been so much more supportive than the helps from the locals or other people. I’m really thankful because they treated us well and did all the dirty works without hesitations.

Q) Anything you want to say to the Beyonders?

A letter from Nadeem’s family, ‘Building the House of Love’ beneficiary 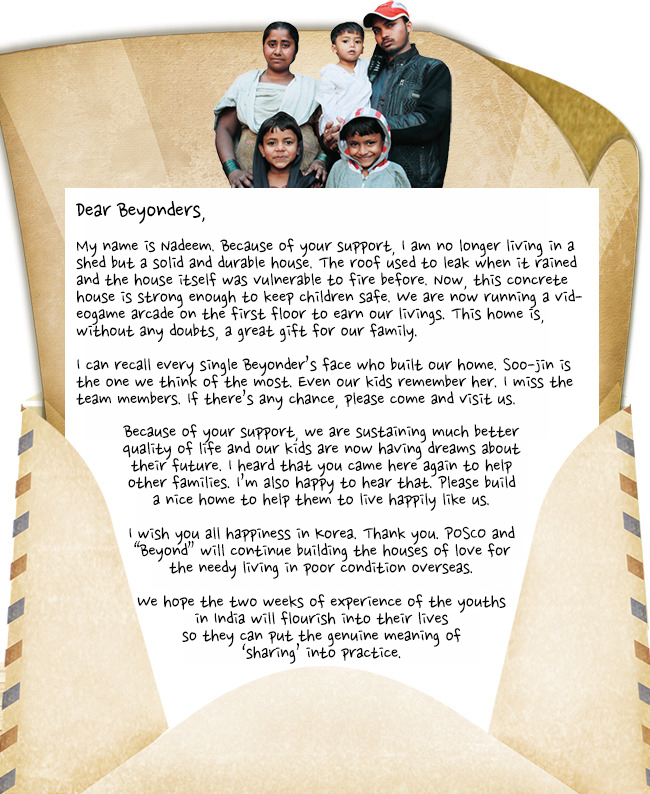