<Mother in the sea, Haenyeo> is the first exhibition supporting the task to formally seek adding the unique culture of female divers on the southern island of Jeju, “Haenyeo”, to UNESCO’s intangible heritage list for 2015. Sponsored by POSCO’s 1% Sharing Foundation, this exhibition runs from May 10 through July 3 at the POSCO Art Museum and highlights photographs taken by Korea’s celebrated photographer, Joon Choi. The exhibit captures the daily life of Haenyeo, female divers, and their resilience which allows them to harvest sea creatures and products for their living 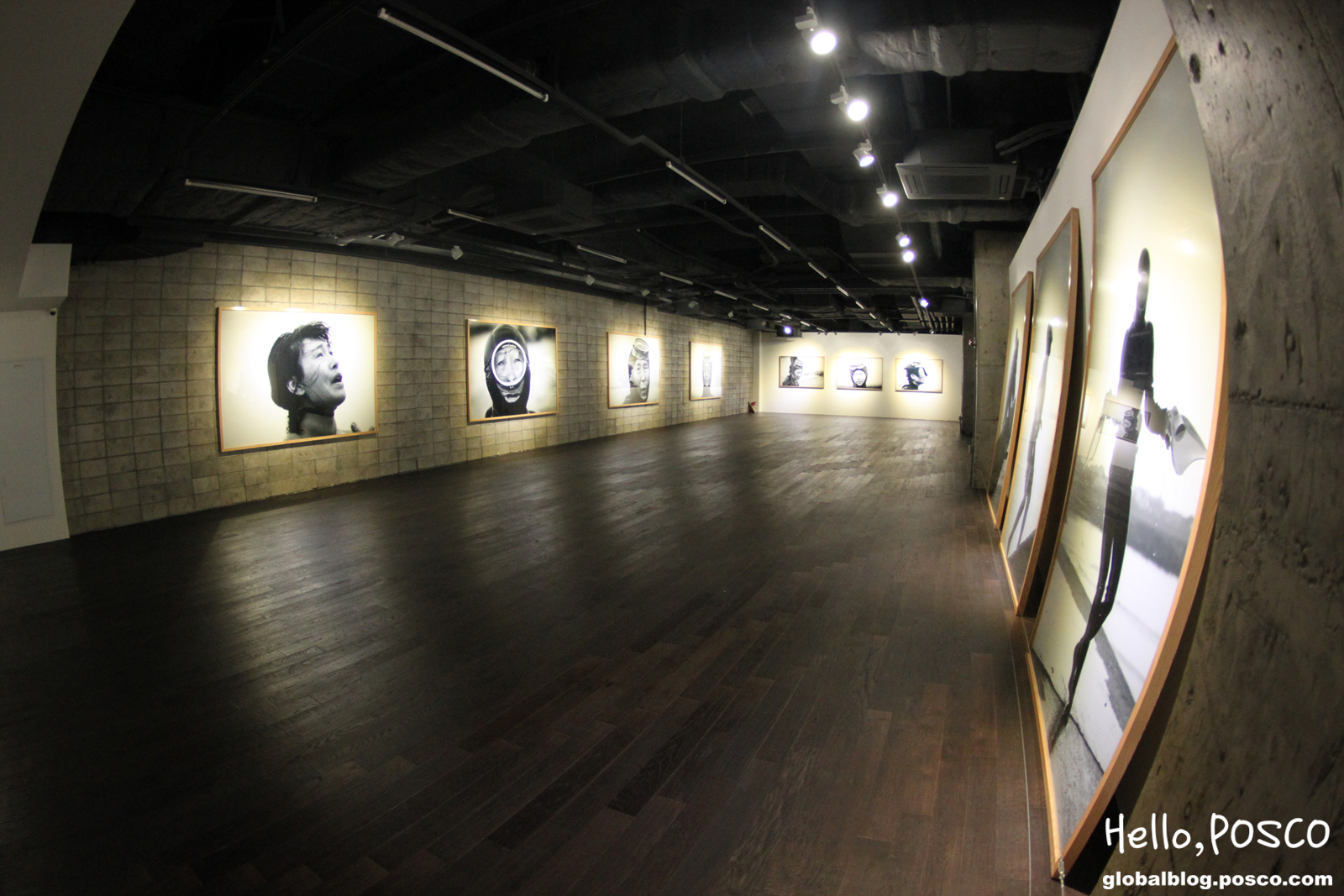 Pictured here: <Mother in the sea, Haenyeo> exhibition being held at POSCO Art Museum from
May 10~July 3, 2014 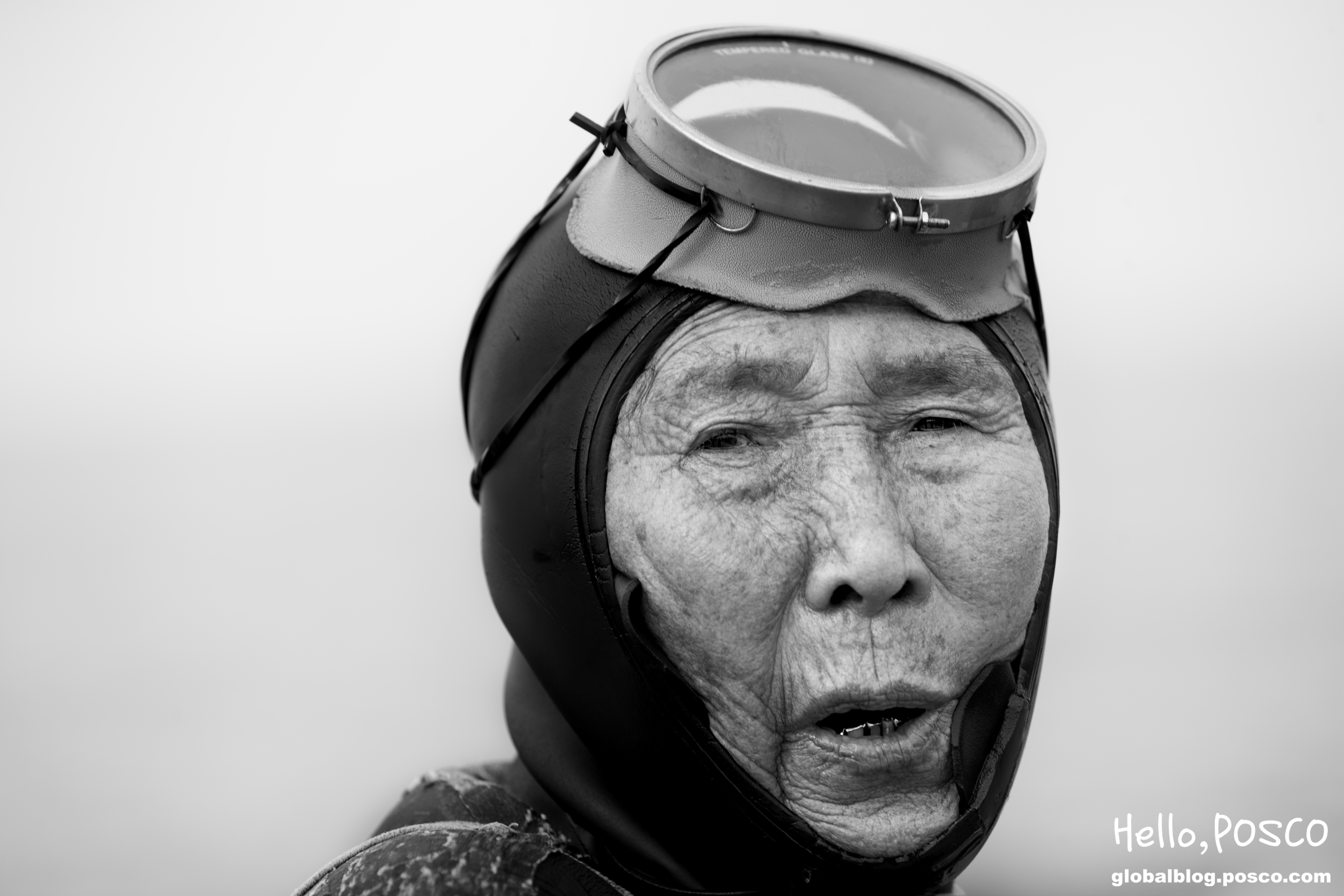 In 2013, Haenyeo were chosen by the officials at the Cultural Heritage Administration as South Korea’s candidate for the UNESCO List of the Intangible Cultural Heritage of Humanity for 2015. The Haenyeo culture is inherently Korean and is one of Korea’s prime intangible assets. However as Haenyeo travelled outside of Jeju, the culture spread to Japan as well. As the Korean government planned to register Haenyeo into the UNESCO list, the Japanese government has been making attempts to add a similar tradition of female divers to the UNESCO list as well with female divers called ama (あま). This has put the chances of Korea’s Haenyeo entering the UNESCO list at risk! 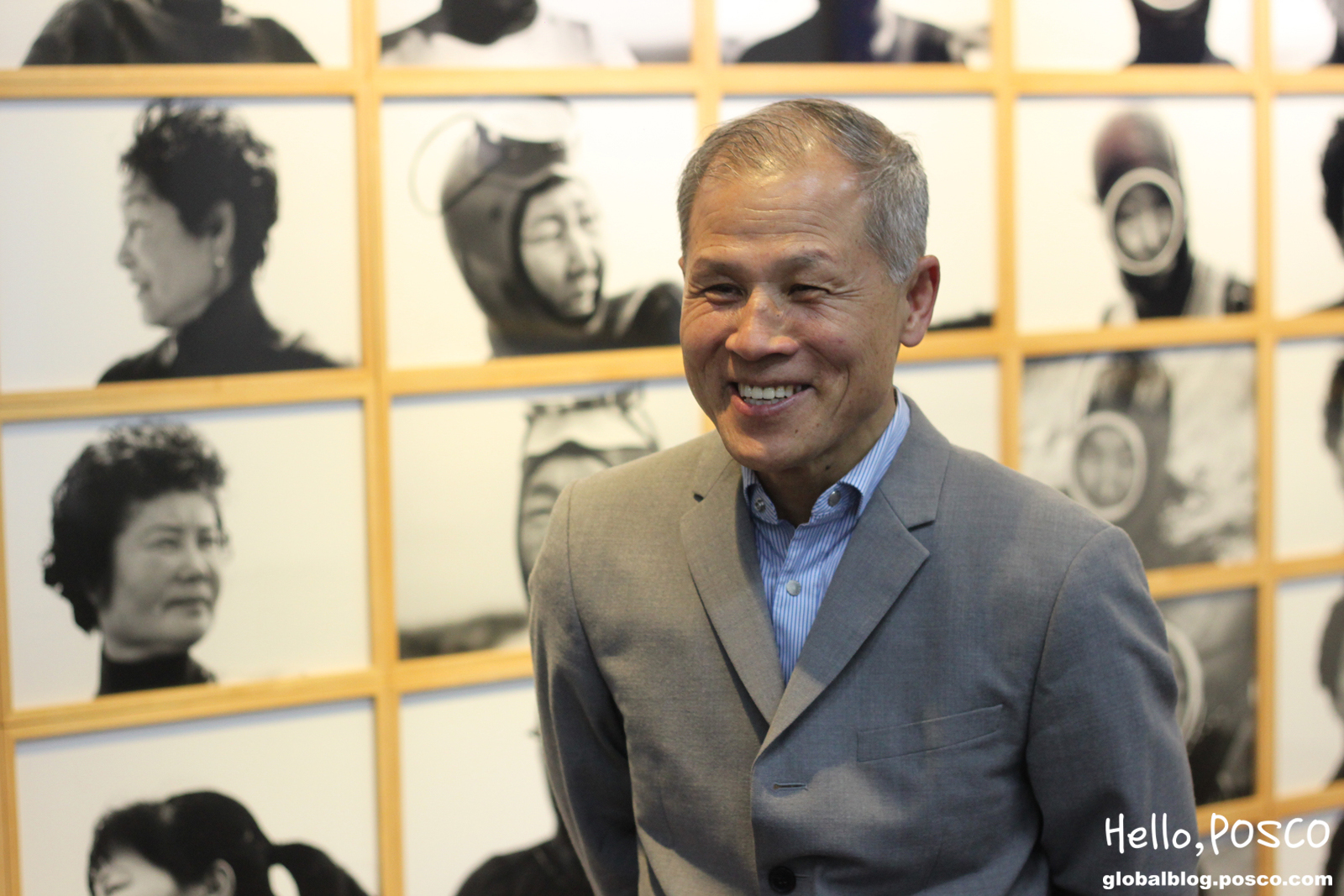 This exhibition highlights the work of one of Korea’s most celebrated photographers, Joon Choi. He tried to capture the trials and tribulations of Haenyeo in hopes to gather global support for them. Opening at POSCO Art Museum, the exhibition will be travelling to places around the world including Fukuoka National Museum and Miyazaki Museum in Japan, UNESCO headquarters in France, and Korea Culture Center in Brazil.

The title of the exhibition, <Mother in the sea, Haenyeo > represents the resilience of Haenyeo who must provide and be responsible for their families, much like greatness and care given by mothers.

If you are in Seoul or planning to be, here are directions and information. Admission is free! 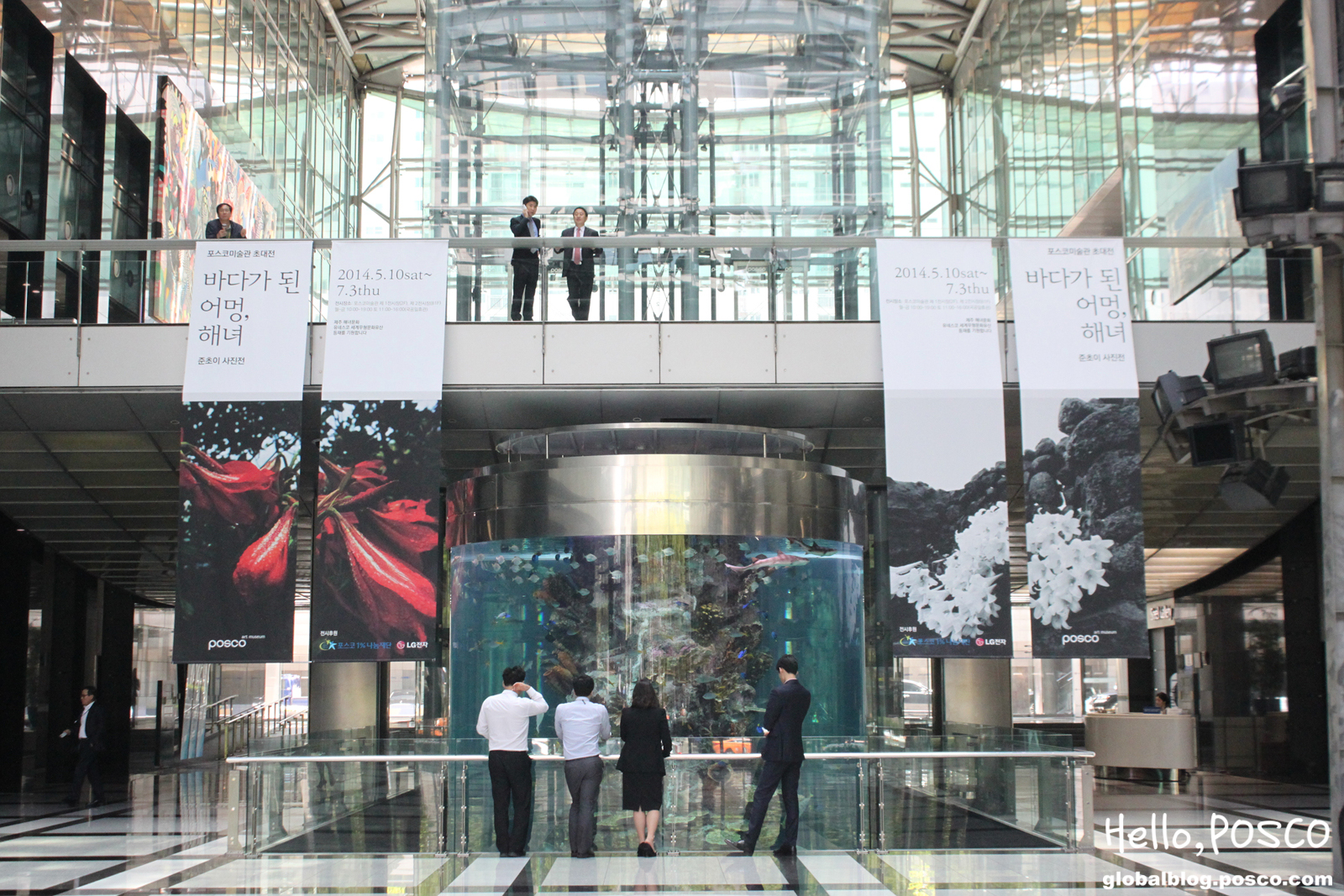 Photographer Joon Choi falls into the lives of Haenyeo 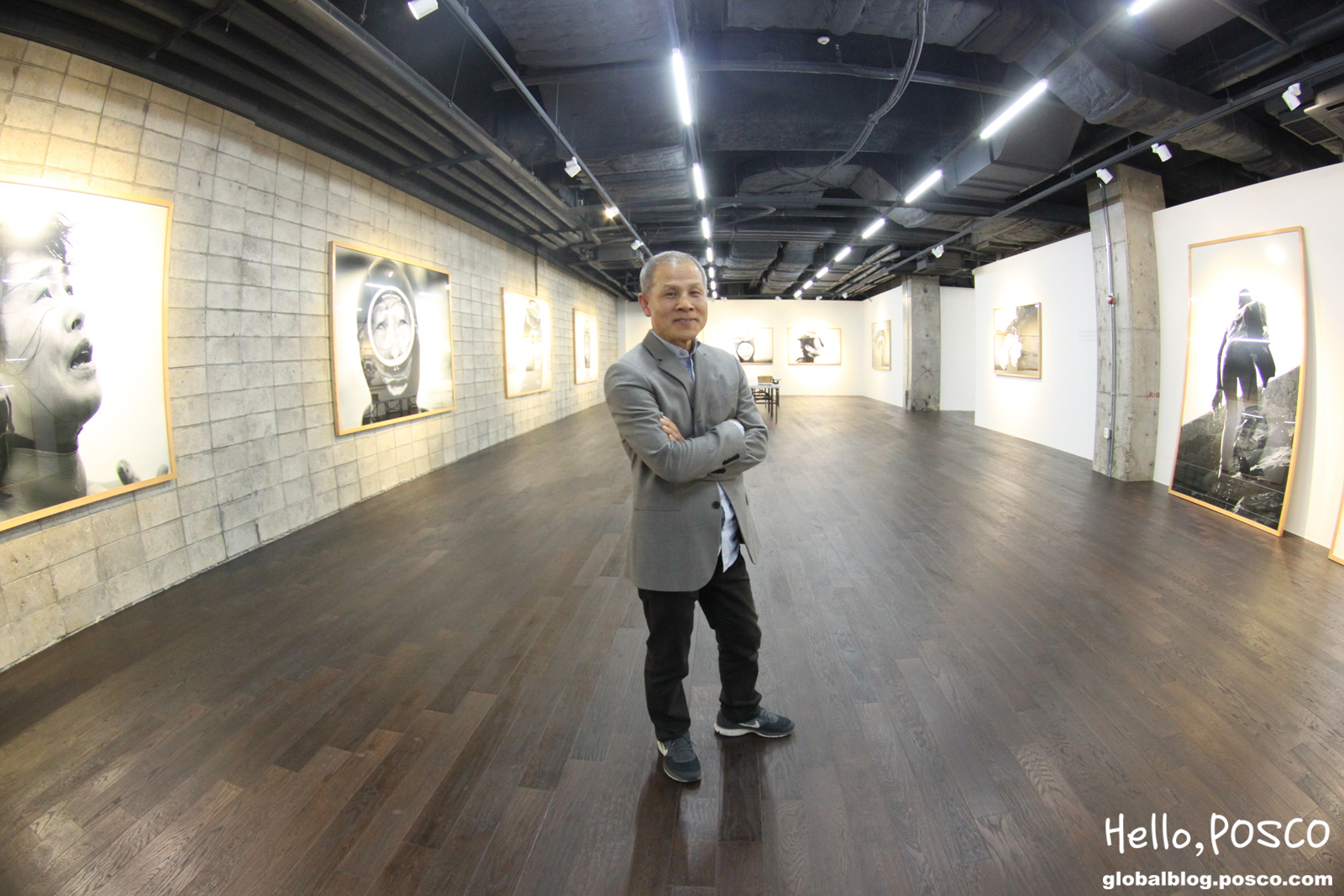 Pictured here: Joon Choi standing in the gallery space surrounded by his works of Haenyeo

So how did celebrated photographer Joon Choi become so passionate about Haenyeo? He studied in Tokyo and gained experience in New York. In 2005, he visited Jeju for an advertising shoot where he coincidentally met Haenyeo and which is where his deep interest in their lives began.

He began to observe the lifestyle of Haenyeo and was surprised by their resilience and will towards sustaining their livelihood. Furthermore, he made parallel comparisons of their way of life to that of a strong-willed mother. He could find comfort within the deep wrinkles of Haenyeo faces and felt the unconditional love and maternal instincts as proven by the rigors of their daily lives.

Pictured here: Captivating photograph of a Haenyeo by Joon Choi 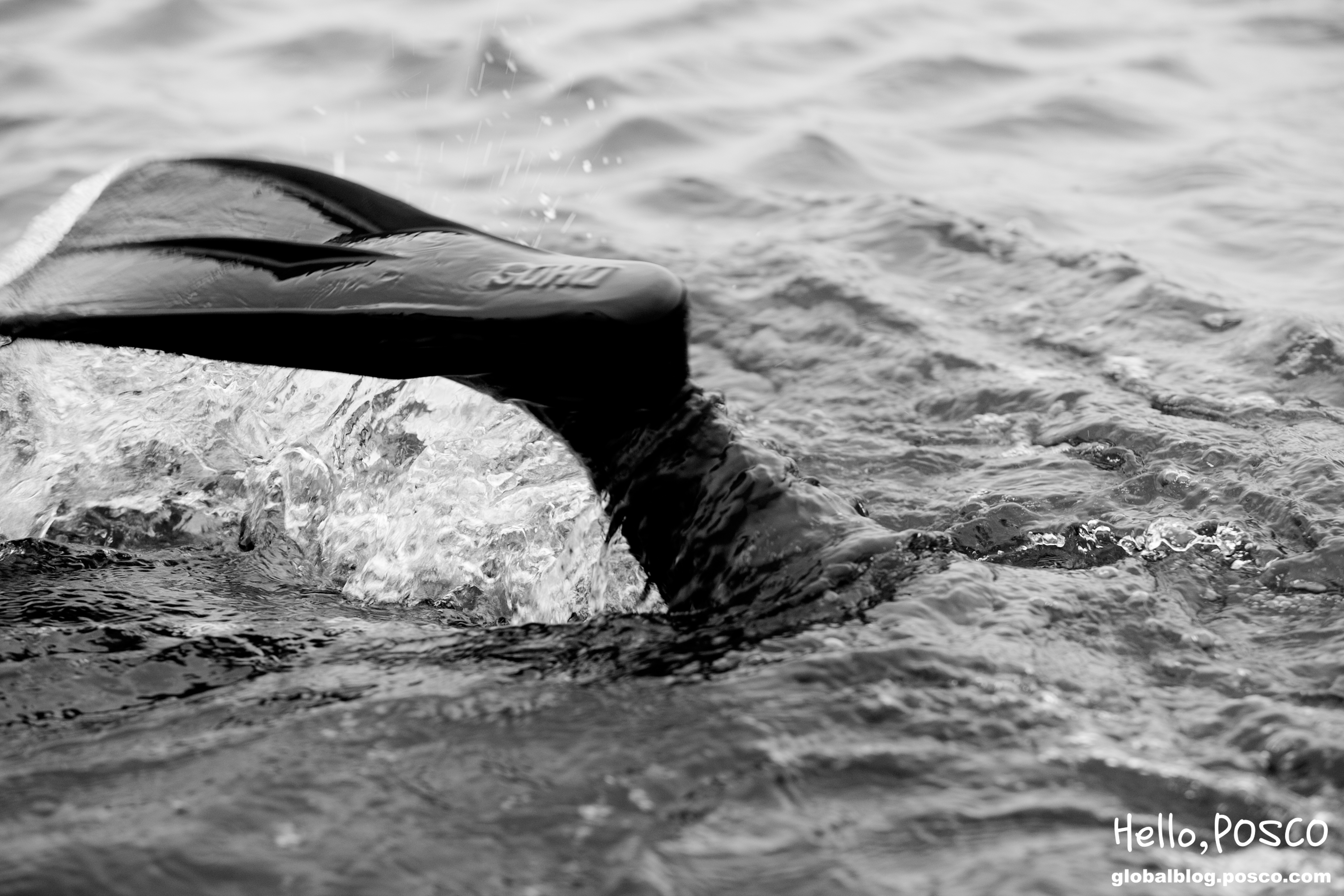 Pictured here: Splashing fin of a Haenyeo during a dive

He continued to make visits to Jeju to capture their lives with photography and in March of 2013, he visited the small island off of Jeju, Udo, to further capture moments of Haenyeo. As Joon Choi was doing this, he heard about the unfortunate news related to Korea’s Haenyeo diving culture at risk of not being recognized by UNESCO. Therefore, he decided that he wanted to share the photographs he had collected over the past 9 years to a wider audience. 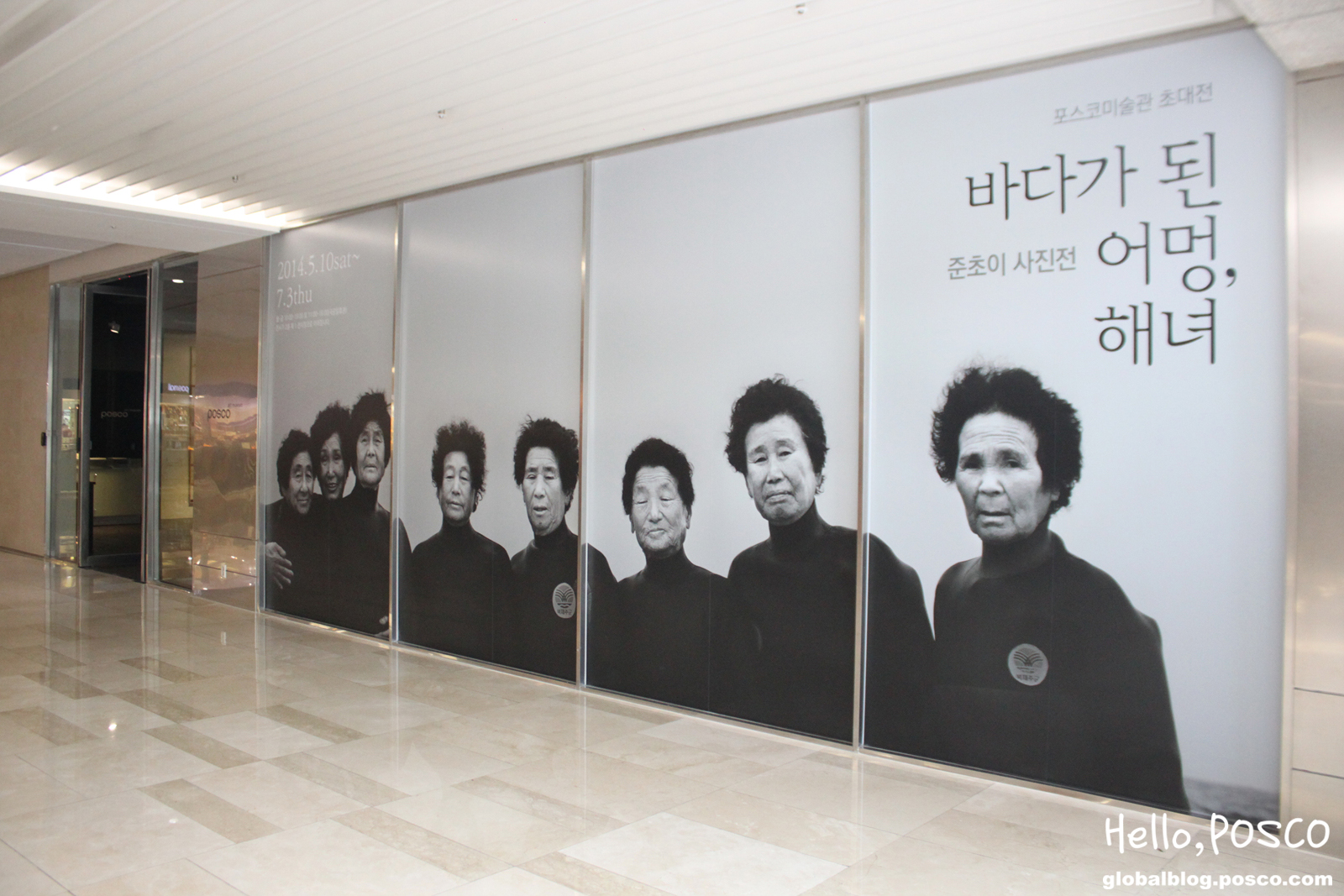 Pictured here: Entrance to the photo exhibit, <Mother in the sea, Haenyeo >

With the help of POSCO’s 1% Sharing Foundation which is making efforts to protect Korea’s cultural heritage, Joon Choi’s exhibition, <Mother in the sea, Haenyeo >, was able to become realized. The exhibition at POSCO Art Museum is showing about 160 works and is located in the original gallery space located on the 2nd floor as well as in the new gallery space opened on the lower lobby floor.

In an interview, Joon Choi mentioned that the most captivating aspect for Joon Choi was that Haenyeo were like the ‘sky’ and had an emotional beauty. He found beauty in how Haenyeo were always faithful to the basics. Moreover, he said “I see the beauty in the faces of Haenyeo which have withstand the sea winds because they show both a strong and delicate façade. They have an aura that extends beyond the outer appearance which reflects the story of their lives felt by their whole bodies.” 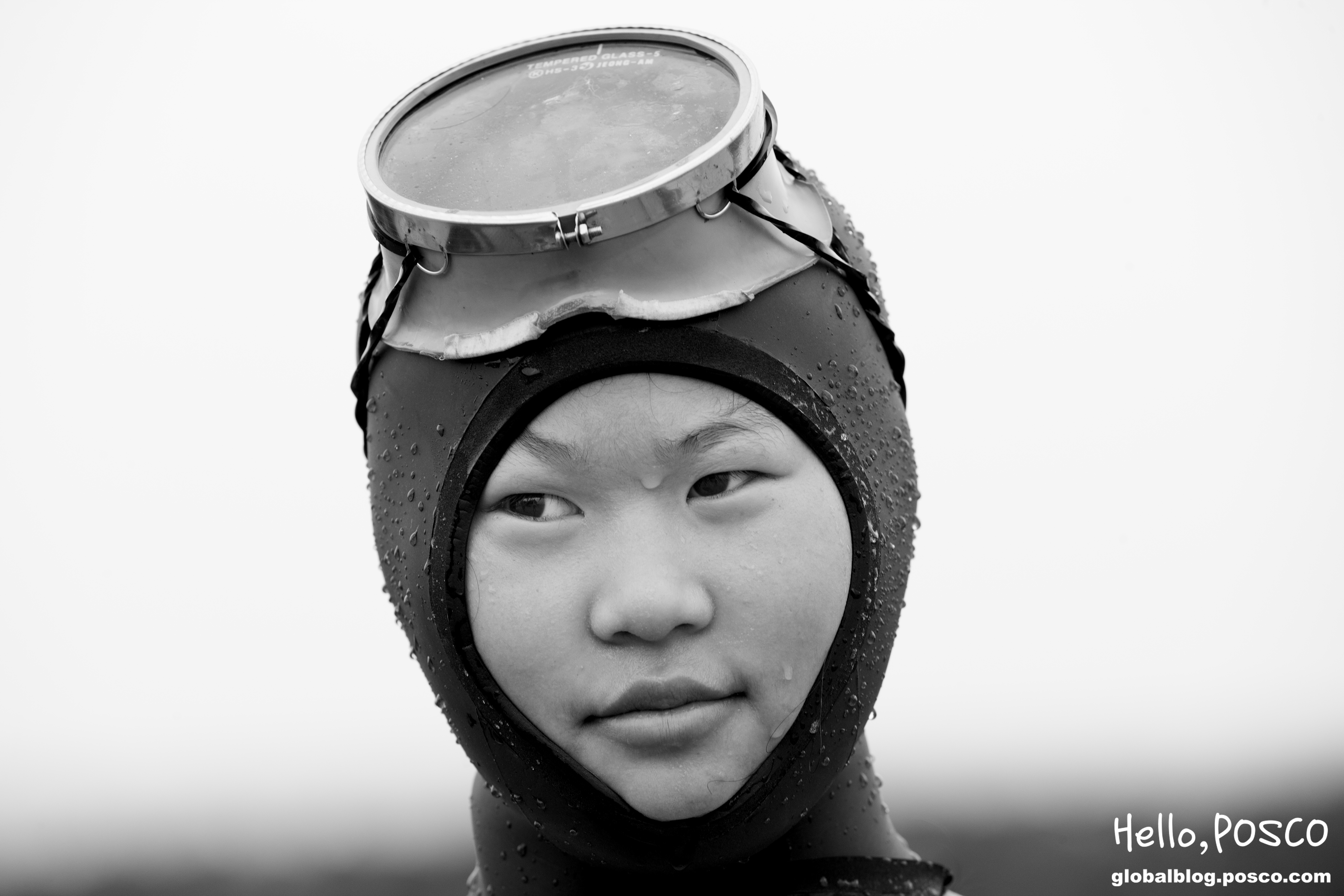 Pictured here: Photograph of the youngest Haenyeo by Joon Choi 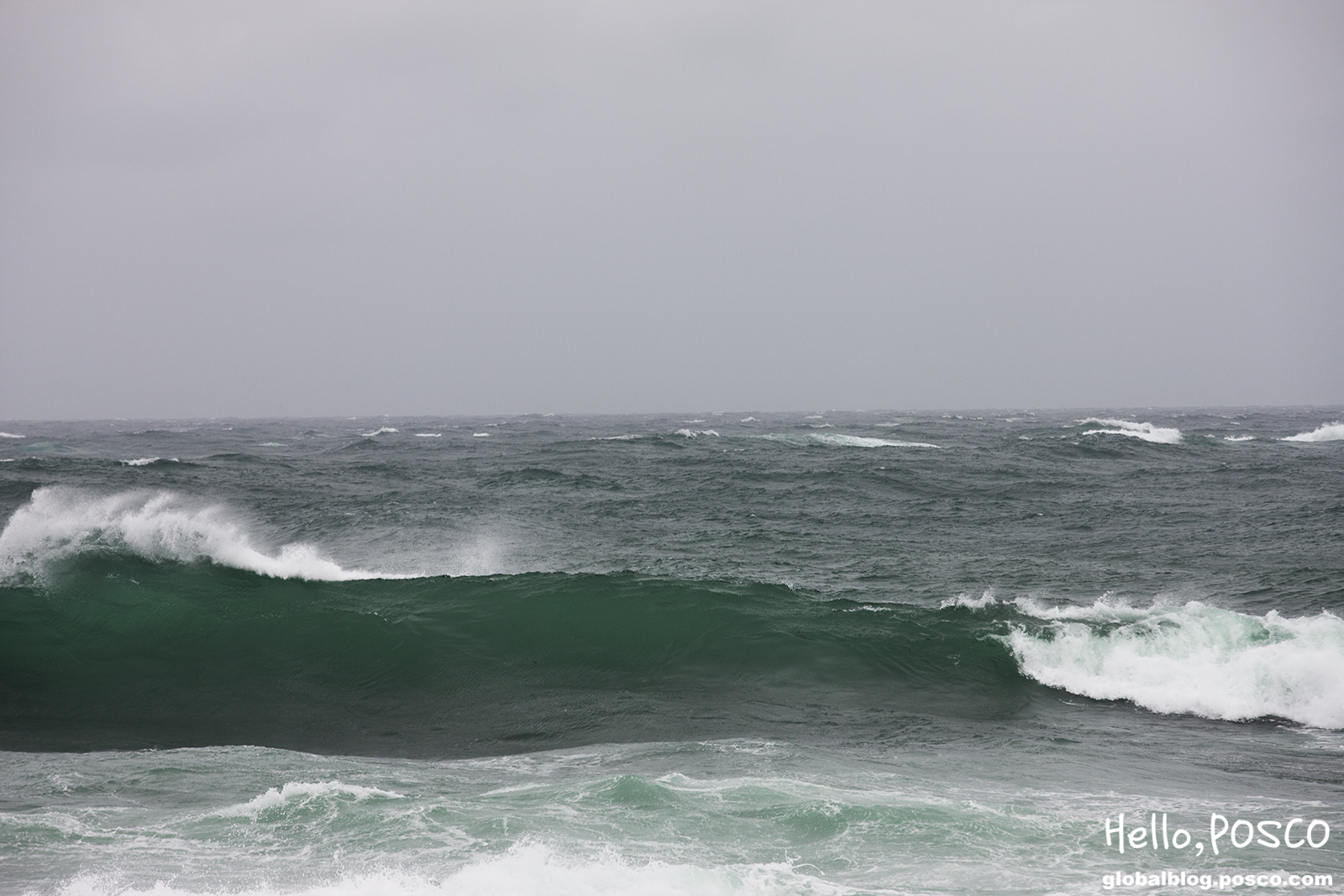 Jeju’s Haenyeo is a unique cultural heritage of Korea! Great support is needed to ensure that Haenyeo can be rightfully recognized as part of UNESCO’s intangible heritage list for 2015. We hope that the special exhibition highlighting Joon Choi’s works at POSCO Art Museum will inspire you to provide support for this cause! 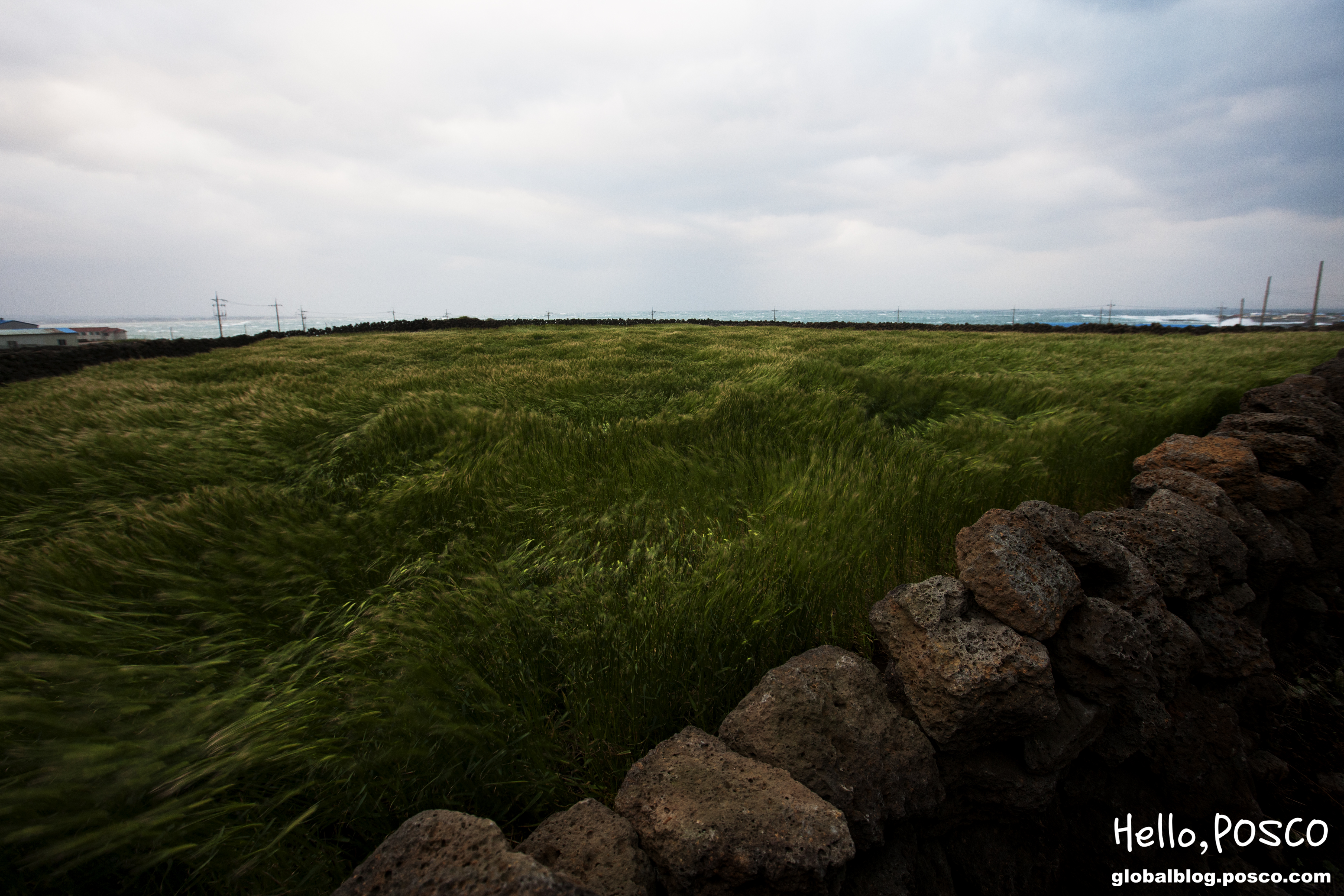