One Billion POSCO Grows with Korea

46 years have passed since the historical moment in June 1973 when POSCO’s Pohang No. 1 blast furnace produced its first molten iron. After enduring the times of highs and lows with Korea’s key industry stakeholders, POSCO just made yet another history — the company’s cumulative crude steel production broke one-billion record.

A half-century ago, POSCO was a just new ‘kid’ in the industry but now, the company proudly ranges with the world’s top steelmakers.

One billion. The number itself is remarkable, of course, but there are countless details the number alone can’t fathom. To dig deep into what it all means, POSCO Newsroom traces the footsteps that led to the one-billion record. POSCO Newsroom reports.

l The Footsteps that Created the Legend 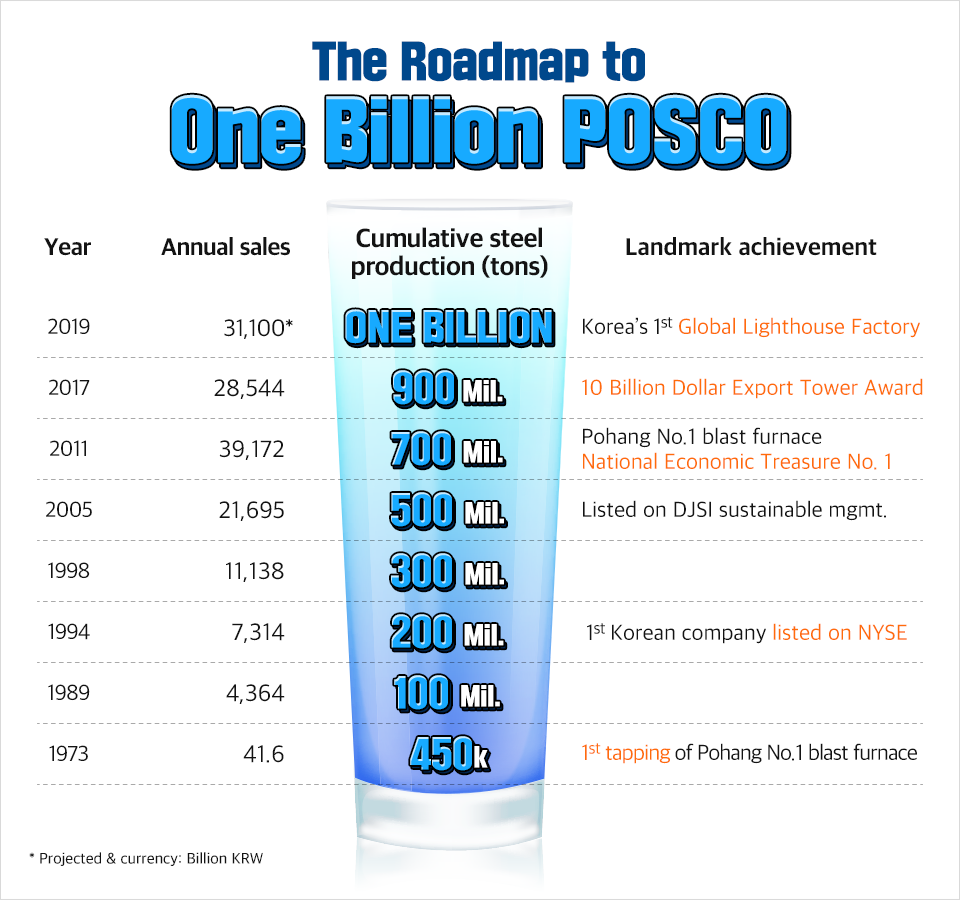 In 1994, POSCO achieved the crude steel production of 200 million tons. In the same year, the company also was listed on the New York Stock Exchange (NYSE) before any other Korean company. In 1998, POSCO’s production shot through 300 million tons, followed by 500 million tons in 2005. 2005 also marked the first year POSCO made the DJSI list for its sustainable management practice.

* DJSI Dow Jones Sustainability Index:
Launched in 1999, the DJSI evaluates a company’s sustainability performance — it’s the longest-running global sustainability benchmark worldwide and has become the key reference point in sustainability investing for investors and companies. The DJSI assesses various issues including corporate governance, climate change mitigation, and labor practices reflecting the trend to reject companies that do not operate ethically.

In 2011, the year when the cumulative crude steel production broke 700-million mark, Pohang No.1 furnace was selected as Korea’s economic National Treasure No.1 by domestic media. The company went on to received the prestigious $10 billion Export Tower award in 2017 — and finally this year, shortly after its selection of global lighthouse factory, POSCO achieved a cumulative steel production of one billion tons. The year 2019 is also the tenth year POSCO came in the top of the WSD competitiveness ranking, solidifying its stature as the No.1 steelmaker. In each year towards POSCO’s steady race to one billion, POSCO left marks of growth, both big and small.

The one-billion production was not an event created overnight. It was a long, arduous and enduring process holding the heart and souls of people in and out of POSCO communities. 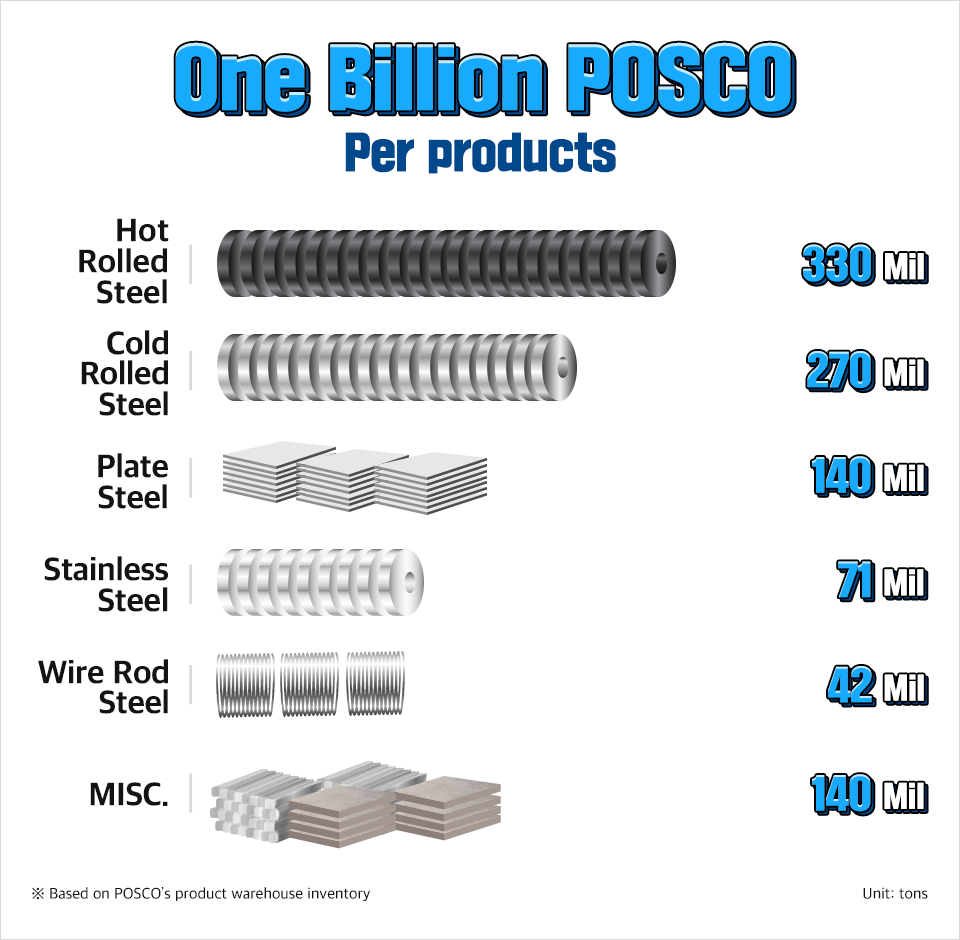 Tracing POSCO steel across different product categories —such demand industries as automobiles, construction, industrial machinery— the hot-rolled steel was the most sought-after, with 330 million tons in sales volumes.

l One Billion POSCO Went to…

POSCO Newsroom zoomed in on the demand industries to which POSCO steel was sold for the past ten years. With 340 million tons of steel sold across industries, the auto industry and construction sector (including machinery and pipes) took 83 million tons each. The shipping industry took another 29 million tons, whereas the electrical and electronics sectors took 22 millions. 120 million tons went on to be utilized for pressure vessels, re-rolling, surface treatment, distribution, etc. To grasp what this series of numbers in millions, let’s convert these sales volumes into one billion tons of crude steel production. 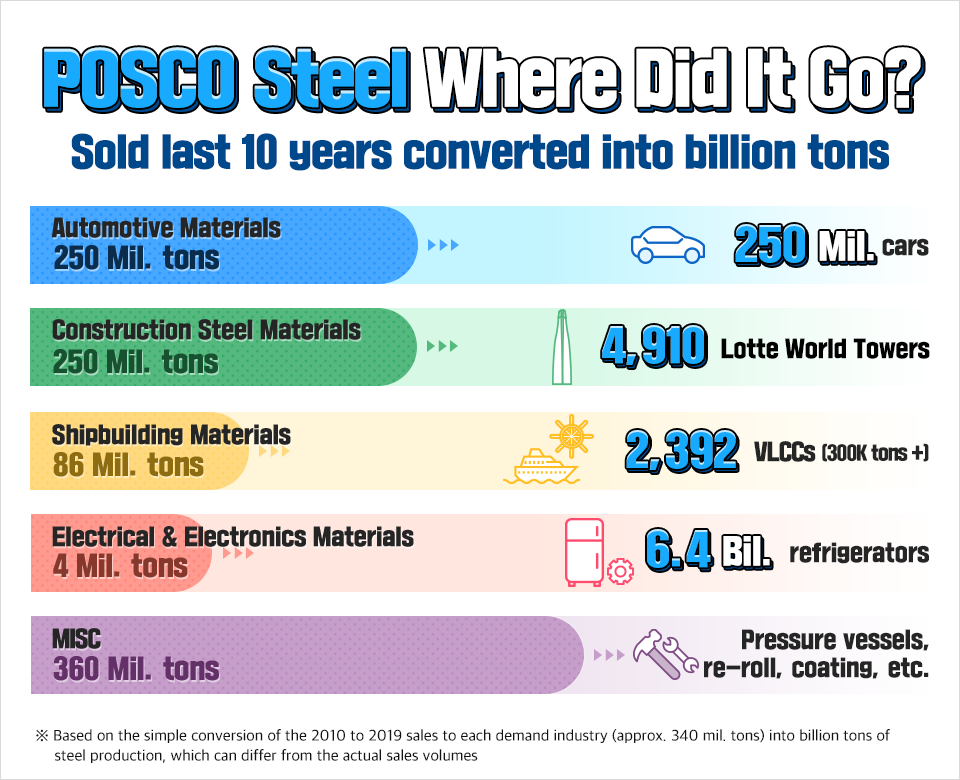 What about the construction sector? 250 million tons can raise 4,910 Lotte World Towers.

The above numbers mean much more than the sheer scale of POSCO’s steel production. What they show is the fact there had been sustainable demand for steel, and that the growth of Korea’s key industries coincided with the fate of POSCO. 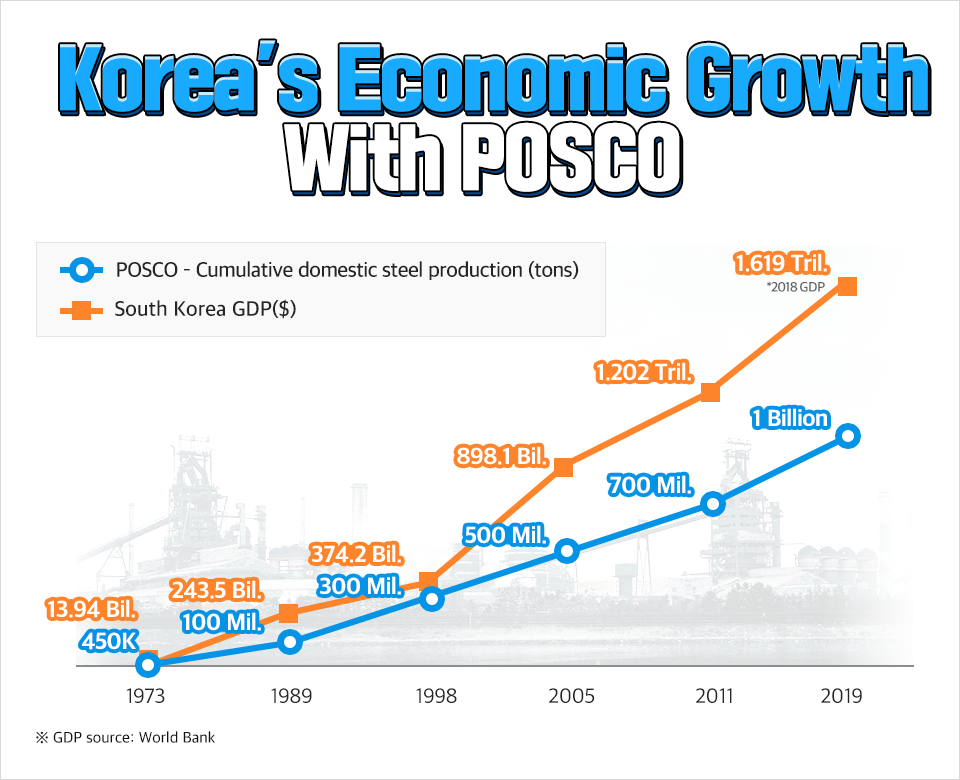 As Korea’s industries became more sophisticated and advanced, so did the country’s economic power. As the above graph demonstrates, both the historical data of Korea’s GDP and POSCO’s steel production are heading towards the same direction.

In 1973, when POSCO first produced crude steel, Korea’s GDP stood at $13.9 billion. In 2018, at the cusp of the one-billion mark, Korea’s GDP shot through the sky with 1.6 trillion, 116 times that of 1973. With the development of Korea’s downstream industries, the country’s economy advanced — so did POSCO.

As POSCO runs towards the next billion, POSCO’s unwavering support for Korea’s key industries and the global community will continue.