In 2009, the United Nations General Assembly declared July 18, the day the late president of South Africa (1918-2013) and anti-apartheid activist was born, Mandela Day.

Mandela Day is a global movement to honor his lifetime of service for South Africa and the world. During his lifetime, Nelson Mandela not only helped bring an end to apartheid in South Africa but was also a global advocate for human rights.

As a member of the African National Congress party beginning in the 1940s, he was a leader of both peaceful protests and armed resistance against the white minority’s oppressive regime in South Africa. Although his actions landed him in prison for nearly three decades, his limitless compassion and patience to change the world for the better made him the face of the anti-apartheid movement globally. After his release in 1990, he continued to fight against apartheid and in 1994 became the first black president of South Africa. He remained a devoted champion for peace and social justice until his death in 2013 at the age of 95.

In honor of this year’s Mandela Day, The Steel Wire takes a look at some of the most significant events of his lifetime as well as uniquely designed steel monuments to represent his life and legacy.

On August 5, 1962, armed apartheid police arrived at an otherwise ordinary road outside of Howick, Kwazulu-Natal in South Africa and captured Nelson Mandela, pretending to be a chauffeur. It was on this day Nelson Mandela’s “Long Walk to Freedom” began and irrevocably changed the history of South Africa.

Today, on this significant piece of land stands 50 steel columns named Release. Built in 2011 by South African artist Marco Cianfanelli who is famous for his bold public art pieces and sculptural works made of steel, these steel columns are between 8 to 10 meters tall. They are suggestive of prison bars and represent the 50 years since Nelson Mandela’s arrest as well as the idea of many making a whole. They are arranged in a pattern that allows the viewer to see a flat image of the face of Nelson Mandela in full focus when standing at least 35 meters away as seen in the below image.

Cianfanelli calls his sculpture Release because the “arrangement of the columns create a sense or moment of fracture.”

Long before his arrest, Mandela had a thriving law practice to help others who were accused of crimes against the state. Between 1952 and 1956, Mandela and South African anti-apartheid politician Oliver Tambo operated South Africa’s first ever black law firm out of a three-storey Chancellor House building in Johannesburg. They helped countless black citizens who needed help securing passes which were obligatory for them to carry at all times.

Today, in front of Chancellor House, there stands another uniquely designed steel sculpture created by Marco Cianfenelli in 2013.

Aptly named the Shadow Boxer, the sculpture was inspired by the legendary Bob Gosani’s 1950s photograph of Mandela sparring on a Johannesburg rooftop. The impressive 6-metre-tall painted steel statue has an interesting design feature. Its unique lighting allows the sculpture to cast a shadow onto the court building behind it. The sculpture is multifaceted, made up of layers of painted metal sheets.Cianfanelli added red to the statue to emphasize the sculpture and to tie in with the color used on Chancellor House. 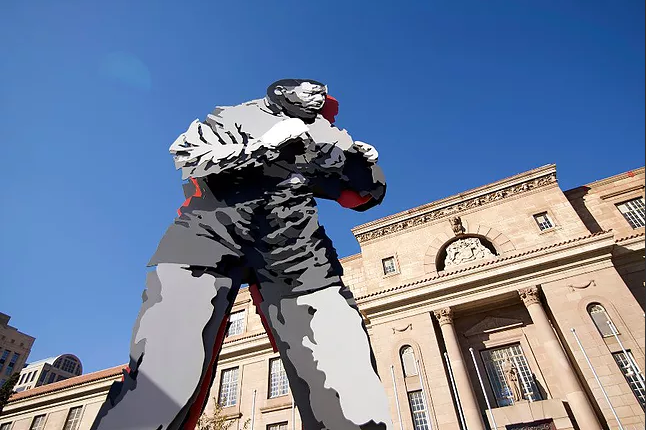 The sculpture is an unusual piece that captures Mandela the boxer rather than Mandela, the political figure. Mandela’s explanation for his love for boxing in his autobiography, Long Walk to Freedom, shows how he was able to maintain a physical-fitness regimen in his impossibly small cell on Robben Island as well as his dignity in the face of unimaginable hardships.

“After a strenuous workout, I felt both mentally and physically lighter.  It was a way of losing myself in something that was not the struggle. After an evening’s workout, I would wake up the next morning feeling strong and refreshed, ready to take up the fight again.”

The 50 steel column sculpture and the Shadow Boxing statue will continue to remind the world of Mandela’s legacy and efforts to spread democracy, freedom and equality.