Blast furnaces play a central role in the steelmaking process. They date back to ancient times, to the beginnings of iron smelting. Today, blast furnaces turn out the molten iron used in steel production, and thus have helped industrialize the world and lay the foundations of global monumental infrastructures.

So, what does a blast furnace do in the steelmaking process? There are 4 main parts to the process of making steel, and in each process, the accompanying production equipment is as vital as the materials that make steel. Each batch of steel starts off with iron, molten iron to be exact, and the blast furnace is what transforms raw materials into molten iron.

Molten iron leaves through the bottom of a blast furnace

Molten iron comes from two raw materials; iron ore and coal. First, iron ore is converted into sinter ore in a sintering plant and coal is converted into raw coke using a coke oven. The processed materials are then poured into a blast furnace through the top opening. Hot air reaching 1200℃ is blown in from the bottom through tuyeres and chemically reacts with the materials as they fall to the bottom of the blast furnace. This process oxidizes the coke and reduces the sintered ore, creating molten iron. The molten iron is then further processed to make steel.

The Importance of the Blast Furnace

The Blast furnace is one of the oldest and most significant equipment in the steelmaking process. The average lifespan of a blast furnace is about 15 years before it needs to be replaced or refurbished.

The Pohang No.1 blast furnace

POSCO is a few months shy of its 50th anniversary, and the Pohang No.1 blast furnace has been in operation for 45 of those years. Interestingly, the blast furnace has never broken down or gone out of service. With an annual capacity of 1.3 million tons, it helped establish Korea as the top-5 steelmaker in the world and was even named Korea’s Economic National Treasure No.1.

A New Technology from an Old Furnace

In the beginning of 2017, POSCO decided to shut down the Pohang No.1 blast furnace for good in response to the slowing steel market and put the national treasure in a museum instead. It seemed the oldest operating blast furnace in Korea would finally retire.

However, just before pulling the plug, engineers used the Pohang No.1 blast furnace in a pilot operation program using low-grade raw materials such as soft coke and low-cost iron ore to produce molten iron. To everyone’s astonishment, it succeeded, and with lower charter costs than the larger blast furnaces that have 3 times the production capacity.

As it turns out, because of its smaller size, the blast furnace can operate with low-grade raw materials such as soft coke and low-cost iron ore, and can flexibly adapt to fluctuations in operations. Employees further developed the technology and as a result, Pohang No.1 blast furnace recorded the lowest charter costs of all POSCO blast furnaces in April this year.

Thanks to the new-found technology, the legacy of the Pohang No.1 blast furnace will continue.

What’s the Secret to Longevity?

Usually, a blast furnace needs to be sprayed down every 6 months so that it does not get damaged from temperatures that can reach up to 2000℃. The bottom of the blast furnace is where the heat is concentrated, thus most susceptible to damage. Furthermore, fluctuations of the internal gas composition can lead to explosions. To solve this problem, POSCO’s technicians developed a technique to lower the coke to below the tuyere and repair the bottom of the blast furnace. This technology was applied to other furnaces and maintenance systems and is still in use today. 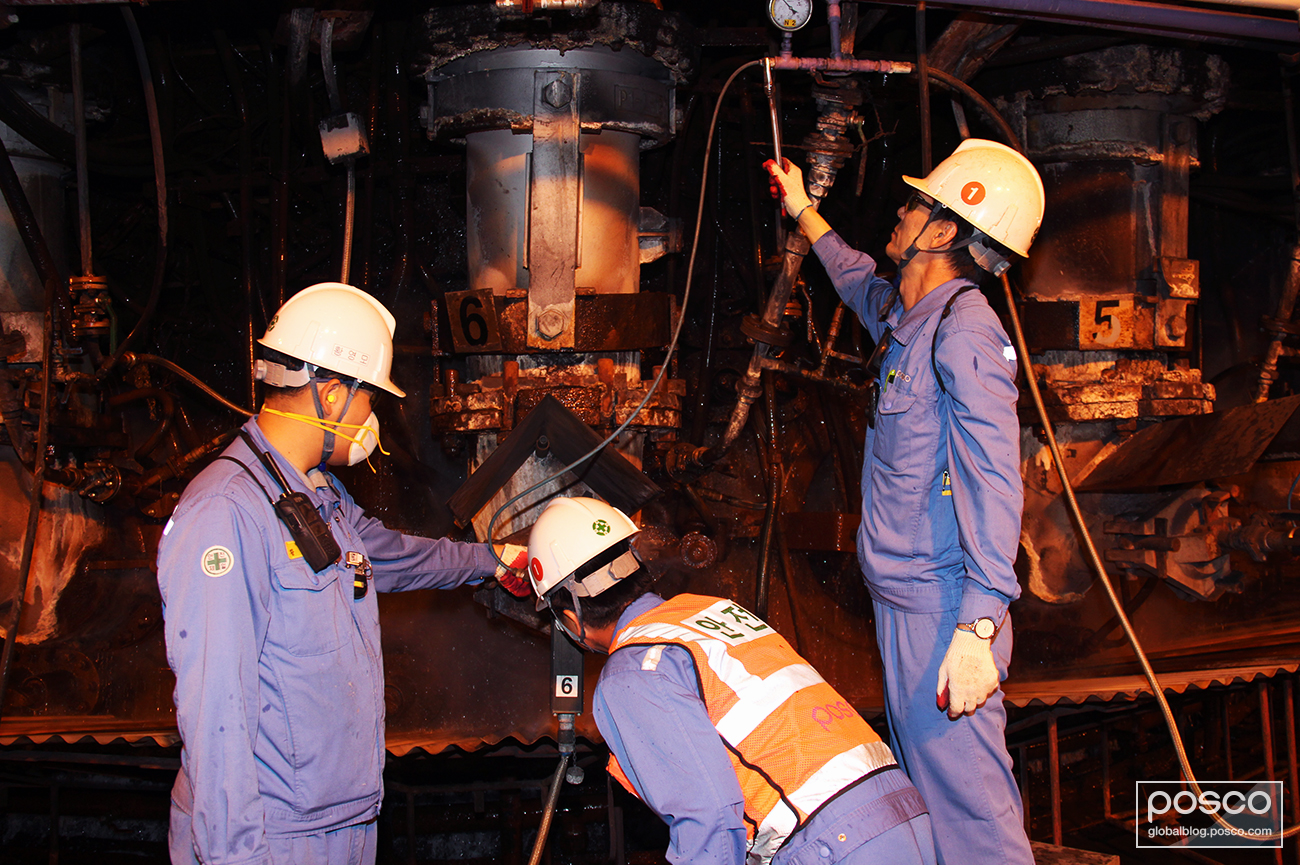 The Pohang No.1 blast furnace’s TFT during maintenance

In a matter of months, the furnace went from almost becoming an artifact to a central part of POSCO’s competitiveness. This blast furnace’s long history in itself is impressive, but with its recent transformation, there is no telling what greater innovations and technology POSCO will achieve.