On June 4, Korea Iron & Steel Association (KOSA) hosted the 20th Steel Day and SteelKorea 2019 at POSCO Center in Seoul – about 400 industry stakeholders attended the event including Vice Minister Seung-Il Cheong of the Ministry of Trade, Industry, and Energy (MOTIE) and POSCO CEO Jeong-Woo Choi who is also the Chairman of KOSA. 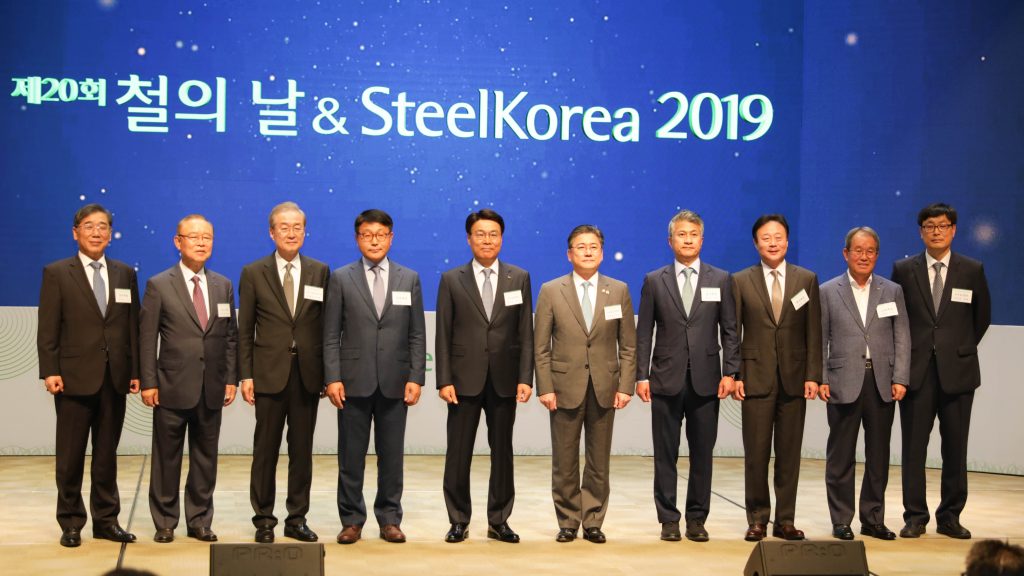 In the opening remarks, POSCO CEO Jeong-Woo Choi announced, “The steel industry is facing many challenges – trade sanctions and environmental concerns such as the fine dust. We have more obligation towards our community. The steel industry will take a proactive approach and collaborate with the government to help curb air pollution in Korea. By 2021 we plan to invest over 1.5 trillion KRW.”

Song-Mook Jung, a General Manager at POSCO received the Order of Industrial Service Merit (Bronze Tower). He pioneered the application of deep learning algorithms in the steel industry which led to technology that can predict blast-furnace operation. His insight also brought automatic control into the picture. Bang-Seop Lee, the union head of the Hwanyoung Steel Ind. Co., Ltd. received the Industrial Service Medal for his contribution to establishing a mature union-company culture.

Yoon-Gih Ahn, the Senior Vice President of POSCO Research Institute (POSRI), received Presidential Citation. He provided a reduction target for green gas emission. His initiative was unprecedented, serving as a model when it comes to the proactive response towards global environmental concerns.

SteelKorea 2019 also acknowledged several POSCO personnel through ‘Steel Technology Award.’ First launched in 1982, the Award encourages creativity and research endeavors within the steel industry. Altogether five awardees from POSCO received due recognition for their contribution to the industry.

This is the first year SteelKorea event is being held alongside the Steel Day Tae-Ho Bark of Lee & Ko, Korea’s top international law firm, gave a special lecture on ‘Global Trade: Outlook and Strategies.’

In the lecture, Bark acknowledged the challenges the steel industry is facing, such as overcapacity and trade sanctions. He emphasized the importance of high-value product, diversification of export routes, and preparing for regional competitions. “Close collaboration with the government is crucial,” he said.

The afternoon sessions of SteelKorea 2019 included seminars on such topics as fine dust, EU regulations of steel slag and environmental issues such as the sustainability of steel. North-South Korea cooperation in the steel industry, PNG (Pipeline Natural Gas) projects as well as the various trade sanction cases were also discussed.

As for the environment-related topics, LCA was one of the key subjects. The panels discussed government-collaborative measures on how to campaign for the sustainability of steel from the holistic LCA perspective. Steel industry’s effort to curb air pollution was also one of the key topics. Along with the press, researchers and scholars from various institutions attended the session.

On June 5, the second day of the SteelKorea 2019, the Korean Institute of Metals and Materials hosted ‘Steel Technology Symposium.’ The Symposium addressed the key topics of the industry, including government policy on steel industry coproducts and technologies that can utilize a large quantity of steel slags.