POSCO, on August 31st at the ‘Istanbul-Gyeongju World Culture Expo, held in Istanbul, Turkey, opened their POSCO booth to proactively promote the company to expo attendees. As of September 9th, 24,000 attendees visited the POSCO booth and experienced the status of Korea’s representative steel company.

On August 31st, ten hours prior to the opening of the expo, the POSCO booth, which was located at the Beyazit Meydani (square), was opened with the attendance of 30 personnel including Executive Director Lee Bokseong and POSCO ASSAN TST President Kwon Jongwon, as well as POSCO officers.

Executive Director Lee Bokseong, in his congratulatory speech, said, “We expect that this event will promote our local subsidiaries and companies including POSCO ASSAN TST•POSCO TNPC, which are the bases to enter the Europe steel market.” 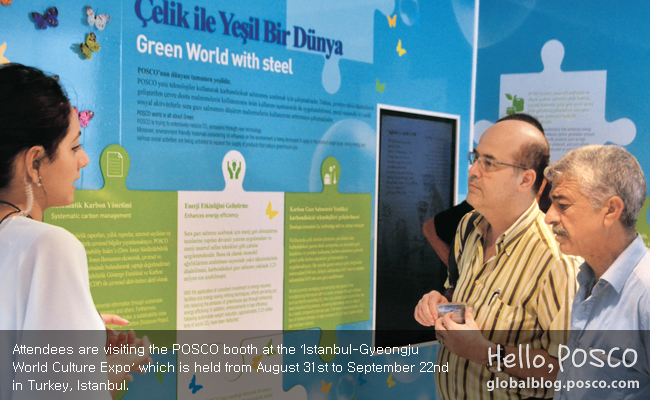 The POSCO booth titled ‘POSCO Steel Gallery’ is designed as a gallery type of exhibition. The POSCO booth is the only corporate booth located at Beyazit Meydani and will be open until September 22nd, for 23 days.

The booth is divided into the ‘Gallery Zone’ and ‘Culture Zone,’ where the ‘Gallery Zone’ features the steel civilization which started in ancient Turkey as well as the introduction of 《Jikji Simche Yojeol (Anthology of Great Buddhist Priests’ Zen Teachings)》 which is the world’s first book printed from metal blocks, up to POSCO’s steel products and the global chain including affiliates and local subsidiaries.

Further, to promote the local subsidiary in Turkey, social contribution activities of each production base and POSCO ASSAN TST are introduced, as well as an exhibition of an automobile steel plate sample featuring the technology and product of POSCO TNPC.

In the ‘Culture Zone,’ videos of various forms of steel in our everyday lives are played on 4 touch screens, and the beautiful sound made by steel instruments show the happiness of mankind through steel.

Various promotional activities are also displayed outside of the POSCO booth, and the building’s exterior introduces the many businesses that the POSCO Family is globally involved in through a graphic panel, and the large ride facilities that connect to the exterior of the booth and the rooftop terrace with artificial grass on the second floor provide a resting area for attendees.

Once the POSCO booth closes, POSCO plans to move the exhibition articles to POSCO ASSAN TST and POSCO TNPC to build a PR center at each subsidiary.