Iron is the Future – Part One: Everything you want to know about iron! 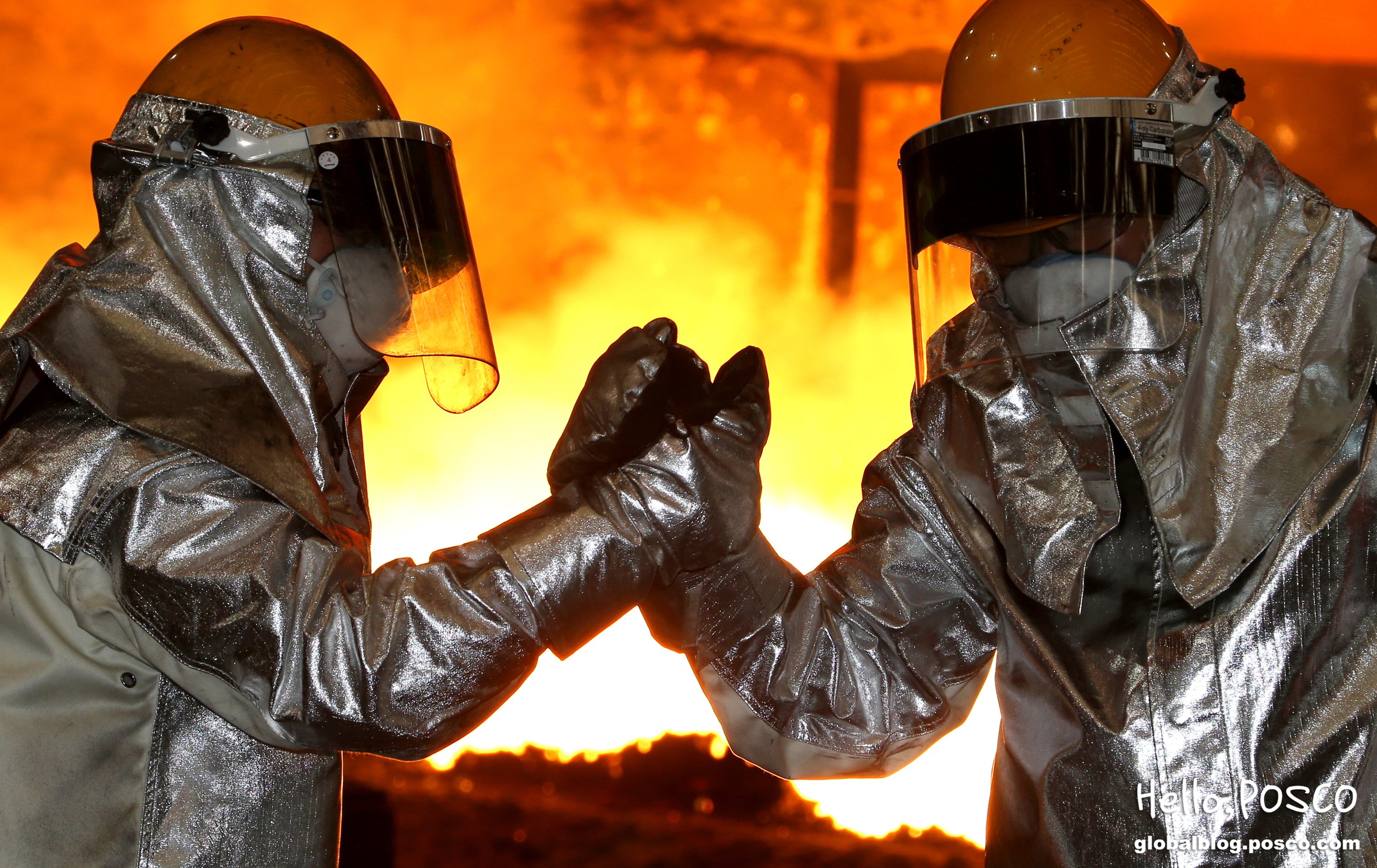 [Iron is the Future] blog post series will explore the history of the iron and speculate on how it will unfold in the future.

Iron has had a significant impact on the advance of human civilization. Do you know how iron, which is now taken for granted and used widely, entered our lives in the first place?

Today, to kick off the first edition of [Iron is the Future] series, we have prepared the behind story of the emergence of iron on Earth, as well as, various origin theories of iron.

How is Iron, number 26 on the periodic table and the fundamental element of life forms, made? 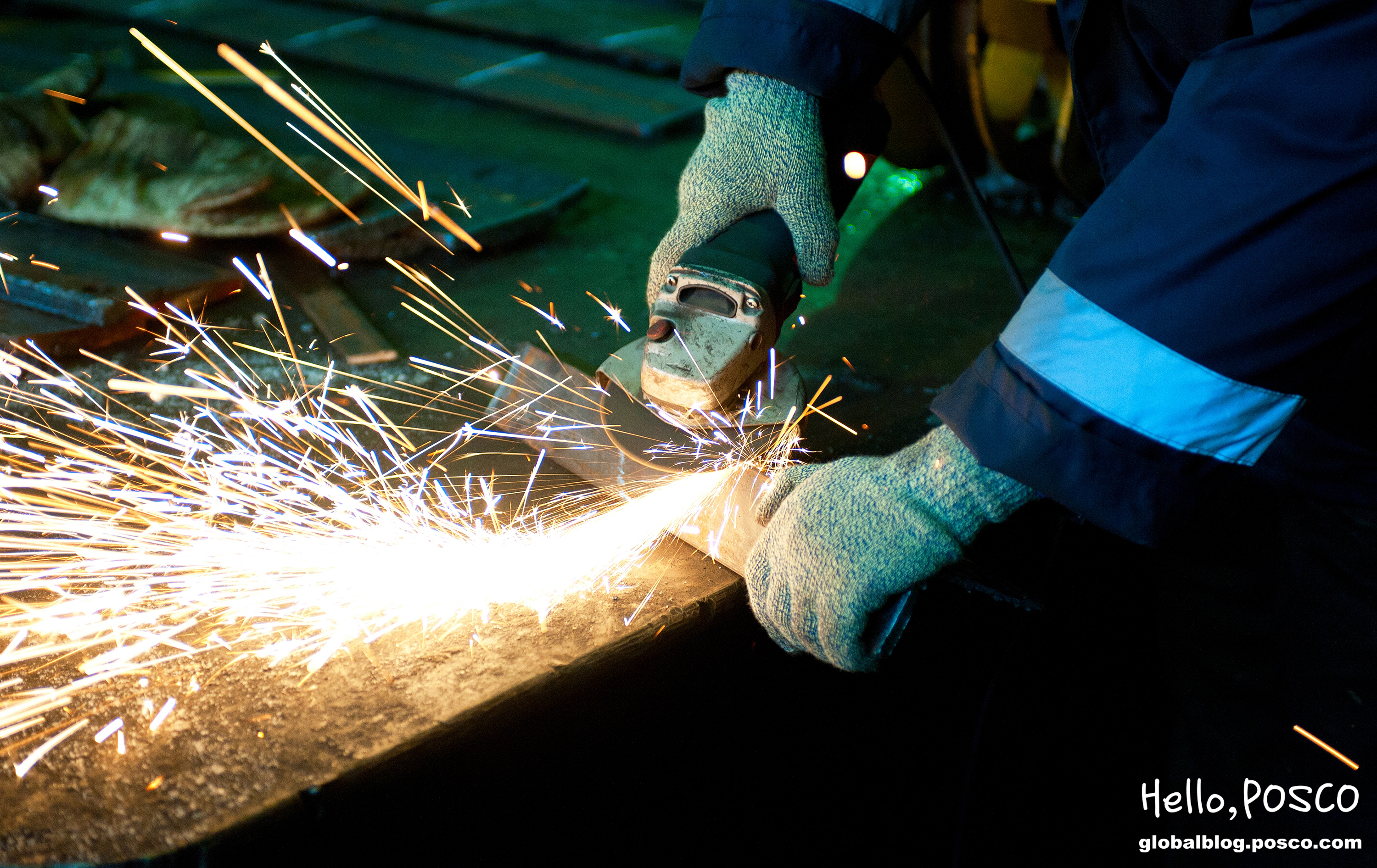 Atomic number 26 Fe, a.k.a. iron, makes up 35% of Earth’s mass and 5.2% of Earth’s crust. The abundant metal is truly one of Earth’s essential building blocks.  As mentioned in our previous post, there are 3 grams of iron even in the human body. Let’s take a look at how it’s made.

Long, long time ago, in a galaxy far away, iron was born during a nuclear fusion reaction within a star. During the initial stages following the Big Bang, no elements that were heavier than hydrogen or helium existed. In other words, iron didn’t even exist in the very beginning. 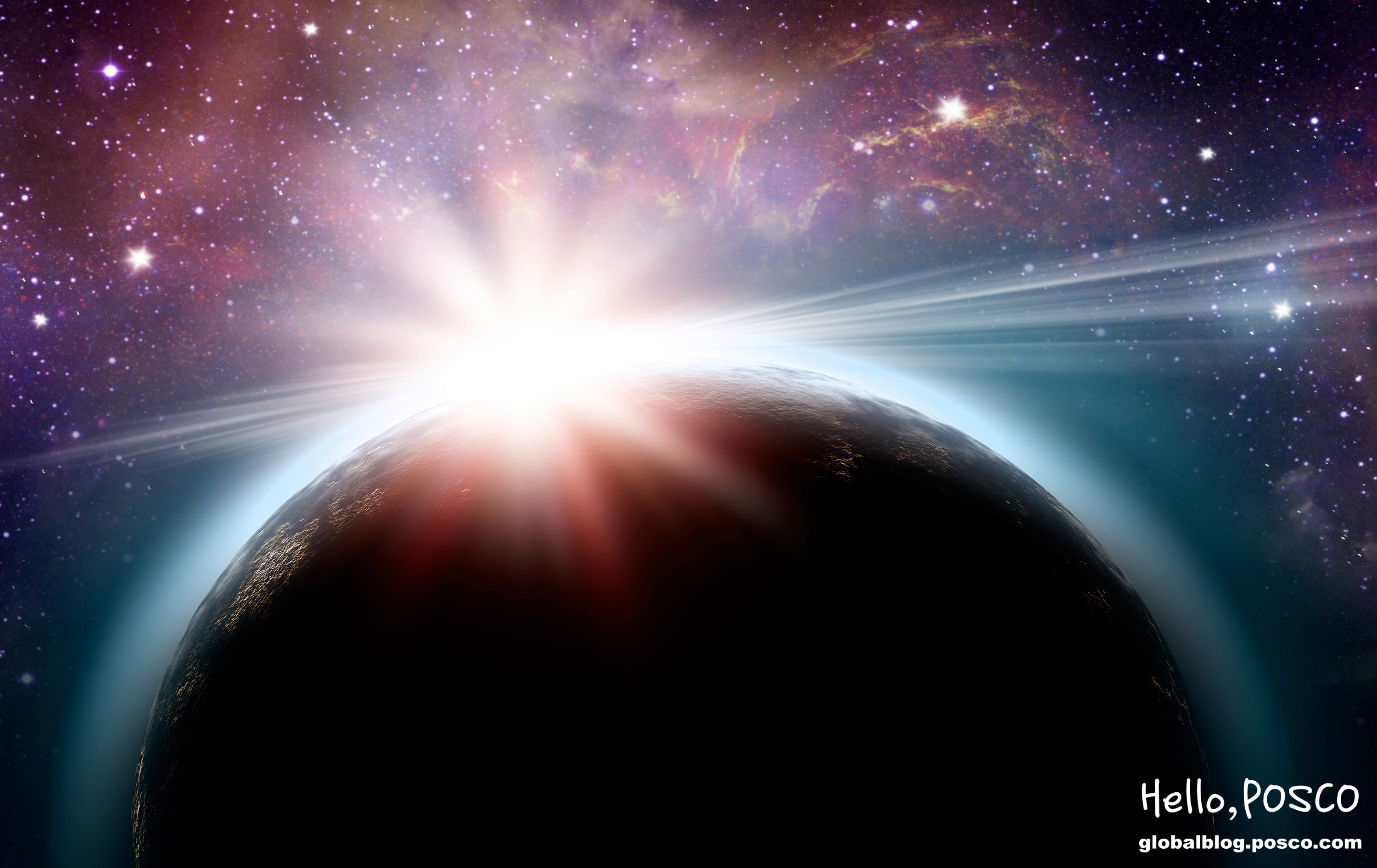 However, lighter elements require extreme heat to become iron through nuclear fusion, and to obtain such heat, extreme pressure is necessary. The only place that fulfills such requirements is within a giant star. Thus,  iron is  born when a giant star explodes into a supernova. This is why stars are nicknamed “Iron Factories in Space”.

How much iron is there in Earth?

Like we said, all elements have the tendency to turn into iron, the most stable element in the universe. Let’s see how much iron, one of the most widely used metals, makes up the Earth. 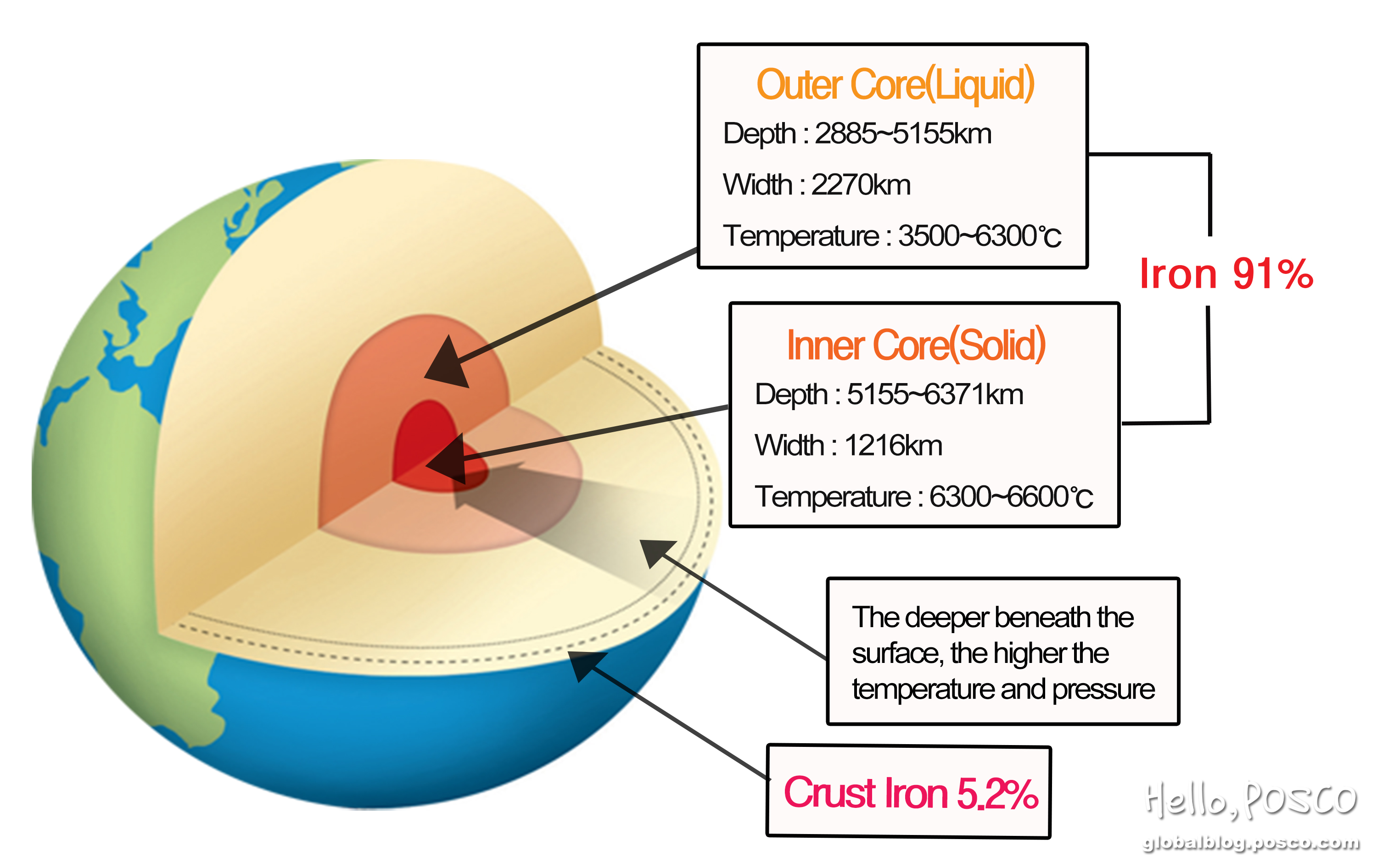 Iron accounts for a third of Earth’s mass. Most of it exists not in the crust, but within the core. It exists as a liquid in the outer core and as a solid in the inner core. In fact, 91% of the Earth’s core is made up of iron! 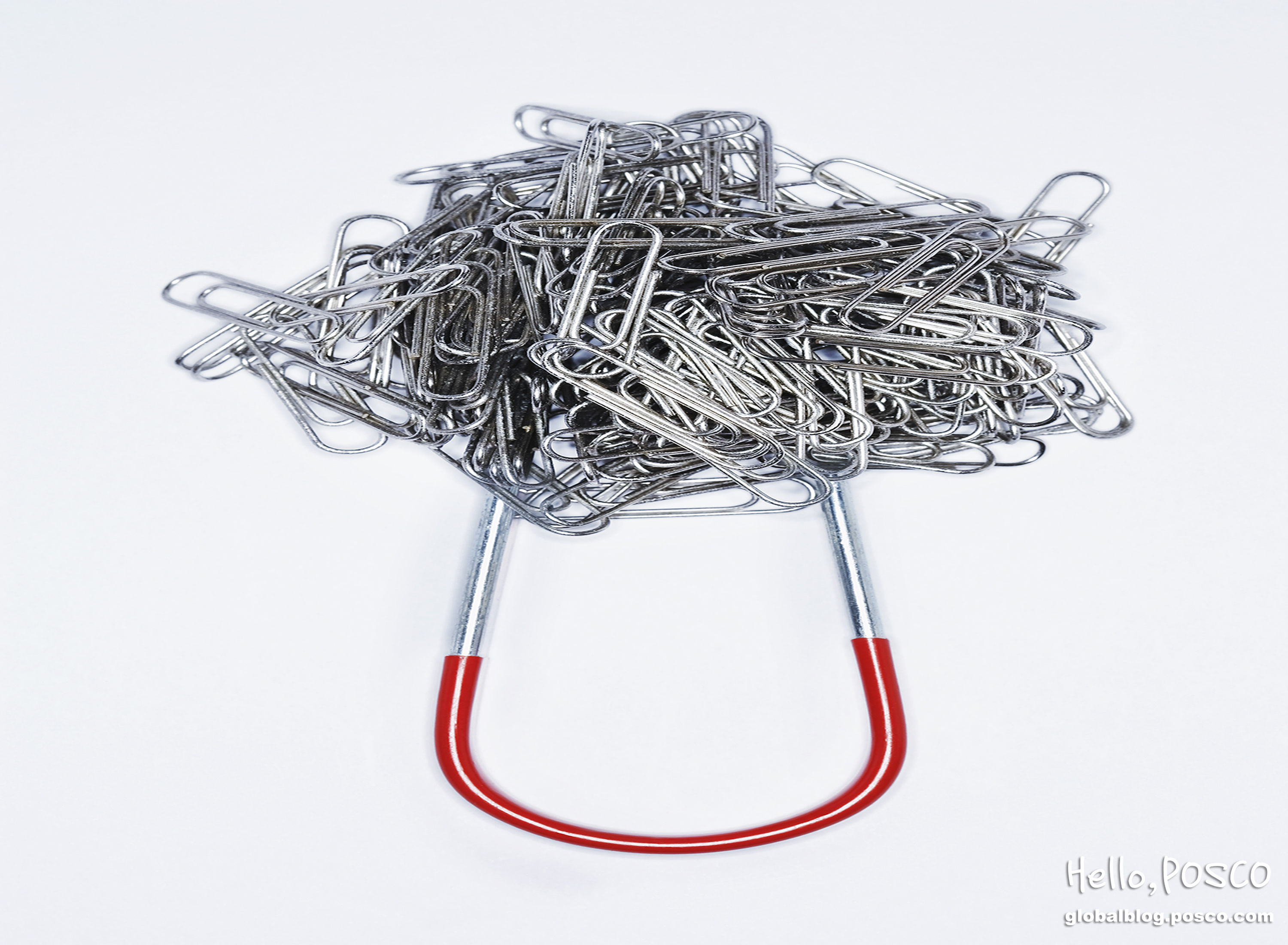 Furthermore, the iron in Earth’s core makes our planet habitable by forming Earth’s magnetic field which protects us from solar wind.

Then why is it so important to not be directly exposed to solar wind?

The upper atmospheric layer of the Sun emits plasma, which is what we call solar wind. Plasma, in turn, is essentially for the flow of electrons and protons which is known as radiation. Space radiation, if exposed, could 1) alter our DNA which will lead to cancer; 2) take away the electrons from the atoms that form our bodies; or 3) be absorbed by the atoms. All three scenarios will inevitably make life unsustainable.  If there were no iron in Earth’s core, there would be no magnetic field to shield us and we wouldn’t be able to exist on Earth in the first place.

Are you curious about the various origin theories of iron? There are three theories about the birth of iron, let’s find out now! 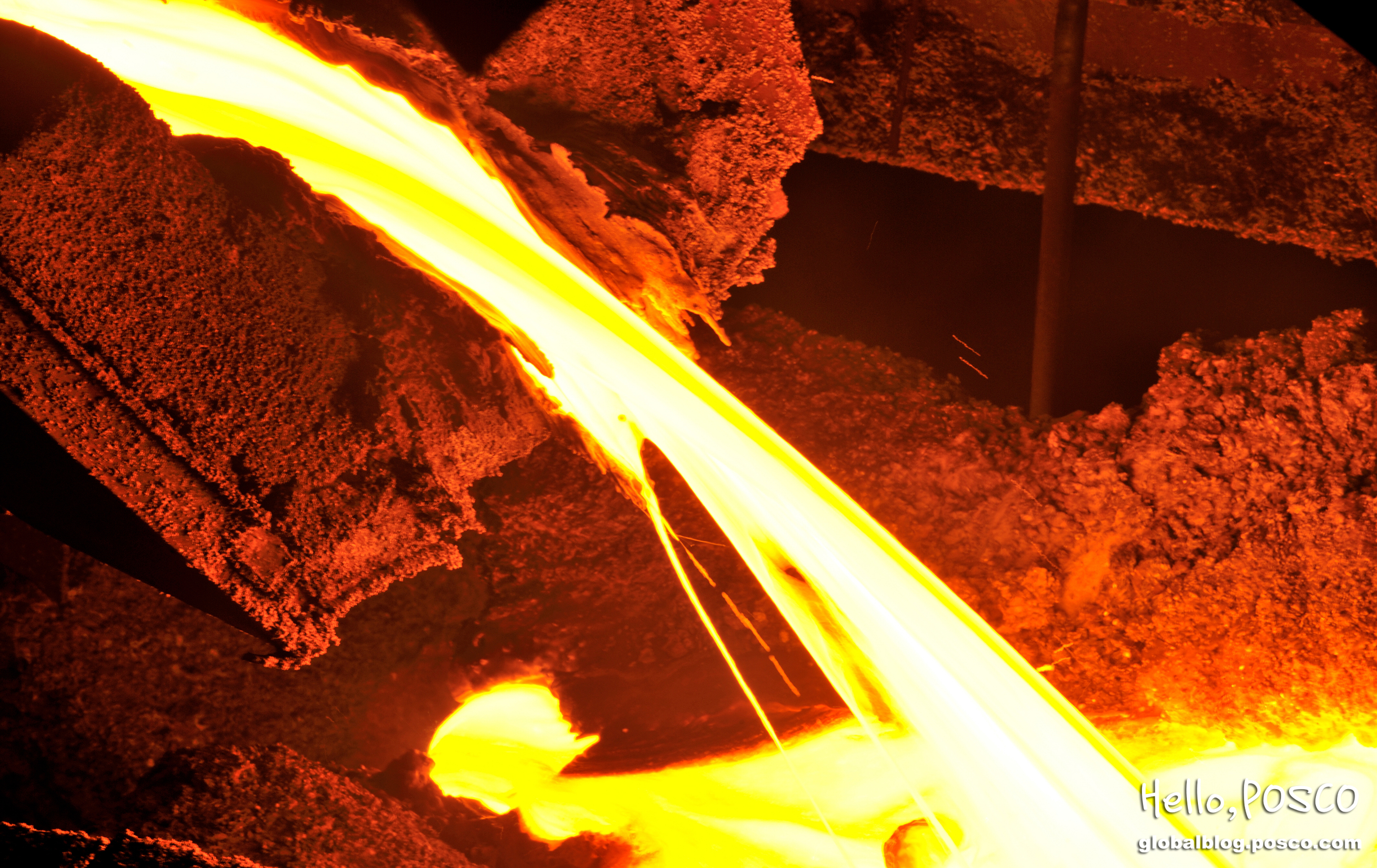 The first theory is that the discovery of iron was, interestingly, a mistake. This theory posits that our ancestors mistook iron for chalcopyrite, an ingredient of bronze, which happened to be of similar shade and color. This theory becomes plausible when we assume that our ancestors already had the technology to manufacture bronze during the Bronze Age.

Next is the wildfire theory. This theory argues that a wildfire melted the iron ore that emerged on the earth’s surface, thus allowing our ancestors to discover iron. According to this theory, prehistoric humans took the now deoxidized and exposed iron ore and molded it into different shapes for use.

In general, the fire we use daily seldom goes over 800℃, which is insufficient heat to deoxidize iron ore. However, a wildfire in thick, prehistoric jungles could have been much larger and may have lasted for much longer, which makes the wildfire theory possible.

Last but not least is the meteorite theory. This theory posits that humankind discovered iron from fallen meteorites. In fact, many of the meteorites which landed on Earth contain abundant iron, which is called meteorite iron. Meteorites, which are an alloy of iron and nickel, are reported to contain 4~20% nickel and 0.3%~1.6% cobalt.

The most plausible of the aforementioned theories is the first one, which states that our ancestors mistook iron for bronze. According to ancient documents and ruins, humankind first began to use iron around BC 4,000 in the Asia Minor region. Also, evidence claims that iron refining technology existed around 3,000 B.C. in Mesopotamia and Egypt.

From cars to ships, planes, homes, various daily necessities, iron is indeed all around us. We hope this post provided some enlightenment around Iron. Look forward to our part 2 in the [Iron is the Future] series.