POSCO Newsroom presents the story of premium construction material, INNOVILT, and today we will start with SP-CIP Pile(Smart(Steel) Pipe-Cast In Placed Pile)! Let’s take a peek at the note of POSCO’s researchers who developed the Steel pipe Pile together with clients — MS Pipe and Hankook Material.

I am Dong-Wook Ahn, a senior researcher at POSCO Steel Structure Research Group. The field that I am interested in these days is ‘rebar’. You might wonder what rebar has got to do with POSCO since POSCO doesn’t manufacture rebar. Of course, I’m not talking about developing rebar. My goal is to develop a steel pipe that can replace rebar and make a premium construction material.

Rebar is the most commonly used material on construction sites. However, it has a major drawback: it is too heavy. Also, connecting the rebars by welding is impossible, so they should be tied together with wire, one by one making the rebar processing work highly dependent on manpower. Hence, the heavyweight of rebar causes great inconvenience to the workers at the site, and it is one of the main reasons why many construction workers suffer from musculoskeletal diseases.

All creation starts with a critical mind. The question of “Should it always have to be such heavy rebars?” led to the next question, “How about making a lighter yet stronger alternative to rebar?” How was this possible? With our very best steel technology! I soon started developing a lightweight steel pipe to replace rebar. With this lightweight steel pipe, my final goal was developing the construction material, ‘Steel Pipe-Cast In Placed Pile’.

A net pile made of rebar is commonly used for ground stabilization. It prevents cracks and degradation of the building. What if the rebar was replaced with steel pipes? It will become lighter and stronger, therefore, resolving the many problems mentioned earlier. 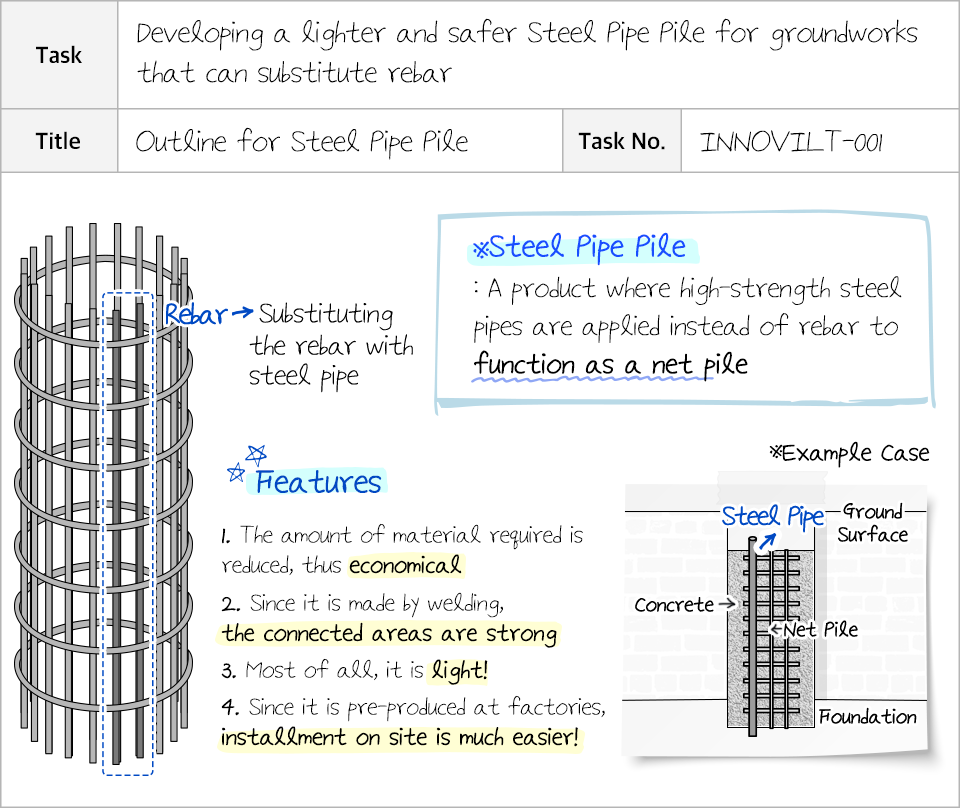 l Developing a High-Strength Steel Pipe with a Yield Strength of 800MPa!

The yield strength (YS) of rebars in the market is 400 MPa. This means that if a force of 400 MPa or more is applied to the rebar, it will deform and will not be restored. My task was to come up with a steel pipe that was at least equal or stronger compared to rebars. Considering that steel pipes are hollow in the middle, I decided to create steel pipes with a yield strength of 800MPa.

My team began research on POSCO’s high-strength steel, PosH690 (POSCO High strength 690). We made a steel pipe with this PosH690 at ‘MS Pipe’, our client company, to analyze yield strength caused by work hardening. Finally, we succeeded in deriving optimal production conditions.

With the steel pipe from MS Pipe, ‘Hankook Material’ produced the Steel Pile. (Hankook is another client company of POSCO.) The main rebar was replaced with a steel pipe, while the spiral rebar was used as it was, along with the wires used for tightening. Everything remained the same except for the main material. Test specimens — one where conventional rebar net pile was placed inside the concrete and the other Steel pipe pile inside the concrete — were made, and experiments were conducted to compare performances over and over again. The result turned out to be a huge success. The newly developed Steel pipe Pile showed similar performance to the rebar net pile. Finally, a Steel pipe Pile product using a steel pipe was all set!

▲ Testing of the flexural strength of piles 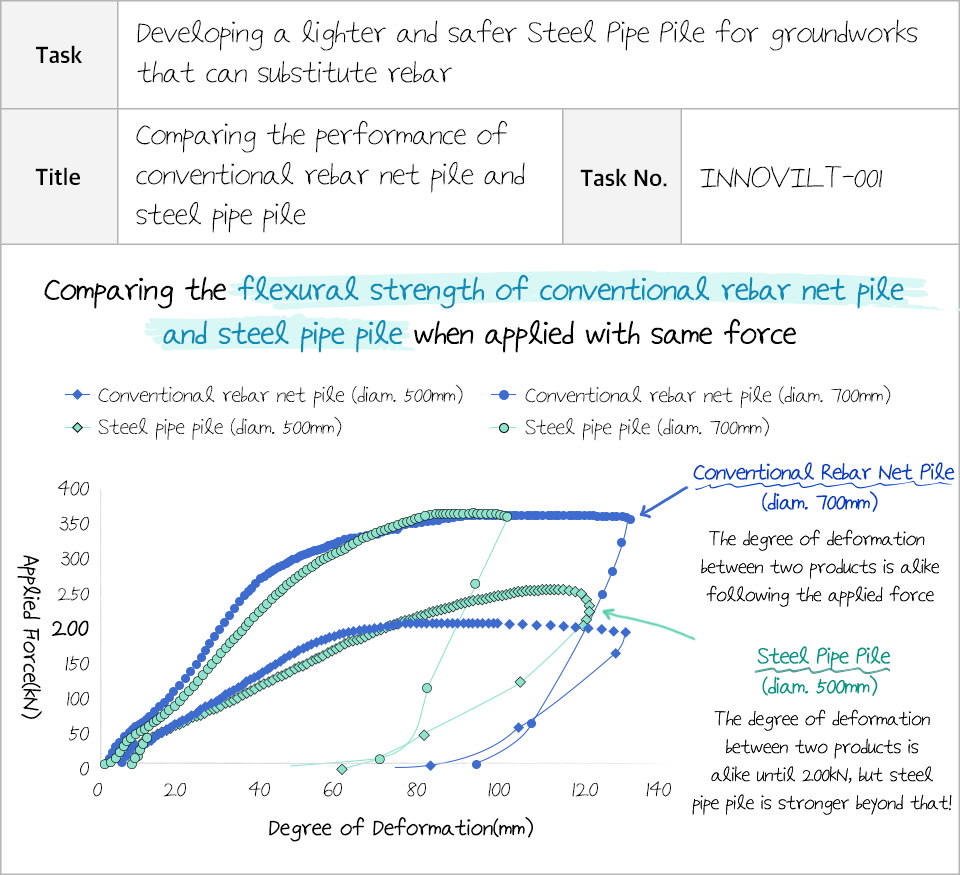 Hankook Material named the product Smart(Steel) Pipe-Cast In Placed Pile. The manufacturing process is a collaboration, and it is as follows: POSCO supplies PosH690 and MS Pipe produces steel pipes with it, and Hankook Material manufactures SP-CIP piles with the pipes.

Construction materials, especially those for ground construction, must be applied to the actual construction site and made sure that it is indeed as strong as the extracted research value. This means that research on construction materials does not end in the lab. Employees of MS Pipe, Hankook Material, and I carefully watched the construction process on site. It was also necessary to verify whether the product guarantees the desired performance after the construction was completed. After waiting for the concrete to harden for about a month, a dynamic load testing was conducted by striking a 10-ton hammer on the structure to measure the support force. A horizontal load testing was also carried out by pushing the structures away from each other to check seismic performance. Fortunately, both tests turned out to be satisfactory. The SP-CIP Pile went under two more on-site tests eventually proving that the product was indeed lighter, economical, and yet stable in strength compared to the use of conventional rebar pile.

The weight of the product was dramatically reduced as intended, but there was one more task to be resolved — welding. As mentioned earlier, rebars cannot be welded because they do not secure chemical components. The steel pipe pile that we developed was woven with wire as well instead of welding. So we decided to go a step further and upgrade the product into a fully welded one. “Let’s make a steel pipe pile that can be welded with 100% POSCO steel!”

We also acquired an official use certification from the Korean Construction Joints Association based on this test result. What started with the development of steel pipes to replace rebars eventually ended with producing Steel pipe Piles using 100% POSCO steel. It was an achievement that had taken four years.

▲ The automated welding facility of SP-CIP Pile at Hankook Material

l The Birth of SIP Pile: 3 Features in 1

In January, following joint marketing by POSCO and the client company, the product was finally applied to a construction site in Seoul for the first time. In the following six months, four additional sites adopted the product as well, and it succeeded in settling into the construction market. The response to the SP-CIP Pile is quite phenomenal, considering the conservative nature of the construction market. Here are some of the features that those who have used the SP-CIP Pile mention.

First of all, it is economical. Since the yield strength of the steel pipe is twice as high as conventional rebar, the sectional area required is reduced by half. Despite the unit price per ton being more expensive than that of rebar, the weight per meter is reduced by half, hence, the unit price per meter is also more economical than that of rebar.

Second, it is of stable quality. In the case of conventional rebar net piles, binding wires are used to bond the materials since welding is impossible. However, in the case of our products, they can be safely welded and supplied. Let’s skip the obvious explanation of which product is more stable.

Another feature is lightweight. It significantly reduces the labor intensity of workers on site. In fact, there was even a case that workers, who worked with steel pipes at the previous site, suggested changing the rebar to steel pipes at the new construction site.

One more thing. It is supplied through pre-production. SP-CIP Pile can be manufactured on site as well, but it is mostly pre-produced at factories and sent to the construction site.

In-Jeong Woo who was in charge of a construction site where SP-CIP Pile was applied said, “Since SP-CIP Pile is pre-produced in factories with excellent quality and only needs to be placed on site, it is especially convenient to handle in small-sized construction sites of downtown areas. The product is brought to the site in a complete form, so there isn’t any problem of handling the remaining rebars.” He also added, “Wire-connected rebar net pile is distorted when moved or placed for construction, but since Steel pipe Pile is produced by welding, the construction process becomes much safer.”

Hankook Material’s SP-CIP Pile was selected as an INNOVILT certified product in 1Q this year, and since then, it has been more actively applied at sites. Researchers at POSCO, including myself, are still working on technologies to expand the market. Our work will continue until the day comes where the steel technology required by clients is successfully realized into innovative products.