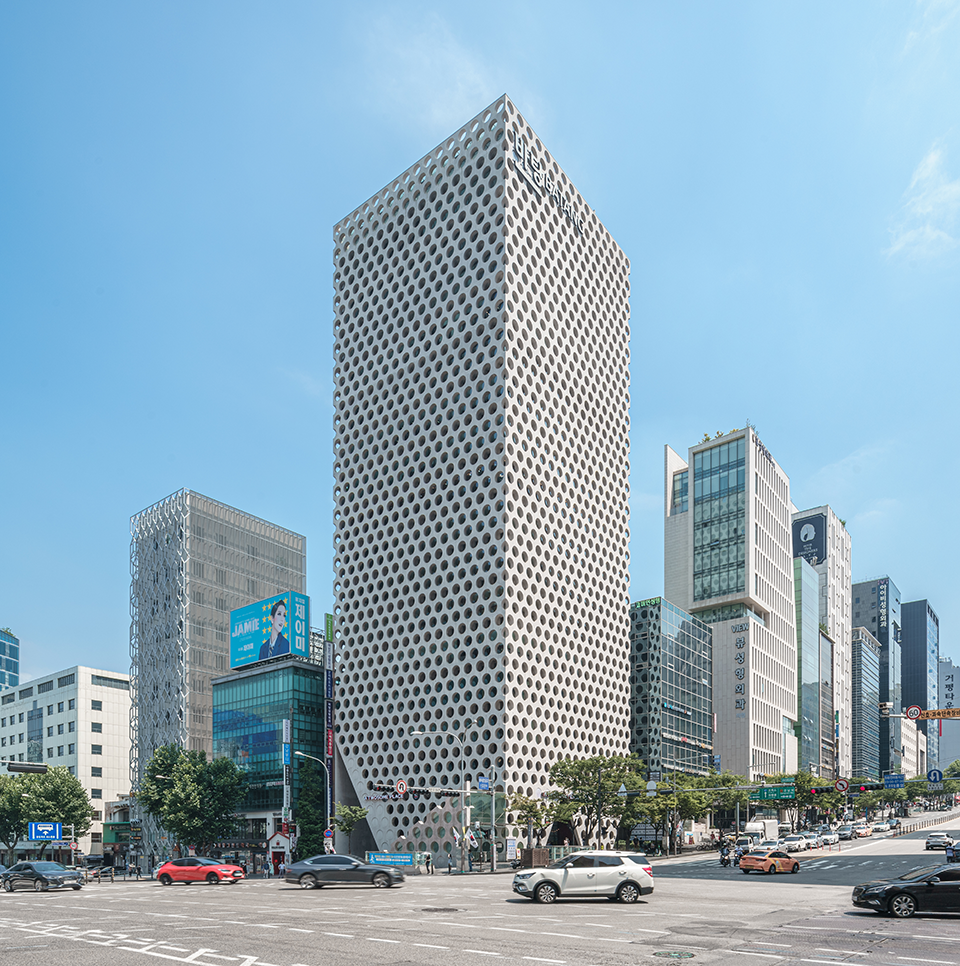 Urban Hive, known for its unique appearance which features many round holes, is an office building constructed 13 years ago. Designed in 2004 and completed in September 2008, it is a 17-story building with a site area of about 1000m2 and a building area of 585m2.

Seoul, the capital of South Korea, is a fast-changing city. Everything changes quickly including popular places to go where people tend to gather. The location of the Urban Hive is also quite notable. Before Sinnonhyeon Station (Line 9) was built, the adjacent area around the Urban Hive wasn’t all that impressive. At the time of the building’s completion in 2008, Gangnam Station — the nearest subway station then — had just exits 6 and 7 (currently expanded to exits 10 and 11), which meant that the building was located quite away from the downtown area. The block where Urban Hive stands served as a small place for people to enjoy the nights of the city at restaurants and bars hidden amongst low-rise residential buildings. 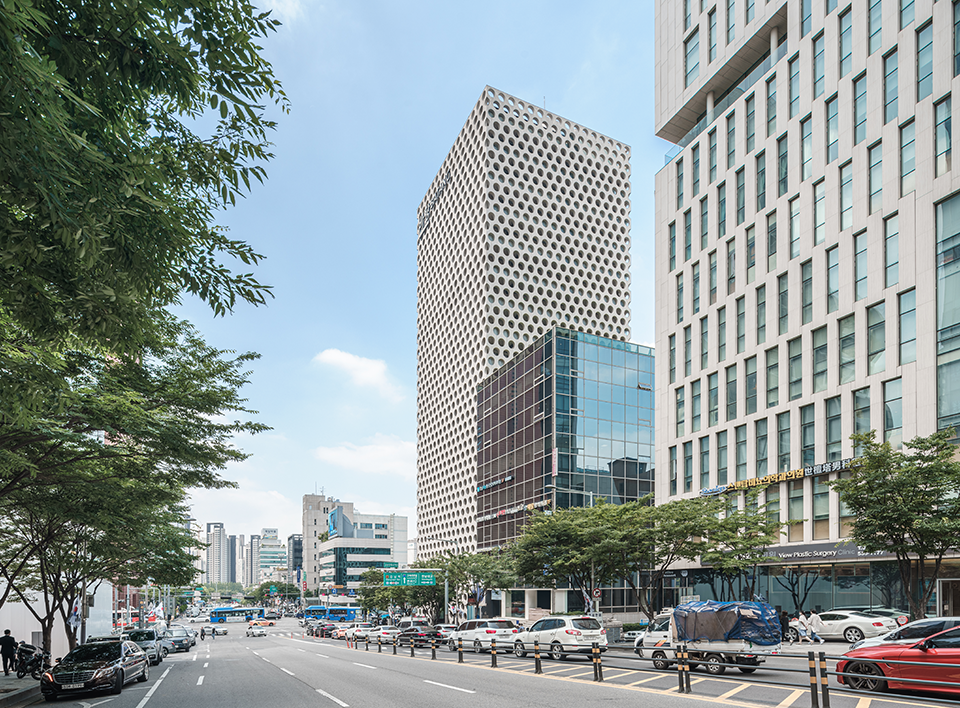 Architect In-Chul Kim said that the design of the building started from the bustling vibes of Gangnam. He explained that his perspective was to calm down and relax the hustle and bustle of the city. Kim adopted a simple cube form in the building structure, which was a “movement to capture the atmosphere of the city”. However, the intended simplicity did not end with just the box-shaped design. It came to light through a unique concept and structure that reversed the inside and outside.

A Straightforward Structure on the Outside

The outer concrete wall, which has about 3,300 circular holes with a diameter of 1m, is a kind of bearing wall that supports the structure of the building. This is quite different from the conventional high-rise buildings where reinforced concrete columns are covered by layers of glasses and metals outside. Architect Yoon-Gyoo Jang exclaimed, “Since middle and high-rise buildings in cities mostly adopt the conventional method of applying curtain walls, the case of Urban Hive is quite exceptional. It has become an example which proves that the exterior of a building can be structured and it can be an element constituting the entire elevation.” Put simply, it means that the concrete walls of the Urban Hive weren’t built to cover up or block something. It is purely an indispensable core put in place to support the entire structure.

Constructing a building of this size and height with concrete entirely is a rare case — even globally. This is due to the recent trend in modern architecture which is to capture a sense of lightness and openness in shape and materials. Other than that, there is a structural issue as well. The higher a building is, the heavier the reinforced concrete becomes, making it difficult to support the overall weight. Additionally, it is difficult to smoothly treat large surfaces of exposed concrete without other decorations because it causes a concern of rough or poor finish. 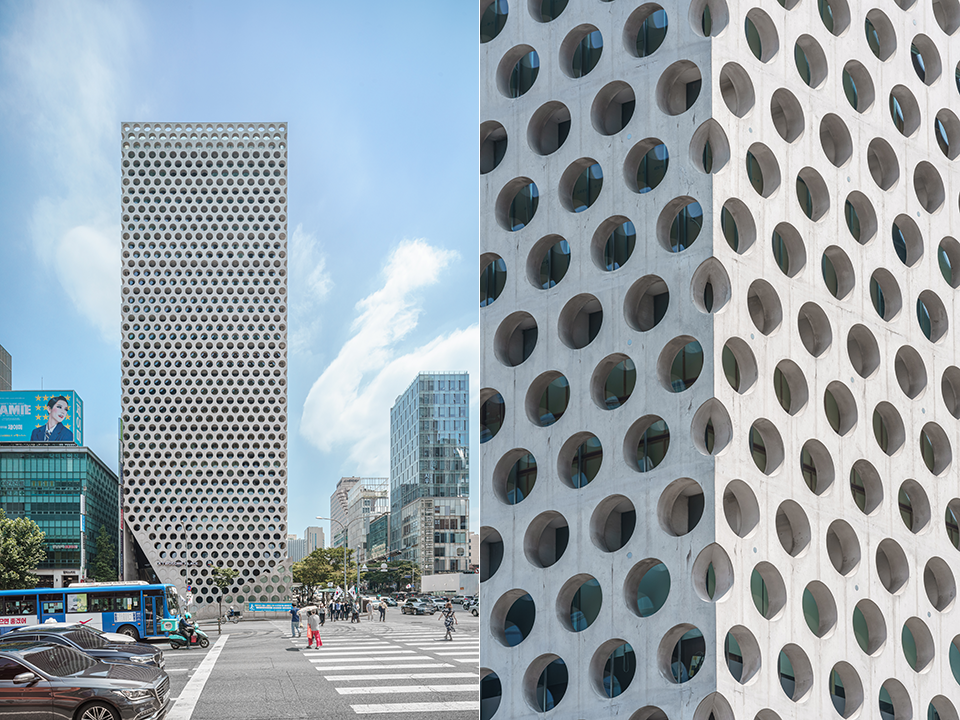 Chang-Nam Lee, CEO of SEN Engineering Group, who participated in the structural design, explained that there were multiple discussions at the beginning, such as whether to use factory produced precast concrete or on-site concrete, and whether to use permanent molds to shape the holes on the wall or whether to form them into different shapes like a diamond shape. Reducing the possibility of cracks, which is a weakness of concrete, was another important factor to consider. Lee said, “The architect wanted the wall to be exactly 40cm thick. If it became thinner than that, the depth of the holes on it would be reduced, giving it a poor look. The architect was also against making the wall thicker or using a separate finishing material.”

Would a 40cm-thick exposed concrete be able to act as a bearing wall to stand the load of a 17-story building? The width of the interior space is 17.35 meters. This means that there is space to add a column in the middle. However, neither the architect nor the structural design team chose the easy way. They stuck to the initial design. They chose TSC Composite Beam as material for the wall so as to build a bearing wall without any columns which would secure the usability and openness inside as well.

TSC composite beam is composed of steel outside and concrete inside, which is slightly different from the conventional method where reinforced concrete surrounds the steel inside. It is constructed by filling concrete inside the mold made of steel plates. Adding rebars inside is possible, but this isn’t the case at most sites, including the Urban Hive. The composite beam consists of a web made of cold-formed steel plate, upper and lower plates, and inner concrete.

The typical reinforced concrete consists of molds, rebars, and concrete. Among them, the molds are temporary materials needed just during the construction. However, they take up a large portion of the expense and make the construction period longer as well. The number of technicians who assemble the molds is also decreasing, therefore, increasing labor cost. How could this problem be solved then?

TSC composite beam combines steel plates and concrete, becoming a new concept of material, free from molds and rebar. Compared to reinforced concrete beams, it has a smaller volume, yet less bending and deflection. The lower steel plate supports the structure in the tensile direction, preventing cracks. The amount of steel frame is minimized while long-span construction becomes possible. The construction period is similar to or shorter than that of steel-framed buildings and costs less. Another feature making the material suitable for urban structures, such as the Urban Hive, is that it is lightweight. Smaller tower crane capacity is an additional bonus.

Modern architects contemplate for interior space without columns. If you are wondering what makes the TSC composite beam, built to reduce the columns in the interior space, so different, think of it this way. Suppose that there is a building that has an outer wall with holes like cheesecake and the same floor composition. What if this building has a column at the center of its inner space? All architectural concepts would be in vain. When a column is needed for the structure, the outer wall becomes a decoration once again. It no longer embodies the idea of the architect — a small but complete difference.

Urban Hive has been a hot topic for its exterior, but it is the interior that actually brings the architecture to life. Using TSC composite beams, the span is able to reach 17.35m long without a column, and the height of the beam stands at 60cm. All of this was accomplished with a cost reduction of 30% compared to the conventional steel composite beams. Between the outer wall of the Urban Hive and the glass wall of the offices is a space for outdoor air. The round holes on the wall are also hollowed out except for areas under the waist where acrylic plates are placed. The architect wanted to provide each floor with long corridors as spaces where outdoor air could flow. The building doesn’t have a separate lobby but there is a cafe on the first and second floor where people can access the building more easily and comfortably. At the cafe, you can see the TSC composite beam on the ceiling, because it is deliberately exposed without additional finishing materials.