[INNOVILT Fantasia] #1 The New Library of SNU, Kwanjeong Is Shining with Steel 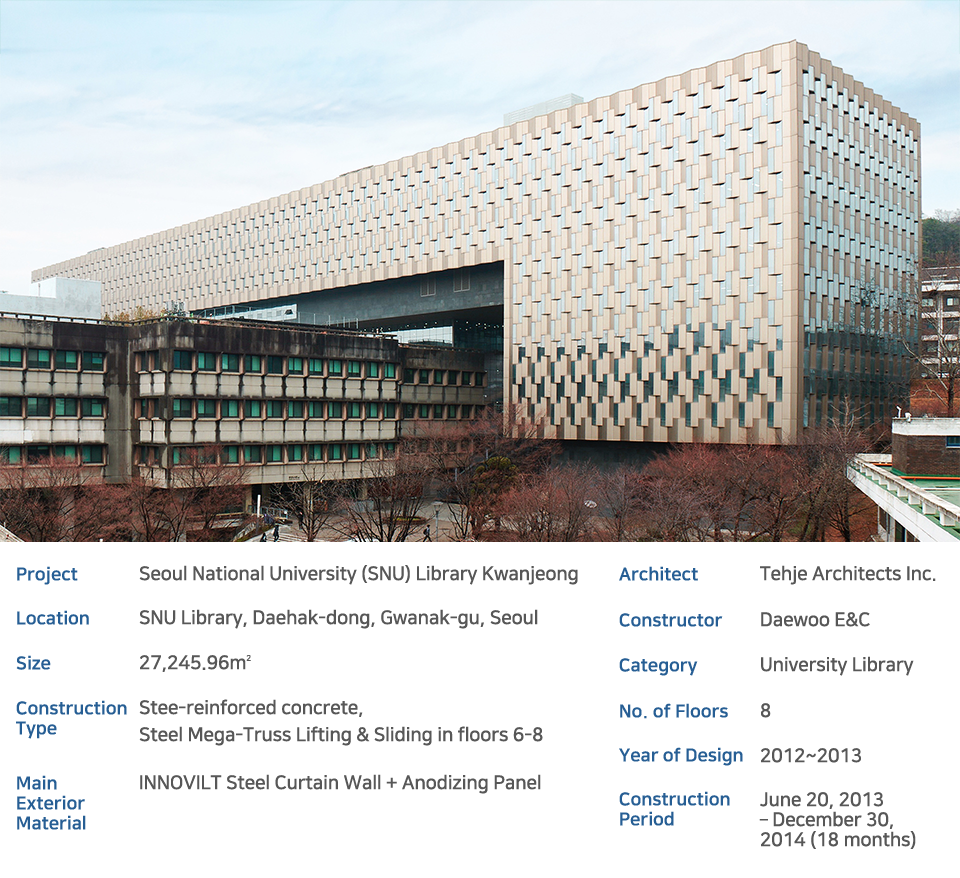 The main building of the Central Library, located in the heart of Seoul National University (SNU) Gwanak campus, was completed in 1975 with the design from Seung-woo Lee. Built to reflect modernism, which was at its height at the time, the building has been well used for over 40 years without much change. It is not necessary to give many titles such as “The best” or “Having the largest number of books” to SNU’s library since it is a significant place with history, where countless students have passed. However, as times changed, more was expected from the library, and the need for expansion became apparent. Bookshelves were lacking space, and the reading rooms were also becoming too small to provide for all the flooding students. So, in 2013, SNU decided to construct “Kwanjeong Building” as an extension building of the central library. 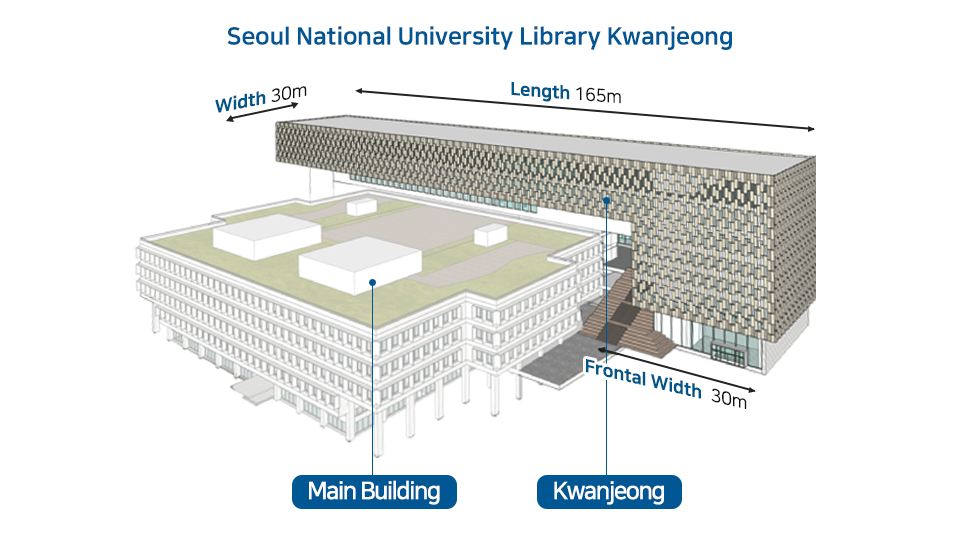 SNU Library Kwanjeong faced some challenges in its construction — like in all other buildings — since it had to meet the following conditions: 1. The Kwanjeong Building had to be directly connected to the main building, and 2. the central stairway between the library and the student center, and the pathway to the east of the library had to be preserved in its original state. To achieve this task, SNU had no choice but to select the narrow piece of land between the Central Library and the College of Pharmacy as the construction site for the expansion. Instead of initiating the original plan, which was to build the library higher, an L-shaped design plan was selected, covering the right-hand side and upper part of the Central Library. This was a measure to secure the scenic view that stands behind the library as well as to keep with the height restrictions of Gwanaksan Mountain. The construction method adopted here leaves a gap between the main building’s rooftop and the Kwanjeong Building, giving it an illusion — as if a new floor was added to the main building.

The Kwanjeong Building took a horizontally long-form, reaching 165 meters to secure maximum interior space. The floor plan of the sixth, seventh and eighth floors, shows that there aren’t any columns or walls passing through the middle, other than the pillar located near the elevator. The sixth floor consists of a multimedia plaza and a computer lab, and reading rooms are located on the seventh and eighth floor, so these three floors are where many students are likely to use at all times. Since there aren’t any columns here, the students can feel much comfortable and a sense of openness as well.

A truss — weaving linear frameworks into triangular nets to withstand heavy weight — structure reaching 112.5 meters wide is supported by the two core mega columns standing at both ends of the building. In reality, using a long span truss structure in a large scale building is quite rare. The key to realizing this structure is POSCO’s high performance construction steel called HSA 650(High-performance Steel for Architecture 650). With a yield strength of 650 MPa and tensile strength of 800 MPa, HSA650 is capable of supporting a weight of 80 kg per 1㎟. Simply put, the SNU Library Kwanjeong is an architecture where excellent materials meet construction techniques. 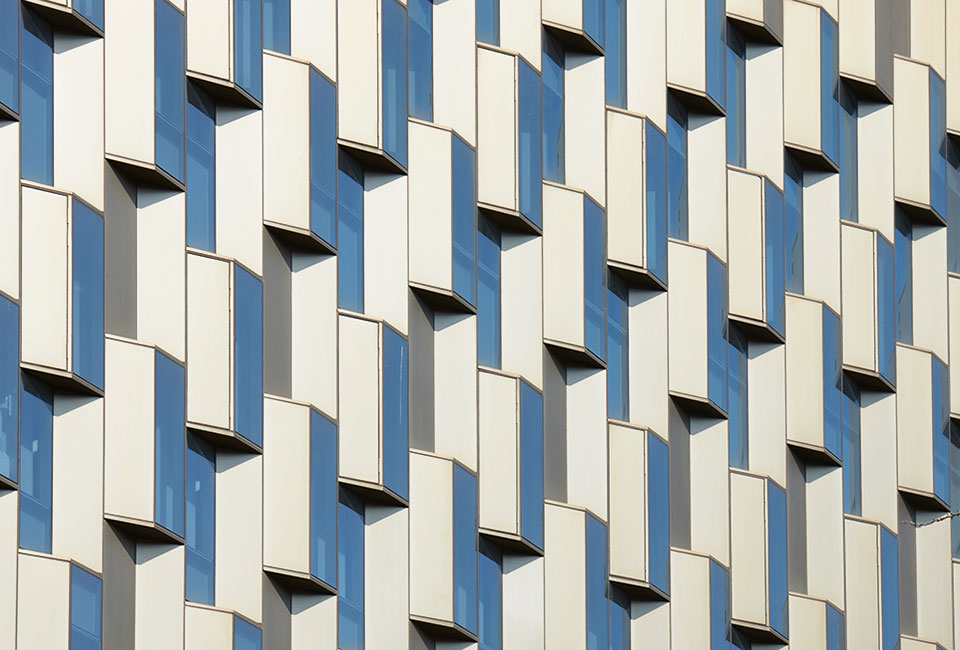 ▲ The outer wall of Kwanjeong was made with a trapezoidal module curtain wall. For the purpose, the Steel Curtain Wall was selected, since it enables atypical designs and shows higher structural performance compared to other materials.

A Facade Filled with the Lights of the Mountains and Sky

Besides its structural merits, Kwanjeong Building catches the eye with its shining exterior. Tae-Yong Yoo, the architect in charge of the project, mentioned that the concept of the design was about “light” — something that has been and will be existing in the future as well. He said, “I started designing by setting a small architectural element that projects light. And this element was repeated to make up a whole.” His intentions are well displayed on the building facade, the exterior of the building. The exterior wall was built by applying the steel curtain wall and anodizing panels — a plated panel with a film that is produced while oxidizing aluminum surface — in a repetitive manner. These panels were tilted to 16 degrees considering that they highly reflect the strong summer sun. So this exterior wall is capable of reflecting and letting in sunlight at the same time.

Curtain walls aren’t new to modern architecture. However, due to structural issues, they need to be used carefully in the case of high buildings like Kwanjeong (4.5 meters). Especially if the exterior wall is to show an atypical design, a curtain wall made of steel would be most appropriate choice. In the case of Kwanjeong, the frames of the curtain wall that hold the glass and anodizing panels are slim and neat-looking. This is possible because they are INNOVILT Steel Curtain Wall made with POSCO’s World Top Premium Product, ‘PosMAC’. PosMAC is a ternary alloy coated steel composed of zinc, magnesium, and aluminum. When exposed, the coating forms a highly stable and dense film layer called “Simonkolleite.” This enables the product to demonstrate an extra protective layer — a ternary alloy layer whose density is much higher than that of conventional galvanized steel sheet. PosMAC is 10 times more corrosion-resistant than conventional steel.

The facade was made to reflect the sunlight from early morning till sunset, and relieve the heaviness it might impose on the overall landscape. The spacious indoor area with cores on each side, and the harmony of glass and anodizing displayed on the exterior with a slim well-finished frame might be considered as key features of SNU Library Kwanjeong. And INNOVILT Steel Curtain Wall plays a hidden role behind the scenes here.