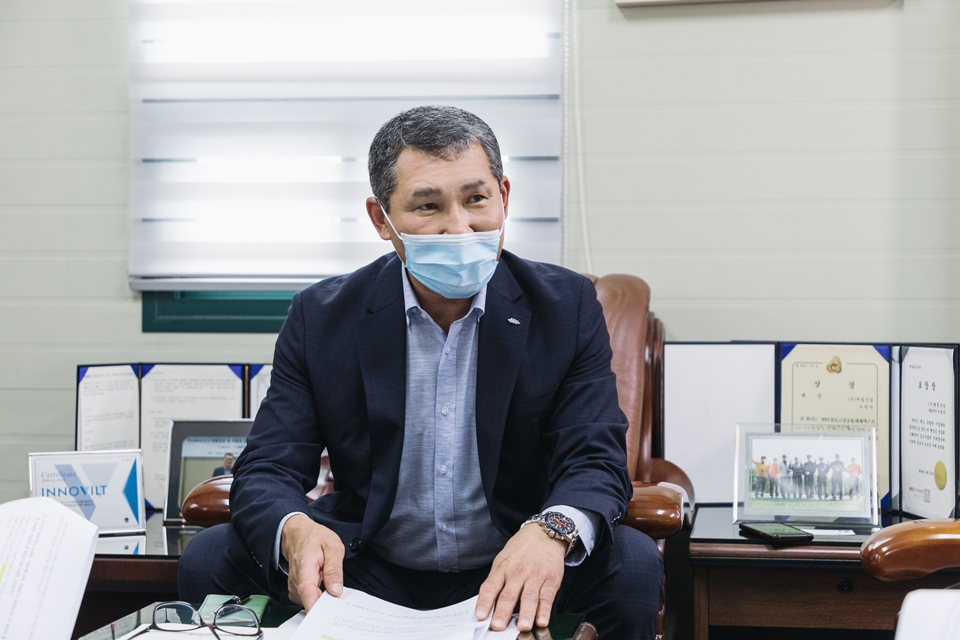 Founded in 1999, Jecheol Industrial Co., Ltd. is a manufacturer specialized in corrugated steel pipes. Since its establishment, it has been producing more advanced corrugated steel pipes through continuous R&D resulting in several related patents. Among them, “PosMAC Rainwater Storage Tank” would be the most focalized product of the manufacturer. PosMAC stands for POSCO Magnesium Aluminum Alloy Coating. It is a ternary alloy coated steel composed of zinc, magnesium, and aluminum, and it is 5 to 10 times more corrosion-resistant material than conventional galvanized steel. All products produced by Jecheol Industrial, including PosMAC rainwater storage tanks, use PosMAC steel as a raw material.

“Jecheol Industrial has never used any other material but POSCO steel products ever since its establishment. This shows how much we trust its quality. Before PosMAC, we used galvanized steel sheets produced by POSCO, and as PosMAC — an upgraded material — was developed, we changed all our raw material to PosMAC,” said Kwon-Duk Seo, CEO of Jecheol Industrial Co., Ltd. 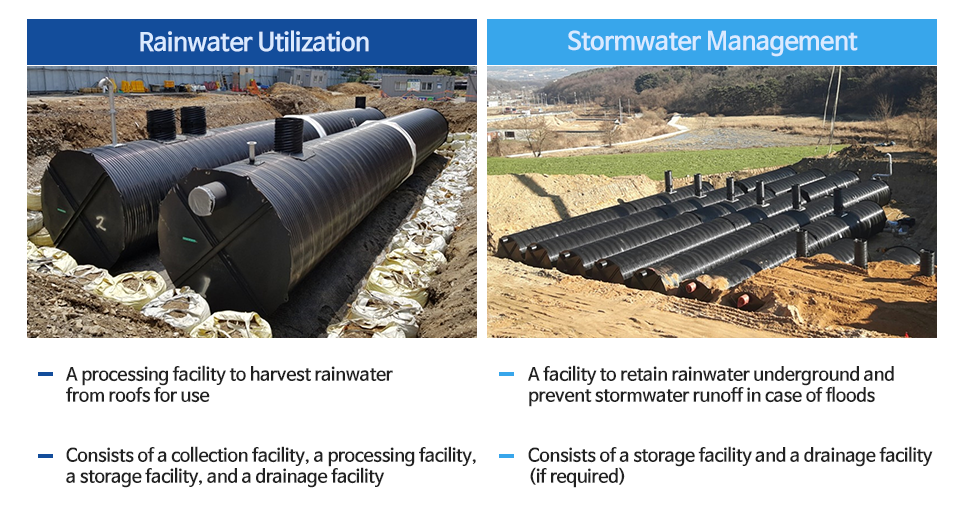 CEO Kwon-Duk Seo added, “The technology that we possess is something that has been accumulated over such a long period of time. It cannot be copied by any other company. Moreover, our company also holds more than ten patents related to rainwater storage tanks.”

The second advantage is that it is economical. Since PosMAC rainwater storage tanks have a short construction period, the overall construction cost is also about 30% lower than others. In addition, the PosMAC rainwater storage tank is easy to maintain and doesn’t require additional waterproofing work. Plastic tanks have a complicated internal structure, which makes maintenance difficult, and partial repair is also hard in case of damages. Concrete tanks require regular waterproofing work since water leaks frequently through the gaps in the connection.

PosMAC rainwater storage tanks help prevent drought and flooding that have become frequent recently due to climate change. In the event of a drought, the collected rainwater is utilized for bathroom, landscaping, and emergency use. In the case of heavy rain, the rainwater is stored temporarily and discharged later to prevent flood damage.

PosMAC rainwater storage tanks are assembled and installed on-site, then isn’t there any risk of water leakage? Welding seems like a safer option than the method of bolting when connecting the tanks. CEO Kwon-Duk Seo replied, “There is no risk of water leaking because the rubber used to seal the bolt and nut joints does not react to water. Related research and verification have shown that the bolt and nut joints using this material would last about 100 years.”

As the conversation continued, the topic moved on to water quality. Jecheol Industrial, together with POSCO and RIST, conducted a hydroponics test using PosMAC rainwater storage tanks at the Protected Horticulture Research Institute of the National Institute of Horticultural and Herbal Science (NIHHS) in 2018. The test result revealed that the rainwater quality collected in the PosMAC tank was similar or even better than groundwater and tap water. There was no trace of any E. coli or heavy metals as well. CEO Seo explained, “Rainwater is usually contaminated by sunlight and changes in temperature. PosMAC rainwater storage tanks are buried underground. Sunlight can’t reach there, and the temperature change is negligible, so the chances of contamination are fairly low.” 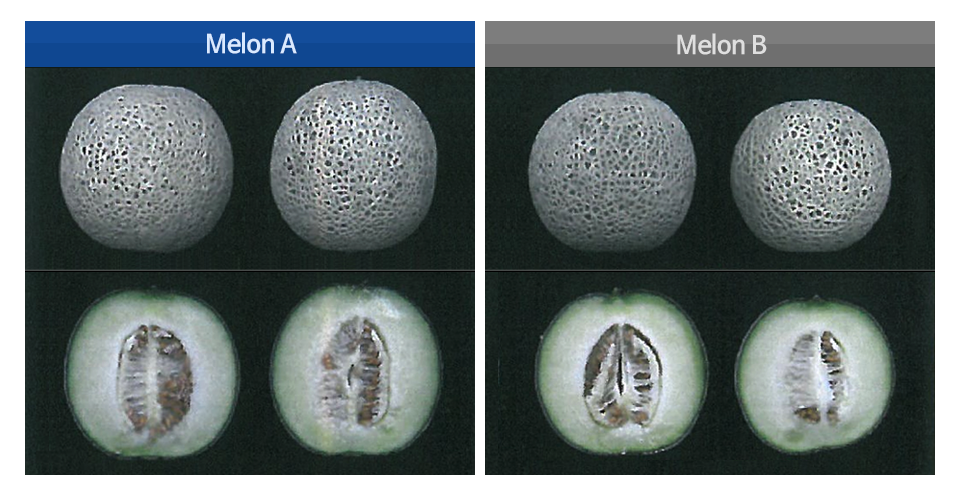 ▲ Source: Test result of the hydroponics test using water from PosMAC rainwater storage tanks at the NIHHS Protected Horticulture Research Institute (December 4, 2018). Melon A, which showed better growth, was grown with rainwater from the PosMAC tank. Whereas, melon B was grown with groundwater.

As mentioned earlier, Jecheol Industrial is the only company in the world that produces PosMAC rainwater storage tanks. These days, however, there are some fake products that mimic PosMAC rainwater storage tanks. These products use aluminum or zinc galvanized steel that are not as corrosion resistant as PosMAC is. They also adopt welding methods to connect each steel sheet instead of inserting rubber materials, thus damaging the inner layer. In short, the material degrades the durability of the product, and the processing method also downgrades stability.

Why is the company so sensitive to fake products? Is it just because they are competitors? The answer is no. CEO Seo replied that this was because it could cause customers to misunderstand Jecheol Industrial’s genuine products. When rainwater storage tanks are made in the form of corrugated steel pipes with aluminum or zinc galvanized steel, they are bound to be oxidized over time. The misunderstanding begins here. The moment people start to think that corrugated steel tanks rust easily, the negative image will spread in the market, and this will affect PosMAC rainwater storage tanks as well. In response to these worries, Jecheol Industrial put the phrase, “Beware of fake products” on the main page of its website, emphasizing the distinctiveness of PosMAC rainwater storage tanks. 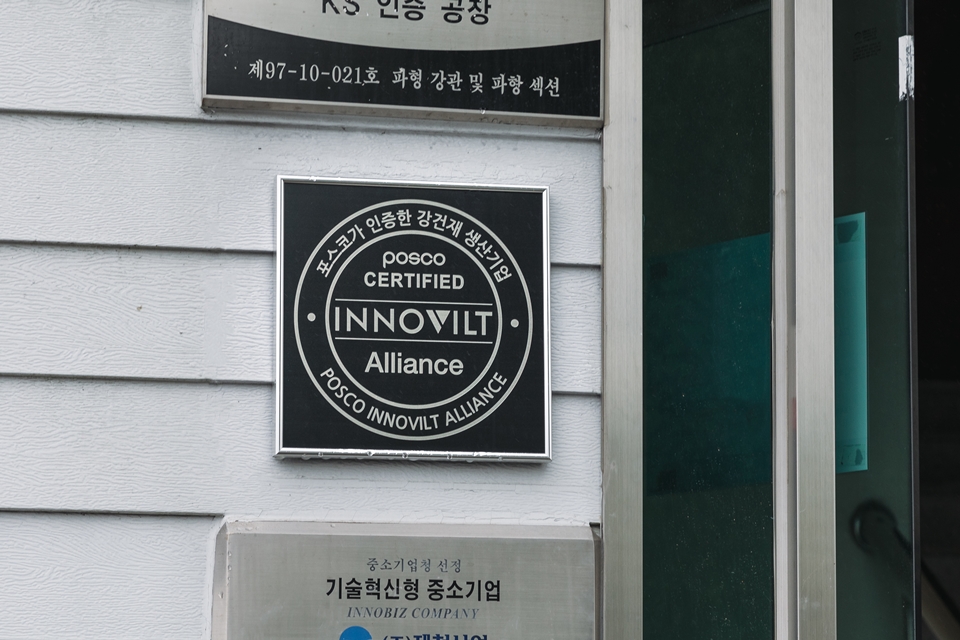 ▲ The INNOVILT Alliance mark placed on the wall of Jecheol Industrial Co., Ltd.

POSCO and Jecheol Industrial are tied as INNOVILT Alliances. Ever since the PosMAC rainwater storage tank was selected as an INNOVILT product, inquiries from customers have been rising. CEO Seo said, “As POSCO guarantees product quality with the INNOVILT Alliance, customers trust our products more, and employees are able to sell them with more confidence.”

POSCO’s Yu-Rae Jo also expressed his gratitude. He said, “Last year, the cumulative sales of PosMAC exceeded 1 million tons. The reason how PosMAC could shine brightly in such a short time is that many companies like Jecheol Industrial credited and utilized PosMAC. In the conservative construction market, it isn’t easy to choose new material over conventional ones. But Jecheol Industries believed in us and used PosMAC from the very beginning. I think that such cases have come together and enabled us to cumulative sales of one million tons.”

Director Sung-Yeal Bae also added another story. It was about how Jecheol Industrial was able to resolve a client complaint with help from POSCO. He explained, “PosMAC tends to lose its gloss when exposed to excessive heat. In the early stages of development, a customer saw this and filed a complaint suspecting that the product was from stock and not newly made. At the time, the problem could be solved by showing the material related data that POSCO had provided. Since the data is from POSCO, a reliable company, we are receiving great help in terms of reliability.” 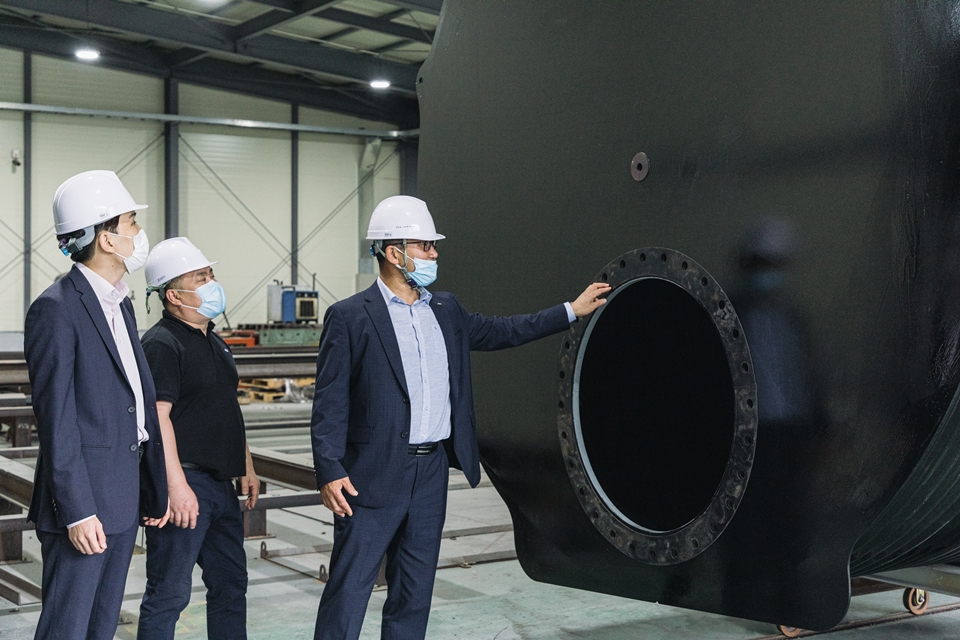 Jecheol Industrial and POSCO are currently envisioning a new project. They are working on a strategy to create a demonstration case of a “river type corrugated steel tank” that is installed along a stream to prevent the stream from drying out or flooding. They are also working on the research and development of an “underground joint zone,” an upgraded version of the PosMAC rainwater storage tank. It seemed apparent that when the two join forces, the PosMAC market and the rainwater storage tank market will continue to expand. Using POSCO’s eco-friendly steel to make tanks will benefit society as well — since it will help resolve water shortages and also protect the environment.