On February 7, 2012, a tragic accident occurred in Gyeongsangnam-do Province. A van drove into the railing on a bridge and crashed to the bottom of a river. Four people lost their lives, and six others were seriously injured in this accident. Thirteen days later, a similar accident occurred in Seoul. A tourist bus overturned near a tunnel and collided with an oncoming car on the other side. Fortunately, the bus was stuck on the railing and avoided crashing to the bottom. Most of the passengers on the bus who were taken to nearby hospitals didn’t suffer any severe injuries. The two accidents seem quite similar but had completely different results. The reason behind this is none other than “Guardrails.”

The railing at the site of the first accident was an unclassified aluminum guardrail that failed to stop the three-ton van from crashing to the ground. On the other hand, the railing installed at the site of the second accident was an SB*4 grade steel guardrail designed to protect up to 14 ton-65 km/h trucks. Thus, the guardrail was able to withstand the 16-ton bus. *SB(Safety Barrier): A grade that indicates guardrail performance. Based on strength performance, it is categorized into 1 to 7, with a higher number meaning better strength. High level (SB4, SB5, SB5-B) guardrails are usually applied in hazardous areas.

The company to be introduced today is the manufacturer of these steel guardrails. Join us as we present to you DASCO, a company making reliable products that are in charge of the safety of drivers and pedestrians.

l DASCO: A Company that Laid the Foundation for Road Safety in Korea

Founded in 1996, DASCO specializes in manufacturing construction materials and road safety facilities. The main products of the company are guardrails that are installed on roads and bridges. DASCO currently operates four sites in Hwasun, Dangjin, Busan, and Seoul.

DASCO, which boasts the largest share in Korea’s road safety facilities market, is known for having conducted the first guardrail crash test in Korea. It was only in 2001 that the standard for the crash test of road safety facilities was established in Korea. DASCO CEO Sang-Won Han recalled, “In 1998, many guardrails broke when a vehicle running at 80 to 100 km per hour crashed into them. There were also frequent cases where cars ran over the guardrails.” 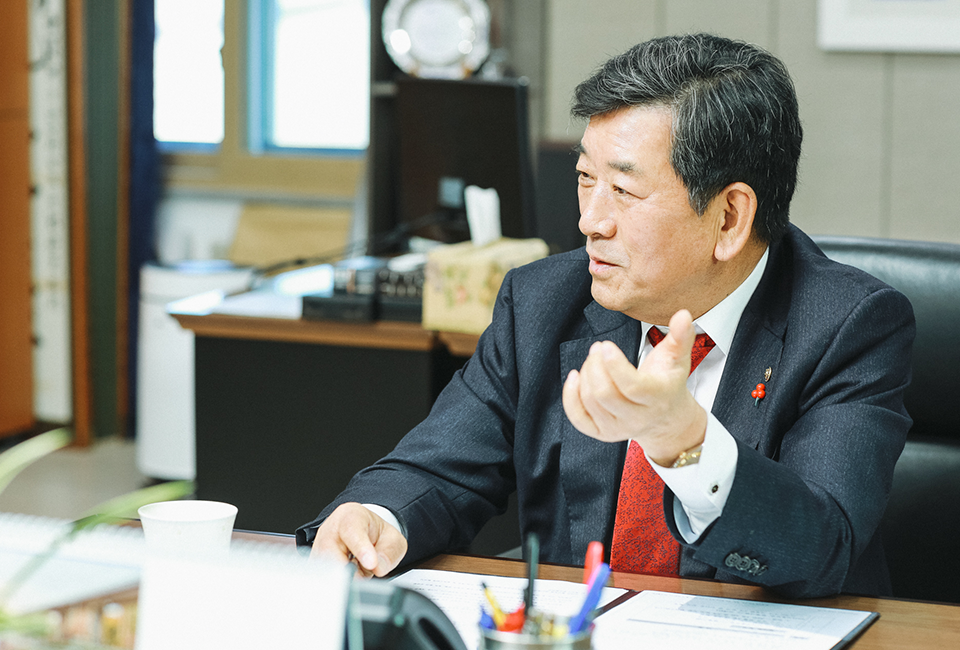 Recognizing the importance of safety earlier, DASCO took its high specification guardrail, which was developed together with POSCO, to the U.S. in 1997. DASCO received verification of its technology here through a real crash test at the Texas A&M Transportation Institute (TTI), an authorized international testing agency. The product behind this story is the High Specification Guardrail, which was designated as the New Construction Technology No.101 and led to the growth of DASCO.

All of DASCO High Specification Guardrails are made of POSCO’s high-performance hot-rolled steel. Behind this decision lies DASCO CEO Sang-Won Han’s belief that national safety facilities shouldn’t be made with cheap materials. CEO Han said, “Using POSCO steel helps in preventing more accidents. There’s no point in comparing the safety of POSCO steel, which are manufactured under thorough quality control, with other cheap steel that can’t even be verified.”

▲ DASCO High Specification Guardrail which is designated as the New Construction Technology No.101

Besides their names that seem similar, POSCO and DASCO share something more than just steel materials. They share a collaborative relationship that has been lasting for 23 years, ever since the development of steel guardrails in 1993.

Steel materials are essential in manufacturing DASCO’s main products. This is why POSCO has been involved in active research and development since the beginning of DASCO. DASCO’s Yong-Ok Kim said, “We are POSCO Family. POSCO is working together with us through the entire process — from the early stage of product development to material research, as well as the final crash tests. POSCO also offers help when we need advice or verification on structure analysis or materials. If there’s a problem with the developed product on-site, we solve it together. In fact, I think I talk with POSCO researchers on the phone almost every day.” POSCO’s Ho-Jin Kwon added, “DASCO has an abundant field experience, so they are able to propose excellent product concepts. When DASCO’s ideas and POSCO’s solutions come together, they create synergy, and in the process, we also build up mutual trust.”

The collaboration based on trust yielded another outcome. In 2001, POSCO and DASCO succeeded in jointly developing a protective barrier (railing) optimized for bridges, the POS-Barrier.

· Guardrail: A safety facility installed to prevent vehicles on roads from going off the roadway or invading opposite lanes. It is a ductile protection fence that mainly functions as a shock absorbent, with some deformation when crashed on by a vehicle. Side guardrails are installed on the end-side of the road while median strips are placed in the middle of the road to divide lanes.

· Steel Barriers for Bridge: Safety facilities installed on bridges to prevent vehicles from falling over the bridge. With a maximum deformation limit of 30 cm, the facilities are high strength performance infrastructures.

There’s a high risk of falling in case of accidents on bridges, so barriers installed here have a more rigorous quality standard than other road guardrails. There are many things to consider, as it must have two functions at the same time: 1) preventing the fall of large vehicles, and 2) absorbing the shock of small vehicles is another. 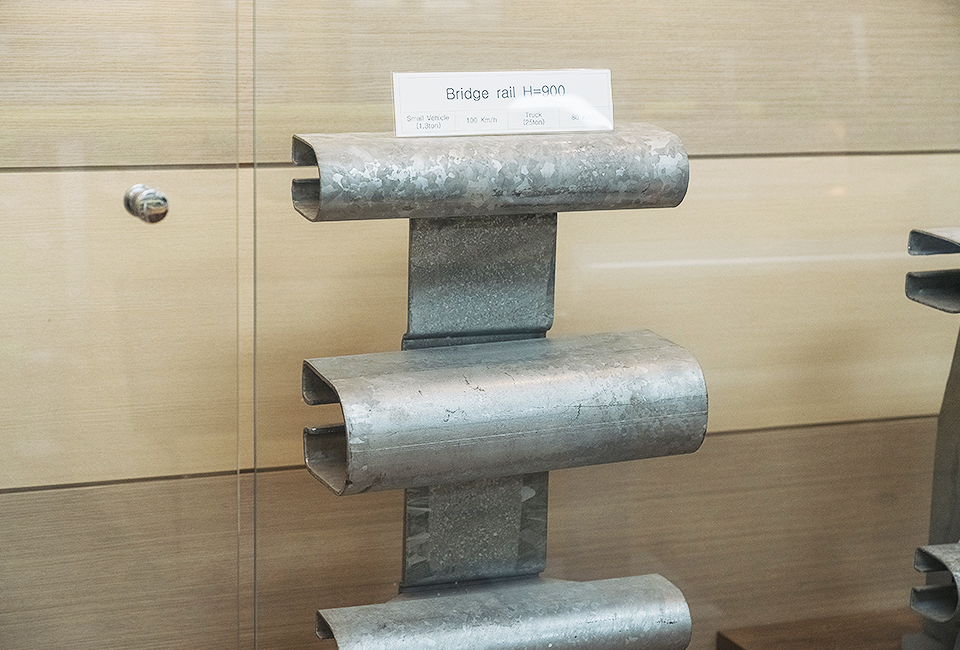 In the past, concrete and aluminum were applied to most barriers for bridges. However, both materials have shortcomings. Concrete is much more solid than vehicles, so it directly delivers the impact of the collision on the vehicle and the driver, instead of absorbing it. Aluminum is ductile and can absorb shock, but since it lacks strongness, it is unable to prevent the collided vehicles from leaving the road. Then what material would be most appropriate? The answer is steel, which is high-strength yet ductile at the same time. With steel, POSCO and DASCO could come up with a barrier that supplements the shortcomings of concrete and aluminum barriers and maximize their advantages.

Recognized for excellence in many aspects — including passenger protection, vehicle induction performance, securing visibility, and constructability — this steel barrier for bridges was named as the New Construction Technology No. 294 and installed on Yeongjong Bridge for the first time in Korea. Since then, this product has been used on most large bridges, such as Incheon Bridge, Gwangan Bridge, Yeongdong Bridge, Cheonho Bridge, and Yi Sun-sin Bridge. As can be seen here, the railings on major bridges in Korea are mostly DASCO steel barriers. Following technology verification in Korea, DASCO succeeded in landing projects overseas as well, including the Kuwait Causeway Bridge and Saudi Arabia’s Riyadh Metro in 2015. The Causeway Bridge project is significant in that it was the first overseas project that DASCO had won with technical support from POSCO. The railing of the Causeway Bridge is the World’s longest with a whopping 207 kilometers.

l INNOVILT Steel Barriers for Bridges: How Are They Made?

Here’s one more interesting fact. So far, there has not been a single fatal accident on bridges that have installed DASCO steel barriers. Then how are these amazing structures are made? Let’s look into the story!

DASCO steel barriers for bridges are manufactured in five stages. First, high-quality hot-rolled coils from POSCO travel to processing centers where they are formed into skelps — steel cut into strips. When these coil-shaped skelps arrive at DASCO, they go under an Uncoiler, which makes them flat. Next, bolt holes that are used for tightening purposes are drilled on them, and they pass through the forming roll where they are shaped into desired forms. The dozens of forming rolls varying in shape and size bend the steel material to suit its application. Once the shaping process is finished, the product is cut according to the customer’s needs.

Lastly, the products are sent to a surface treatment plant for hot-dip galvanizing before being used on-site. The galvanizing process prevents rust and corrosion of the products when installed at the site.

The reason why long-range bridges both in Korea and overseas require DASCO products is this: DASCO has the technology to develop and apply customized products according to the requirements of its customers. In most cases of Landmark bridges, they require a customized barrier design depending on their length. The Yi Sun-sin Bridge is a typical example. The client requested that the curb height be 5 cm, which is much lower than the national standard of 25cm, due to the wind load. At that time, there weren’t any products that could meet this requirement, so DASCO started from the initial design and completed the project with a newly developed product. DASCO considers that this competence — reflecting all on-site requirements — is why its clients credit the company.

DASCO is making further strides into the future as well. With the technology accumulated in the road safety business, the company is actively entering into the construction and new renewable energy (solar) market. It has secured a competitive edge in quality by adopting PosMAC, POSCO’s corrosion-resistant steel. Once more, new synergy is expected from the collaboration of the two companies. Check out other business areas of DASCO on its official website! 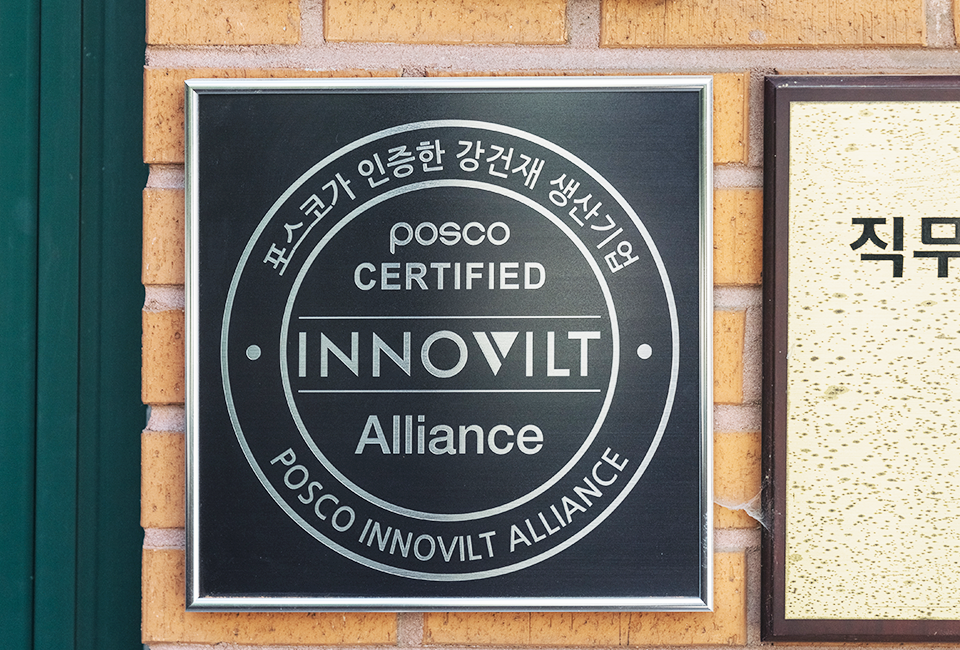 ▲ The INNOVILT Alliance mark placed on the wall of DASCO

Following the steel barrier for bridges, the high-performance guardrail made with PosMAC was selected as an INNOVILT product as well, making DASCO a company of two INNOVILT products. DASCO’s Min-Gyun Nam said, “Thanks to the INNOVILT Alliance mark, there’s no need for further explanation. Unlike in the past, where we had to put in considerable effort in marketing and sales, these days, one simple explanation says it all: we are a POSCO-certified company. As we are making facilities for the safety of people, we will continue to gather credibility with our technology and products verified with POSCO.”

POSCO and DASCO share a special relationship, and it seems like there’s nothing that can’t be done if the two join forces together. POSCO Newsroom hopes that the achievements of mutual trust and effort that they share will further expand through INNOVILT Alliance.