POSCO works closely with its partners to provide customized solutions for their products. One of POSCO’s biggest partners is GM Korea, and their auto-steel partnership goes back 15 years. On May 30th, as part of POSCO’s Solution Marketing 2.0 initiative, GM Korea representatives visited POSCO’s Global R&D Center in Incheon to take part in various programs. This event follows the successful launch of the 2017 All New Chevrolet Cruze made with POSCO GIGA STEEL. GM Korea’s representatives were invited to take part in a fatigue test, a high-speed crash test as well as to tour of the labs and discuss Chevy’s All New Cruze.

The 2017 All New Chevrolet Cruze 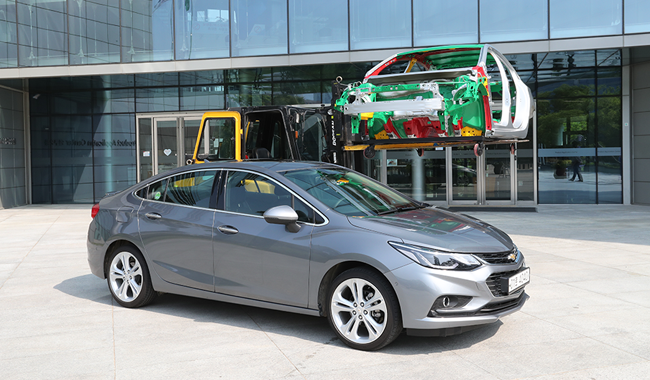 Last year’s All New Malibu used POSCO’s HSS and AHSS for the entire body of the car and received the highest safety rating in the New Car Assessment Program conducted by the National Highway Traffic Safety Administration in the U.S. There is a more advanced version of HSS and AHSS from POSCO in the 2017 All New Chevy Cruze than in the Malibu, ensuring an even safer vehicle.

More than 20 percent of the HSS and AHSS used in the All New Chevy Cruze is POSCO GIGA STEEL. It has a tensile strength of 1 GPa or more, plus 3 to 5 times more strength than mild steel. A 10×15 cm piece of POSCO GIGA STEEL can withstand the weight of 1,500 cars weighing one ton each. In addition, it is 3.5 times and 2.1 times cheaper than aluminum in terms of material cost and processing costs, respectively. With POSCO GIGA STEEL, vehicles can also achieve a 10 percent decrease in CO2 emissions.

More Than Just a Steel Supplier 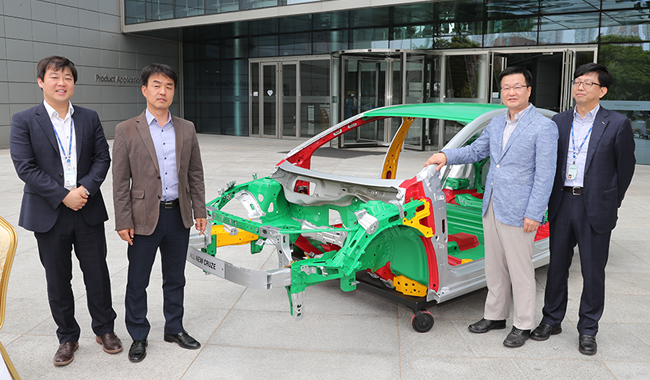 POSCO GIGA STEEL is a major breakthrough solution for vehicles as it is high in strength, easy to process, lightweight, eco-friendly and cost effective. POSCO hopes to provide such solutions in other areas as well, namely electric cars. Currently, researchers are working on an electrical steel sheet that can minimize the power loss of motors as well as new technology to protect car batteries. In doing so, POSCO will continue to collaborate closely with manufacturers early on in their product development and deliver the most innovative solutions to meet their needs.