Mr. P’s family decided to take a quick trip to the ocean and enjoy the cool autumn breeze. What POSCO technologies did they encounter this time? Find the Hidden POSCO with POSCO Newsroom. 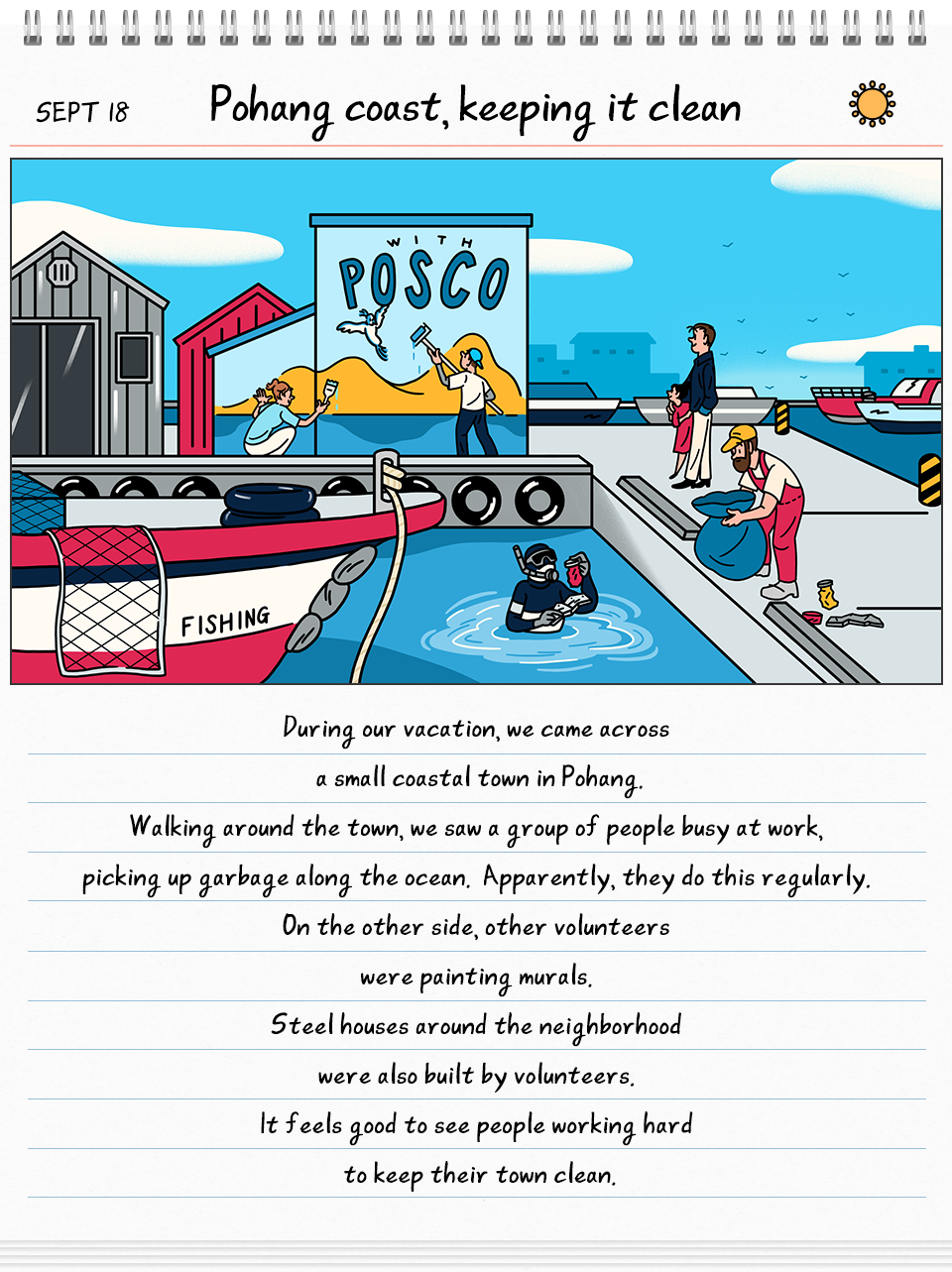 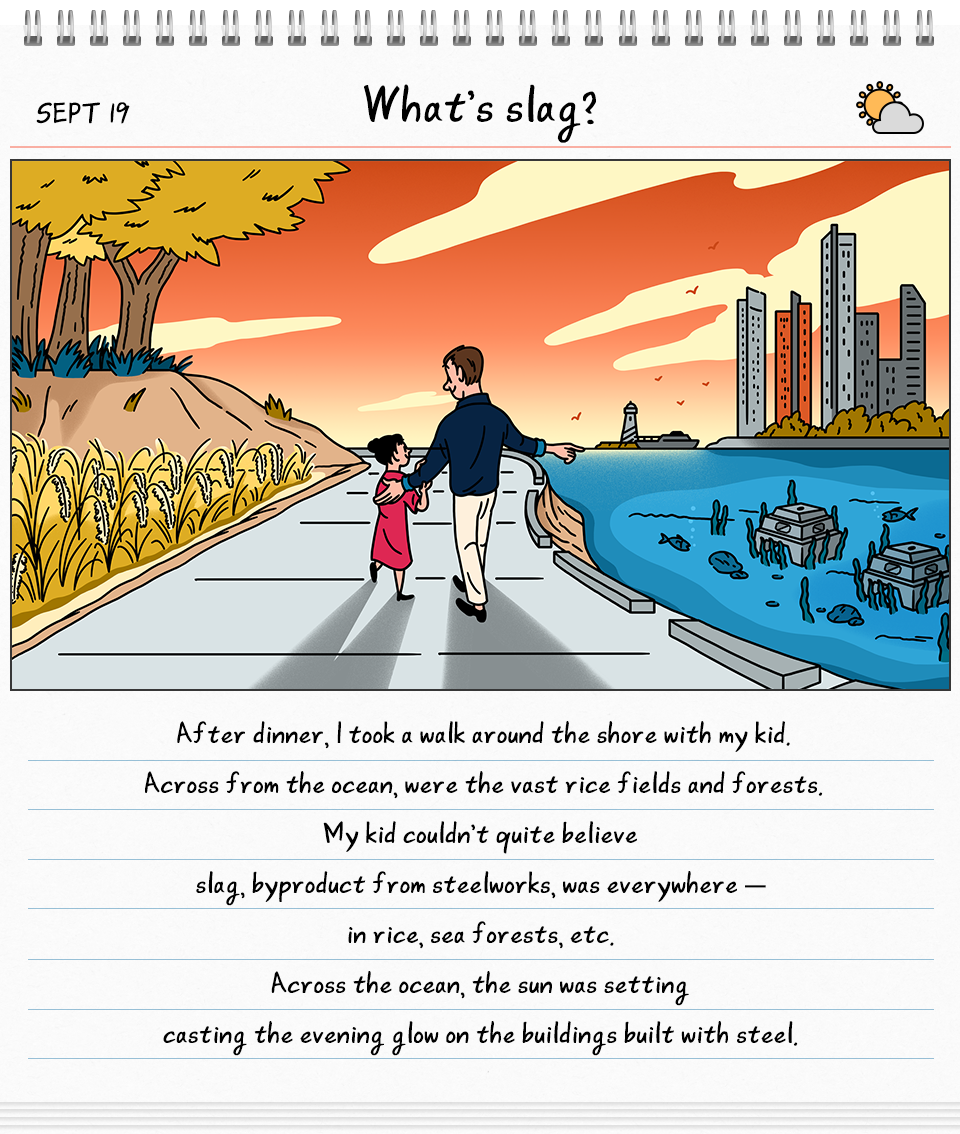 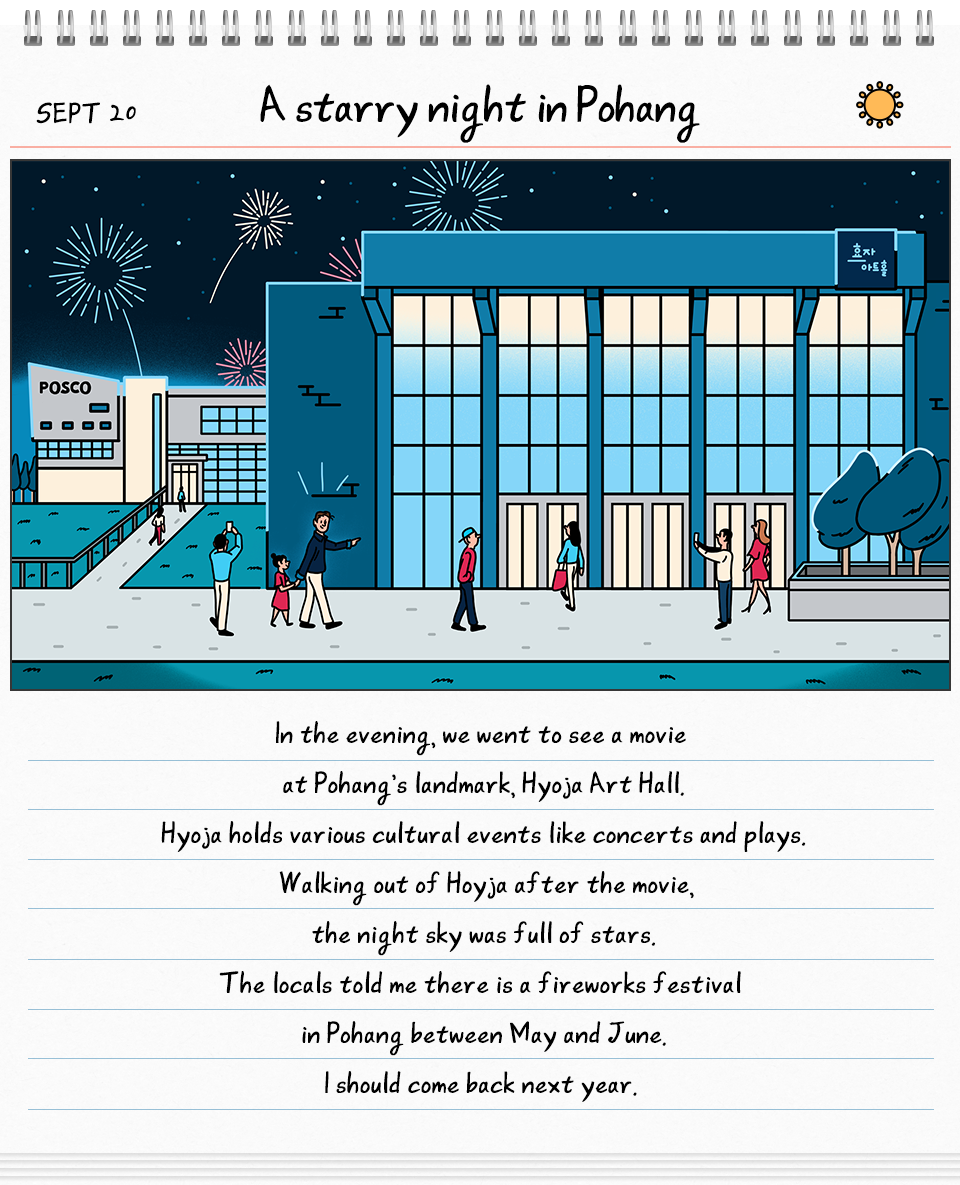 ① Saving the Waters with ‘POSCO Volunteers for Clean Oceans’

Launched in 2009, POSCO Volunteers for Clean Ocean started with a group of passionate scuba divers who are POSCO employees. Since then, they have been volunteering to collect various ocean wastes and starfish from Pohang, and Gwangyang where POSCO steelworks are located. POSCO Volunteers’ cleaning activities also extended to other areas like Incheon, Gangneung and Ulleungdo.
They’ve collected 1,650 tons of marine debris through over 540 underwater clean-up activities. Their volunteering is not just saving the oceans but also helping improve the livelihood of local fishermen.

With #SteelSaveEarth campaign this year, POSCO is channeling its effort on collecting plastic wastes from the ocean. The work of POSCO Volunteers for Clean Oceans will continue to protect Korea’s water resources and marine ecosystem.

The employees of Pohang Steelworks continue practicing the spirit of community service through donating their talents. POSCO’s talent volunteer group participates in regular weekend volunteer activities to spread the company’s ‘With POSCO’ principle that seeks mutual growth. Recently, mural painting volunteers created color murals near the Pohang canals where many tourists visit. Various other POSCO volunteers also participated in senior care, especially those living alone, replacing old wallpaper, floorboards, and lighting to help improve their living conditions. POSCO employees are regularly donating their time and talents as a way to express their gratitude toward the community. Altogether 10 volunteer groups are active in the region, participating in such activities as mural painting, reforms, electric repairs, senior care, technical volunteering, tutoring, and ocean clean-ups.

POSCO STEEL HOUSE is designed to protect people and their properties from disasters like earthquake, typhoons, and fires, by applying stronger and more durable techniques than any other construction methods. STEEL HOUSE is a residential structure using internal and external steel with a thickness of 1mm. Strong enough to withstand earthquakes and yet, it has a short construction period. With thin walls, STEEL HOUSE can create a spacious living space, making it an economical choice for both constructors and residents. Because it uses a dry construction method, not only can it be built quickly, it can also be constructed at any time of the year.

Since 2009, POSCO has been collaborating with the National Fire Agency of Korea to support fire-stricken communities. POSCO employees, firefighters, and POSCO’s youth volunteer group Beyonders regularly roll up their sleeves to build steel houses and provide safe living spaces for the fire victims across the country.

A coral reef is an underwater ecosystem. Reefs are formed of colonies of polyps held together by calcium carbonate providing a home for many precious marine species. What if POSCO could create this coral reef? It sounds slightly unbecoming perhaps, but there are actually good reasons backing this unusual idea. Triton, an artificial reef developed by POSCO, is made of slag, a steelmaking by-product. Slag has high mineral content such as calcium and iron, which are useful for marine ecosystems than general aggregates. Not only can the Triton help grow algae, but it can also promote photosynthesis purifying contaminated sediments and water. Also, Triton reef can withstand typhoons and tsunamis due to its high gravity and strength. It also reduces CO₂ through carbonation and algae photosynthesis. The World Conservation Congress and the World Business Council for Sustainable Development recognized the positive contribution POSCO’s Triton is making towards the marine ecosystem and announced it as one of the best practices. In 2018, POSCO used 1,418 tritons and 12,200 underwater rocks to help expand clean spaces for the marine ecosystem.

Produced during the ironmaking process in the blast furnace, slag contains various impurities other than iron. POSCO’s slag is 100% recycled as either fertilizer or cement. Quality furnace slag is rich in silicic acid, an important ingredient to ensure a large rice harvest. Last year, about 390,000 tons of POSCO slag was used as agricultural fertilizer. Slag fertilizer not only increases the crop yield, but it also improves the taste of rice. Slag is not just a recyclable steel byproduct — as an excellent fertilizer, it is also a tremendous source of joy for farming communities.

In addition to fertilizers, furnace slag also transforms into cement! POSCO developed the eco-friendly POSMENT back in 2012 after 10 years of persistent R&D effort to recycle slag. Instead of limestone, POSMENT mixes slag into general cement for added strength. Compared to conventional cement, POSMENT can reduce up to 60% of greenhouse gas emissions. In 2018, 10.69 million tons of POSCO slag were used as cement helping reduce 8.39 million tons of net greenhouse gases.

Since its opening in 1980, Hyoja Art Hall has been providing free performances and concerts for POSCO employees and Pohang residents. The performance facilities and safety management have seen a steady improvement, but POSCO invested in a full remodeling of the space last year to further improve the audience’s experiences. In 2006, Hyoja Art Hall was selected as an excellent performance facility and has been at the forefront of implementing “With POSCO” vision through free performances for the residents, and free rentals to help develop local talents.

If Hyoja Art Hall is the cultural hub of Pohang, what about Gwangyang? Opened in 1992, Gwangyang’s Baegun Art Hall holds 990 seats and is a cultural hub of Gwangyang, Like Hyoja, Baegun has been presenting various cultural events including classical music concerts, musicals, plays and films for POSCO employees and the local population, free of charge.

On the first night of June this year, Pohang’s night sky was laced with vibrant colors. Established in 2004, the Pohang International Fireworks Festival celebrates its 16th event this year. In the conception stage of the Festival, POSCO focused on two themes: ‘light’ which the city of Pohang signifies and ‘fire,’ strong imagery of the blast furnace at Pohang Steelworks. Since then, the event grew to become global-scale and the themes of the Festival are much more diverse than simple flame imageries. Regarded as one of the top summer festivals in Korea, Pohang International Fireworks is now attended by over 2,000 visitors and features not only spectacular fireworks but also various street performances, culture exchange programs as well as movie screenings.

Though it might seem invisible, POSCO is indeed breathing all around us. And we’re not just talking about its products and technologies. As a corporate citizen, POSCO’s constantly reaching out to spread its community spirits. Perhaps, the most essential is invisible to the eyes but can be felt only with the heart. Beyond hardware, POSCO’s creating many pieces of ‘heartware’ across every corner of our communities. Listen. POSCO’s heart is beating strong — here and now.