The mere mention of the city conjures up images such as towering skyscrapers, luxury hotels and mysterious desert dunes. 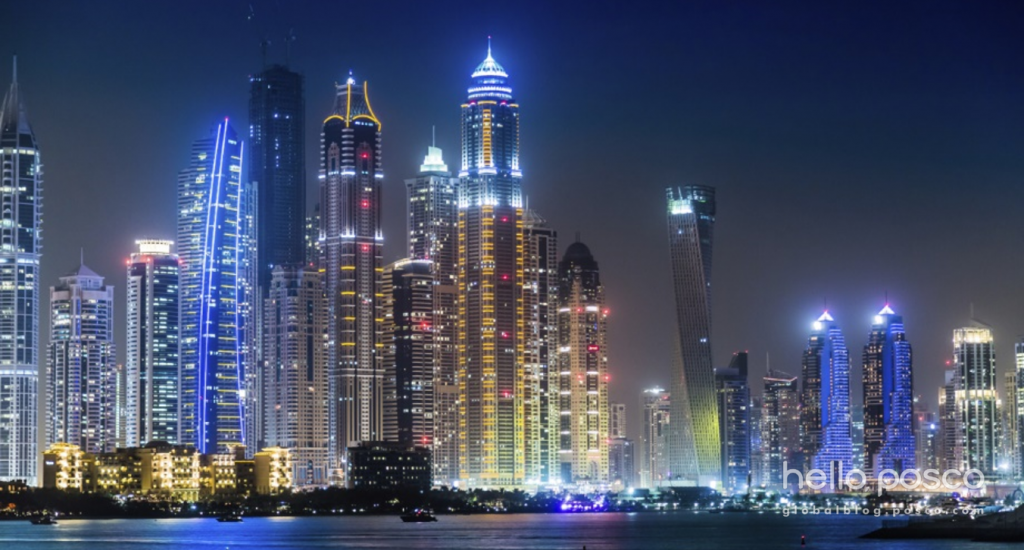 But compared to its neighboring emirates, this “Miracle in the Desert” has very few gas reserves. As such, Dubai began preparing for the post-oil era long before its onset. The large increases in oil prices after the Gulf War of 1990 encouraged the city to focus its efforts primarily on free trade and has since transformed into a global hub for trade and logistics.

Now, countries throughout the Middle East are looking to Dubai, which is considered the world’s most strikingly modern and prosperous city, as a model of success.

Seeing the potential of the region, POSCO opened its first office in the Middle East in Beirut, Lebanon, in 1975. Later, in 1998, the steel company opened the Dubai presence of its Singapore office, which was promoted as the Dubai office in 2006. 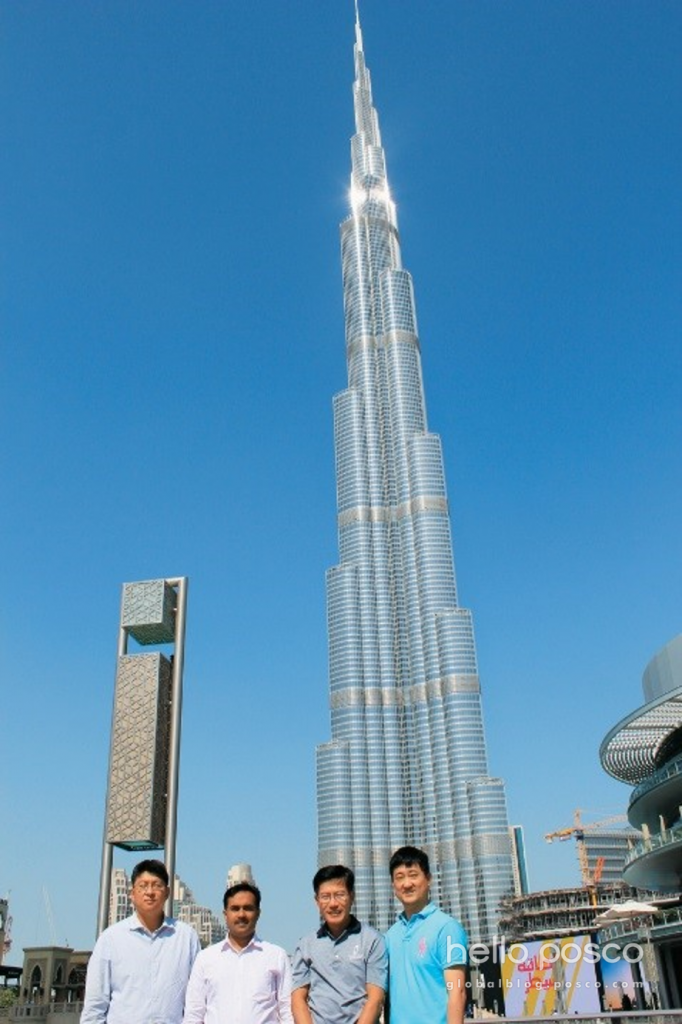 Currently, there are four employees working at this location who oversee POSCO activities in 19 countries: 14 in the Middle East and 5 in North Africa.

In response to changing marketing conditions, the Dubai office is working to increase the sales of products by focusing on reinforcing its solution-based marketing capabilities. It is also working hard to promote POSCO’s innovative solutions to its clients ordering construction projects, and is seeking to create new business opportunities with other Middle Eastern offices of POSCO affiliates.

To get an idea of where the future of POSCO is headed in terms of construction, it only makes sense to take a look at some of Dubai’s most impressive architectural projects of the past which used steel as a construction material. Here are three of them: 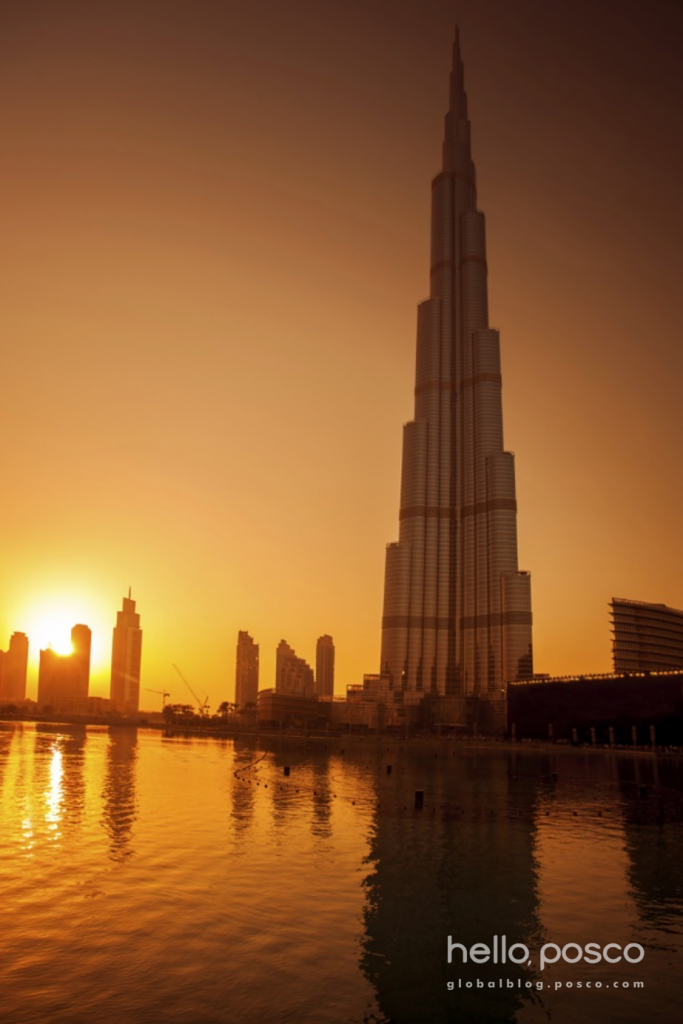 Also known as the “Jewel of Dubai”, this 164-story building is the tallest free-standing structure in the world. The building took about five and a half years to build, and used over 31,400 metric tons of steel rebar. Laid end to end, this would stretch over a quarter of the way around the world!

The Burj Khalifa has since become a symbol of the wealth and progress embodied by the Persian Gulf city and currently houses a mix of residential spaces, corporate suites and the Armani Hotel Dubai, the world’s first hotel designed and developed by Giorgio Armani himself.

Also a record-breaker, the Princess Tower is the world’s tallest residential tower at 414 meters and 107 floors. The building boasts 763 luxury apartments, including a number of penthouse apartments overlooking the Palm Jumeirah, a dramatic artificial archipelago that resembles a palm tree.

Yet the most impressive aspect of the Princess Tower is its grandiose exterior, which includes a decorative dome that sits atop the building like a giant crown. The dome, which was finished in February 2012, has a mast on the top of it, which weighs 110 tons and is made of aluminum and steel. 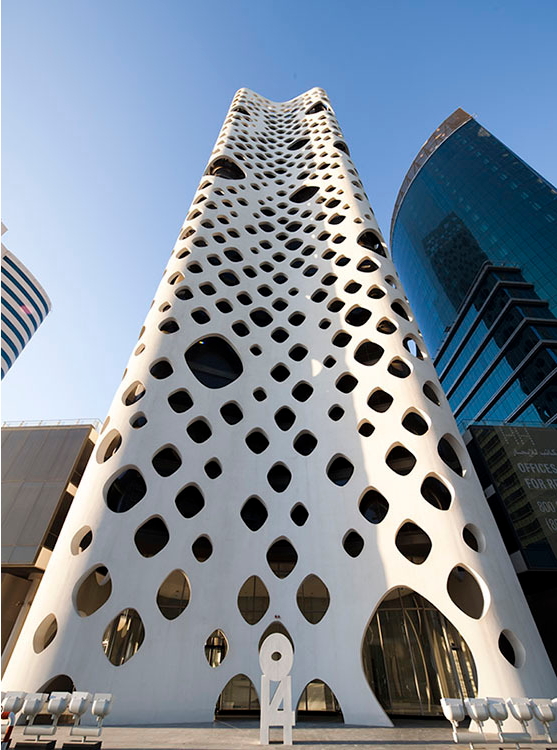 O-14’s façade is an inventive merger of structure and solar shading that is based on a perforated exoskeleton that challenges the concept of an office building altogether. The 1,300 openings in the tower’s shell create a sensational show of natural light that allows for a unique and ever-changing interior space, and permits cool air to filter through the building, thus saving energy.

The outer concrete and steel skin of O-14 also play a fundamental role in supporting the inner tower with an array of linking beams. Eliminating the need of interior columns creates more floor space, and as such, more areas for rent.

Considering the fact that Dubai is seemingly always under construction, and in constant pursuit of breaking even more world records, it’s certain that the demand for steel and POSCO’s services will continue to increase.