Every day some 4,000 dabbawalas, or packed lunch boys, set off across Mumbai’s remote outer suburbs to pick up and deliver hot meals to hungry office workers in one of India’s biggest cities. The service has been around for over a century and has been carried out with such precision that the meal delivery system, which powers its operations with sandaled men, public trains and reusable containers, was recognized at the six sigma level of efficiency by Forbes. That means that in every six million deliveries, around only one mistake is made—a figure that puts the world’s corporate performance and supply chains to shame.

The tradition began when a Parsi banker wanted to have home cooked food regularly delivered to his office and gave the responsibility to the first ever dabbawala. It soon caught on among others and the demand for the meals-on-wheels service soared.

Steel, the Preferred Metal for Your Meal

While the wala, or carrier, is no doubt the driving force behind the system, the dabba, or lunchbox, is a central component of India’s meal delivery culture. Widely used throughout the subcontinent, these multi-tiered “tiffin” (Indian English for a light midday meal) carriers are generally made from stainless steel and can keep food warm for up to three hours.

In addition to the tiffin boxes’ warming properties, the fact that they are made of steel means they offer plenty of other benefits, too. For one, they don’t leach toxins like plastic, ensuring food is safer, and they’re also more hygienic and easier to clean than those made of other materials—a big plus when it comes to rinsing off curry, vegetable and dal residue. Furthermore, the containers are durable and sustainable, meaning they don’t damage easily and can virtually last a lifetime.

Similar types of lunchboxes are also commonly used in other parts of the world, such as Southwest Asia and Northeast Africa, as well as parts of South America and Europe. Like India, the boxes in these containers hold much more than just food. They often contain mementos—a flower, a movie ticket, an apology note—and more importantly, love from the cooks, who are usually hardworking housewives. But the journey these steel boxes must undergo is a lengthy one—one that takes a dabbawala an entire day to complete.

A Day in the Life of the Dabbawala

By 9 o’clock every morning, the dabbawala has hit the streets, pedaling his bicycle—one designed with extra iron to withstand a heavier load—through the congested Mumbai traffic to his assigned area. As many older buildings are not equipped with elevators, the dabba climbs up and down the towering residences to collect the tiffin boxes from homes.

By the time he completes the collection, it’s already about 10:30am. He now carries the 30-40 lunchboxes he has accumulated on his bike, undeterred by the poor road conditions, mud, traffic and merciless Mumbai monsoons that plague the region every summer.

He then reaches the nearest railway station where fellow dabbawalas gather and sort the tiffins by destination utilizing a simple but seemingly flawless coding system. By now, most of his tiffins are handed over to other teams dispersing to various parts of the city. He joins one of them, and with his teammates, transfers different tiffin boxes in crates and hastily transports them to the railway platforms on his head. 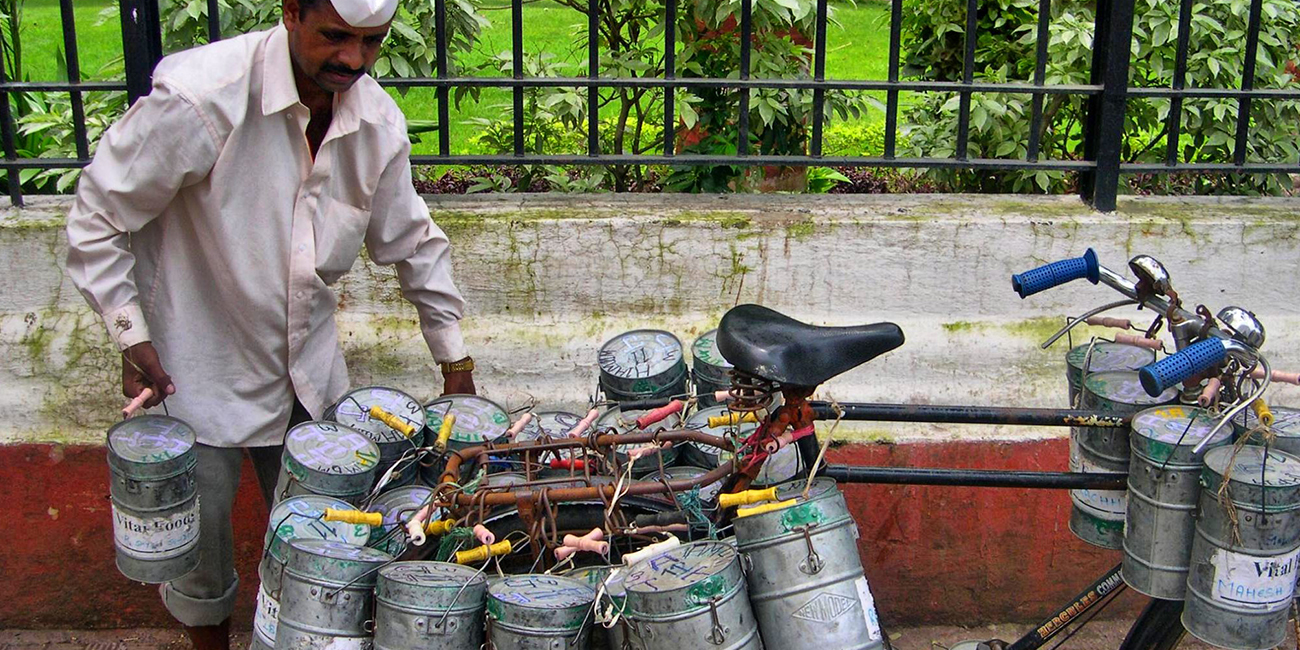 If a tiffin is on a complex route, it is further sorted on the railway platform where even more dabbawala teams work together to move the wooden crates into the trains. With the boxes put away in the luggage compartments, the men can take a short break before arriving at their assigned stations around noon.

Racing against the clock, the wala rushes out of the station with the lunchboxes atop his head and once again disperses them among other teams. Joining yet a different group, he and the men place the boxes in trollies and dash toward the business centers, the final destinations for the tiffin boxes.

As they do, pedestrians make way for the shouting, pushing dabbawalas, knowing well that they don’t stop for anyone. Each man then takes the responsibility of delivering the lunches to separate buildings, moving up and down the elevators. By 1pm, all are delivered, but the dabbawala’s job is not over yet. After a brief lunch, the dabbawala takes the empty tiffin boxes from the offices and repeats the process until all of the dabbas are returned to their respected homes before 6pm.

The century-old Indian meal delivery system that is powered by teamwork and steel remains incredibly efficient, even in an age where just about everything else is operated using the latest technology. Time will only tell how the process may evolve in the future (registration has recently gone virtual), but it is certain it will continue to serve as a model of service excellence for the entire world.