Close up! Life With POSCO [episode 5] 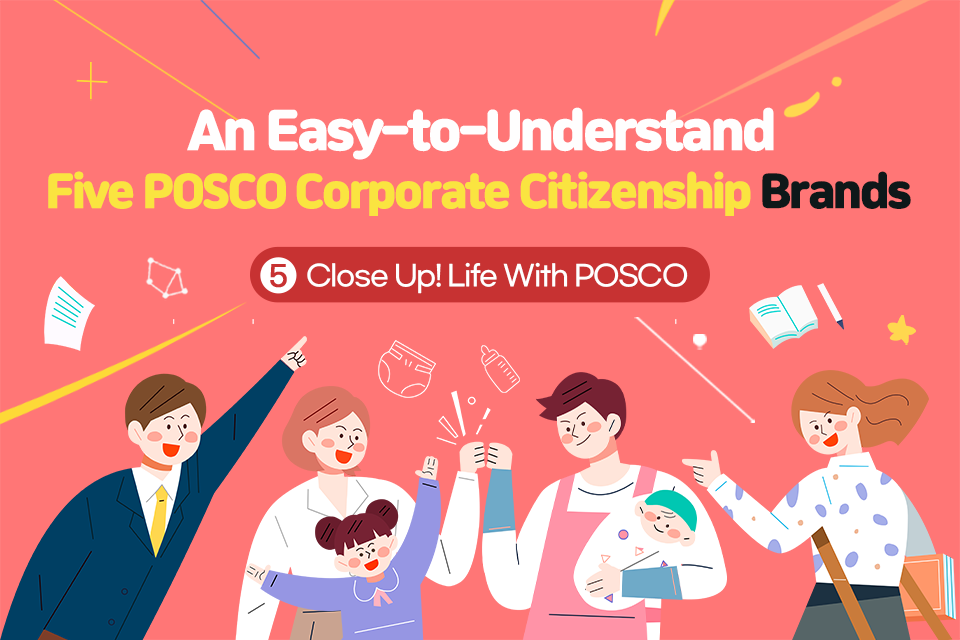 “the Five POSCO corporate citizenship Brands” represent the company that POSCO Group is aiming for. Green With POSCO, a signature brand that leads the hydrogen industry and practices ‘2050 Carbon Neutrality’, Together With POSCO, which grows together with small and medium-sized enterprises (SMEs), Challenge With POSCO, which activates venture ecosystem and fosters new growth industry, Life With POSCO, which takes the lead in resolving social problems such as low birth rates and employment and strives for a safe and happy life for employees, and Community With POSCO, which presents a model in which company and society develop together to coexist with the local community.

POSCO’s suggestion of the company’s role being maternity friendly and its support of various programs and infrastructures encourages Pohang and Gwangyang to be “family-friendly cities.” Also, series of high-quality programs allow the next generation to fulfill their dream and form a social consensus with its continued job offer for youth.

Let’s have close look for what is the program from Life With POSCO and what it has achieved!

The total fertility rate tells the average number of children one female can deliver. The analysis confirmed that the population in Korea can stand at least 2.07 of the total fertility rates, but the number fell to almost 0 in 3 consecutive years; it began to drop to 0.98 in 2018, 0.92 in 2019, and eventually became 0.84 in 2020. As a result, society faced a “dead cross” in 2019 when the number of dead is more than the birth. The situation alerted companies like POSCO to consider the matter more seriously. While fewer babies lead shrinking population, declining labor forces halt the possibility of growth for the company in economic situations.

In need of action, POSCO’s representative brand, Life With POSCO, was selected to be a role model to resolve the issue. For this year, with the experiences, the company has started more practical activities three core promotions for building social consensus, encouraging maternity-friendly culture, and lastly, improves perception for the future generation. 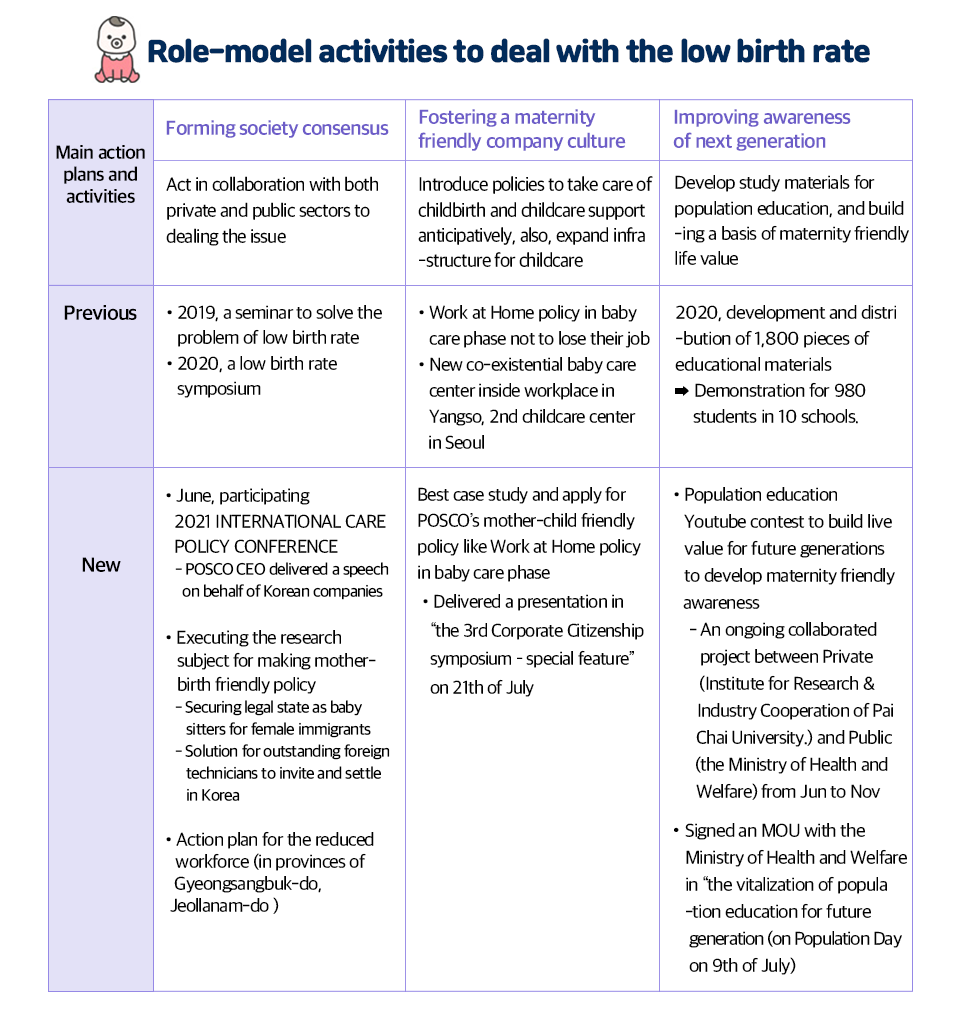 ▲ On the 3rd of June 2021, Jung-woo Choi, the CEO of POSCO, suggested a role model at the corporate level to deal with the low birth rate on behalf of Korean companies in the opening of the 2021 INTERNATIONAL CARE POLICY CONFERENCE (left) and panels watching it (right).

As a part of the action to build social consensus for the low birth rate,「2020 low birth rate symposium」 was hosted by The Population Association of Korea in support of POSCO and Presidential Committee on Aging Society and Population Policy (Korea’s Presidential Committee) inside of POSCO center in 2020. The event was such a meaningful moment to have the same public voice and broaden social discussion among academic circles, government and companies.

In the following event, Jung-woo Choi, the Chief Executive Officer of POSCO, as a representative of Korean companies, delivered a congratulatory speech in「2021 INTERNATIONAL CARE POLICY CONFERENCE」supported by The Center for Transnational Migration and Social Inclusion of Seoul National University. His introduction speech about POSCO’s internal policy for maternity friendly in a role model company and alternative solution received enthusiastic responses from attendees.

Also, its collaborated research project with the academy will give more practical options to initiate the policies such as 「Solution for female immigrants to promises working status legitimately by providing jobs like babysitters」, 「Solution for outstanding foreign technicians to invite and settle in Korea」Additionally, the effort to seek solutions with Yeong-tae Cho, the director of the Population Research Center in Seoul National University, also a demographer as well as an active lecturer, a panel of a TV show and a writer, who became famous from the show “Differential Class from JTBC”, in the subject of 「Solution for companies to deal with labor market change caused by declining young population in Pohang and Gwanyang regions」

On basis of Cho’s solution for the crisis, the research will help to monitor the population shifting in Pohang and Gwangyang and plan for future responses. Not only that, the company introduced many policies to consider employee’s life cycle following childbirth and baby care phase in terms of internal improvement of a maternity-friendly culture. In 2019, employees loved the policy such as additional leaves and expenses for those who had been treated for infertility, scholarship amount increase for families with many children. Last year, it became the first company in Korea which adopt a policy for ‘Work at Home for mothers caring for infant babies’ which supports mothers to keep on their career path and take care of their babies. In this year, various maternity-friendly policies will be analyzed professionally to select the Best Practices, which will make it the best company for the matter and everyone want to follow. 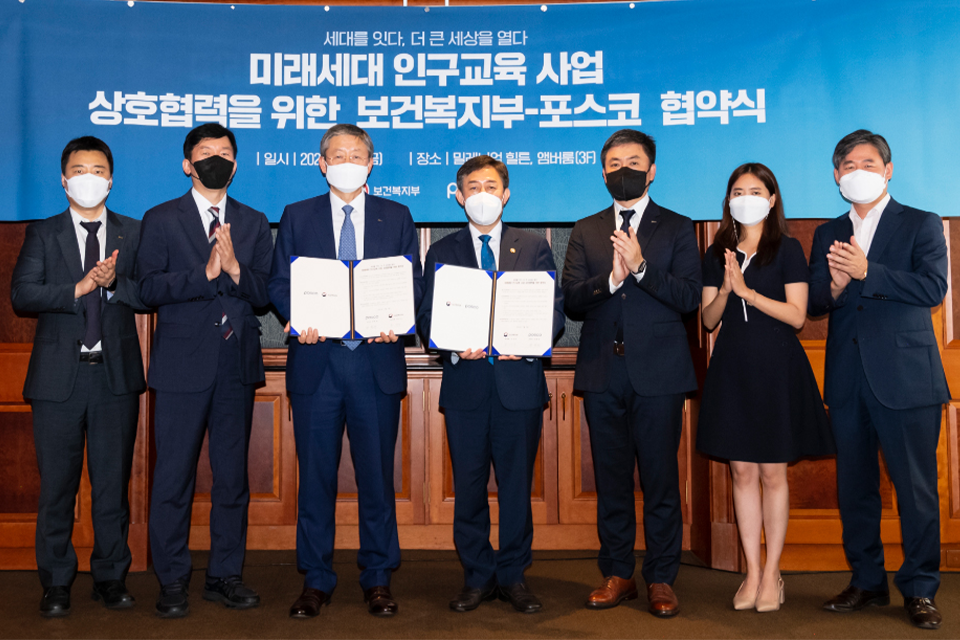 The national department has held yearly competitions as well since 2017 to develop national teacher’s professionality on population education and explore the best cases to apply publicly in schools. And the department has the plan to change the name of the contest to ‘the exhibition sharing best classes on population education in a range of Korean kindergarten to high schools’. Because of participation with POSCO, it is eventually turned into a private-public collaboration project managed by the Institute for Research & Industry Cooperation of Pai Chai University. 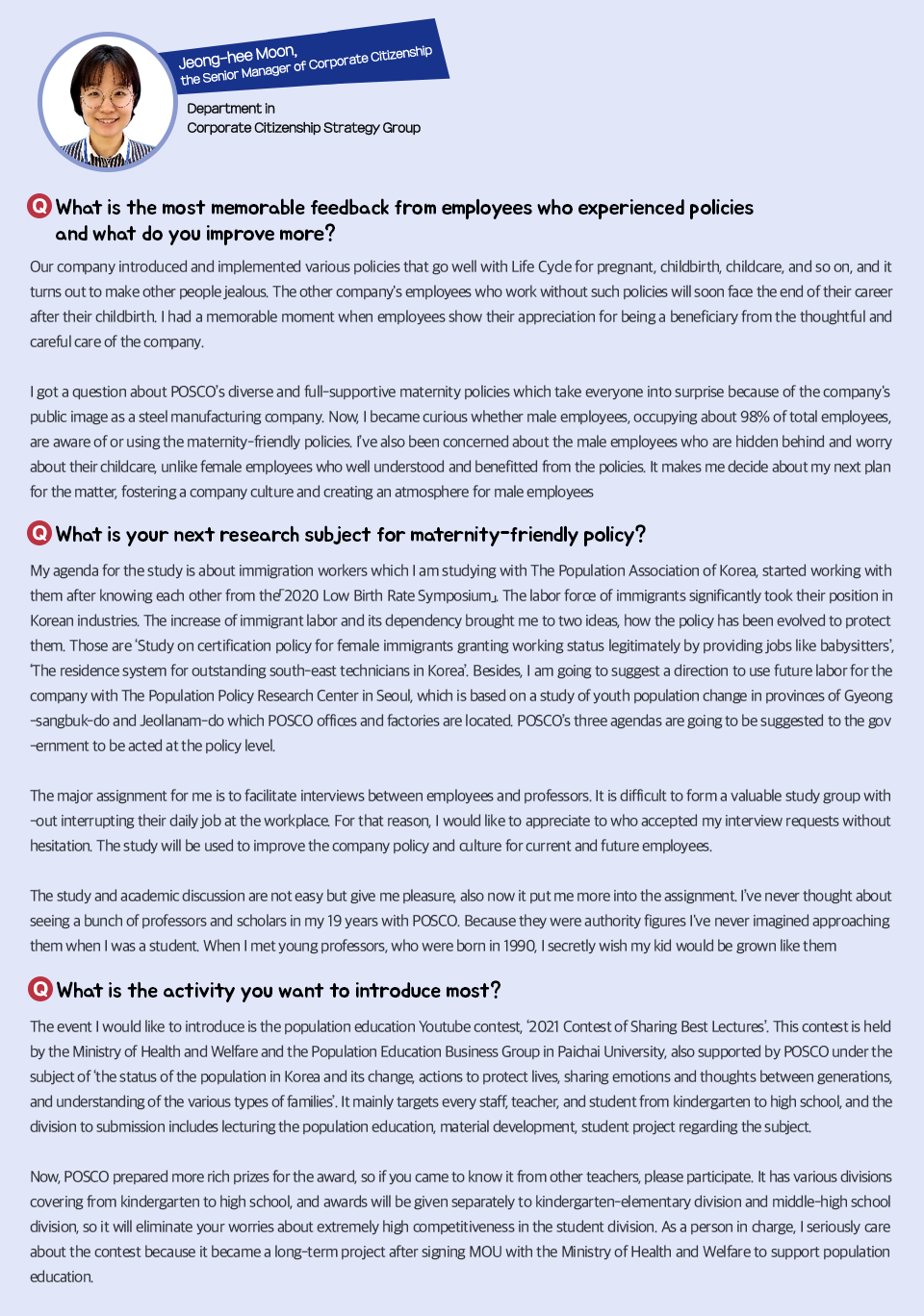 ‘POSCO YOUTH DREAM’, a program that offers a Job Search Academy, Youth Al BigData Academy, a startup incubation schools, celebrates its 3 years birthday which has started in 2019 to give practical support to youth who are looking for a job. The 1,142 graduates out of 2,601 have succussed in getting a job or starting a business by 1st half of this year, which proves its educational benefits. With the achievement from the program, POSCO has actively involved the issues by providing effective education to those who are in need.

A. Job Search Academy
It is a program to educate 800 students who graduated university or expected graduation within 6 months, welcoming 66 to 72 students per session, operating in Pohang and Songdo during 3 weeks of training including 1 week of online and 2 weeks in camp.

It gives them practical help to get a job with various subjects for improvement of basic competence like job search strategy, analysis on companies and roles, how to introduce themselves, interview practices. Also, it gives team tasks to adopt the method of Design Thinking and Working Backward so that they can resolve regional challenges. 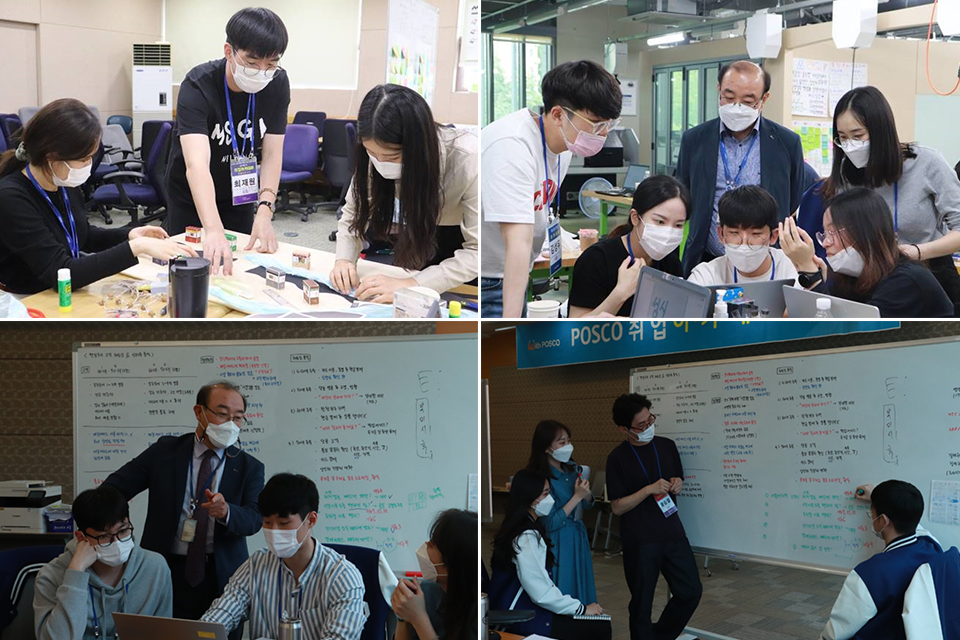 ▲ Students who are in a task that requires Design Thinking.

B. Youth AI• BigData Academy
In purpose of nurture professionals who will stand in front of the Fourth Industrial Revolution, the practical education to build competency – logic, utilization, and problem-solving tasks of AI•Big Data – will be provided. The practical education is mainly focused on graduates of universities who want to start a business or get hired in the IT area. 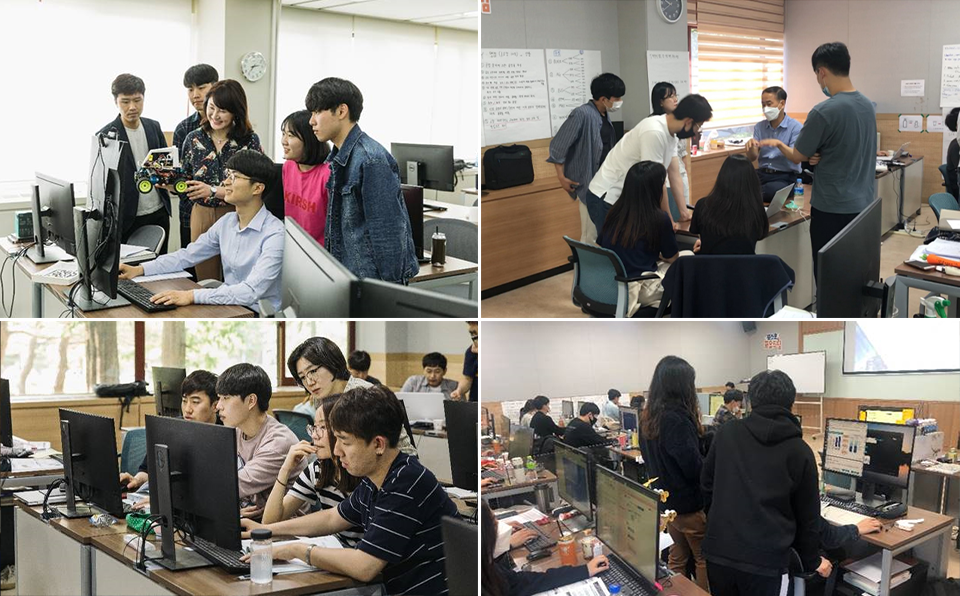 The 3-month education will be given to university graduates or future graduates, a total of 200 people yearly, 50 people each by 4 sessions. The education will follow curriculums including basics of machine learning, how to analyze Big Data and use of AI technology, with principles of AI•Big Data and its use method, one problem-solving task which can happen in their future workplace.

It has a training of 2 weeks online, 10 weeks in Camp. Not only trainers will be not charged for every expense like education and accommodation, but also be paid for training. Every graduate of the academy will be certified by name of the COE of POSCO Group University, and the president of POSTECH. The best students will be lucky to have a chance of 2 months of research internship or employment for the POSCO group. 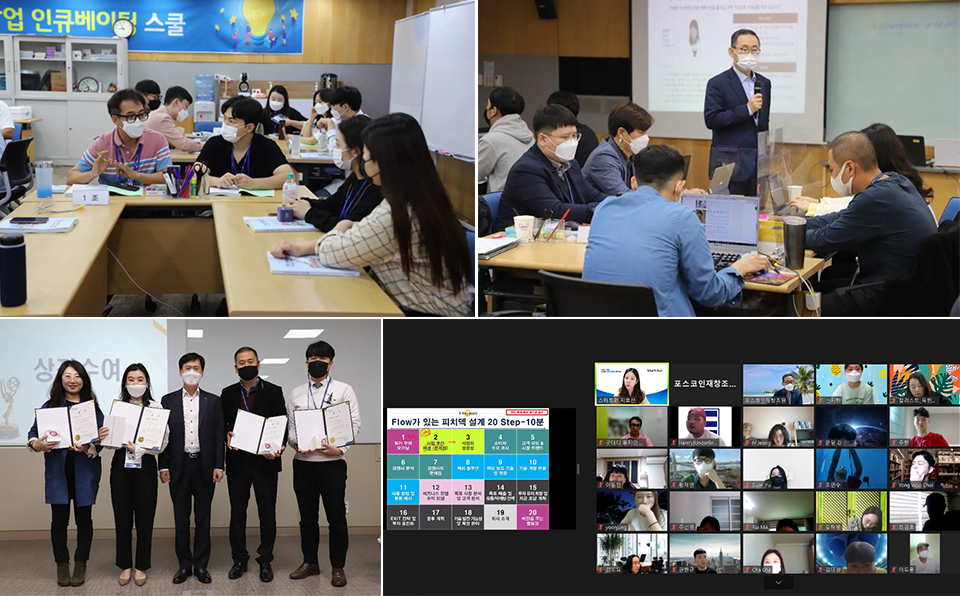 The program of on-the-job-training to start venture company helps 100 future owners who are in their 20 to 40, during 4 weeks- 2 weeks via online, 2 weeks in Songdo camp of POSCO Group Education, with the practical subject in strengthening business plan, validating the business model and writing of the business plan.

The training module is to educate how to realize the business plan, verifying business, and finally get to know other business experiences and knowledge. The Design Thinking method with customer’s needs and feedback will shape their business plan. In the use of Planning the Entrepreneurial Venture architected by Kauffman FastTrac Foundation, the biggest Entrepreneurship Center in the U.S, students will verify their business and learn about the business experience and knowledge in the subject of intellectual property, venture company-related Act, marketing strategies, how to write business plans, and national policies for Support for the small and medium enterprise.

Not only training, but later, graduates will also get One-on-One coaching sessions for their business plan to prepare government support programs that promote their business. Another benefit is the company’s accelerating session by POSCO’s IMP venture team to introduce professionals, VC investment. Also, POSCO’s talk concert about related to ventures will build a relationship between graduates, so graduates can share information to encourage each other for their goals. 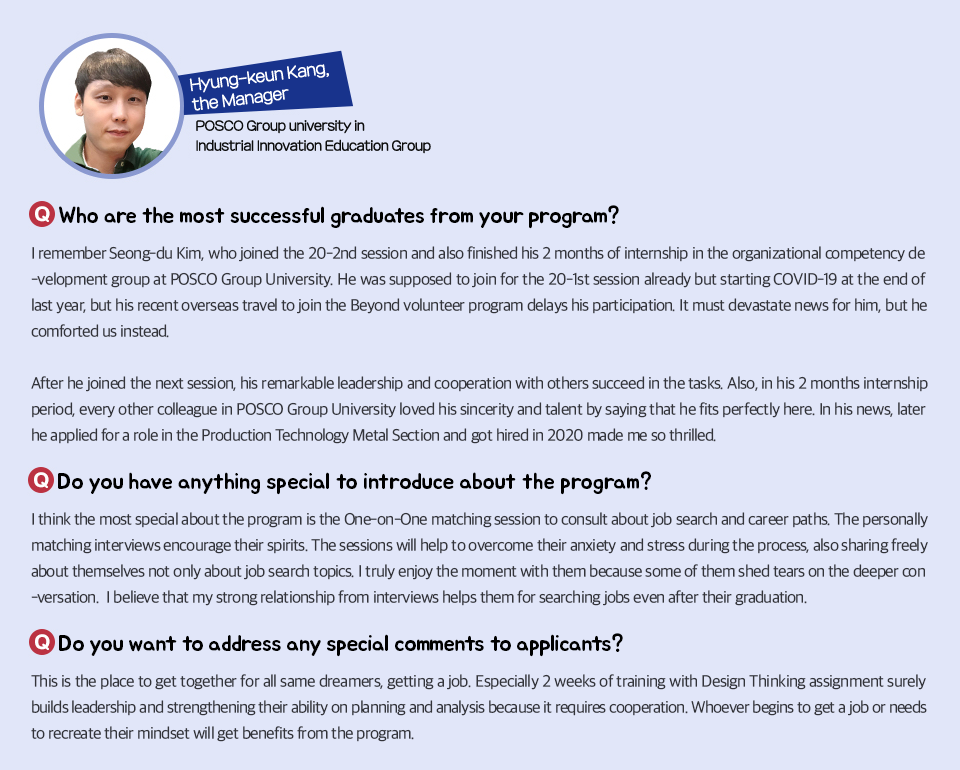 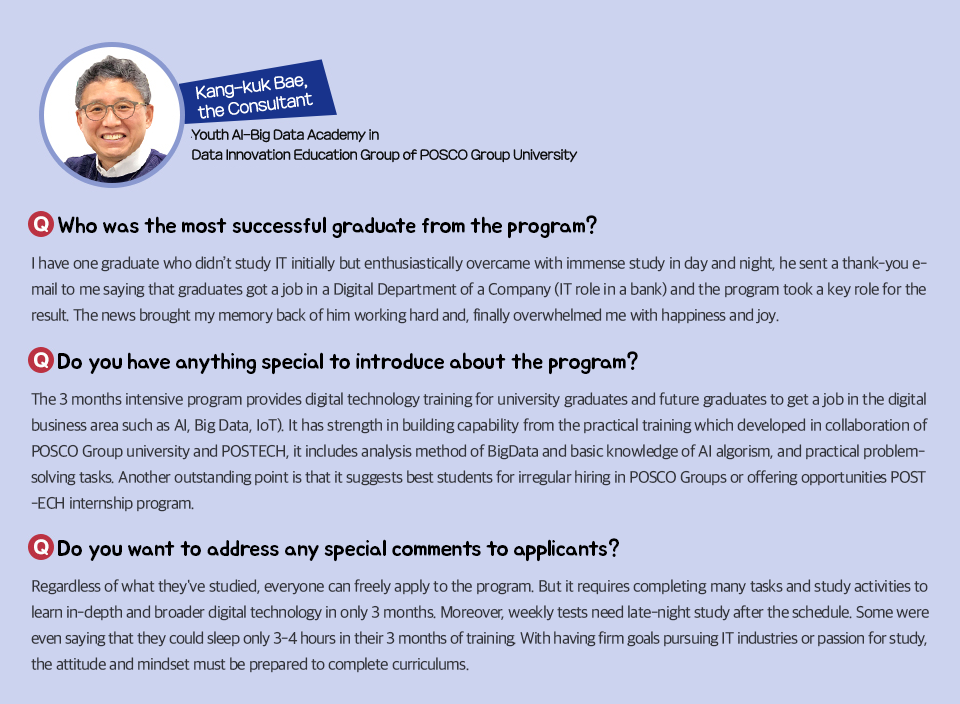 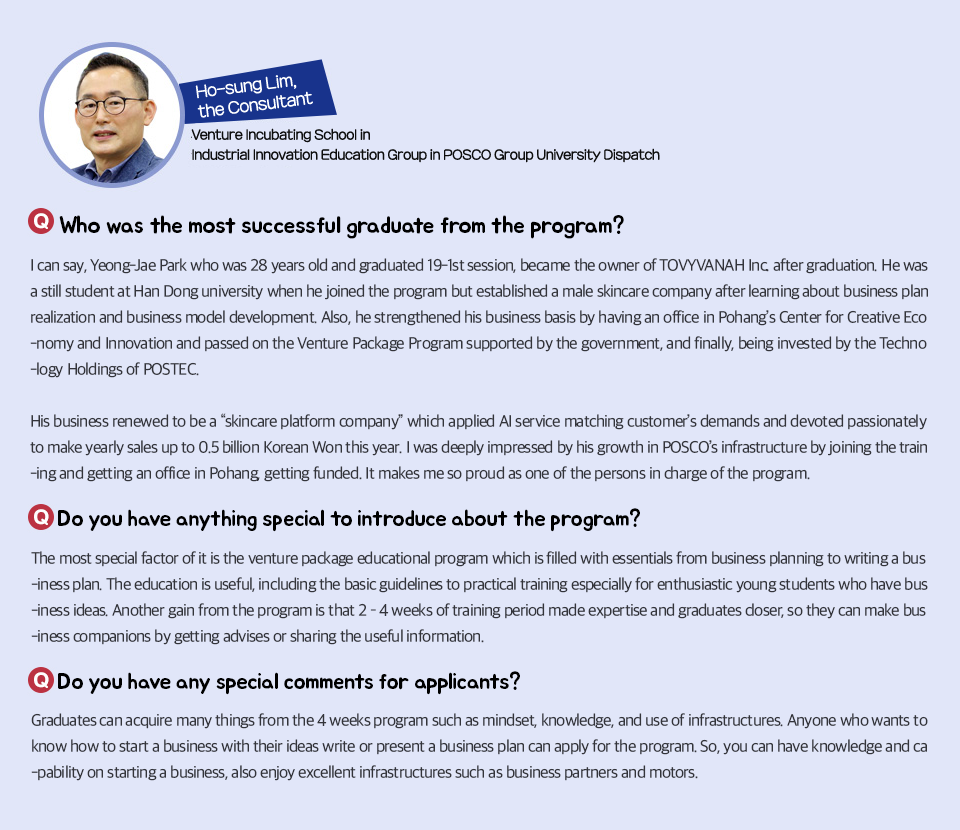 POSCO, imagining new lives in support of new youth for their dream, asks generous attention for their effort to keep harmonization and co-existence.