CEO Chung Joon-yang Awarded with AIST Steelmaker of the Year

POSCO’s Chief Executive Officer and Chairman Chung Joon-yang was awarded ‘Steelmaker of the Year,’ the most privileged prize for the industry. The awarding ceremony was held at AISTech 2013, an international steelmakers’ conference hosted by the Association for Iron & Steel Technology (AIST), in Pittsburgh, US. 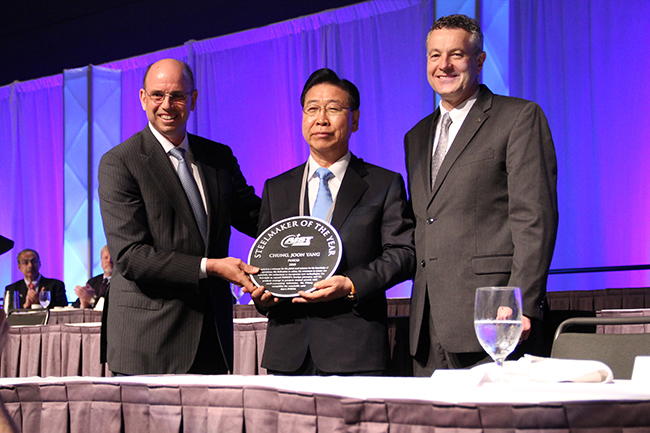 AIST is one of the top academic research organizations with highly appreciated reputation around the globe. AIST said CEO Chung was recognized as a visionary for the global steel industry for his knowledge of steel operations, dedication to safety, awareness to secure raw materials, enthusiasm to incorporate new technologies, foresight to expand POSCO’s foreign presence, and prudent strategy to promote mutual growth with steel-consuming industries.

In the ceremony joined by John Surman, CEO of U.S. Steel, and other major steelmakers, Chung accepted the honor and praised AIST’s diverse programs for the past 20 years, contributing to development and promotion of steelmaking technologies. He addressed that POSCO is putting all its efforts for developing cutting edge technologies to overcome rises in raw material prices, climate change and lack of energy resources. POSCO is also making a great deal of investments in R&D for environment-friendly and economic steel production, he added. 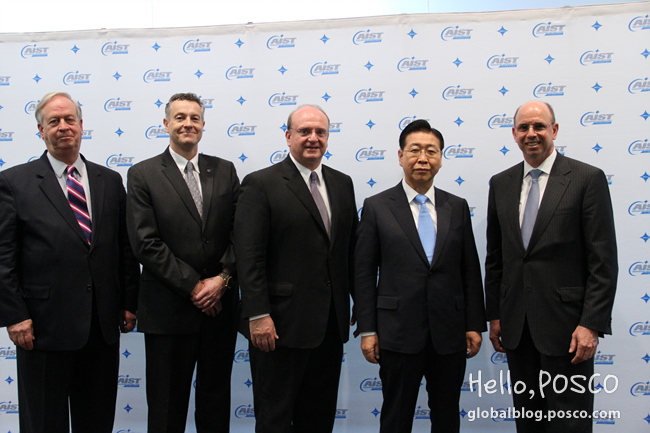 At the press conference after the awarding ceremony, Iron & Steel Technology, Steel Times International, Steel & Metallurgy, Industrial Info Resources, Platts, American Metal Market and other international steel and industry media packed the conference room to hear what the CEO was to share.

For the media session, CEO Chung introduced POSIT (POSCO Innovative Steelmaking Technology), a new technology for securing POSCO’s future competence, and explained about the backdrop of POSCO’s competitiveness. He also illustrated Smart Workplace System and how it was affiliated with the creative production efficiency of POSCO. The firm’s POSCO-Scholarship was also presented as well in order to show the case studies of finding and cultivating highly talented personnel.

For students and newcomers in the steelmaking industry, the CEO advised them to have a dream, a vision and an active passion in their journey towards the bright future. In doing so, Chung said, anyone can become a CEO and a winner with the spirit to overcome hardships and difficulties with optimism in mind and ownership of their own tasks.