Impact of Life Cycle Emissions: Lightweighting with AHSS vs. Aluminum

What are the major findings of the study and what implications do they have for the steel industry? Find out at POSCO Newsroom. 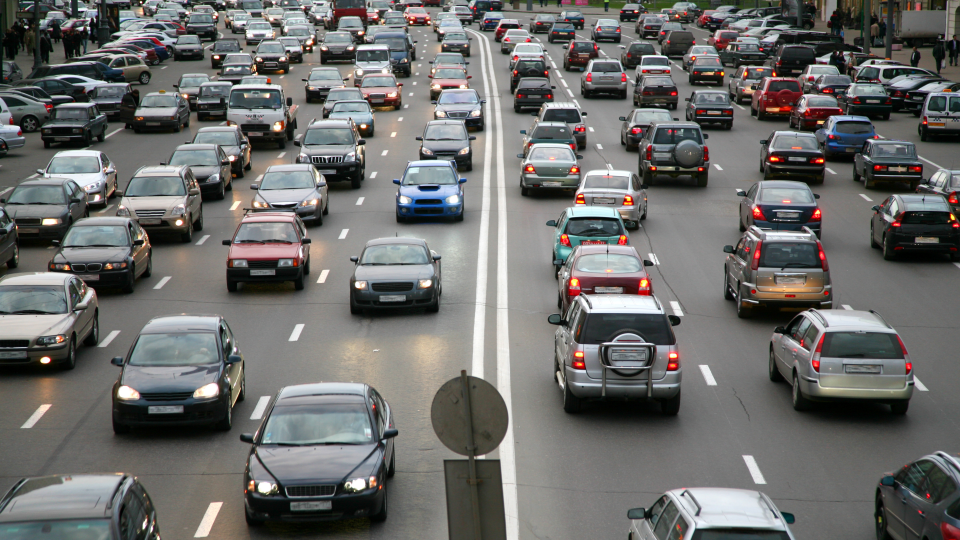 In tandem with global efforts to curb greenhouse gas emissions, automakers and the steel industry have worked collaboratively to help with vehicle lightweighting while achieving the same high vehicle performance. Lightweighting with steel is possible because of new advanced high-strength steel (AHSS) grades replacing lower strength grades. Clearly, AHSS reduces the overall weight of the vehicles and boosts fuel efficiency, but what about its environmental impacts? Does AHSS aggravate or reduce the emissions of greenhouse gases?

The following five body structural materials were compared to access their lightweighting potential against GHG emissions.

▲ Material production GHG emissions for common body structure and closure materials accounting for estimated part mass reduction during the material production: 1 kg of mild steel potentially discharges 1.9 kg of GHG into the air – and a common body structure weighs about 100 kg, which means it will potentially release 190 kg of GHG into the atmosphere (Source: SRI)

For every 1kg of AHSS produced, it releases 1.9 kg of GHG into the atmosphere – however, its lightweighting capacity brings down the total amount of GHG released into the air. What about aluminum? The amount of GHG it produces per kg is much too high to benefit from its superb lightweighting capacity, raising the question of whether replacing steel is the best answer for the environment.

Based on the above comparison, it seems lightweighting with AHSS has the lowest GHG emissions. To fully evaluate this hypothesis, SRI conducted a comprehensive study to assess the total environmental impact of vehicles lightweighted with AHSS and aluminum. The study assesses the GHG emissions and energy consumption associated with the entire life cycle of a vehicle; comprising the vehicle production phase (including materials production), use (driving) phase, and end-of-life phase.

These baseline vehicles were then each redesigned separately with aluminum and AHSS to reduce the overall weight while achieving the same general performance. Life cycle GHG emissions total and by individual phase were determined for each vehicle. One example of the model outputs is shown in Figure 2 for the SUV. 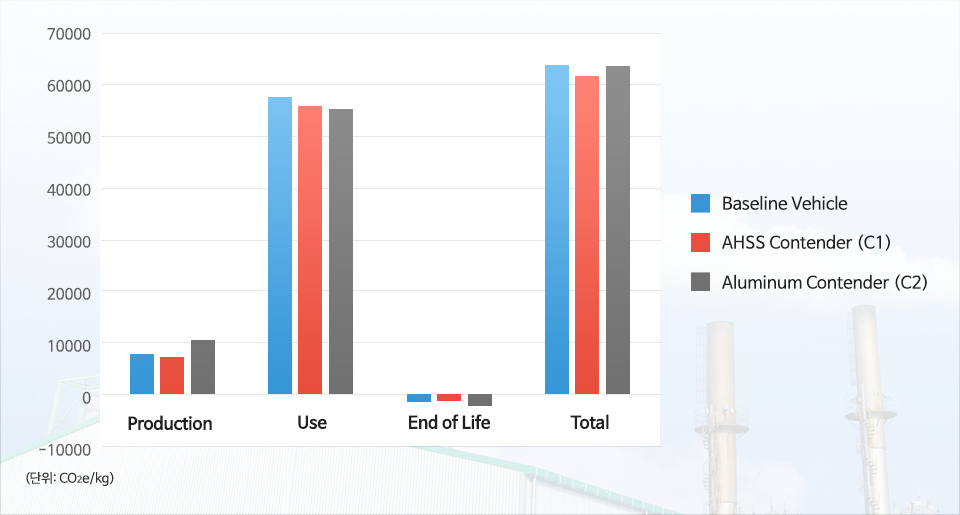 As expected, the materials production phase showed lightweighting with AHSS has the lowest GHG emissions. In the use phase with all else equivalent on a vehicle, the aluminum contender vehicle shows slightly lower emissions. Finally, in the end-of-life, credits are given to all materials because metals are melted again and put back into use, again aluminum is given a larger credit because it is so energy intensive to produce the primary metal. In total, however, the large increase in the production emissions for aluminum in the first phase of a vehicle’s life is often never fully recovered at the end of life.

The details of the study’s methodology, assumptions, results, and multiple sensitivity and uncertainty analyses can be found in the full report, but the key findings and basic conclusions were:

(2) The use of aluminum instead of AHSS to lightweight the vehicle body structure and closures resulted in a significant increase in materials production GHG emissions and energy consumption for every scenario. These emissions occur at the start of (and remain in the atmosphere throughout) the vehicle life cycle.

(3) In many cases, the dramatic increase in materials production emissions for vehicles lightweighted with aluminum instead of AHSS is never offset by emissions reduction benefits during the vehicles useful lifetime. 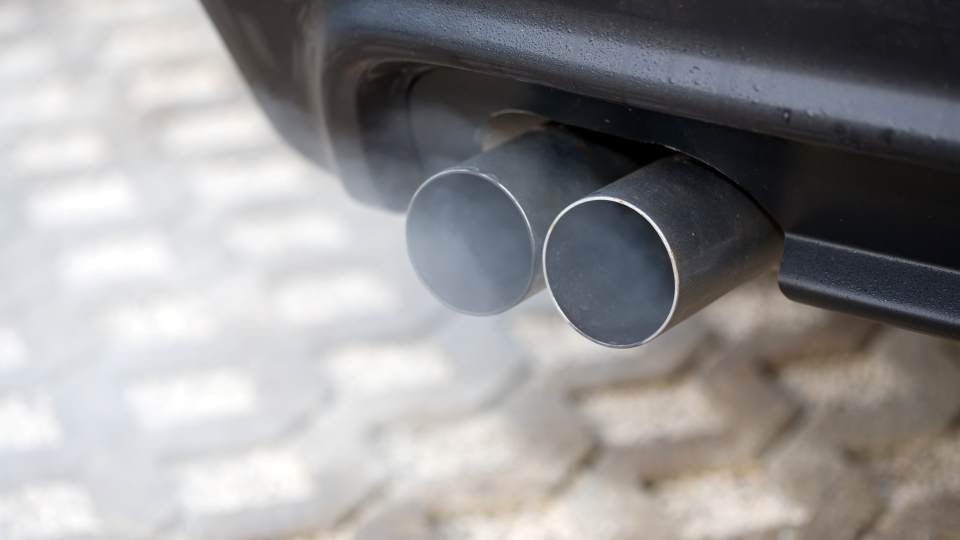 So what do the results of this study mean in the real world? What does a kg of GHG emissions implicate? The model used for the SRI study calculates the difference in emissions per vehicle. When this number is multiplied by the number of vehicles produced in a given year of the vehicle type, the amount of GHG emissions becomes significant and representative of the real impact on the environment each year.

Lightweighting the five 2016 vehicle fleets with AHSS vs. aluminum would result in 12 million tons lower GHG emissions over their lifetime. This is equivalent to the GHGs emitted from consuming 1.2 billion gallons of gasoline.

Other equivalents for 12 million tons of  greenhouse gas include:

<Equivalents for 12 Million Tons of GHG>

l “Steel Offers the Best Solution for the Environment.”

What does this mean for the environment? Compared to other materials, steel has the lowest greenhouse gas emissions making it the environmentally sound choice for automakers.

To meet the needs of today’s auto industry and its increasingly strict demands, POSCO has been working tirelessly to develop ideal materials. POSCO GIGA STEEL, the advanced high-strength steel (AHSS) produced by POSCO is one such effort. The name came from its tensile strength of over 1,000 (Mpa), an equivalent of one gigapascal. Because POSCO GIGA STEEL boasts high strength, it is possible to use less of it ultimately making it lighter than car frames made of general steel or aluminum. When compared to aluminum, GIGA STEEL is three times stronger yet three times lighter, costing 3.5 times less to produce and 2.1 times less to manufacture. When looking at the entire lifecycle of a vehicle made with steel, POSCO GIGA STEEL emits 10% lower CO2 emissions.

“As driving emissions decrease to meet regulations, production emissions become an even more significant component of a vehicle’s full environmental footprint,” said Jody Hall, vice president, automotive market, Steel Market Development Institute. “If material production phase emissions continue to be overlooked, negative effects on the environment will begin before the vehicle is ever driven. Steel offers the best solution for the environment, the best performance and cost-effective solution for automakers, and ultimately the best value for consumers.”

The complete report of SRI’s “Life Cycle Greenhouse Gas and Energy Study of Automotive Lightweighting,” is available through an email request on the SRI website. 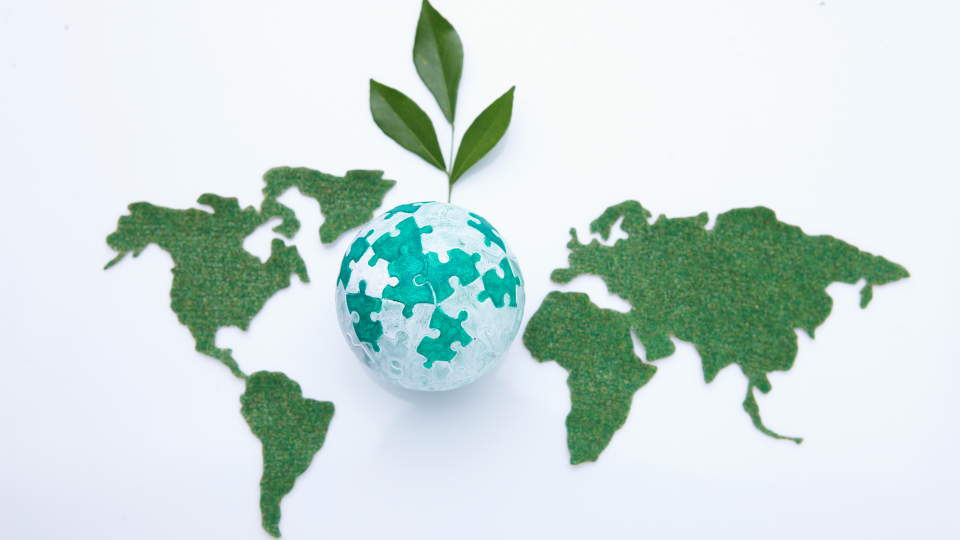 *Following completion, the study underwent independent critical review by a panel of automotive life cycle assessment experts. The panel verified the study confirms to the applicable ISO (International Organization for Standardization) standards for comparative LCAs, thus giving it a third party validation as a scientifically based study.