Every year, POSCO Youth Beyond volunteers come to Vietnam with a hope to turn dreams of underprivileged families into a reality. This year the dream was realized through decent shelters and warm actions from Vietnam POSCO Village project. 107 Korean students and 20 Vietnamese volunteers mustering at Ba Ria-Vung Tau province engaged in various activities such as building love houses, exchanging culture and music performance with students of Truong Cong Dinh Secondary School and Youth Union of Vung Tau City. More details of the project and interview of the participants begin from now!

All about the ‘Vietnam POSCO Village’

The Vietnam POSCO Village project, aiming to provide 85 houses for underprivileged families located at Tan Hoa Commune, Tan Thanh District, Ba Ria-Vung Tau province, was sponsored by POSCO 1% Foundation. Total 18 months, the process of the project is divided into three phases. Initially, phase 1 (from September 2014 to March 2015) will provide 26 low-income households with safe and adequate housing with water and sanitation facilities. Phase 2 (from June 2015 to September 2015) will support another 19 households and phase 3 will be other 40 houses (from November 2015 to March 2016). The aims of Vietnam POSCO Village are to support the underprivileged people of the local community and to improve their living conditions for a better life. Also, the project aims that employees of POSCO’s local subsidiaries to train occupations and farming skills to help them build a happy village.

Bricks of Sweats, Tears and Love for the Village

The main activity of the POSCO Beyond volunteers at this phase is to complete 11 houses among 85 houses of the Vietnam POSCO Village project. Hence, the poor households have decent place as they welcome the upcoming happy Lunar New Year holiday of 2015. The volunteers start their day by preparing personal facilities for the construction work such as helmets, gloves, safety shoes, and protection glasses. It is for a better protection at the build because the climate condition is extremely hot during the daytime. “I get up early in the morning to have everything prepared, make sure that I can have ensured safety, power and willing for another hard day waiting for me”, said Chanyang-go, Beyond 8th. 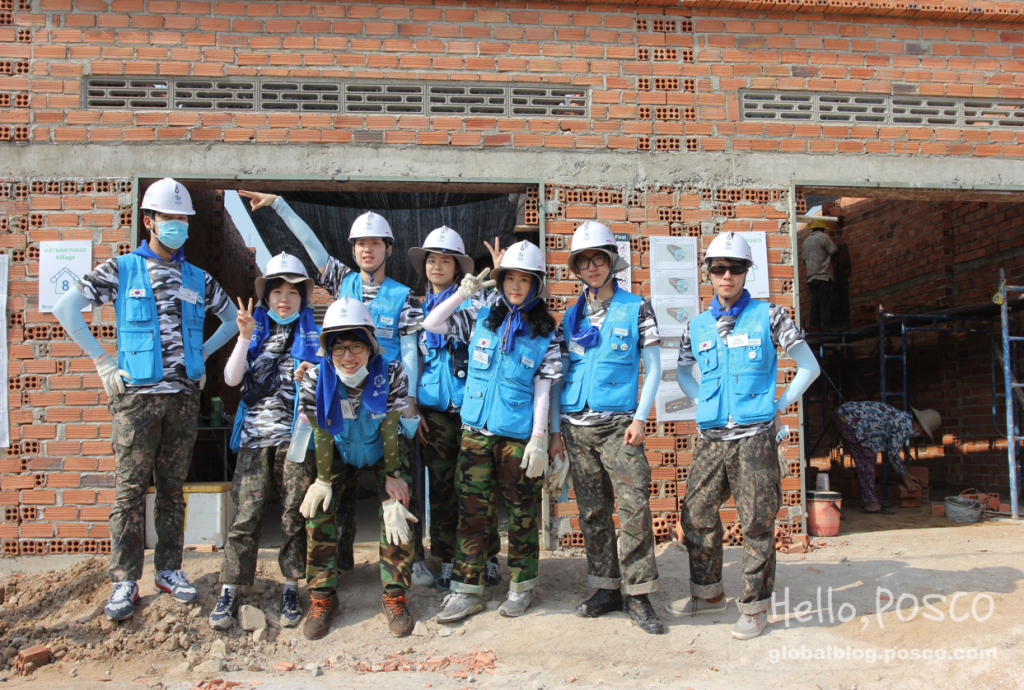 As the volunteers get off the buses at the construction site, they stand in 10 lines and move to the houses where the materials and tools are available. There are various construction activities done by the volunteers and supported by builders of Habitat Vietnam and workers of POSCO-Vietnam. The activities are divided by each task, so the building work is not so burdensome for the volunteers; some volunteers are mixing cements, some are bringing and lifting bricks and mortars. Some are leveling the ground and some are digging holes to make toilets. All of them have a hope in mind that the houses will be completed on time. “These works make me feel stronger and stronger day by day. You know there is nothing as hard as this for students to do at schools. Lots of sweats are poured while working but when I see the smiles on the home owners, every fatigues disappeas”, said Pham Thi Tuyet Trinh, Beyond Vietnam.

The work is usually finished around the time of sunset; the volunteers clean up surroundings of the site and arrange tools in order for the next day’s work.

What do the volunteers do during the weekend? The weekend days of Jan 31st and Feb 1st was waited by everybody. Especially, people waited long for the activities after a hard week of working at the build. 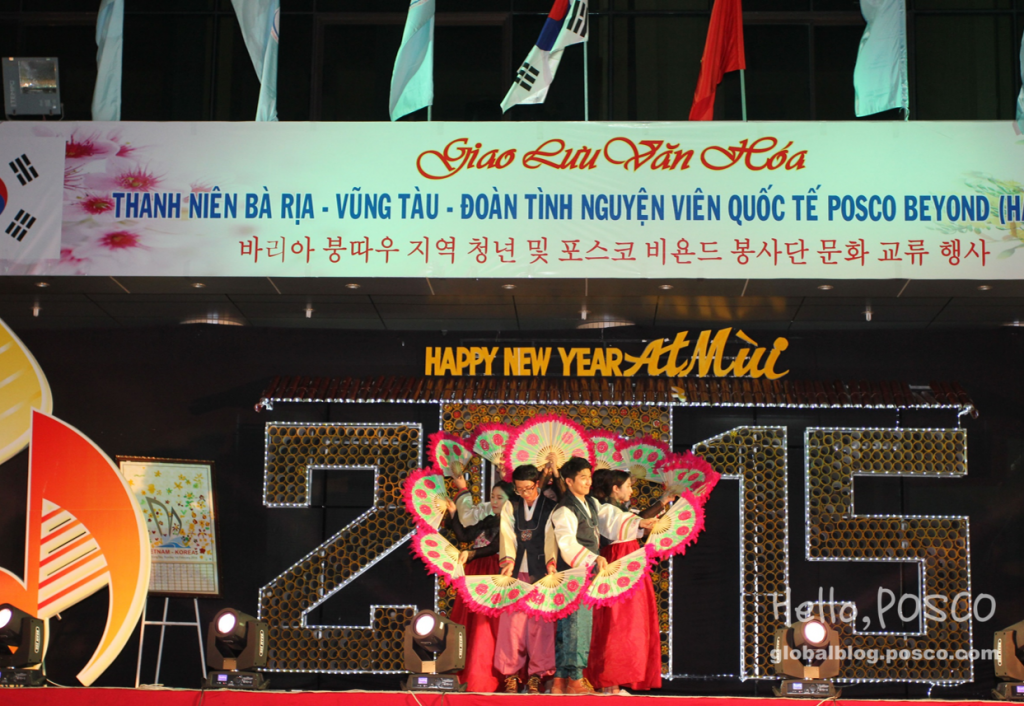 On Saturday morning, the volunteers visited the Secondary School of Truong Cong Dinh, Chau Pha Commune, Tan Thanh District, bringing the warm welcomes and exciting atmosphere to the school. “This is the first time I meet Koreans in real life. They are so beautiful and friendly. I love the fashion styles they are wearing today. I am so excited about this”, said student Nguyen Lan Anh, 6 grade.

There was a wide range of performances done by the volunteers and students of this school. The volunteers performed Korean traditional dances and catwalk, wearing the traditional dress called ‘Hanbuk’. They also taught martial arts for the students at the event. Moreover, boys and girls of the school performed Vietnamese traditional songs and dances, bringing colors to the stage. “It’s a really nice performance; I think they prepared it very well for this culture exchange. The students are small and young but they sing and dance beautifully”, said Ms. Park Yu Jung, Beyond 8th.

Sunday’s cultural exchange between 100 POSCO Beyond Volunteers and 70 members of the Youth Union of Ba Ria-Vung Tau province took place at an outside stage of the Culture House of Youth, Vung Tau City.  The cultural exchange program included various activities such as writing calligraphy, drawing portraits, fashion shows of Hanbok of Korea and Ao dai (long dress) of Vietnam, music and dance performances, bonfire and more. The Youth Union of Ba Ria-Vung Tau province organized this cultural exchange in order to introduce traditional activities and cultural custom of Vietnam to the volunteers. Also, it was organized to create comprehensive relationships, understand the culture and people between the two nations. “Through the cultural exchange program today, I can understand more about Korean traditions and styles. We use English and body language to exchange information for more understandings and we also write emails for regular exchange relationships in the future”, said Ms. Nguyen Huong Thao, a youth member of Ba Ria-Vung Tau.

On February 10th, teachers and children welcomed 10 POSCO family volunteers with enthusiastic faces to meet the sponsors, to play games and to receive gifts. It took some minutes for the volunteers to make acquaintance and introductions. After that, the volunteers brought gifts to the children. Some received teddy bears, sketch books, toothbrushes and some children were given daily necessaries for life. The volunteers also offered foods and oil to the center for better nutrition of the children. “Today, I received a beautiful teddy bear. I am very happy now for the gifts”, said Lan Huong, 6.

The Volunteers also cleaned doors and windows for better views of the center. Moreover, they hosted some intriguing games for the children like jumping ropes, drawing faces, playing soccer, and many other fun programs. “I wished to have a ball to play with friends for long, and to become a football player in the future. Today, I received a ball and learned how to play from a volunteer. I’ll practice every day. Thank you so much”, said Hoang Nam, 9. 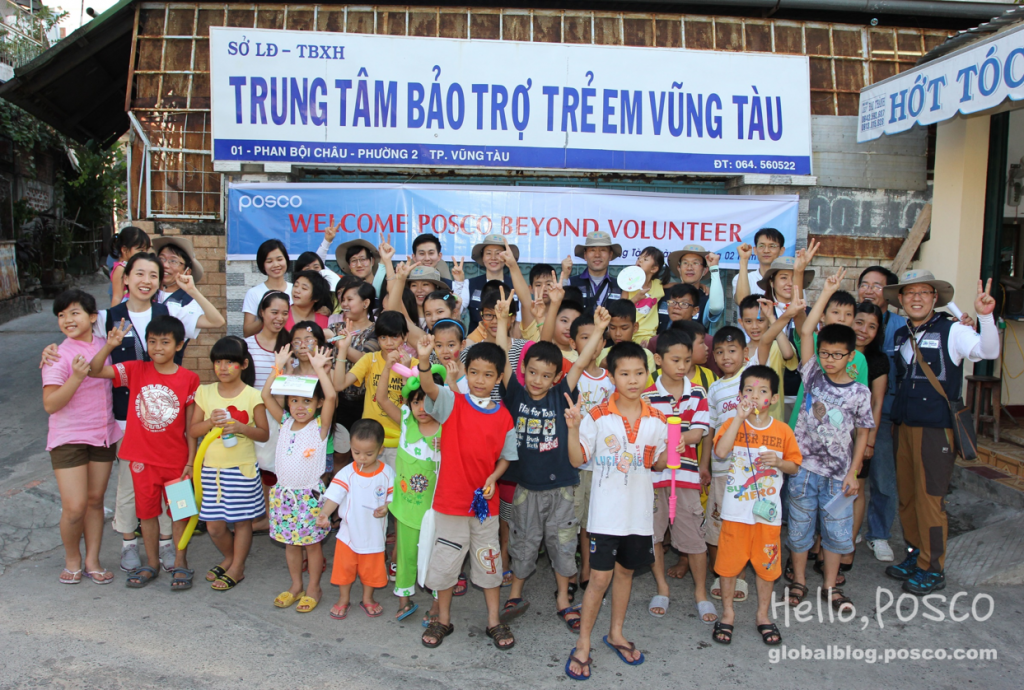 The Centre for Social Protection of Children in Vung Tau City is taking care of about 130 handicapped and orphaned children. Babies born to impoverished mothers, sometimes illegitimately or in socially precarious situations, are seldom abandoned at the hospital or later at the center. Some of the babies received at the center suffer from a range of congenital or post-natal disabilities including hydrocephaly, blindness, deafness, or physical disabilities that will prevent or hinder their ability to stand and walk unaided. Moreover, for many families that are unable to support their children, it is common to put children to work instead of attending school. Although the visit of POSCO family volunteers was short, it brought bright joy to the children at the center.

Dedication Ceremony for the First Houses

In the morning of February 5th, POSCO-Vietnam, Habitat Vietnam and local authorities joined to organize a dedication ceremony of 11 houses. Held at the construction site, the ceremony was attended by local leaders, POSCO and Habitat’s representatives, 100 POSCO Beyond volunteers, 20 volunteers of Beyond Vietnam, 10 POSCO Family volunteers and the homeowners. 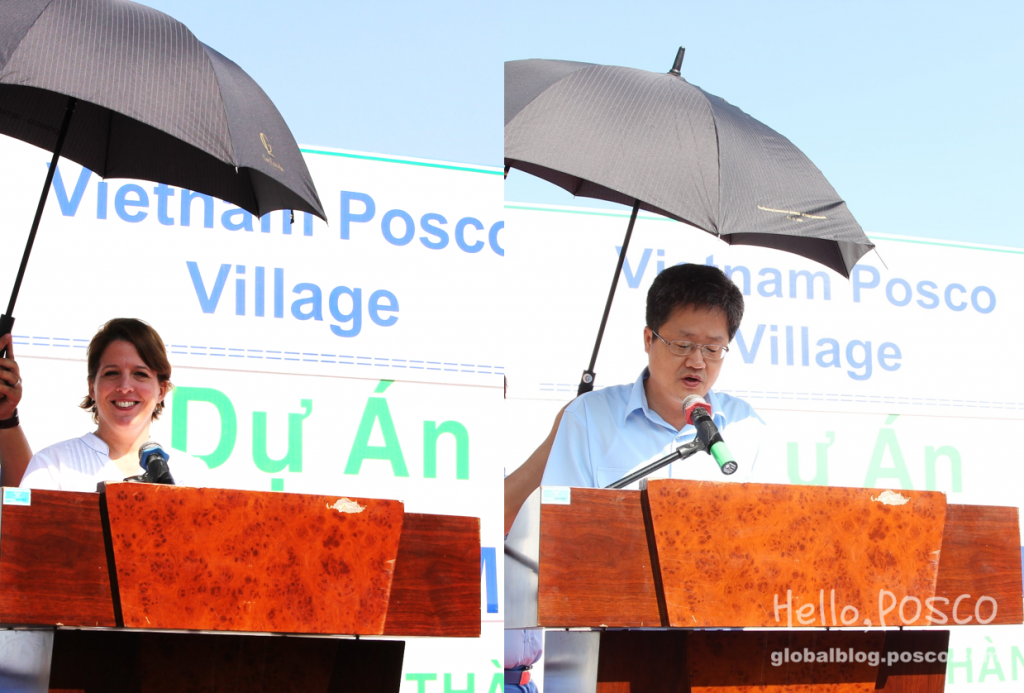 “It is indeed my great pleasure to make a few closing remarks for the POSCO Beyond Build 2015. One week ago, all we saw were only the foundation and four walls. Now, look at what we’ve done! 11 beautiful almost-finished houses and I’m proud to say that we made it!, said Ms. Kelly, General Manager of Habitat Vietnam.

“It’s very meaningful for us to be here to share love and tears when we join together for the volunteer activities to help the underprivileged people. I believe that it will become a solid foundation for a better close-knit relationship between Korea and Vietnam in the future”, said Mr. Yun Yang Su, General Director of POSCO Vietnam.

Unforgettable Moments about POSCO Beyond Volunteers 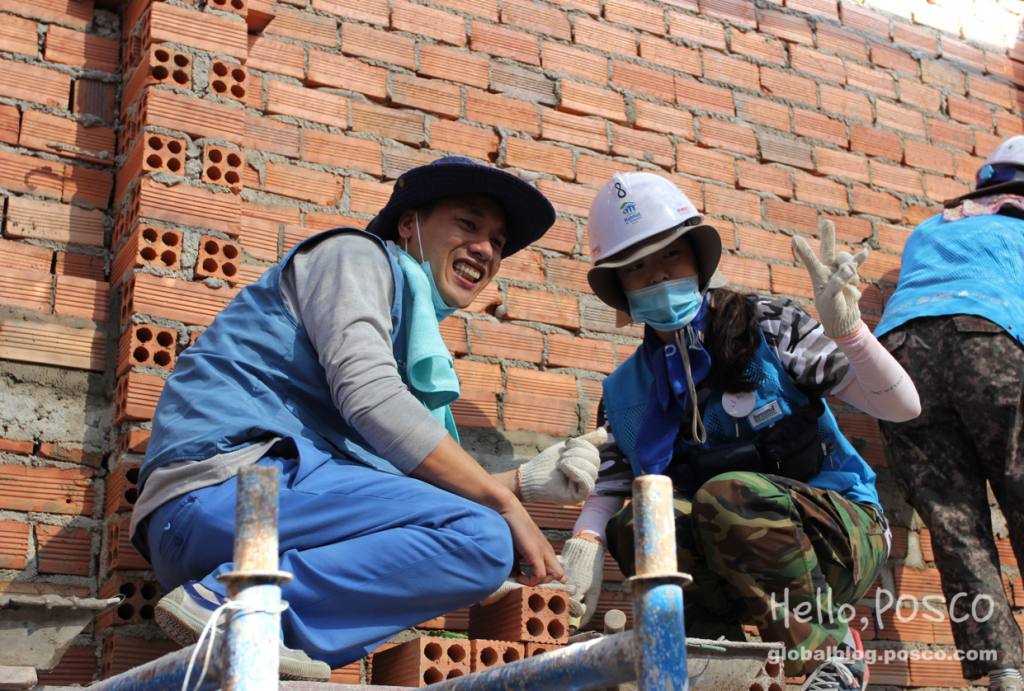 “I was excited when I heard that POSCO Beyond Volunteers are coming to do social activities in Ba Ria-Vung Tau province. So I registered to join the volunteer activity as soon as possible. This is the first time I’ve participated in a volunteer activity. For me, volunteer activities to help the poor for a better living conditions make me feel happy because I can share the burden of them together.” 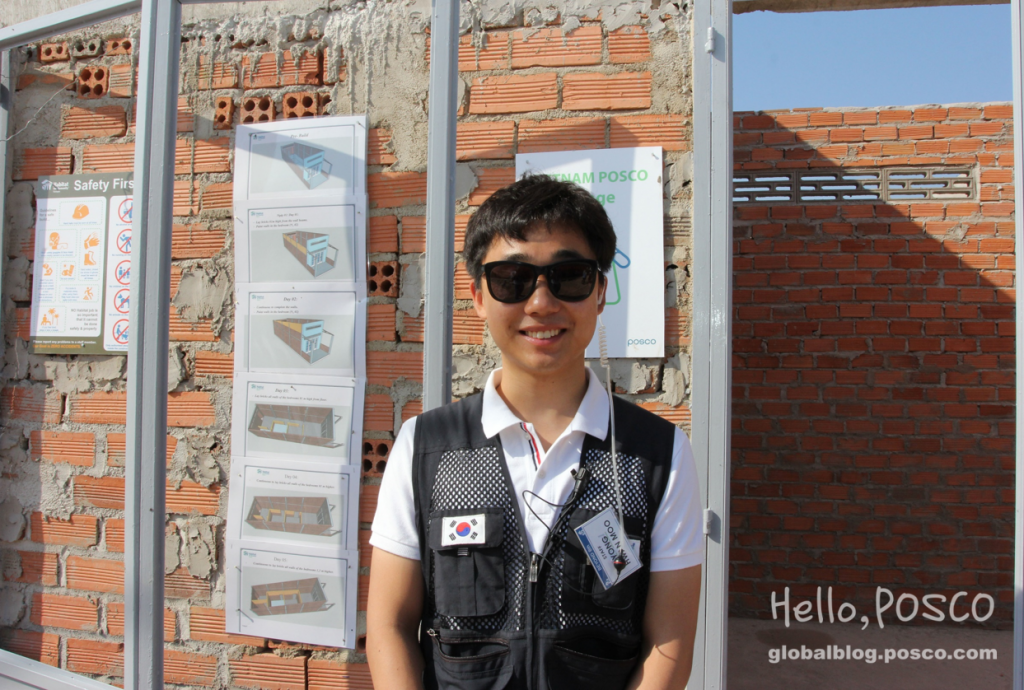 “There were a lot of laughs when I came to the building site and working together with the students of POSCO Beyond. They worked very hard in a rapid pace. I think that they are more than just students. They are almost like professional builders. The students are friendly, vivacious and helpful; therefore, I made lots of friends here. The volunteer activities are meaningful moments that I will never forget about.” 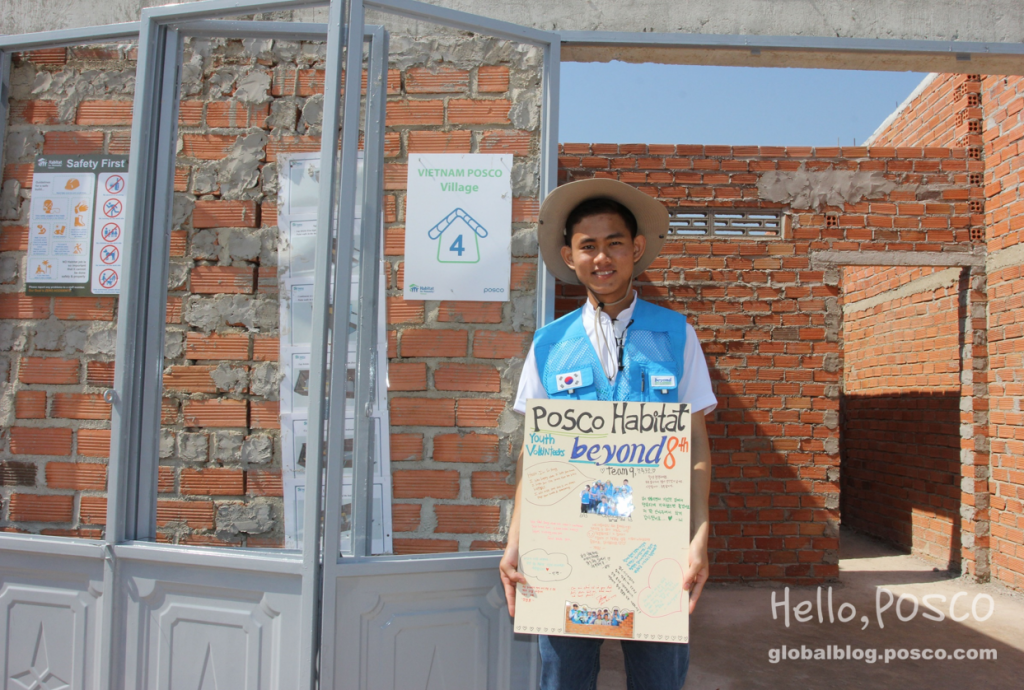 “This is the 3rd POSCO Beyond that I’ve ever joined. It’s so great to me. I know that the Vietnam POSCO Village project is sponsored by the POSCO 1% Foundation (operating with one percent deduction from the wage of POSCO’s employees). This is a magnanimously deep and compassionate action of POSCO that no companies can do it in the world. After the village is completed, the underprivileged people will have decent shelters which are the foundations for them to do their business to raise their children.”

If you are interested in more detailed thoughts and experiences of the volunteers, read the next post of a university student who participated at the project.