5 Super Steel Stadiums Around the World

Located in Glendale Arizona in America, University of Phoenix Stadium is a multi-purpose facility with unique features of retractable steel roof and field. The 63,400-seat stadium, which is expandable to 72,200, have the NFL’s Arizona Cardinals and Annual VIZIO Fiesta Bowl as the primary tenants. As a marvel of design, engineering, and technology, the stadium was voted as one of the top ten sports facilities in the world by Business Week in 2006.

Here are some facts that even football enthusiasts might have not known before. With a solid mission for the environment, University of Phoenix Stadium is a member of the United States Green Building Council (USGBC). When tailgating, a big part of game day experience, guests are given complimentary recyclable bags for disposal of recyclable materials. While the 10% of stadium’s seating is made from recycled plastic, the venue uses “Green” products such as hand soap, all cleaning solutions, microfiber mops and rags to preserve water and the environment.

Another interesting fact about the stadium is that the stadium’s field is wheeled in and out on 546 steel wheels that ride along 13 parallel steel rails, traveling 741 feet. It is almost unimaginable to guess how much steel was used for the construction!

Allianz Arena, Europe’s contemporary stadium, with the size of more than 70,000 spectators, is the third home for FC Bayern Munich. Its extraordinary facade, covered with 2,760 diamond-shaped cushions, constantly amazes visitors. The stadium is always filled with fans every season because of the tenant team’s star players and other facilities such as outstanding catering and parking space at the venue.

As a special feature, Allianz Arena is lit in red when the host team is Bayern Munich, in blue when it is 1860 Munich, and in white when the German national team hosts the football match.

For the construction of Allianz Arena, approximately 22,000 tons of steel was used. The retractable roof is where massive amount of the steel was applied to. Overall, the stadium was warmly welcomed by the Munich community and more than 60 percent considered Allianz Arena as a favorable construction project. According to “Cicero”, political journal, the stadium became Germany’s favorite sports location.

Located in Aveiro, Portugal, Estádio Municipal de Aveiro Stadium was designed for UEFA Euro 2004 tournament as the fifth-largest football ground of the country. A home ground for Sport Clube Beira-Mar of the Segunda Liga, the stadium is a venue for various football matches including the Portugal national team games.

Estádio Municipal de Aveiro Stadium is known for its dynamic design which is a combination of simple shapes and lively colors. Designed by Tomás Taveira, the stadium benefits from its cheerful colors as the intense tonalities bring out the celebration atmosphere of sporting events. Examples of the polychromic feature are red steel pylons, sky-blue edges of the roof and seating areas of rainbow shades. Having a capacity for 32,830 spectators and the special design features, the stadium is visually appealing both empty and full of people.

One of the America’s most classic stadium, Michigan Stadium, also known as the Big House, is a symbolic icon of University of Michigan-Ann Arbor. Opened in 1927, which was the golden age of college football, the stadium was modeled after the Yale Bowl and was constructed with 440 tons of reinforcing steel and 31,000 square feet of wire mesh. Started with an initial capacity of 84,401, the venue currently upholds up to 109,901 spectators after a major renovation in 2010. Although the stadium is not known for extravagant colors or sleek, modern design, the stadium embodies its own meaning as one of the oldest and largest college football arenas in America. 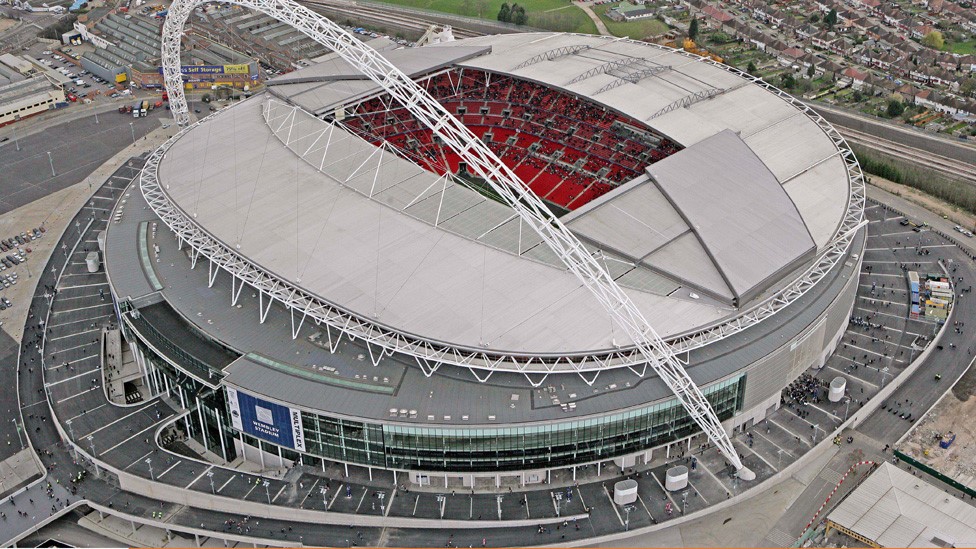 Sponsored by EE, Wembley Stadium is a multiplex football stadium in Wembley Park, London, United Kingdom. Wembley Stadium is known for hosting major football matches, such as FA Cup Finals and home ground matches for England National Football Team. Wembley Stadium opened in 2007 after demolishing the previous Wembley Stadium. The stadium has a retractable roof, just as many other modern stadiums, and 134m-high Wembley Arch over the venue. .

Wembley Stadium is one of UEFA category 4 stadiums. Category 4 is the highest of the category. With 90,000 in capacity, Wembley Stadium is the second largest stadium in Europe and largest in the United Kingdom. Considering the immense size of the structure, which even contains 2,618 toilets, about 23,000 tons of steel were used for its renovation. This stadium is currently owned by the Football Association where HRH the Duke of Cambridge (Prince William) being the current president.

As shown, today’s large venues, especially these amazing stadiums, are built on steel skeletons. As an essential material for the modern world, steel will continue to evolve into even more ambitious and innovative creatures in the future.