First held in 1979, the annual joint meeting of the Korea-Australia Business Council marked its 36th anniversary this year, providing an opportunity for industry leaders of both countries to discuss areas of interest, such as resources and infrastructure, as well as solutions for mutual development. This year’s event attracted special attention from political and financial leaders of both countries, as this was the first meeting since the Korea-Australia Free Trade Agreement (FTA) came into effect in December 2014.

During the meeting, both countries agreed to actively make use of the Korea-Australia FTA to encourage continued trade growth and expand both countries’ cooperation in new areas. The general meeting held on October 2 kicked off with the welcome speeches of Bonghyun Kim, Korean Ambassador to Australia, and Senator Richard Colbeck, Minister for Tourism and International Education of Australia. They were followed by presentations on mutual cooperation areas such as infrastructure, resources and finance.

In his opening address, Chairman Ohjoon Kwon noted, “Australia’s strategies for fostering service business and science technologies are in line with Korea’s creative economy.” He also suggested the realization of a creative economy is possible through the exchange of new technologies and cooperation in finance and construction, along with the assistance of the Asian Infrastructure Investment Bank (AIIB).

During the meeting, a special session was conducted to introduce Smart Farm, one of Korea’s creative economy pilot programs, to Australia, and a discussion was held on the development of an offshore plant, among other future cooperative businesses between the two countries. Finally, financial cooperative plans for both nations were explored in detail.

This year’s joint meeting was attended by over 60 interested parties from Korea, including Chairman Ohjoon Kwon; Hyunghwan Joo, Vice Minister of the Ministry of Strategy and Finance; and Seungchul Lee, Vice President of the Federation of Korean Industries. Additionally, 65 personnel from Australia including Chairman Mark Vaile; Mike Baird, Premier of NSW; and John Walker, Chairman of Macquarie Group in Korea, attended the meeting. 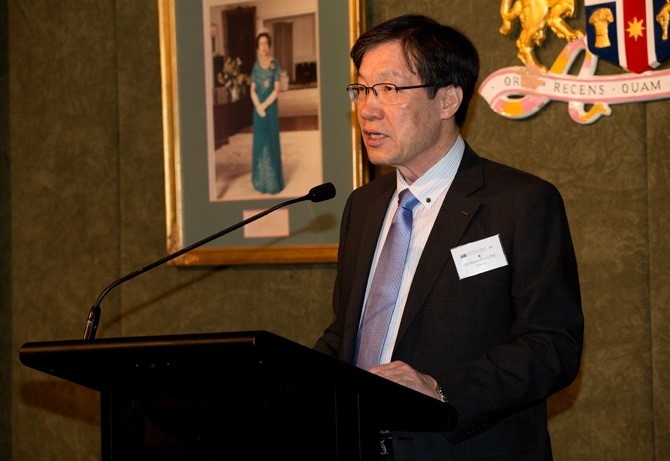