[You Know What?] POSCO Steel Bridging Places Around the Globe

One common problem famous cities around the world face would be ‘traffic.’ So most cities are busy building tunnels, bridges, and expanding highways to resolve this issue. Australia’s Melbourne is also known for its heavy traffic. According to INRIX, a US traffic information analyst, Melbourne ranked 17th among the world’s most congested cities in 2018. 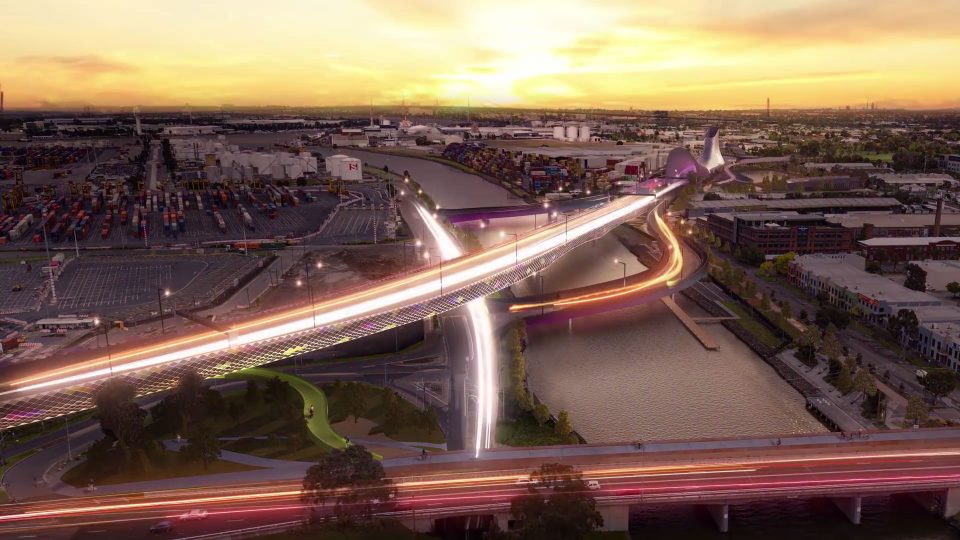 That’s why the WEST GATE TUNNEL project started. Previously, for a single day, 200,000 cars had to rely solely on the WEST GATE Bridge to enter the city center from Melbourne’s harbor. The new project is a large-scale infrastructure project that builds nine new bridges and one twin tunnel to solve this problem. It runs about 5 km from Melbourne to Docklands, with construction in progress beginning in 2018 and estimated to be completed by 2022.

Not many people would know that the company behind connecting the bridges of Australia is a Korean company from more than 8,000km away.

POSCO is one of the top three domestic companies in annual sales (FY2018). It is not only a Top Player in the domestic market but also a Global Player that exports about 45% of its total sales. POSCO provides all the steel plates for the nine bridges of the WEST GATE TUNNEL project. Of course, winning this project demanded intense work from POSCO’s marketing, production, quality, and research institutes.

First of all, POSCO presented an idea of applying steel products with higher quality and lower cost than the previously requested steel specifications the client. At the same time, POSCO took the lead in bidding with high specs steel that can’t be easily produced by competitors.

At the same time, Pohang Works entered into a “joint operation” to get the ACRS review done within a short time. On the day of the on-site evaluation, all relevant departments cooperated with a 24-hour response system.

Eventually, POSCO was chosen as the supplier of the entire steel plates for the bridges of the WEST GATE TUNNEL project. Steel supply began in July last year and ends in May this year. The WEST GATE TUNNEL project will be a solution to alleviate the troublesome traffic congestions in downtown Melbourne. In addition, almost nine hectares of new open space will be created, with over 14 km of new and upgraded walking and cycling paths. This project is aiming to improve the quality of life for Melbourne citizens — it isn’t just a tunnel and bridge construction project.

l The Longest Suspension Bridge in the World — ‘ALL POSCO STEEL’

The Çanakkale 1915 Bridge is being built in the city of Çanakkale, northwestern Turkey. It is expected to become the longest suspension bridge in the world with a total length of 3,563m and main span distance of 2,023m. In the past, people had to take a boat that came every 30 minutes or so to cross the strait. However, with the bridge completed, it is expected to be a 10-minute drive to reach the other side.

The construction will be finalized by 2023 to celebrate the 100th anniversary of the Republic of Turkey — However, the Turkish Parliament Chairman said it could be completed in 2022, one year ahead of the original plan! The scale for the construction is immense for a single project with a budget of 3 billion dollars, and 128,000 tonnes of steel products. It’s no wonder that leading companies around the globe worked hard to win the contract. 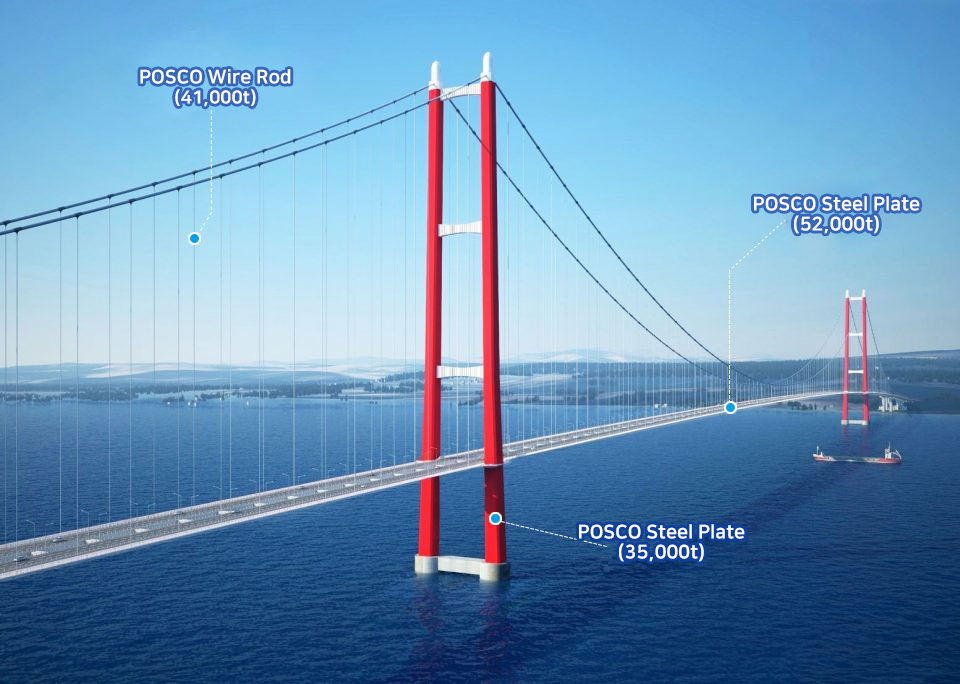 POSCO was the winner of the intense competition. POSCO succeeded in winning all orders for steel plates and wire rods for the bridge. POSCO’s marketing representative attributed the success to three factors — premium steel supply, solutions to better process steel, and service to ensure perfect quality from production to transportation and storage.

POSCO actively held solution briefing sessions for local contractors. The key to winning the project was to quickly dig in from the design stage, which was crucial in a “Design-Build” project. POSCO promised the production of wide-ranging materials to minimize local processing costs, welding solutions for steel plates over 100mm thick, and steel storage and inventory management services utilizing POSCO-Turkey Nilufer Processing Center (POSCO-TNPC), an automotive steel processing center in Turkey. Initially, POSCO received an order of 35,000 tons of steel plates for the bridge towers. This later on advanced to a contract of 52,000 tons of steel plates for the decks and 41,000 tons of wire rods — resulting in a build of an ‘All POSCO STEEL’ bridge with a total 128,000 tons of steel.

POSCO’s steel supply for the Çanakkale 1915 Bridge is now nearing its end. It will be finished by April this year. Since its start in 2018, the journey for the project lasted for nearly three years — including the preparation period. However, this is not the end since POSCO’s after-sales service will continue even after the steel supply is complete.

POSCO’s Sang-Il Lee of the Construction Steel Materials Marketing Office, who participated in this project said, “This was a large project that I would never have been able to handle alone. We could win this contract thanks to the many employees who joined and came together. I’m glad to see that POSCO enhanced its status as a global player with this project. I would love to visit and see with my eyes once the Çanakkale 1915 Bridge is complete.”

Bridges could be considered one of the pinnacles of modern civilization. Looking at a far stretched bridge might make one marvel, “Wow, how did people build that? Human technology is amazing.” The ‘people’ who make this amazing structure isn’t far away. Even today, the bridges connecting the world are supported by POSCO’s steel.