High towering cranes are a common sight at construction sites. These cranes are gigantic, and while at work, they are quite eye-catching.

Among them, the title of the World’s Largest Crane goes to SGC-250 — referred to as “Big Carl.” With a maximum reach of 275 meters, Big Carl was designed and built by Sarens, a Belgium-based crane rental service company. Since September 2019, this enormous ring crane has been under operation at the construction site of Hinkley Point C nuclear power station in the UK.

According to Sarens, high-strength steel was the key enabling the company to create this stunning example of modern engineering. See the details as POSCO Newsroom presents worldsteel, “World’s Biggest Crane ‘Big Carl’ Is Steel-Built Behemoth.”

The largest crane in the world, the SGC-250, uses the power of high-strength steel to deliver unprecedented lifting capacity.

A tonne-metre is a measure of how much a crane can lift in relation to how far the load is positioned from the base of the central mast. Dividing the tonne-metre rating by the distance from centre gives the max capacity at that distance. A 250,000 tonne-metre rating means if the load is positioned 100 metres from the central mast the maximum lifting capacity is 2,500 tonnes. So even when extended out to a 100-metre radius, this crane is capable of lifting the weight of eight planes, or 563 elephants.

Designed and built by Belgium-based heavy lifting powerhouse Sarens, it is called the SGC-250 – or, to use its nickname, ‘Big Carl’. The ring-based crane, the first of Sarens’ third generation of ring cranes, is now being put to work in its first project at the Hinkley Point C nuclear power plant in the UK.

More than 600 prefabricated sections of the new power station will be lifted into place, including the main sections of the steel containment liner and dome for each reactor building. It is a process that construction director Rob Jordan describes as “innovative… pre-fabrication helps us boost quality, gives better conditions for skilled workers, and saves time”.

It is only possible because of the SGC-250’s height – 0.25 km high in its tallest configuration, a little taller than One Canada Square in London’s Canary Wharf – and sheer load capacity. Such immense lifting height is the product of a 118-metre high-strength steel built main boom, which stands 160 metres high, and a 52.3 metre heavy duty jib which adds an additional 100 metres.

Why ‘Big Carl’? That’s in honour of Sarens director of technical solutions, Carl Sarens. “The SGC-250 is a game changer,” he said. “Sarens is proud to have conceived its design, designed it, and built it. We believe that this creation will serve Hinkley Point C, and other sites around the world, like no other crane can.”

The design process, he explained, involved 16,000 hours of R&D, 6,000 hours of CAD design and more than 25,000 hours of specialist design detail work. Construction commenced in August 2017, using components sourced from across Europe, and was completed in 14 months ready for the official public launch in November 2018.

Conceptually, the SGC-250 was inspired by the trend towards modularisation within construction. Increasingly, large portions are being prefabricated within a controlled environment, then transported to construction sites for lifting into their final positions. These individual models are so heavy, cranes with very high lifting capacities are required – and tall lifting heights are needed to deal with the size of major projects such as Hinckley Point C. 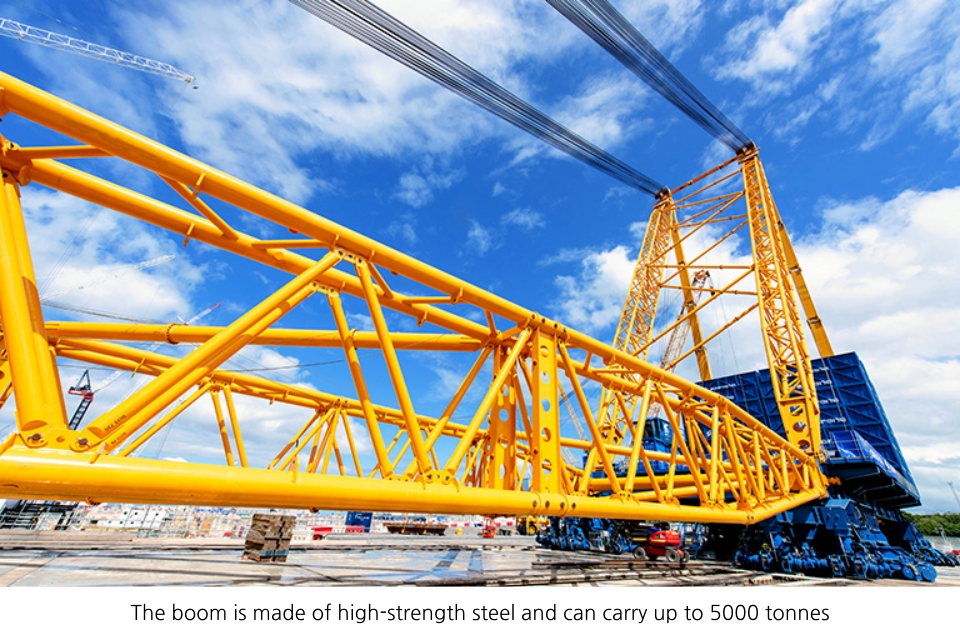 After construction in Belgium, Big Carl was transported to the UK in 2019, with 280 trucks taking it piece-by-piece for reconstruction on site – which required the use of five smaller cranes. After 10 weeks, the SGC-250 was boomed up in August and began its first lift in mid-September, with the first significant lifts to begin in spring 2020. It is scheduled to work on the site for four years in a £20 million contract, supported by 52 other tower cranes.

Cleverly, the crane was transported in boxes that are now being used as its counterweights. These were filled with locally sourced material on site: there are a total of 52 counterweights, each weighing 100 tonnes.

There is 6km of rail track at the site, allowing the crane to travel between three lifting locations – an industry first for a fully-rigged crane, says Sarens. Smaller models such as the SGC-120 rest on a steel ring, but due to the scale of the building operation, the SGC-250 moves on high-grade steel rails that allow it to shift between positions without the need for reassembly.

It runs on 96 individual wheels when moving between positions. But despite its tremendous weight, careful design of the four bogies that run on a double ring beam made from high-strength steel and a spreader mat means it exerts a maximum ground pressure of just 25 tonnes per square metre. It can also slew 360 degrees, thanks to an extra 128 wheels. The ring itself has a diameter of less than 50 metres.

For the actual lifting, there are more than two kilometres of thick steel cables to which the crane’s hook is attached. Similar cables are also are used to operate the pulleys that lift the boom, and these must take the enormous strain of moving the massive components. 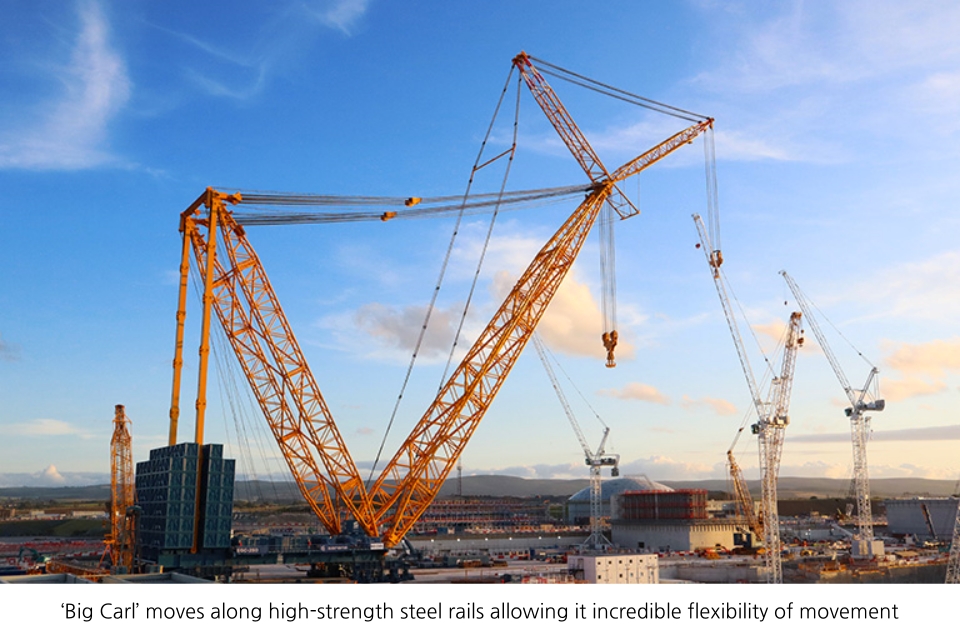 Because of its size and status, safety was a design priority. “The hoisting and slewing control system consists of the highest quality components and meets the highest performance level (PLE),” said Carl Sarens. “The design of the crane has been reviewed completely and all functionality and overload tests witnessed by a third-party inspection company.”

The crane can be fitted with a collision avoidance system and is expected to continue operations during the night, to lessen local disturbance and allow all the other smaller cranes to operate during the day.

Whether it’s the rails, the cables or the high-strength steel that forms the boom, this record-breaking lifting machine is a steel-built engineering triumph that is set to change the face of large-scale construction.

The original content published on the worldsteel’s ‘Our Stories’ section is available at: https://stories.worldsteel.org/construction-building/worlds-biggest-crane-big-carl-is-steel-built-behemoth/