Why should Busan host the World Expo in 2030 (feat. POSCO Group)?

Busan, Korea’s second largest city and representative trade city, is challenging to host the World Expo in 2030! As it was the venue for the 2002 World Cup, Asian Games, and Busan International Film Festival, it is an attractive city where a lot of tourists from all over the world visit and even Koreans visit to travel. If Busan is selected as the venue for the 2030 World Expo, it will be held for a total of six months from May 1 to October 31 in 2030 under the slogan of ‘Transforming our world, Navigating toward a better future’ in the area of the North Port of Busan Metropolitan City. Just as Osaka of Japan and Shanghai of China, emerged as world-class cities through the successful hosting of the Osaka Expo in 1970 and the Shanghai Expo in 2010 respectively, let’s take a look at the economic performance of the 2030 Busan World Expo and the steps POSCO has taken to support the successful hosting of the World Expo in Busan.

l What is Expo?

The Expo is an event authorized by the Bureau International des Expositions (BIE) and is considered one of the world’s three major international events including the Olympics and the World Cup. It is an economic and cultural Olympics that introduces the achievements of industrial and scientific technology development. It also demonstrates the capabilities of the host country as a venue for global communication to educate the public and promote innovation and cooperation between countries and companies. In particular, participating countries are using it as a venue to showcase their overall capabilities by exhibiting and directing their scientific, technological, and cultural achievements and new visions of the future.

In order to hold the expo, it is necessary to obtain a hosting right from the ‘Bureau International des Expositions (BIE)’ and the expo recognized by the BIE is divided into Registered Exposition and Recognized Exposition. Daejeon Expo and Yeosu Expo, which has been held in the past, is a Recognized Expo, meaning medium-scale professional expo that is held once during the period between Registered expos.

Unlike the Recognized Expo, which is held for up to 90 days with a clear specific theme, the Registered Expo is a large-scale comprehensive expo that can cover all the topics related to the development of mankind, allowing exhibitions in various fields. In addition, it is held every 5 years for a maximum of 180 days, and the scale of the exhibition is unlimited. Among them, the largest and most representative Registered Expo is called World Expo or World’s fair. If the World’s fair before the 20th century focused on showing the results of industrial innovation, it has gradually developed into a venue for exchanging civilizations and cultures by addressing the challenges facing mankind in the 21st century and addressing future development prospects.

l Opportunity for the nation to leap forward

There are two main reasons why many countries want to hold the Expo. First, it is to enhance the national brand. In the long run, the national economy can be revitalized and job creation can be led at the same time such as building various infrastructures and expanding the transportation network for the development of the expo site. Therefore, it can be expected that the status in the international community will be raised, as well as the promotion of various international exchanges and international trade. Second, the Expo is the starting point of urban recreation. It is expected to have a positive effect on the promotion of urban development in various fields, such as revitalizing the local economy by securing various social overhead capital, promoting tourism, and improving the level of awareness of the residents. 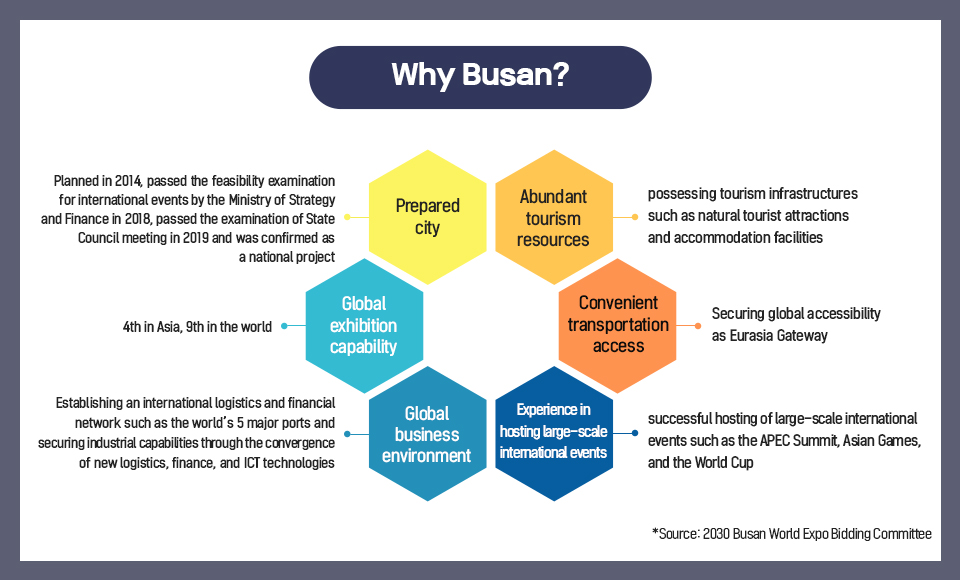 Busan is one of the world’s top 10 port logistics cities and has excellent MICE infrastructure and tourism facilities. In addition, it has a history of being ‘the world’s only refugee city’, providing an opportunity to convey the message of ‘common prosperity and peace of mankind’ that the Registered Expo aims for. Currently, cities that have applied for hosting the 2030 Expo in Busan, Riyadh of Saudi Arabia, Moscow of Russia, and Rome of Italy. Korea presents a sustainable future and is expected to show Korea’s potential based on powerful K-contents such as BTS and squid game. 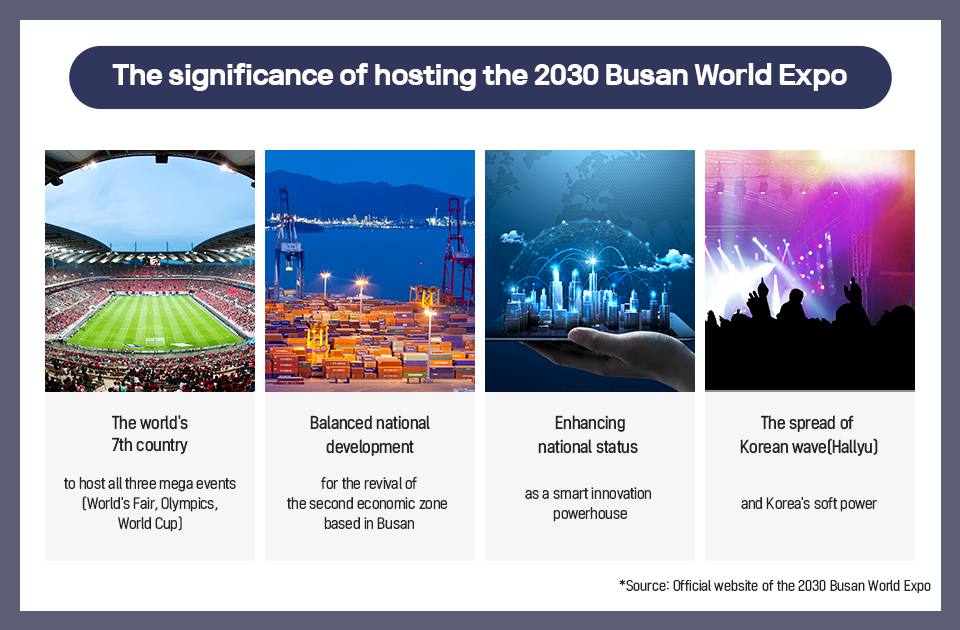 POSCO Group is also focusing on overseas negotiations and public relations, led by the leaders of each group company by launching a task force (TF) in July of this year, with Jeong-woo Choi, the CEO of POSCO group serving as a member of the Busan Expo Private Committee and Tak Jeong, president of POSCO serving as an executive committee member

▲ (Left) Jeong-woo Choi, the CEO of POSCO met with the President of Argentina and asked for support for the 2030 Busan Expo. (Right) Tak Jeong, president of POSCO met Minister Santiago Cafiero of the Ministry of Foreign Affairs and Worship of Argentina along with Myung-soo Jang, Korean Ambassador to Argentina to emphasize that Busan is the most suitable city to host the World Expo 2030.

Tak Jeong, president of POSCO, as an executive committee member of the Busan World Expo, visited three South American countries including Chile, Uruguay, and Argentina with Duck-soo Han, Prime Minister of Korea from October 9 to 17 and visited Argentina once again on the 14th (local time) to support the bid.

POSCO Group is drawing attention and response from not only local people but also visitors from overseas by installing promotional banners in places where a lot of people pass by such as parks, banks, and airports in Buenos Aires, the capital of Argentina.

In addition, POSCO Group is actively sending delegations to seven countries including Indonesia, Vietnam, Thailand, Mexico, Argentina, Uzbekistan, and Chile, which are the main negotiating countries of the POSCO Group, strengthening support for the bid. In August, Seung-hyun Cho, POSCO International Textile’s President of the Corporation of the Central Asia Region, visited Uzbekistan to commemorate the 30th anniversary of diplomatic relations between Korea and Uzbekistan. He also actively conducted public relations activities to support hosting the Expo. Kyung-han Kim, head of the international trade office of POSCO met with the head of Vietnam’s Ministry of Culture, Sport, and Tourism to conduct activities to support the bid.

▲ On the left is an electric billboard at Pohang Station, where an advertisement for supporting POSCO to host the Busan Expo is displayed. On the right is a picture of the Busan Expo promotional materials displayed at the Pohang Promotion Center and Baegun Art Hall in Gwangyang, respectively.

POSCO is also actively promoting public relations activities to raise the interest of Koreans in hosting the World Expo 2030 in Busan. Currently, POSCO is sending out advertisements to support the bid for the Busan Expo on the billboards of Pohang/Suncheon Station and in the KTX rooms. The promotional materials are placed in the public relations hall, history museum, and welcome center of Park1538, a complex cultural space of POSCO. It is also taking the lead in promoting the Busan World Expo to the public by using its own infrastructures, such as posting advertisements for the Pohang Steelers and the Jeonnam Dragons stadiums.

Just as the steam locomotive introduced in 1851 was developed into subways, high-speed trains, and magnetic levitation trains, and the phone in 1876 was developed into today’s smartphone, expectations are high for what kind of new technologies will be introduced at the expo. It would be even more meaningful to hold this important event in Busan of Korea, where innovative technologies will be unveiled. As the venue for the 2030 World Expo will be selected next year, it is time for the government and the companies to start to actively support and for the public to have a high level of interest in hosting the World Expo in Busan. POSCO highly supports all those people who are busy making efforts to host the World Expo in Busan, and also cheers for the success of hosting the 2030 Busan World Expo! 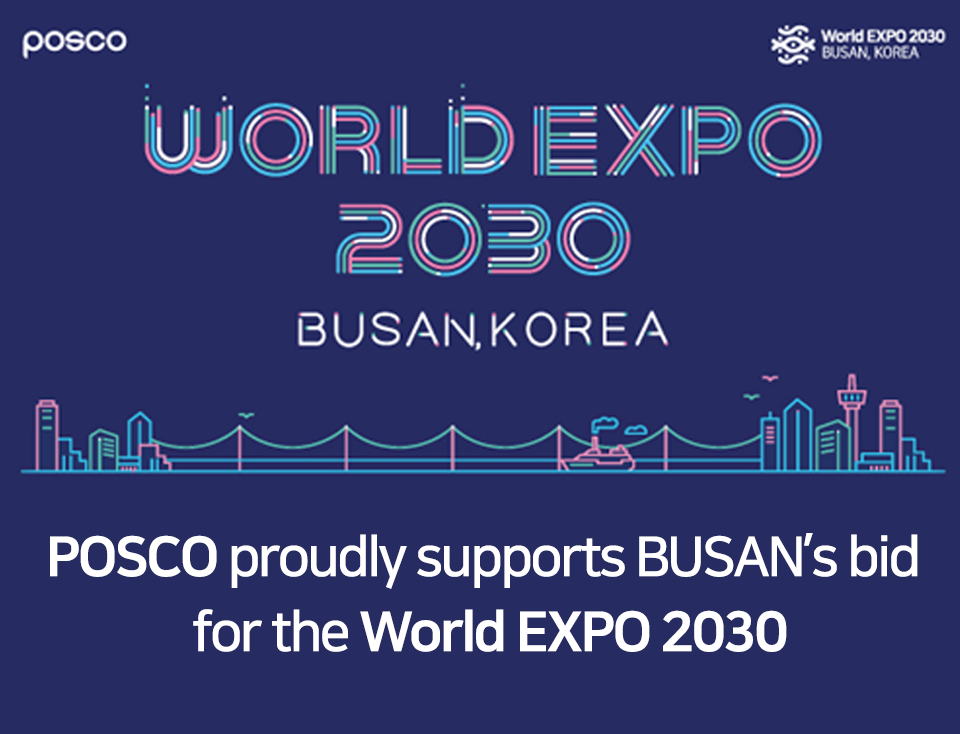