The reason for creating ‘Graphene Valley’ in Pohang

The birth and the discovery of new materials give the world great expectations. ‘Graphene’ is the right example of it.

Graphene is able to flow 100 times more current than copper at the speed 100 times faster than silicon at room temperature and its high thermal conductivity allows it to transfer heat 10 times better than copper and it’s 100 times stronger than steel.

It’s virtually transparent to light and also flexible enough to increase up to 20% of its area. Besides, electrical conductivity does not disappear even when fully folded. Graphene can be said to be a super-power material because it is thin, bends well and even light. 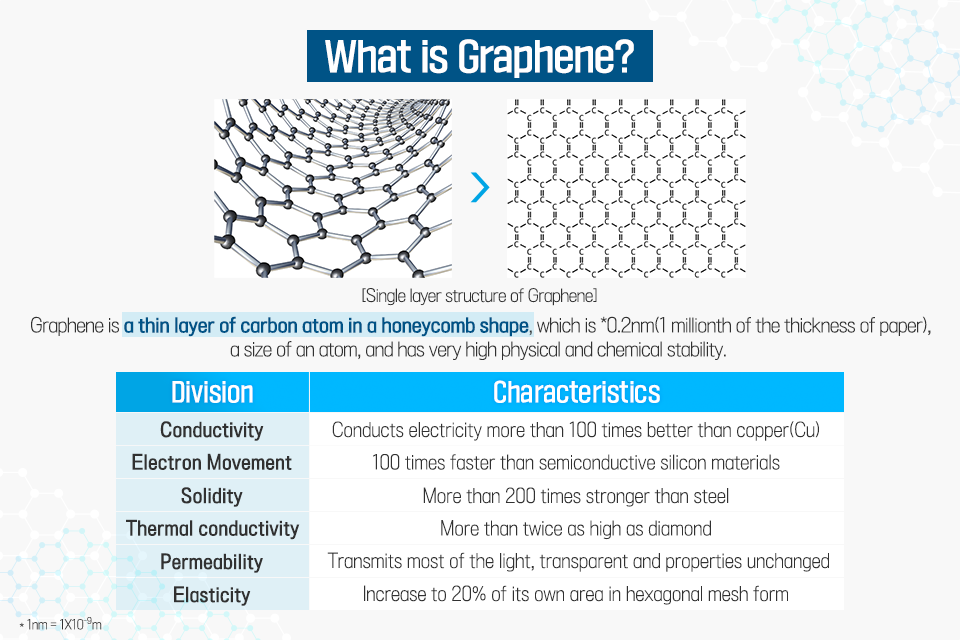 The problem is that this graphene material has not yet been produced in bulk. Graphene, which is called the ‘New material of dreams’ enough to win the Nobel Prize in Physics has not exceeded the threshold of mass production.

However, dreamers will not leave this charming material unattended. Global institutions are jumping into research and development for commercialization to take the lead by pioneering the market.

On March 31, POSCO also declared its participation in the journey to commercialize graphene technology along with domestic ventures, universities, research institutes, and communities.  POSCO, a very steel-oriented business company, is also keeping an eye on new materials in the future. An ambitious step has begun to lead the market by advancing the commercialization of graphene technology through the establishment of Pohang Graphene Valley, which was agreed with Graphene Square, Postech (Pohang University of Science), RIST (Pohang Institute of Industrial Science & Technology), and Pohang City.

Graphene Valley was established in Pohang because, above all, excellent industrial, academic and research infrastructure were supported. Research infrastructure such as Postech of Basic Science, RIST for commercialization research, POSCO Technology Research Institute, and PAL(Pohang Accelerator Laboratory) are in place.

In addition, commitment of Pohang City and POSCO Group to cooperate and support to explore the future graphene-based market worked, and special love for Pohang of Seoul National University professor Byung-Hee Hong, who graduated from Postech and founded graphene square also played a part.

Let’s take a look at the roles of participating institutes in establishing Graphene Valley in Pohang. 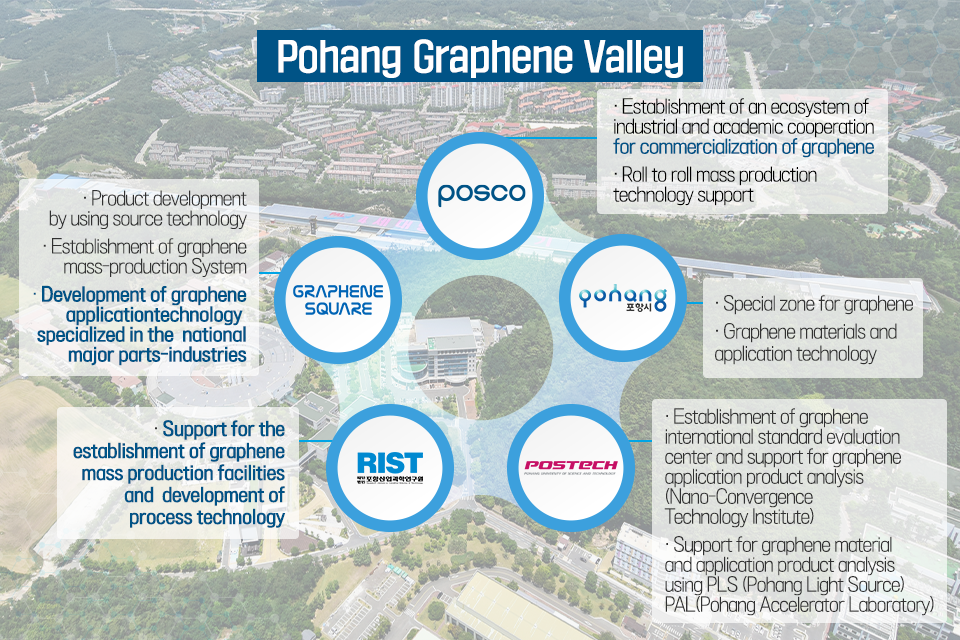 The next is POSCO. POSCO is cooperating with RIST’s process technology experts to support the construction of R2R(Roll to Roll) mass production facilities. It plans to use technology and know-how of the basic material, steel’s manufacturing process to build graphene R2R process.

PAL plans to analyze the electronic structure of graphene by utilizing EUV (Extreme Ultraviolet) light sources of 4th generation and secure reliability of application materials such as semiconductors.

On the other hand, Pohang City supports attraction of enterprises that need application technology and provides administrative expediency through the designation of Pohang Graphene special zone. 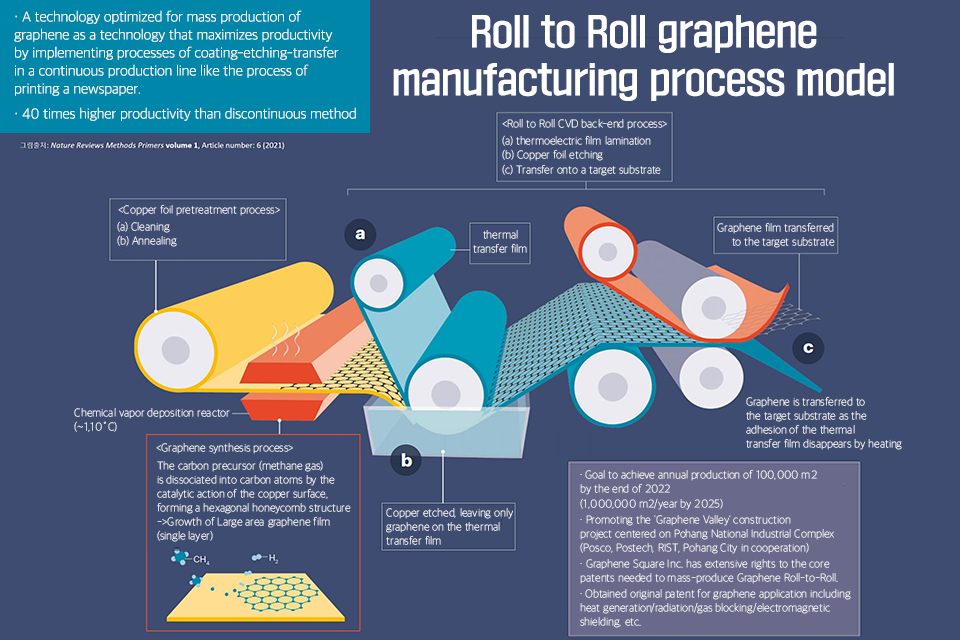 l How to apply a ‘high-tech cloak’, Graphene.

Graphene is called a ‘high-tech cloak’, that can add rigidity to existing materials and turn non-electric materials into conductors.

If mass production of graphene is carried out, it is expected that the application of materials will be endless, bringing a new paradigm to various industrial groups. Graphene can be applied to the national major industries, including displays that require great solidity, thermal conductivity, and electron movement, secondary batteries, solar power, and automotive lighting, as well as heat-resistant films and coating materials.

We hope that Pohang will become another mecca of material innovation by the successful operation of Pohang Graphene Valley. 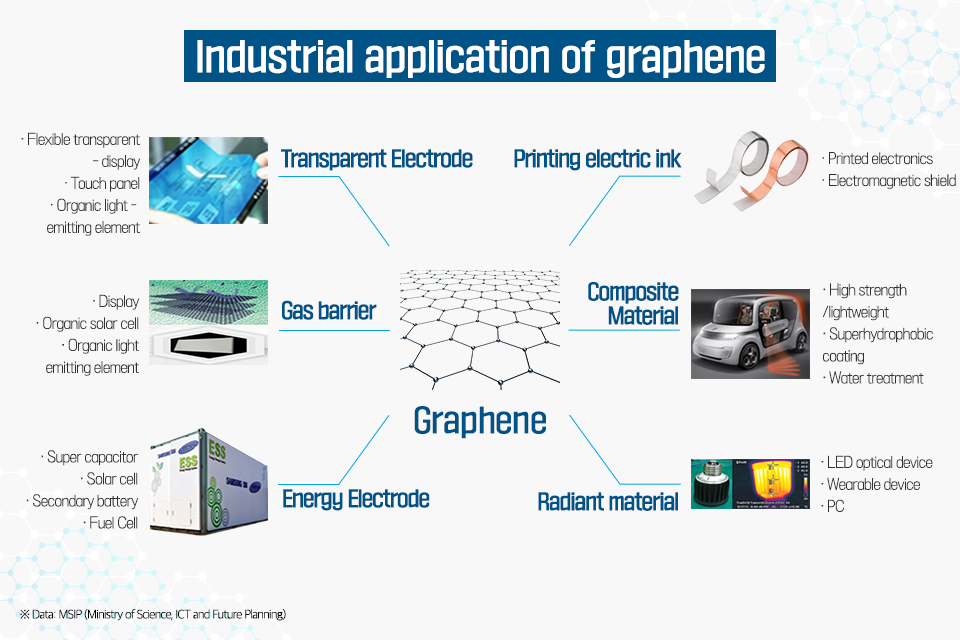 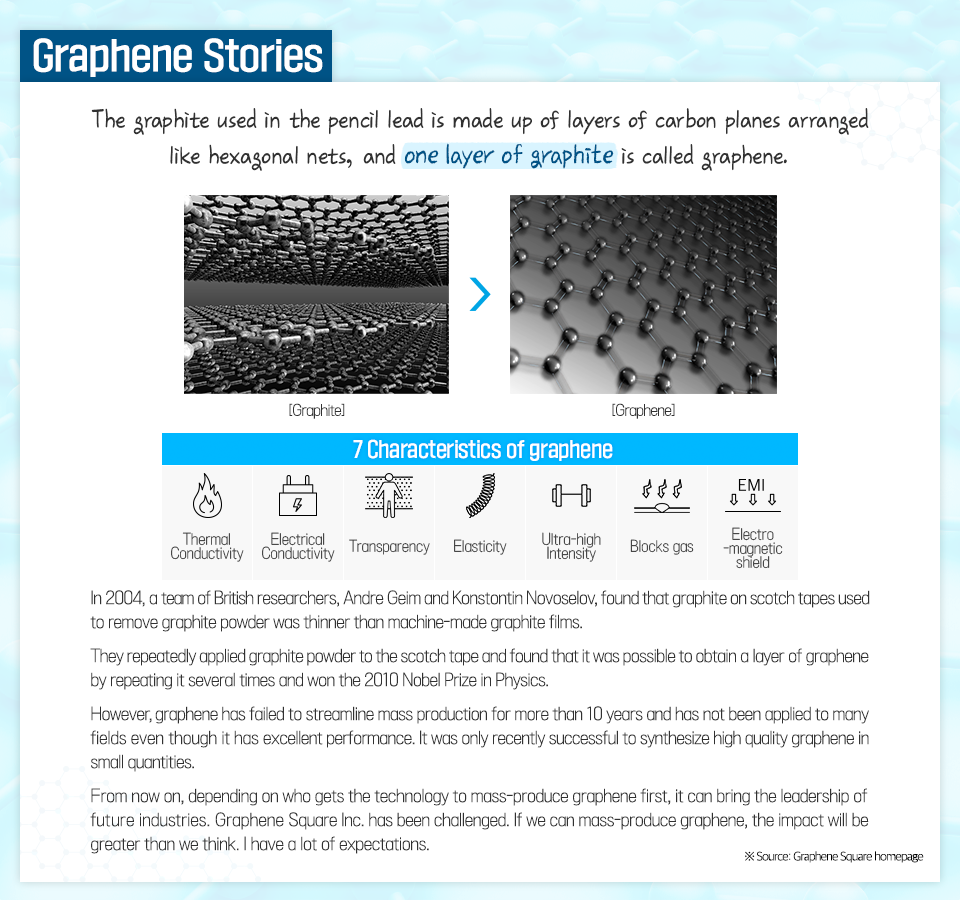