The importance and significance of POSCO’s Carbon Neutrality Declaration

The Korean government declared carbon neutrality through the 2050 Long-term low greenhouse gas Emission Development Strategies (LEDS*) and announced a plan to significantly raise the intermediate route, the 2030 National Reduction Target (NDC) within this year. The existing 2030 Nationally Determined Contribution (NDC*) said that it would reduce greenhouse gas emissions by 24.4% compared to 2017, but it is now expected to exceed 30%. With the outbreak of COVID-19 raising awareness of climate change and increasing international demands for carbon neutrality, Korea also felt the need to raise the Nationally Determined Contribution (NDC) to keep pace with this trend.
*LEDS: Long-term low greenhouse gas Emission Development Strategies
*NDC: Nationally Determined Contribution 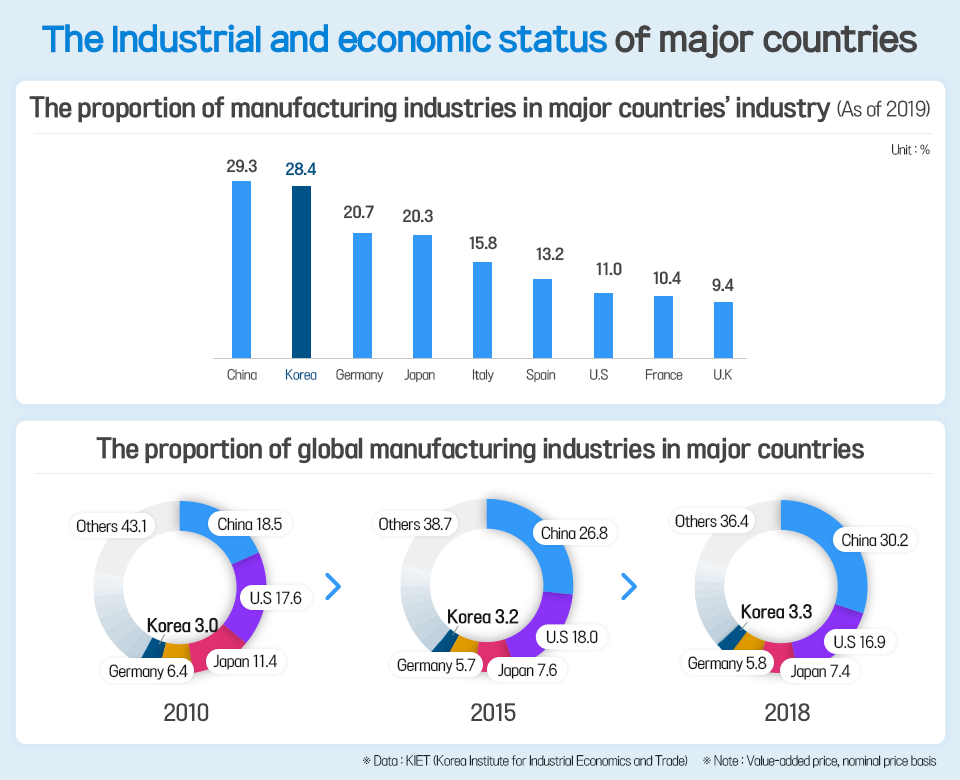 In the case of China, unlike the U.S., Europe, Korea, and Japan declared carbon neutrality by 2050, China predicted the peak of greenhouse gas emissions in 2030 and announced the achievement of carbon neutrality by 2060. The manufacturing industry accounted for 29.3%, taking into account the current status of the country’s economy and industry, which is still growing, and the preparation and speed of structural transformation in the future.

Considering that developed countries such as Europe and the U.S. have systematically reduced greenhouse gas emissions and changed the industrial structure for about 30 years since the 1990s and planning to achieve zero emissions for the next 30 years, it is challenging for Korea to achieve carbon neutrality in 30 years, which is only half of that of advanced countries, after passing the COVID-19 situation and recovering again in 2021. This is because it surpasses the industrial structural characteristics of the high proportion of the carbon-intensive industry, the reorganization of the industrial ecosystem, and the differences between countries in climate response capabilities at once.

In any case, the most important catalyst in establishing Korea’s carbon neutrality vision is the industrial sector, and among them, POSCO’s declaration of carbon neutrality was by far the most important. POSCO is a leading company in the global steel industry both in name and reality, but at the same time, it is also a company that produces high-quality and high-performance steel products through blast furnace method using bituminous coal as a reducing agent and emits a lot of greenhouse gases. POSCO expressed its willingness to strengthen both corporate competitiveness and environmental competitiveness in the global steel industry in the medium to long term.

Of course, the strategy to achieve the carbon neutrality vision includes supplying lightweight and high-performance steel products to increase the contribution to social reduction, but since the goal is to reduce greenhouse gases emitted during the production process to near zero, great determination and momentum must be supported.

However, the reality is that hydrogen reduction steel has been trying for the past decades, but it has still not been able to replace existing facilities. Therefore, uncertainty about the success of hydrogen reduction steel is increasing and it is raising expectations and concerns at the same time. However, if POSCO, which has been selected as the No. 1 in the ‘World’s most competitive steel company’ by WSD, a global steel analyst, for 11 consecutive years, the possibility of introducing innovative technologies and processes is higher than any other global company. In fact, POSCO’s technology development and commercialization capabilities are receiving the highest score among WSD’s evaluation indicators.

In addition, HyREX led by POSCO is advantageous compared to competing projects as it can omit the pretreatment process of making pellets using fine ore. Looking at the hydrogen reduction steel project being developed by major steel companies to drastically reduce greenhouse gases through innovative processes and technology development, Sweden’s SSAB, which announced that it has succeeded in operating a demonstration plant for hydrogen reduction steel, has an annual steel production scale of only 7 million tons. This is not only to develop innovative processes to replace its steel facilities but to become a solution provider for global steel companies through commercialization.

Arcelor Mittal, one of the world’s largest steelmakers, has only 100,000 tons of demonstration plants, which is still far from commercialization. However, the European subsidiary of Arcelor Mittal has requested support from the European Committee and major countries for the development and commercialization of hydrogen reduction steel and is promoting the development of innovative process technology with financial resources.

HYFOR, a steel equipment and process solution company that has a business model of solutions and engineering, does not produce steel. Austria’s Voestalpine, which produces only 7 million tons per year, also has a strategy to maintain its position as a steel solution company.

According to a report written by Transition Pathway Initiative (TPI)* in the United Kingdom early last year by the Grandham Research Institute on Climate Change and the Environment of London School of Economics, steel companies including ArcelorMittal of India, POSCO of Korea, and ThyssenKrupp of Germany received the highest rating for climate management quality. It was evaluated that they fully recognized the crisis faced by strategic evaluation and management decision-making and integrated capabilities.
*TPI (Transition Pathway Initiative): A program that evaluates the low carbon economic response preparation of the company.

If the Korean steel industry develops innovative technology and changes the production process like this, it will open up opportunities to not only strengthen the domestic industrial ecosystem and reduce greenhouse gas emissions but also to become a global solution provider. In other words, POSCO’s declaration of carbon neutrality and the announcement of its implementation strategy are expressions of confidence and visions that the Korean steel industry will secure the leadership of the industry in the future even in a new paradigm.

However, for the achievement of carbon neutrality in the steel industry, the efforts of individual companies or industries alone cannot be considered sufficient. Overall social support is needed so that major industries of Korea and global companies can compete equally in the global market. Above all, for successful settlement of hydrogen reduction steel company, it requires the infrastructure that ensures a stable and sufficient supply of green hydrogen and clean energy, and an appropriate price level to support international competitiveness.

In addition, systems and policies are needed to increase consumer choice in buildings and transportation, as well as produce low-carbon or carbon-neutral products. Only then can carbon neutrality become the driving force of a true ‘Green New Deal’ that enables the creation of new industries and securing a new competitive advantage, rather than an external pressure factor which means the contraction of the main industry.