Why Steel Bikes Will Always Be in the Game

Cycling enthusiasts look forward to July every year, for the event many argue as the most prestigious competition in the world of cycling. The Tour de France (the Tour) began in 1903, sponsored by a local newspaper company called L’Auto and is now in its 104th run. For bike sponsors, the Tour is a chance to showcase their brand’s newest gear and technology. The biggest bike companies invest millions of marketing dollars into a team competing on the Tour, for the greatest exposure they will receive all year.  Every year, 10-12 million spectators of 40 different nationalities gather roadside and many more tune into media coverage of the three-week event.

Today, the four most common materials used in race bikes are steel, aluminum, titanium and carbon fiber. The most common on the Tour are carbon fiber bikes that can range from USD 10,000~20,000 in retail price; that’s before adding the thousands of dollars worth of additional gear. The majority of competitive cyclists is not sponsored by a major bike company and cannot afford high-end bikes. Additionally, market conditions and the changing landscape of the racing industry could have manufacturers looking for alternatives.

Michael O.B. Krähe analyzed the road race bicycle market trend for 2017 and beyond by looking at data from the Festive 500 Challenge on Strava, a widely-used application for tracking race times and training. In 2016, 83,000 challengers from all over the world attempted to ride 500 kilometers between Christmas and New Year’s Day, thus providing a rough but insightful representation of the global market for race bicycles.

Cyclists take a break from cycling

Krähe also looked into Jedermann Rennen (JDR) races in Germany, to account for cyclists who do not race or train during the winter season of the Festive 500 Challenge. The JDR, or “everyman’s race”, is an amateur version of a professional race held on the same day and route as the main event, kind of like the pro-am of golf. There was an average of 15% to 25% decline in the number of participants in JDRs from 2011 to 2016. Of those participants, more than 60% were over 40 years old and a mere 10% under 30 years old. 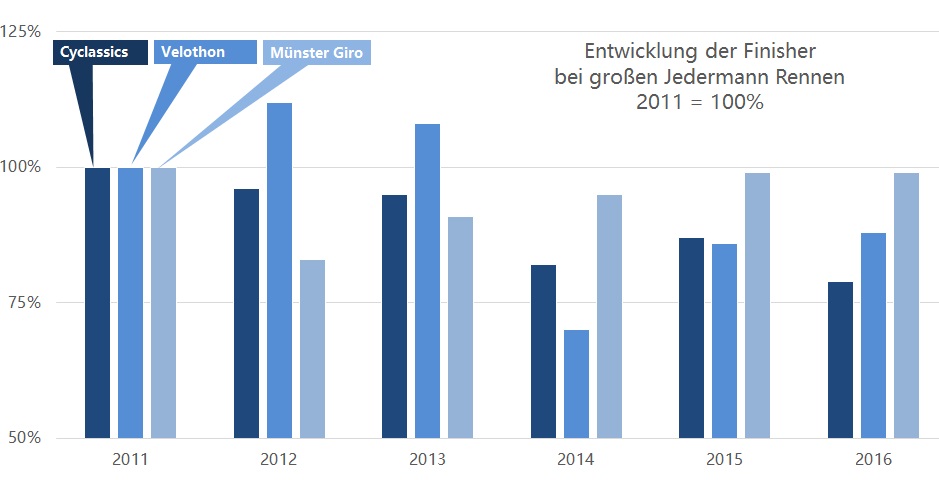 The number of participants in three different JDR races from 2011-2016 (Photo courtesy of Cycling.com)

Recent changes only made things worse – there were 250,000 unsold bikes at the end of 2015, up 44% from the year before. It led to discounted prices in 2016. Then, at the end of 2016, the UCI (governing body of professional cycling) banned disc brakes, a popular feature on almost every race bike. This announcement came late when sponsoring companies were already finalizing their 2018-19 products, all with disc brakes. UCI article 1.3.007 requires all bikes used in competition to be commercially available, which could lead to another overstock of race bikes.

Bikes are placed on racks for display in a retail store

What does this mean for the race bike market?

Prices will have to drop along with the decrease in demand for race bikes. However, high performance will still be expected from race bikes by the long-time cyclists who become more devoted to the sport over time. A low-cost, well performing, and easy-maintenance bike will be the future of race bicycles.

It’s time for manufacturers to revisit the drawing board for race bikes.

Most teams on the Tour de France are riding carbon fiber bicycles. Much credit is owed to Lance Armstrong who was the first Tour rider to win on a bike with carbon fiber frames. Though stripped of his seven titles as of 2012 due to doping accusations, his initial win unleashed the age of carbon fiber race bikes. The following years coupled light-weight carbon fiber with advanced technology for an outright dominance of carbon fiber frames in professional cycling.

Nonetheless, before there was carbon, there was steel, and aluminum and titanium.

From its advent to the 1970s, bicycles traditionally had steel frames, known for its strength, durability, and affordability. In the ‘70s to the ‘80s, manufacturers began turning to aluminum frames in the general wave of efforts to lightweight race bikes. To add, aluminum frames are easy to manufacture and corrosion-resistant. Titanium frames are also popular for its lightweight and durability, but it never completely dominated the market due to high costs and difficulties in manufacturing. Then came carbon and it took off.

The problem is that the technique to manufacture carbon fiber frames is high-end. Not only in its price, but if precise technology is not applied, riders will get little or none of the benefits of carbon fiber (high stiffness to weight ratio, lightweight, low thermal expansion, the ability to customize, etc.). Thus, there are few people who can actually repair carbon fiber bikes correctly, whereas any local shop can repair a steel model. Moreover, carbon fiber is non-recyclable, unlike steel which can be melted down and re-used in other ways. The UCI has also set the minimum weight requirement of race bikes at 6.8 kilograms, and non-carbon bikes can now be built down to the minimum weight.

Carbon fiber frames are also known for its bespoke qualities. Aluminum is very hard to tailor, but there is a new wave of bespoke frame workers who are choosing steel for its cost, durability, and moldability. Major brands Columbus and Reynolds are also returning to steel with their new stainless steel tubes that are light and stiff enough to give carbon fiber a run for its money.

Although the market for race bicycles is looking stagnant, this does not apply to the bike market as a whole, including transportation and leisure bikes. In fact, this market is projected to grow over the coming years according to Lucintel, a global research firm, which projected the global bicycle market to reach 59.9 billion U.S. dollars by 2021. The growth is calculated upon the cost-friendly, efficient and environmentally sustainable method of transportation bikes will provide. Steel bikes will be a driving force in this growth as well, for its affordable and sustainable qualities, ensuring it will always be in the game.