Like the lighthouse guiding the way in the night sky, Lighthouse factories shine a light on the future of manufacturing. They demonstrate leadership in applying Fourth Industrial Revolution technologies like IoT, AI, and Big Data. In July last year, the World Economic Forum (WEF) announced POSCO as one of the world’s ‘Lighthouse factory.’

The World Economic Forum designated POSCO as a Lighthouse factory in the steel industry for the following reasons: (1) application of AI technology to enhance productivity and quality, (2) establishment of a smart factory platform through an outstanding partnership with academia, SMEs, and startups.

POSCO CEO Jeong-Woo Choi and POSCO executives and employees, who participated in the smart factory project, accompanied the President and Young-Sun Park, Minister MSS (Ministry of SMEs and Startups), and introduced the current operation status of POSCO’s smart factory. 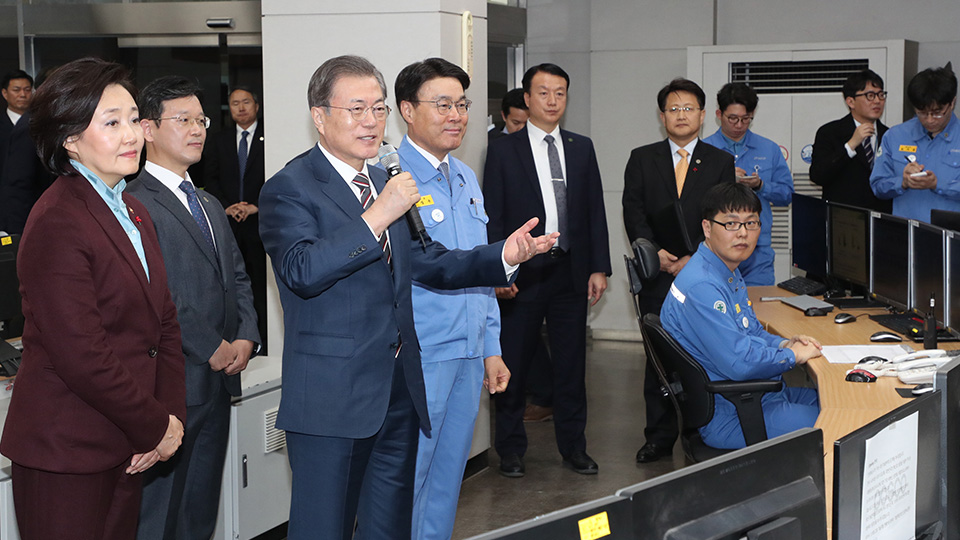 ▲ President Jae-In Moon at the control room of the No.2 blast furnace of POSCO Pohang Works.

POSCO’s unique smart factory platform ‘PosFrame,’ is the key to developing a smart steelwork. PosFrame collects and formalizes data acquired from individual plants that have accumulated field experience and know-how over the past 50 years. The system self assesses to create optimal process conditions, and this enables live monitor-controlling of the production process.

Numerous outcomes of this implementation have been observed, including enhanced productivity and efficiency due to minimized manual labor. However, the most significant change would be the transformation to a “people-centered” workplace, which augments the creativity of employees.

In addition to the introduction of the “Smart Data Center,” — a core infrastructure where POSCO steel technologies and smart IT technologies merge — the President received a briefing of the current status of POSCO’s partnership project pursuing shared growth. President Moon also witnessed the production process of molten iron in the No.2 blast furnace — a high-tech blast furnace equipped with AI technology.

The Smart Data Center is where all Big Data, obtained from the IoT (Internet of Things) sensor, are collected and stored in realtime. The facility serves as core infrastructure in building the POSCO Smart Factory.

With an automated system that controls the inside condition through deep learning AI technology, the smart blast furnace offered multiple benefits, such as cost reduction and quality improvement, that were difficult to accomplish with pre-existing technologies. As for molten iron production, the smart furnace not only reduced the input energy to 4kg per ton but also boosted the daily production of molten iron by 240 tons. This annually amounts to 85,000 tons, with which automakers can produce 85,000 more cars. 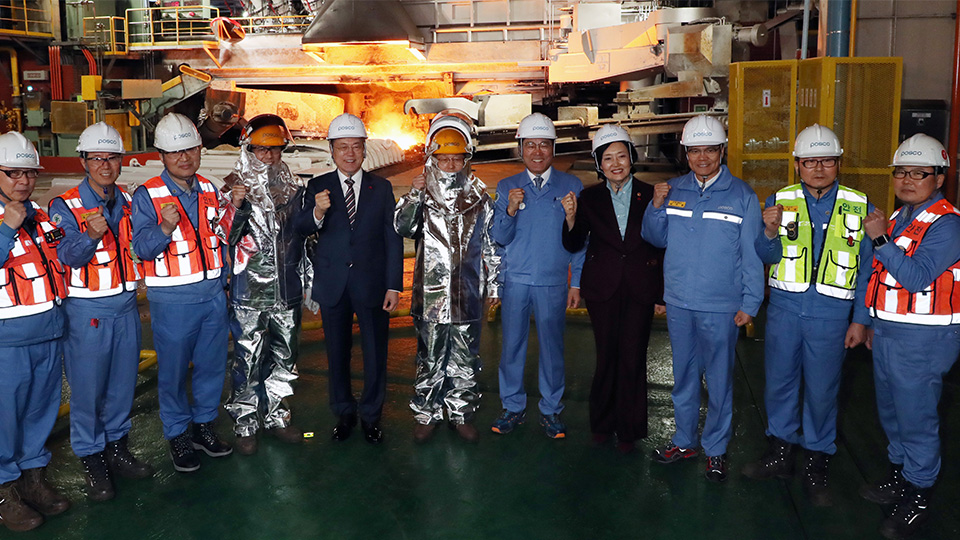 ▲ President Jae-In Moon poses for a picture at the No.2 blast furnace of POSCO Pohang Works.

POSCO has partnered with the MSS to offer a nurturing environment for the growth of SMEs and to foster a stable industrial ecosystem. For the purpose, two schemes are being conducted: ‘Building smart factories for shared growth’ is one and ‘Smartification Consulting’ is the other. By 2023, POSCO is set to contribute 20 billion KRW to empower 1,000 companies.

As of last year, POSCO has engaged in building smart factories for 110 companies — including 59 companies that do not have direct connections with POSCO. A study on the performance measurement of 25 companies revealed that with the smart factory, productivity increased by 43% and product quality was improved by 52%  — whereas cost and delivery period were minimized by approximately 27%.

Dongkuk Industries CEO Sang-Cheol An, and Jonghap Polestar Engineering CEO Cheol-Gyu Kim, went on to explain in detail how POSCO’s support service benefited each company. At Dongkuk Industries, POSCO supported establishing an AI model for optimal pickling. In the case of Jonghap Polestar Engineering, POSCO helped setting up a mobile process management system. In both cases, POSCO’s support service eventually led to an increase of 60% in productivity and 35% in sales.

“POSCO will continue to provide world-class premium products and services utilizing smart technology. Furthermore, with our experience, we will engage in support services for SMEs desiring smart factories. This will actively nurture the competitiveness of our industrial ecosystem,” said POSCO CEO Jeong-Woo Choi.

To learn more about the President’s visit to POSCO, check out the following footage by KTV (Korean).