Restoration and Propagation of a Coral Reef in Sukarame Village, Carita, Pandeglang, Banten

The effort to restore coastal and marine ecosystems is now becoming a global agenda that needs to be completed sustainably and carried out jointly by all parties. As one of our mother companies, POSCO has developed an artificial reef made of steel slag and named Triton after the God of the sea in Greek mythology. This material has been proven safe for the environment and marine life and has received approval from the Ministry of Oceans and Fisheries of Korea. Triton contains calcium and iron, which are very advantageous for marine ecosystems. Triton could also restrain hurricanes and tsunamis, and it is resistant to seawater corrosion. 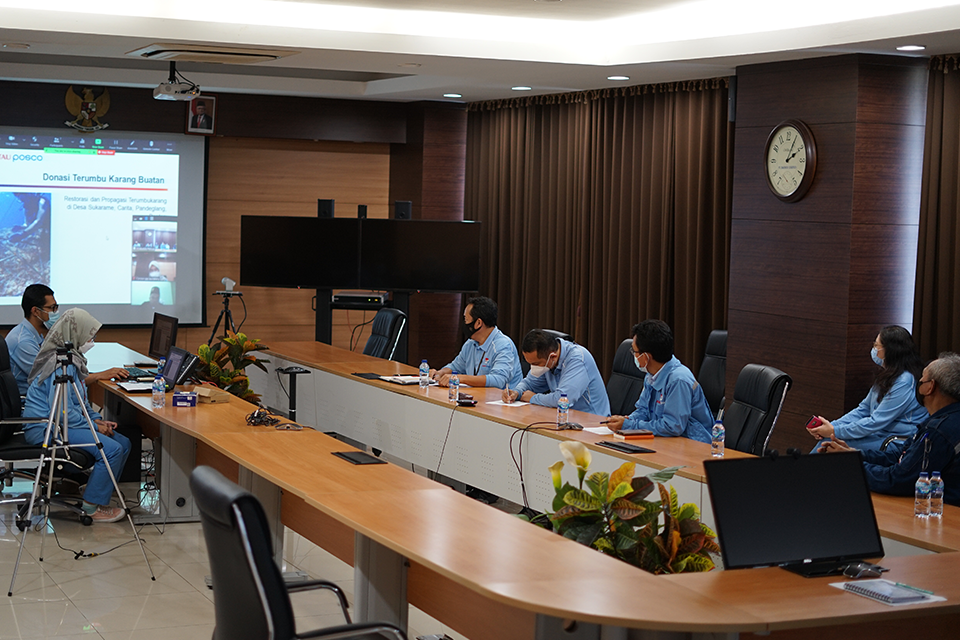 POSCO has placed Triton at thirty locations in the territorial waters of the Republic of Korea to facilitate algae growth and provide a habitat and breeding area for fish and other underwater biotas. As a manufacturing industry located directly adjacent to the coast of Java Island, Cilegon, Banten, Krakatau POSCO has also paid particular attention to Indonesia’s coastal ecosystem, especially its coral reefs.

Geographically, Indonesia has a coastline of 95,181km, the second-longest coastline in the world after Canada, with a current coral reef area of about 50,000km2. Coral reefs are a crucial ecosystem for our earth, especially in Indonesia, with more water than land. The ecological value of coral reefs comes from their utilization as a habitat, source of nourishment, nursery, and breeding ground for various ocean species. They also create a barrier to protect coasts from erosion. Coral reefs provide a variety of economic advantages to this country and its communities. Coral reefs in Indonesia could be a destination for marine tourism, especially for world diving tours. Every square kilometer of healthy coral reef can produce 60-90 tons of fish per year. This could create a huge multiplier effect for coastal economies.

Unfortunately, almost all coral reefs are under a threat of permanent damage, with only 6.7% in stable condition. The coral reefs in the Banten sea area are also in danger.

Regarding the restoration and propagation of coral reefs, Krakatau POSCO initially appointed Sukarame Village, Pandeglang, Banten as the outset location to put this prime program into action. The area of coral reef in Sukarame Village is less than one square kilometer. It is managed by a group of ecotourism guides developed by the Government Tourism Office of Pandeglang District, Loka PSPL Serang, and the Ministry of Marine Affairs and Fisheries of the Republic of Indonesia. 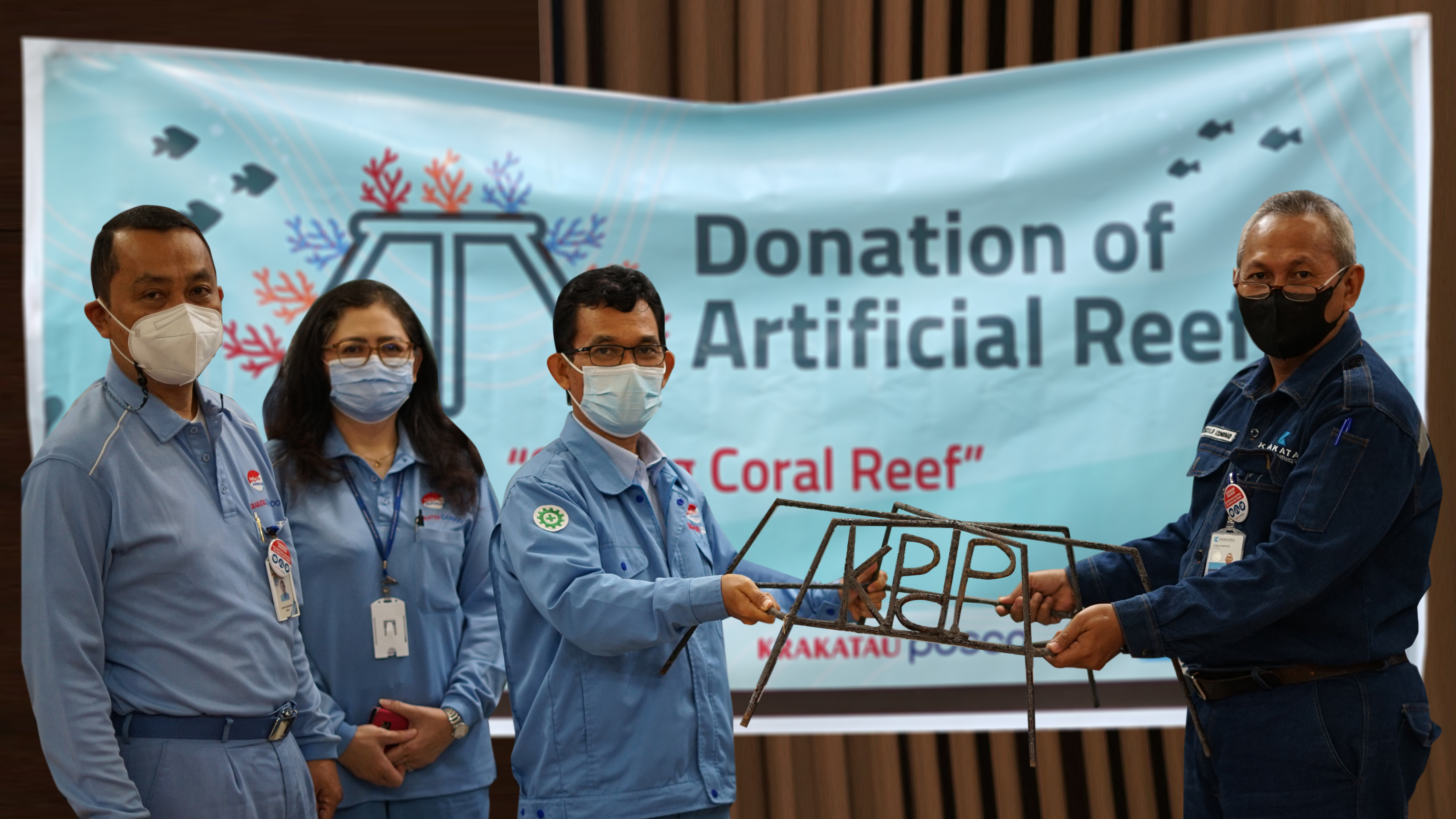 Together with one of its partner companies, PT KPdP, and the Coastal and Marine Resources Management Office (Loka PSPL) Serang, Krakatau POSCO donated a spider rack to augment hard coral through transplantation. Spider racks are made of iron and have a hexagonal shape. So they are sturdy and massive, making a great substrate and structure for new coral reefs.

Before being planted, the spider rack is coated with coral and steel slag, inspired by the functionality of the steel slag content in POSCO’s Triton. Another reason that the spider rack is coated is to accommodate reefs that prefer a rougher substrate. In the first stage, nine spider racks were planted in a seabed of Sukarame Village’s coastal area. Krakatau POSCO, together with the Coastal and Marine Resources Management Office (Loka PSPL) Serang as the scientific supervisor, monitored the growth of these spider racks into an artificial reef. Because the progress was good and healthy, the company planted another ten spider racks, and this activity will be ongoing for the benefit of underwater nature conservation. 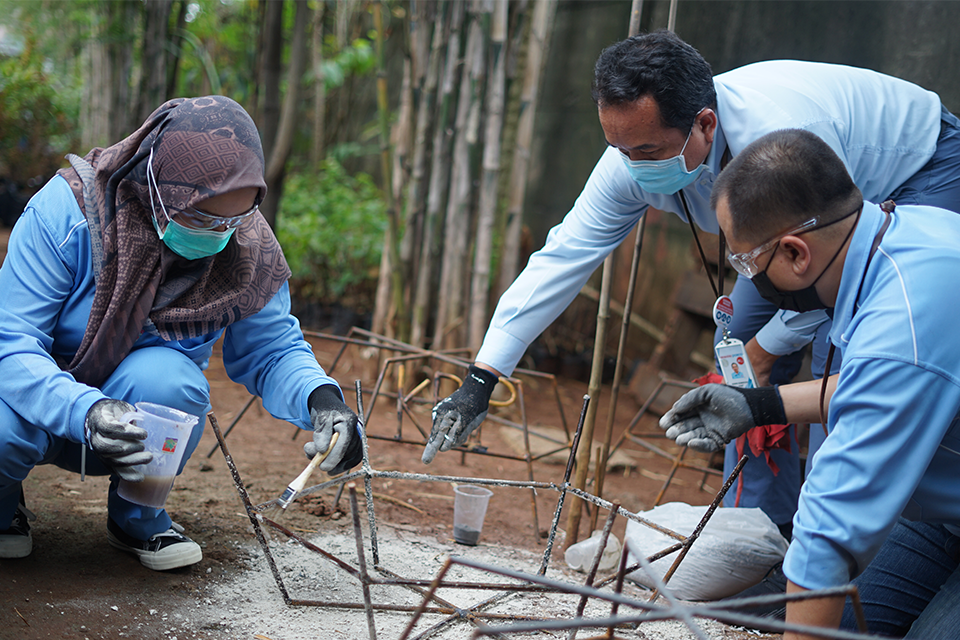 Currently, coral reef restoration and propagation processes are required to preserve the health of existing coral reefs and expand coral reef areas. This is needed so that the coral reefs can increase fisheries outputs and intensify ecotourism activities. 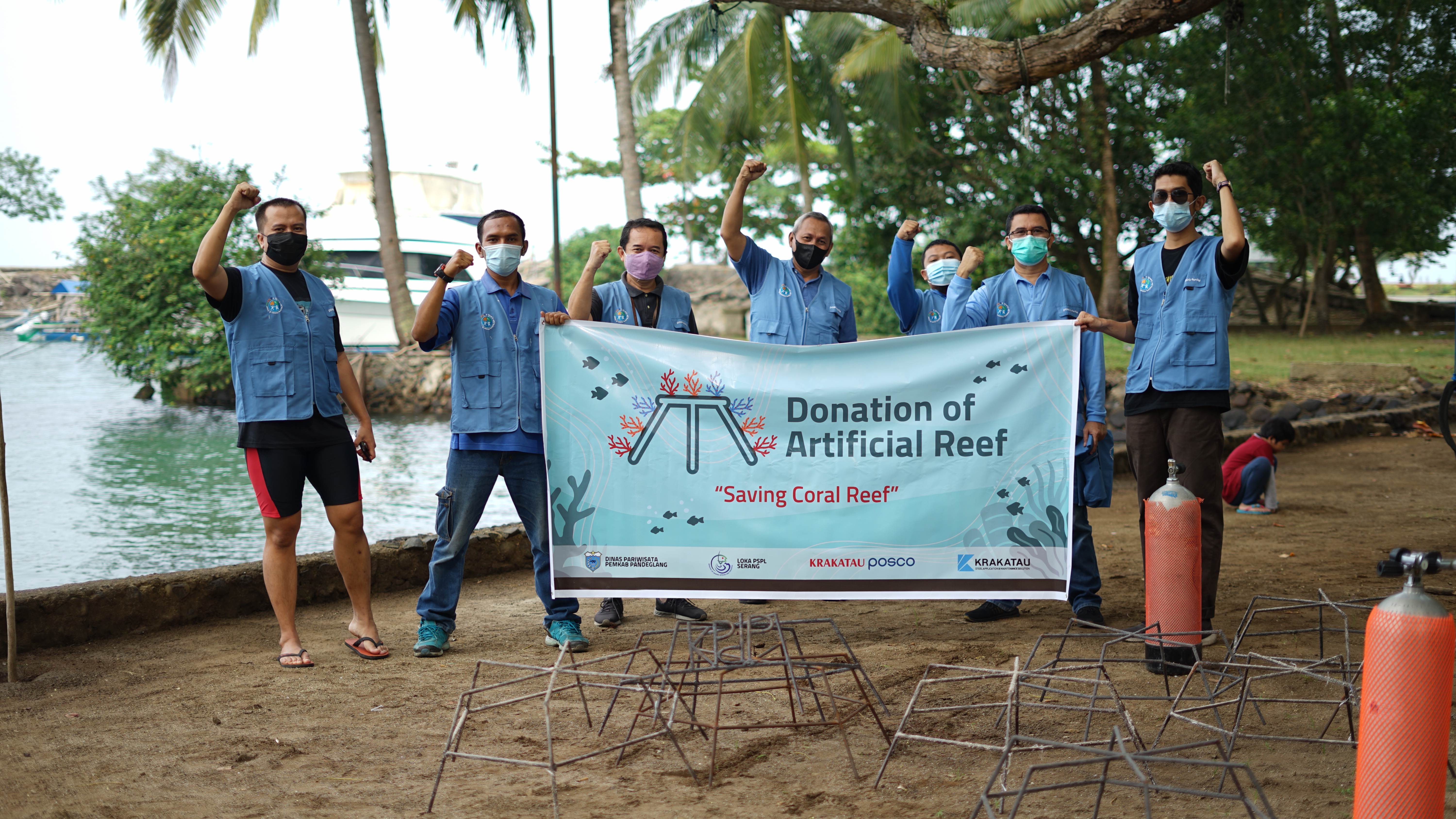 The hope is that the spider rack donation from Krakatau POSCO and the supporting company could help restore coral reefs in the Sukarame Village coastal area. This collaboration has been possible thanks to the dedication of local people who are concerned about marine biota and its importance to people’s lives. This kind of awareness is needed for fisheries to recover and be sustainable, and the enhancement of tourism and education will bring in many tourists who will help rehabilitate the local economy, supporting the local, coastal people in Indonesia to become the host of their area. This will also help speed up Indonesia’s economic recovery, especially following the pandemic.