As for POSCO’s steel business, production and sales recovered to the level prior to COVID-19, reducing the burden of fixed costs. Also, with decreased coal prices despite the rise in iron ore prices and extreme cost-cutting efforts internally, POSCO showed improved profitability in the third quarter. Improved performance from POSCO E&C and POSCO Energy’s direct import of LNG also contributed to the company’s achievement, while POSCO Chemical obtained solid results due to the increase in sales of anode and cathode materials.

POSCO succeeded in turning around within a single quarter with standalone Q3 sales reaching 6.577 trillion KRW and an operating profit of 261.9 billion KRW. The net profit recorded 180.8 billion KRW.

Despite harsh conditions posed by soaring iron ore prices, POSCO has been recording higher profitability compared to its global competitors by applying operating technology to expand the use of low-cost raw materials and reducing production costs with its smart factories. Also, by investing in overseas raw material projects, POSCO has succeeded in reducing costs, securing stable supply, and obtaining investment returns as well. So far, the company has invested in 16 raw material projects in eight countries around the world.

POSCO has strengthened its financial soundness focusing on cash flow in preparation for the unstable business environment caused by COVID-19. Due to the reduction in inventory assets, the consolidated debt to equity ratio improved to 71.8%, down 0.7% p, and cash reserves recorded 17.886 trillion KRW, which is an increase by 994.2 billion KRW QoQ. On a standalone basis, net cash reserves showed a rise of 840.3 billion KRW QoQ, amounting to 12.904 trillion KRW.

POSCO expects both sales and profitability to improve in the fourth quarter since industrial production is set to recover following the resumption of global economic activities and the expansion of economic stimulus from each government.

Meanwhile, POSCO established a new department dedicated to the sales of the materials for eco-friendly cars earlier this year to cope with the rapid advent of the new mobility era. The company also plans to reorganize its sales portfolio — focalizing on green industries such as electric vehicles, wind & solar energy, and hydrogen vehicles — and strengthen its sales activities accordingly. Additionally, POSCO plans to continue securing new growth engines for the future by expanding the production capacity of cathode and anode, secondary battery materials. 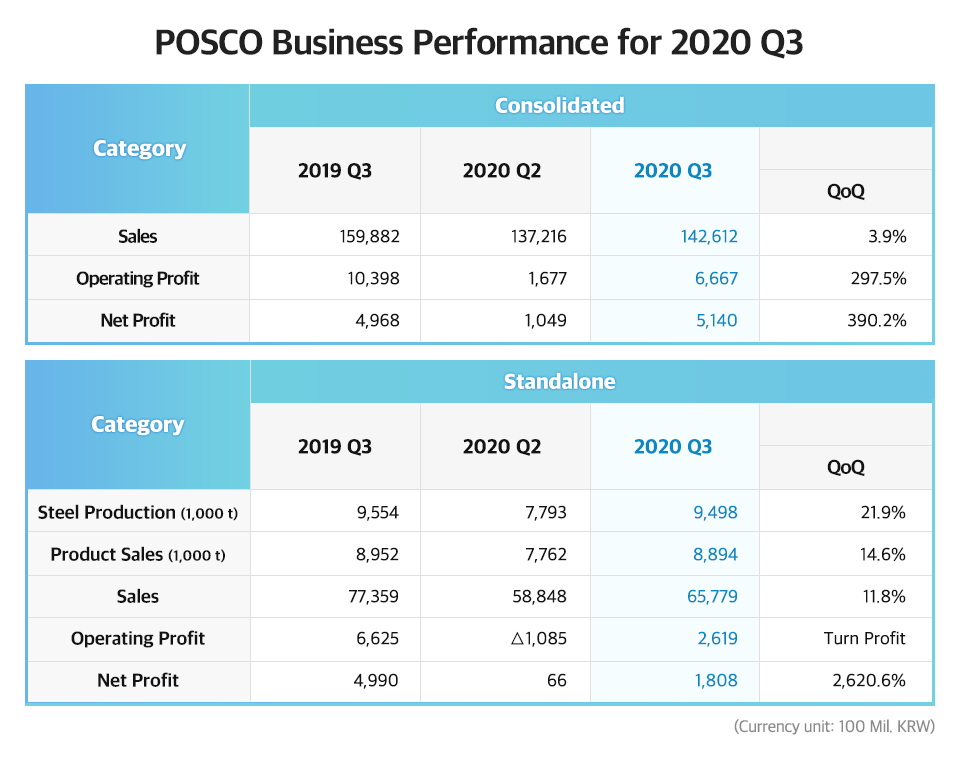