In the ‘Walking together with POSCO’s Net-zero carbon 2050 roadmap’ series, POSCO’s efforts to achieve Net-zero carbon are examined from various perspectives such as materials, technologies, products, and more. Today, as the beginning of the journey, let’s take a look at the background behind POSCO’s declaration of achieving Net-zero carbon and its plan by stages.

In December 2020, POSCO declared the achievement of ‘Net-zero Carbon’ by 2050. It is very challenging, considering the characteristics of the steel industry where CO₂ emissions are inevitable. At a time when the world is transforming into a low-carbon economy, as the saying goes, ‘Turn crisis into opportunity’, POSCO is moving forward as a leading carbon-neutral practice company by participating in technology and product innovation and social efforts to reduce carbon. 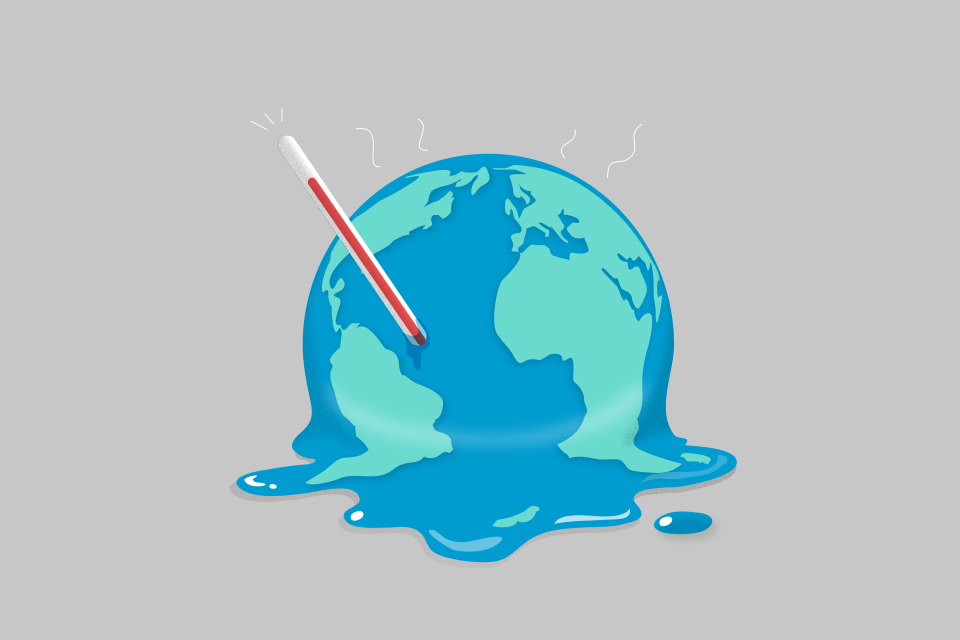 A person’s life may be at risk if the body temperature rises beyond normal body temperature to 40°C. So is the earth. Currently, the average temperature of the Earth is about 15°C, but how many °C rises from here will put Earth’s life at risk?

UN IPCC*, an organization that assesses on climate change and its implications on the Earth, warned mankind in the Paris Agreement in 2015 that if the Earth’s temperature rises by 2℃ above pre-industrial levels, Earth’s life could be in danger.

However, three years later, in October 2018, IPCC revised the 2℃ to 1.5℃, and this is the scenarios 1.5℃. The goal is to maintain the average temperature of the Earth not to rise more than 1.5℃ above pre-industrial levels by the year 2100. Since it is already 1℃ higher than in the 1850s which is before the pre-industrial level, now only 0.5℃ is left for mankind, and Net-zero carbon must be achieved by 2050 to save the Earth.

The EU, which was the first to accept the IPCC’s warning, declared in December 2019 that it would become a continent that achieves ‘Net-zero carbon by 2050’. Following the United States and Japan, Korea declared ‘Net-zero carbon by 2050’ on December 10, 2020, followed by POSCO on December 11, 2020.
*IPCC (Intergovernmental Panel on Climate Change): an intergovernmental body of the United Nations established by the World Meteorological Organization (WMO) and the United Nations Environment Program (UNEP) to evaluate global risks related to climate change and prepare international countermeasures.

Efforts for Net-zero carbon may sound like a story that is only made at the UN or government level and has nothing to do with the individuals, but the market and consumers are already moving forward quickly. Instead of internal combustion engine cars, people tend to purchase zero-emissions vehicles, and use electricity and products produced by renewable energy and renewable materials even if it is a bit expensive. Global investors have begun to select and invest in companies that will adapt well to these changes in the world and survive. The result is ‘TCFD Guidelines’. It was published in June 2017 as a framework that made it possible to easily link carbon-related information to financial disclosure data.

Discussions on the establishment of TCFD first began at the G20 Summit in December 2015, which was held right after the Paris Agreement. At that time, they dealt with ‘Net-zero carbon’ as the main agenda and established a Task Force under the Financial Stability Board to create guidelines on how to select and invest in companies that are capable of sustainable growth in line with the times. This is the ‘Task Force on Climate-related Financial Disclosures’, TCFD for short. In line with this TCFD guideline, companies appealed to investors for sustainable competitiveness, saying, “There will be negative issues such as rising costs to cope with climate change, but we will hedge carbon risks with preemptive investment and business reorganization and present a 1.5℃ roadmap to grow into a sustainable company.”

Larry Fink, the chairman of BlackRock, a giant investment company with an average stake of 7.5% in US S&P 500 companies with an operating asset amounted to 9,600 trillion won as of the end of last year, sent an annual letter to CEOs of its investment firm earlier this year, asking them to disclose their business plans to meet their goal of Net-Zero by 2050. The world’s largest asset management company has officially requested a Net-zero carbon business plan. Furthermore, BlackRock is demanding investment companies check risks by linking 1.5℃ scenarios following TCFD guidelines and reorganize their businesses by seeking new opportunities.

Wait, are the global investment groups the only business stakeholders of companies that demand Net-zero carbon? Of course not. Last year, a global IT manufacturer made headlines when it said that if a domestic semiconductor supplier did not participate in the ‘RE100’, it would turn its supply to Taiwan’s TSMC. 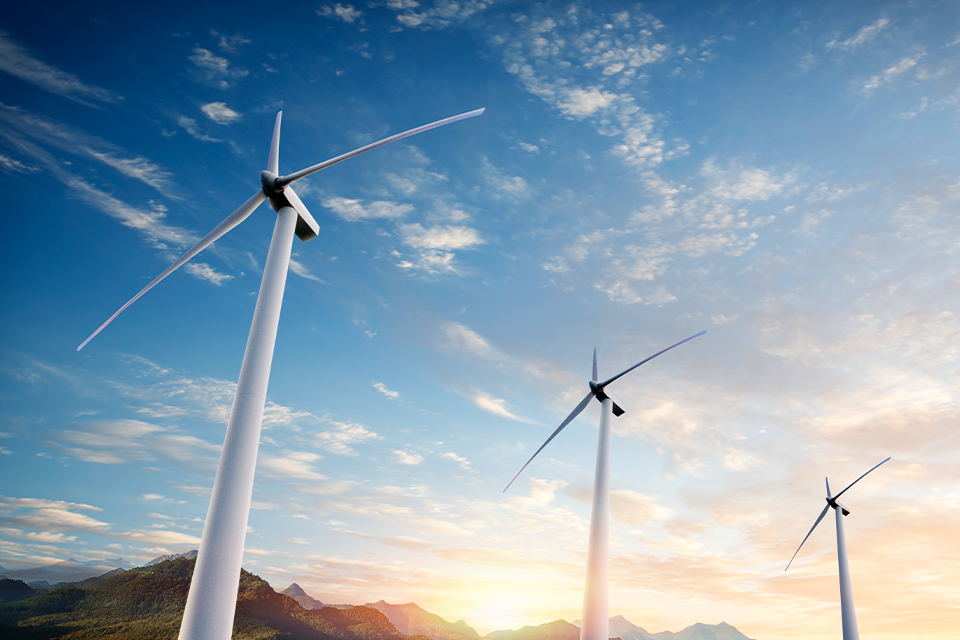 Renewable Energy 100%. In short, ‘RE100’ is a declaration to use all the electricity needed for business activities as renewable energy. In September 2014, the non-profit environmental organization The Climate Group and the British non-profit organization CDP (Carbon Disclosure Project) jointly launched the RE100 campaign for the first time. Since then, the number of RE100 participating companies has reached 298 as of early April this year, of which 53 companies, including Apple and Google, are already achieving 100% use of renewable energy.

The will to achieve Net-zero carbon at the national level is also getting stronger. In July, the EU announced that it would introduce the CBAM (Carbon Border Adjustment Mechanism)* from 2026. The concept is to impose carbon tariffs, and the plan is to require importers who import goods into the EU to submit certificates as much as carbon emissions generated by the production of the imported goods. In fact, it means that if carbon emissions are not reduced, it will be difficult to achieve competitiveness due to the increase in product prices due to tariffs.
*Carbon Border Adjustment Mechanism (CBAM): A carbon border tax is a trade tariff applied when a country with less carbon dioxide emission regulations exports goods and services to a country with strong regulations on carbon dioxide emissions.

In a situation where business stakeholders’ demands to achieve Net-zero carbon are strong, and above all, everyone’s efforts for a healthy planet are urgently needed, POSCO Group is adjusting its business to steel, secondary battery materials, and hydrogen • LNG which are core businesses linking the 1.5℃ scenarios and pursuing a business structure transformation into a ‘representative eco-friendly material company’. 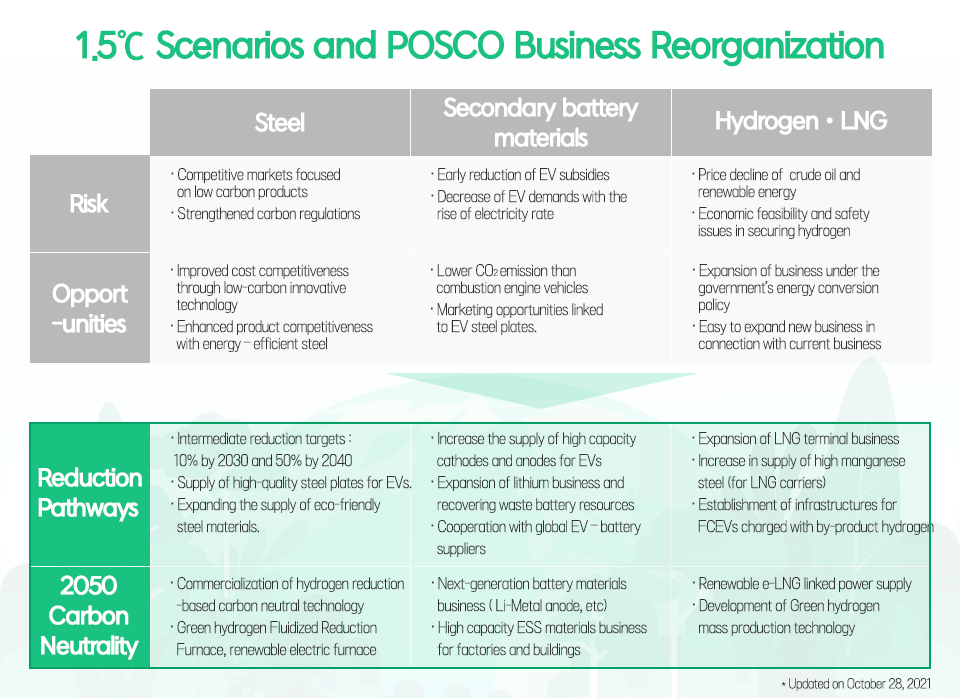 In ‘Steel’, it secures competitiveness in the era of low carbon through technology and product innovation. POSCO is preoccupying the steel material market used in eco-friendly vehicles and eco-friendly energy fields. Representative products include high-tensile steel sheets for electric vehicles, steel materials exclusively for battery packs, high-effiiciency electrical steel sheets used in electric motors, and high manganese steel for LNG transportation and storage. In the field of secondary battery materials, it is the only one in the world to have a solid supply chain ranging from secondary battery material supply, cathode and anode material production, and waste battery recycling and in the field of hydrogen and LNG, POSCO is striving to become a hydrogen company by combining the group’s capabilities with 7 million tons of hydrogen production and achieve sales of 30 trillion won in hydrogen by 2050. 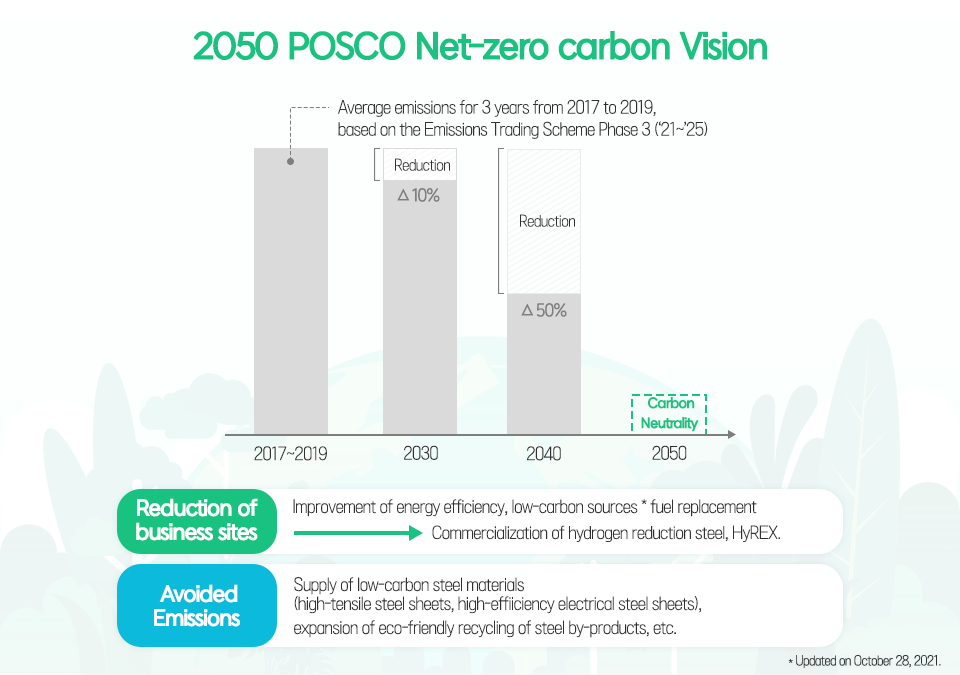 The reduction in workplaces will be achieved by stages, improving energy efficiency and replacing low-carbon fuel materials in the first stage, advancing scrap utilization and CCUS (Carbon Capture, Utilization, and storage) technology in the second stage, and developing existing FINEX-based hydrogen reduction steel technology to ultimately prevent CO2 from being generated in the steel process.

A avoided emission is a form of contributing to carbon reduction by supplying high-quality steel products, recycling steel by-products, and supplying secondary battery materials. As the management of greenhouse gas emissions per fuel or per mileage becomes important, the need for lightning transportation is increasing. As the demand for electric vehicles expands, the importance of electricity use efficiency of electric motors is also increasing, and POSCO is contributing to the reduction of greenhouse gases in the transportation sector by selling giga-level ultra-high-strength steel and ultra-high-efficiency electrical steel plates. Furthermore, based on the value chain of secondary battery materials being built by POSCO Group, it is contributing to reducing greenhouse gases by supplying lithium, cathode, and anode materials for EV batteries. In addition, it is also helping to reduce carbon in the construction/agriculture sector by supplying slag (the residue left after making iron from iron ore) generated in the blast furnace to produce cement substitutes and siliceous fertilizers.

To achieve this goal, POSCO is not only reviewing reduction goals and implementation strategies in the three decision-making bodies of the board of directors, ESG Committee, and Management Committee but also newly established and operating a carbon-neutral organization (Net-zero carbon Energy Group).

l One step for everyone

The decarbonization of steel, one of the world’s most-produced materials, is an inevitable task. Although global steel companies are rushing to announce plans to achieve Net-zero carbon by 2050, it is very challenging for private companies that have been operating with coal production methods to achieve visible results in a short period of time on their own. Cooperation is now needed for everyone’s future.

In major countries such as Europe, the United States, Japan, and China, countries and companies have already joined forces to review the Net-zero carbon process since the 2000s, and the domestic steel industry is also seeking ways to achieve Net-zero carbon. POSCO joined the Ministry of Environment’s K-EV100 (Korea’s pollution-free vehicle transition) project in February 2021 and is also promoting ‘Net Zero Research Association’ in which Hyundai Motor, SK, and more companies are participating, centered on the Korea Chamber of Commerce and Industry(KCCI). 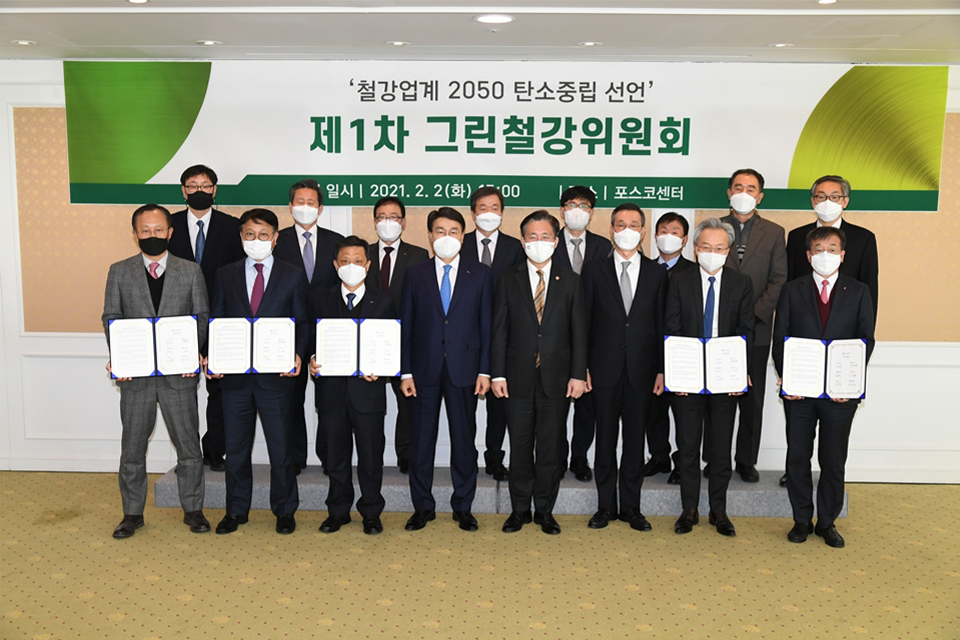 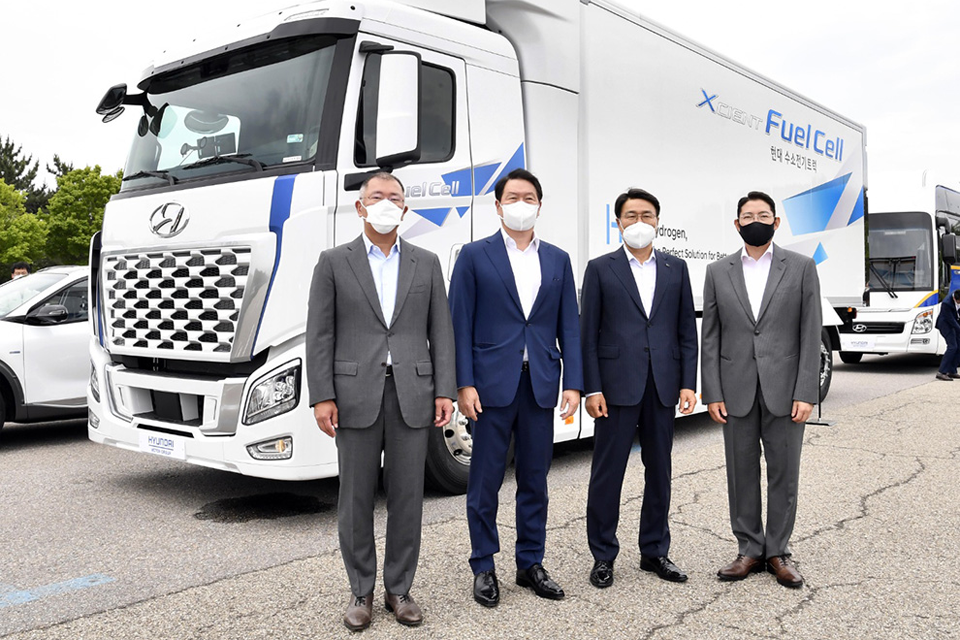 Cooperation between private companies is also actively taking place. In February, the Green Steel Committee, a collective body of industries, academic and research institutions, and government agencies in which six leading steel companies in Korea including POSCO and Hyundai Steel participated, was launched and signed the ‘Net-zero carbon Joint Declaration 2050’. Beyond the steel industry, POSCO is also participating in the ‘Korea H2 Business Summit’ with Hyundai Motor, SK Group, and Hyosung Group and has signed MOUs with global raw material suppliers Rio Tinto and Roy Hill, reducing carbon throughout the value chain. In addition, in October, POSCO held to hold Hydrogen Iron & Steel Making Forum 2021 (HyIS 2021) in cooperation with the World Steel Association (WSA) Technology & Environment Committee (TECO) and provide a venue for hydrogen – based steelmaking technology exchanges for sustainable development of the global steel industry. This is a new attempt by POSCO to present an agenda to steelmakers around the world to realize Net-zero carbon in line with the ESG trend and to lead the era of green steel. 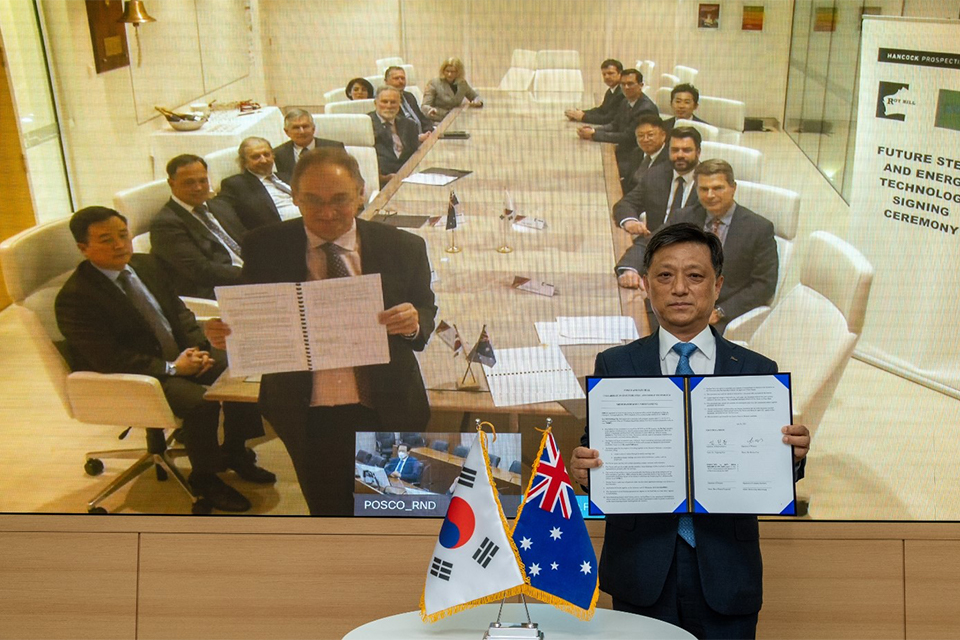 Since the announcement of the ‘2050 Net-zero carbon’ vision in December last year, POSCO’s efforts to reorganize its business linking the 1.5°C scenarios as well as present a phased and specific greenhouse gas reduction goal have shone.

The remaining time is ‘29 years’. It may seem like enough time, but it is not enough time to innovate existing businesses and technologies to achieve Net-zero carbon. In particular, the time may seem even shorter for POSCO, which produces the sixth-largest amount of iron in the world. What is needed now is to move forward, remembering that ‘a journey of a thousand miles begins with a single step. Even at this moment, POSCO’s efforts to achieve 2050 Net-zero carbon continue.