l POSCO announces its business performance in its regulatory filing on January 28
l 2020 Q4 standalone operating profit at 863.4 billion KRW — a consecutive rise since 2Q
l Profits in steel business show decrease due to COVID-19, while profits in global infrastructure business maintained the previous year record
l POSCO sets 2023 sales target of 102 Trillion KRW and aims to secure its competitiveness in the steel industry and foster global infrastructure and new growth engines for the future

On January 28, POSCO reported its 2020 business performance on a consolidated basis in its regulatory filing. POSCO’s 2020 sales totaled 57.792 trillion KRW. The company’s 2020 operating profit was at 2.403 trillion KRW with a net profit of 1.788 trillion KRW.

POSCO announced that in the previous year, the steelmaker had suffered an unprecedented management crisis due to a decline in the steel demand industry triggered by COVID-19 and a delay in reflecting increased raw material prices to product prices. However, despite the situation, POSCO’s profitability rebounded from 3Q as the company took action for preemptive emergency management, focusing on cash flow and extreme cost-cutting efforts. POSCO Group also maintained operating profit close to the record of the previous year with achievements of POSCO E&C in the construction & plant business and POSCO Energy’s direct import of LNG and expansion of the terminal-related business.

Despite the unstable business environment, POSCO has strengthened its financial soundness by maintaining its debt and debt to equity ratio similar to that of the previous year. The company has focused on cash flow and increased net cash reserves* by reducing net working capital, optimizing investment expenditure, and selling unnecessary assets. The consolidated debt improved to 20.482 billion KRW, up by 40.8 billion KRW YoY, while the consolidated debt to equity ratio recorded 65.9%, up 0.5%p YoY. Net cash reserves showed a rise of 3.901 trillion KRW YoY, amounting to 16.364 trillion KRW.

For the steel business, POSCO plans to pioneer new demands of the future, centering on mobility, steel materials for construction, and eco-friendly energy steel products, to solidify the foundation for multi-core profits. It will also maintain the competitiveness gap within the industry by establishing a production system with low cost, high quality, and high efficiency.

In global infrastructure, the company is to expand synergy between the group companies in the LNG business, establish a global sales system of 10 million tons by expanding the food business value chain and discover new business opportunities for green and digital construction and eco-friendly power generation. As for the new growth sector, POSCO plans to proactively increase the production capacity of secondary battery materials to enter the global top tier and to secure its foundation as a hydrogen specialized company in preparation for the advent of the hydrogen economy.

The consolidated sales target for this year is 59.4 trillion won, and the crude steel production and product sales targets are 37.8 million tons and 35.3 million tons, respectively. 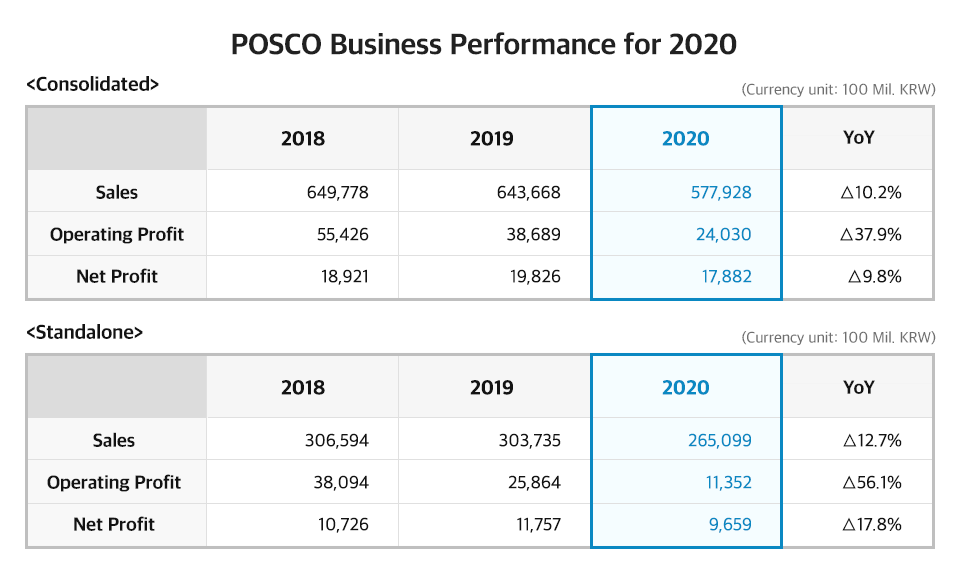