POSCO Wins the worldsteel Steelie Awards ‘Innovation of the Year’

POSCO (CEO: Jeong-Woo Choi) won the ‘Innovation of the Year’ category at the 10th Steelie Awards for its eco-friendly PosART, aka POSCO Advanced Resolution printing Technology. Hosted by the World Steel Association (worldsteel), the award ceremony was held on Oct 15 (15:00 KST) at the annual dinner of the 2019 General Assembly in Monterrey, Mexico. 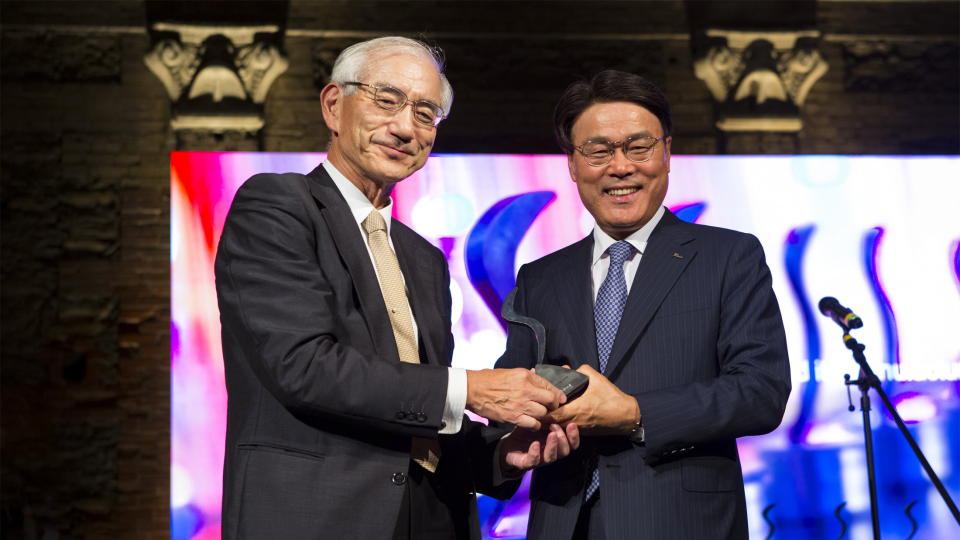 Steelie Awards assesses the contribution of member companies or individuals to the steel industry over one year in seven categories that include Innovation, Sustainability, Life Cycle Assessment, Education and Training, Journalist, etc. In those seven categories, external/internal panels are invited to judge the category and decide on the final winner evaluating candidates’ level of contribution to the steel industry.

The meaning of word PosART, POSCO’s winning technology for the innovation award this year, is two-fold — first, the POSCO Advanced Resolution printing Technology; and second, the POSCO Artistic Steel in that the technology has drastically transformed the conventional conception ‘cold and rigid’ steel into an artistic one.

PosART has a resolution four times that of the conventional print steel plate. With PosART, the full-color effect is a mission not only possible but extremely viable, hence allowing precise design and printing. Even though PosART itself is a flat 2D steel sheet, it readily brings out a 3D texture. Not only that, the ink that POSCO applies on PosART is eco-friendly that POSCO exclusively developed for that purpose.

POSCO’s journey with PosART started back in 2013. Since then, POSCO has been perfecting its technologies — from developing ink for steel printing, incorporating inkjet printing into the manufacturing process, to continuous coating technology. The company successfully transferred the technologies to POSCO C&C (POSCO Coated & Color Steel Co., Ltd), a color steel sheet manufacturer within the POSCO Group. POSCO C&C is now mass-producing PosART for the market for various purposes: high-end exterior/interior materials, exterior panels for home appliances, high-quality furniture, and nameplates, etc.

Meanwhile, POSCO CEO Jeong-Woo Choi attended the annual general assembly of the worldsteel in Monterrey, Mexico, from October 13 to 15 engaging in active discussions with the CEOs of the world’s major steel companies on the development of steel industry and various shared interests.

CEO Choi made a special presentation on POSCO’s efforts to reduce greenhouse gas and to promote cooperation with agricultural and fishery sectors — the examples of which included silicic acid fertilizer from recycled slag, and sea forests with artificial reefs received positive feedback from the worldsteel executive committee.

Founded in 1967, the World Steel Association is headquartered in Brussels, Belgium. Often abbreviated as worldsteel, it is the international trade body for the iron and steel industry. As one of the largest and most prestigious organizations in the field of steel, the core objective of worldsteel is to promote the understanding and interest of the steel industry.

Originally founded with 18 member companies across 11 countries, the worldsteel membership has since expanded to 170 steel companies/associations and research institutes around the world.